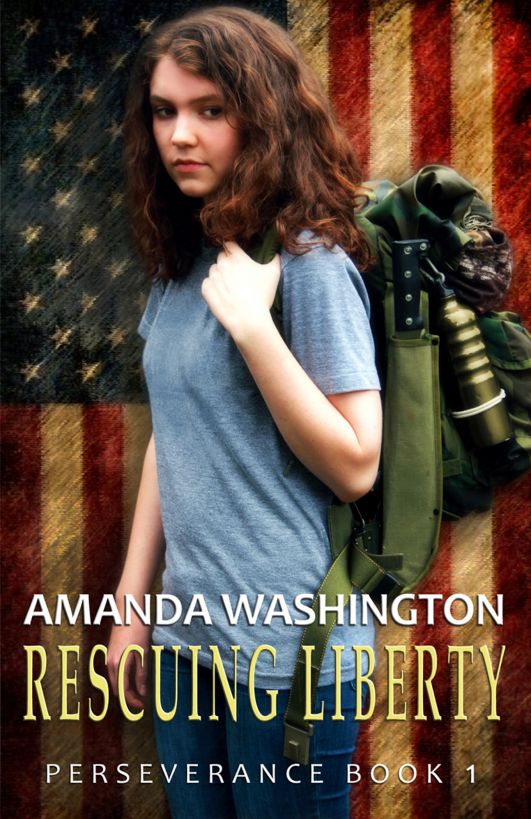 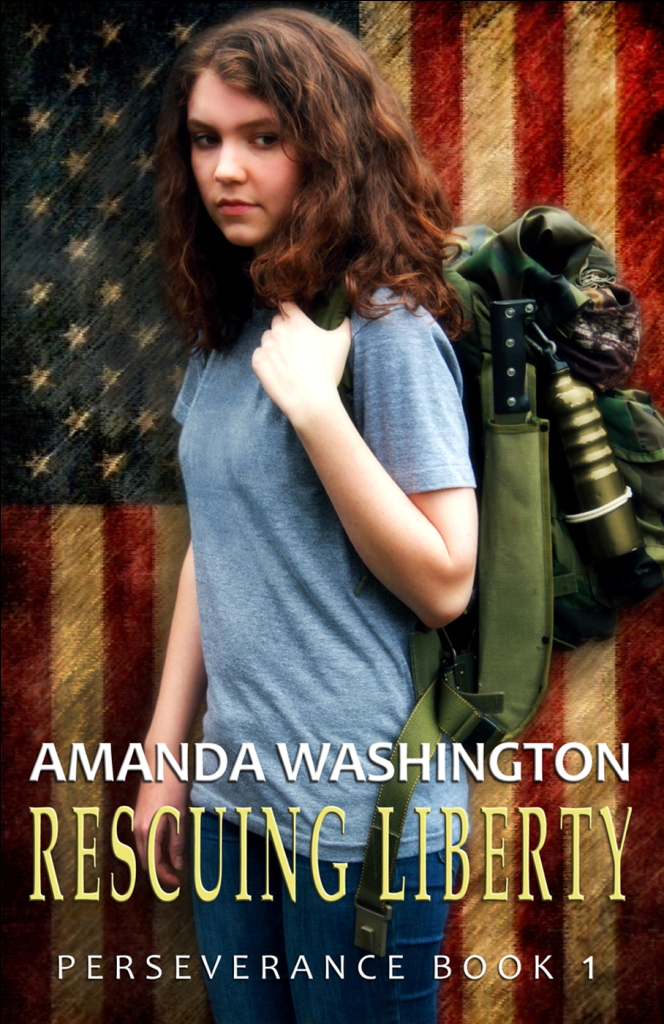 Copyright © 2009 by Amanda Washington at
Smashwords

Published in the United States

You never once told me it was impossible to
fly.

Instead you showed me how to trust God and
jump.

First and foremost I thank God—for just
being, blessing, and forgiving.

Special thanks to my sister, Apryl Risoldi,
who encouraged me to put my dreams to paper.

Without the love and encouragement of my
husband, Meltarrus, and our five sons I would have quit long ago. I
love you guys! Thank you for being there for me. Thank you also to
my parents, sisters, cousins, aunts, uncles, grandparents and
in-laws who poured support into me.

To my editors—Krista Darrach and George Hill
who poured over the story many times, and were never afraid to
point out my numerous mistakes—thank you. I couldn’t have done it
without you both! Thank you, Tracey Jackson, for your tenacious
prodding which convinced me to revisit this story long after I was
ready to give up on it.

"America will never be
destroyed from the outside. If we falter and lose our freedoms, it
will be because we destroyed ourselves."
—Abraham
Lincoln

WITH
A DAGGER
in one hand and my best friend—a Smith and Wesson Sigma—in the
other, I analyzed shadows outside the window. My red curls
haphazardly pulled through the back of a navy-blue Mariners
baseball cap, I gripped the gun and glanced at the jagged scar on
my left wrist. The memories of the day I’d carved letters
dangerously close to the artery came flooding back, reminding me:
WWL.

“
Nice warm jacket, soft-padded cell,
three square meals a day. Doesn’t sound so bad, does it?” I asked
the stuffed bear lying near my feet.

Frog—as my niece Megan lovingly named the
bear—didn’t look impressed by my wit. Frog had been well-loved, and
it showed. He was missing an eye, and the large hole in his arm was
visible around the edges of a Band-Aid. He stared up at me, looking
terrified of being left behind.

“
That’s not fair.” I nudged Frog with
my toe in an effort to redirect his gaze.

He rolled completely over, but his big brown
eye continued to play on my conscience. I sighed.

“
How do you feel about Canada?”
Tucking the gun into the back of my jeans, I reached down and
picked up the bear. “Don’t worry, Frog. Canada will be better.
Promise.”

I shoved Frog into my large hiking backpack
next to a crumpled family portrait, a few bottles of water, two
lighters, a small journal, a couple of pens, a roll of duct tape,
my worn sleeping bag, and a wind-up flashlight radio. The
flashlight radio was turned on to scan for stations daily, but so
far had found only static.

Raising my hands above my head in an attempt
to stretch, my nose scrunched at the odor assaulting me from my arm
pits. It had been days since I’d last bathed in a stream outside
Olympia, and I felt as disgusting as I smelled. My stomach growled,
reminding me of matters more essential than my neglected hygiene. I
eagerly searched the front pocket of my filthy jeans, only to
remember that the peanuts I sought had been breakfast.

A person could starve to death in this
city.

Tens of thousands already had.

My temporary shelter reeked of death and
human waste. Littering the floor, children’s toys and books lay
lonely and neglected under a thin layer of dust. The outlines of
various footprints told stories of survivors desperately searching
for something—anything.

This had once been my sister Anna’s
spotlessly clean home; now it was ransacked and damaged beyond
recognition. Just the sight of the cupboard doors hanging from
their hinges would no doubt send the obsessive-compulsive Anna into
hysterics. Only she couldn’t see the cupboards anymore. Anna had
tormented and terrorized me throughout our childhood, but she
hadn’t proven tough enough when it really counted.

Each breath is a gift.

The last time I’d been in this house was to
celebrate Thanksgiving. Only seven months ago, I sat at the
breakfast bar and obligingly chopped whatever Anna threw my
direction for the holiday dishes. Her husband, Tom, was on his
hands and knees pretending to be a horse for their two-year-old
twins, Megan and Martin. He bucked and reared as they giggled and
hooted. If I closed my eyes I could still hear their laughter.

Their bodies remained where I found
them, huddled together peacefully in Anna and Tom’s bed. No stab or
bullet wounds. No blood.
No
hope.

This had been their first house, and Anna
had turned it into a comfortable home. Family pictures littered the
place—some hanging askew on the walls, others broken and scattered
across the floor. Obscenities were carved into the coated face of
their fifty-six inch flat screen TV hanging proudly on the wall.
Deep slashes ran across once overstuffed couches, and the filling
covered the floor like mounds of snow.

Lives spent collecting these material
possessions—all this crap—and none of it mattered. Nothing here had
saved my sister’s family from their fate.

Another useless tear slid down my dirty
cheek. My sister’s family was dead, and this house was their tomb.
I ground my teeth as the desire to kill those who’d desecrated it
overwhelmed me.

No. Judgment is not mine to pass.

I fought for control over my emotions, put
down the imaginary gavel, and considered the evening view outside
the window. The sun was setting on the remains of the
once-prosperous city of Olympia, Washington. Calming lines of reds
and oranges ran across the sky, contrasting with the dark, sinister
shadows on the ground.

Early June displayed an impressive amount of
greenery and flowers. Roses—unaffected by the destruction—bloomed
in every color alongside ruined buildings. Lush bushes and healthy
grass grew obliviously around strewn human remains. Nature donned a
convincing façade as it attempted to hide the passing of humankind.
Intoxicating fragrances of lilacs and hyacinths put forth a valiant
effort, but couldn’t mask the stench of decay.

I rubbed my tired eyes, slipped my backpack
over my aching shoulders, and headed for the back door. My fingers
instinctively massaged the scar on my wrist while I scrutinized the
shadows of the backyard, watching for movement. The door creaked
open and I took another deep, steadying breath, and stepped into
the dusk.

Looking back at the house, I noticed that
Tom never did get around to fixing the screen the twins destroyed.
A simple chore left undone, yet it was too much. My throat
constricted.

With a deep breath, I stuffed the memories
back behind the locked door in my mind. I’d open it someday when I
was ready to welcome the madness, but not today. Even now I could
hear the nightmares knocking, taunting me with a way to ease the
pain, a way to forget.

Bowing my head, I crossed myself. No
organized “religion” had ever felt right, but this Catholic gesture
comforted me somehow. In one simple hand signal to God I confirmed
my continued belief and petitioned for His aid.

As I headed out, the gun pressed into the
small of my back. The discomfort served as a constant reminder of
the blood on my hands. “Thou shalt not murder,” the commandment
declared, and as a child, I’d been taught the biblical difference
between “kill” and “murder,” but what of self-defense? Is it more
of a slap-on-the-hand than a burn-for-eternity sentence?

Perhaps the Almighty would allow an
attorney?

Of course all the good attorneys would
already be in hell …

It’s hard to stay clean while swimming in
murky water. When it came down to kill or die, my lineage as a
child of Cain had been proven. But every day as I checked both
16-round magazines of the 9mm, I prayed. Prayed I wouldn’t have to
use a single bullet. I hated that gun, yet it was my only friend
and my most prized possession.

How did the line between right and wrong get
so blurry?

I walked until the sun breached the horizon.
Exhausted and still fighting the images I’d seen at my sisters, I
hopped a fence and slid into a small portable shed, hoping to find
a safe place to rest. Lawn care equipment and a tricycle frame were
the sole contents; nothing nefarious. While scanning the area from
the cover the shed provided, I found an apple tree. The lower
branches had been picked clean, but there were apples further up.
My stomach growled as I searched the shed for some sort of ladder.
No luck. Of course there wasn’t a ladder nearby, or some other
starving person would have found it and nabbed the rest of the
apples.

Unless this is a trap.

The thought caught me off guard. Nothing
about my surroundings was threatening; just a small backyard behind
a two-story home. A chain-linked fence bordered knee-high grass.
There were no abnormal movements or sounds. I leaned against the
wall of the shed and watched, waited and listened.

Hunger burned within me, melting my paranoia
and liquefying my patience.

With my gun still at my back, I could stick
the dagger between my teeth and scale the tree like Rambo. I’d
climbed trees as a child.

How hard can it be?

Footsteps came from the fence. I dropped
into a crouch and prayed intensely for invisibility as a boy
approached. He looked young, rough and tough, with scrawny arms,
long legs, and the awkward stance of a pre-teen. Looking around
nervously, he sneaked up to the tree and embarked on his climbing
mission, lurching and sliding as he struggled to find his footing
on the trunk. The hem of his jeans caught on a small twig and as he
kicked to free his leg, he fell to the ground with a loud thump.
Instinct kicked in, and I shuffled my feet, preparing to run out
and help him.

The voice of the
call
fell on my heart, commanding me to remain
hidden. More powerful than words, the
call
flooded my senses with understanding,
cautioning me against revealing myself to the child.

Another rugged figure came skulking from the
boy’s hiding place: a man with deep-set eyes, dark hair, and a
lean, muscular build. He moved fluidly, like a hunter. Not a hunter
of animals, though. “Hunter” was the title given to those who
escaped the burden of their conscience. They lurked in the shadows
and preyed on the defenseless.

Taming of Jessi Rose by Beverly Jenkins
Gotcha by Shelley Hrdlitschka
In the Shadow of the Cypress by Thomas Steinbeck
Pip and the Wood Witch Curse by Chris Mould
Magician by Raymond Feist
El secreto de la logia by Gonzalo Giner
Walkers (Book 1): The Beginning by Davis-Lindsey, Zelda
I Can See You by Karen Rose
Willie by Willie Nelson
Cruel Summer by Kylie Adams
Our partner