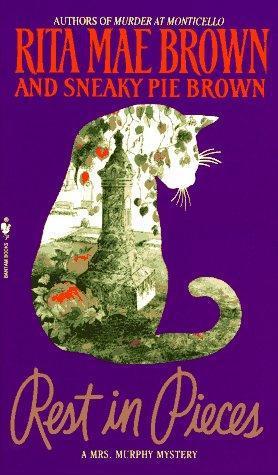 A Division of Random House, Inc.

No part of this book may be reproduced or transmitted in any form or by any means, electronic or mechanical, including photocopying, recording, or by any information storage and retrieval system, without the written permission of the publisher, except where permitted by law.

Bantam Books and the rooster colophon are registered trademarks of Random House, Inc.

Previews of The Mrs. Murphy Series

To the Beegles
and their dalmations

Mary Minor Haristeen (Harry),
the young postmistress of Crozet, whose curiosity almost kills the cat and herself

Mrs. Murphy,
Harry’s gray tiger cat, who bears an uncanny resemblance to authoress Sneaky Pie and who is wonderfully intelligent!

Blair Bainbridge,
a handsome model and fugitive from the fast lane in Manhattan. He moves to Crozet for peace and quiet and gets anything but

Mrs. George Hogendobber (Miranda),
a widow who thumps her own Bible!

Market Shiflett,
owner of Shiflett’s Market, next to the post office

Pewter,
Market’s fat gray cat, who, when need be, can be pulled away from the food bowl

Susan Tucker,
Harry’s best friend, who doesn’t take life too seriously until her neighbors get murdered

Little Marilyn Sanburne,
daughter of Mim, and not as dumb as she appears

Fitz-Gilbert Hamilton,
Little Marilyn’s husband, is rich by marriage and in his own right. His ambition sapped, he’s content to live very well and be a “gentleman lawyer”

Cabell Hall,
a trusted figure in Crozet, is preparing to retire from the bank where he is president

Ben Seifert,
Cabell Hall’s protégé, has come a long way from a callow teller to a bank officer. He was a year ahead of Harry in high school

Simon,
an opossum with a low opinion of humanity. He slowly succumbs to Harry’s kindness. He lives in the barn-loft along with a crabby owl and a hibernating blacksnake

Here’s to catnip and champagne!

Thanks to you my mailbox overflows with letters, photos, mousie toys, and crunchy nibbles. Little did I think when I started the Mrs. Murphy series that there would be so many cats out there who are readers . . . a few humans, too.

Poor Mother, she’s trying not to be a grouch. She slaves over “important themes” disguised as comedy and I dash along with a mystery series and am a hit. This only goes to prove that most cats and some dogs realize that a lighthearted approach is always the best. Maybe in a few decades Mom will figure this out for herself.

The best news is that I was able to afford my own typewriter. I found a used IBM Selectric III so I don’t have to sneak into Mother’s office in the middle of the night. I even have my own office. Do you think I should hire Pewter as a secretary?

Again, thank you, cats out there, and the dogs, too. Take care of your humans. And as for you humans, well, a fresh salmon steak would be a wonderful treat for the cat in your life.

Golden light poured over the little town of Crozet, Virginia. Mary Minor Haristeen looked up from the envelopes she was sorting and then walked over to the large glass window to admire the view. It seemed to her as if the entire town had been drenched in butter. The rooftops shone; the simple clapboard buildings were lent a pleasing grace. Harry was so compelled by the quality of the light that she threw on her denim jacket and walked out the back door. Mrs. Murphy, Harry’s tiger cat, and Tee Tucker, her corgi, roused themselves from a drowsy afternoon slumber to accompany her. The long October rays of the sun gilded the large trotting-horse weathervane on Miranda Hogendobber’s house on St. George Avenue, seen from the alleyway behind the post office.

Brilliant fall days brought back memories of hotly contested football games, school crushes, and cool nights. Much as Harry loathed cold weather, she liked having to buy a new sweater or two. At Crozet High she had worn a fuzzy red sweater one long-ago October day, in 1973 to be exact, and caught the eye of Fair Haristeen. Oak trees transformed into orange torches, the maples turned blood-red, and the beech trees became yellow, then as now. Autumn colors remained in her memory, and this would be that kind of fall. Her divorce from Fair had been final six months ago, or was it a year? She really couldn’t remember, or perhaps she didn’t want to remember. Her friends ransacked their address books for the names of eligible bachelors. There were two: Dr. Larry Johnson, the retired, widowed town doctor, who was two years older than God, and the other, of course, was Pharamond Haristeen. Even if she wanted Fair back, which she most certainly did not, he was embroiled in a romance with BoomBoom Craycroft, the beautiful thirty-two-year-old widow of Kelly Craycroft.