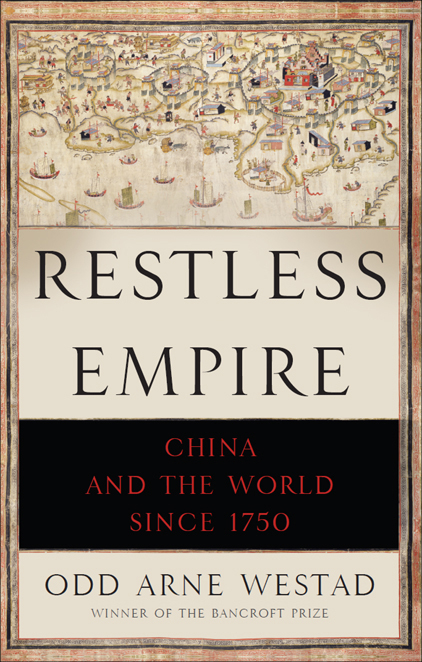 CHINA
AND THE WORLD
SINCE 1750

A Member of the Perseus Books Group
New York

All rights reserved. No part of this book may be reproduced in any manner whatsoever without written permission except in the case of brief quotations embodied in critical articles and reviews. For information, address Basic Books, 387 Park Avenue South, New York, NY 10016-8810.

Books published by Basic Books are available at special discounts for bulk purchases in the United States by corporations, institutions, and other organizations. For more information, please contact the Special Markets Department at the Perseus Books Group, 2300 Chestnut Street, Suite 200, Philadelphia, PA 19103, or call (800) 810-4145, ext. 5000, or e-mail
[email protected]
.

Typeset in Bembo Std by the Perseus Books Group

Restless empire : China and the world since 1750 / Odd Arne Westad.

For Michael
and Paula Hunt

A Note on Chinese Pronunciation

A NOTE ON CHINESE PRONUNCIATION

C
HINESE IS WRITTEN IN IDEOGRAPHIC CHARACTERS
, not letters as most Indo-European languages are. The pronunciation of these characters differs greatly among people in China, not to mention with Koreans and Japanese, who also in part use them. The character

, for instance, meaning “river,” is pronounced something like djiang in the north, kiang in central China, kang in Fujian, and gong in Cantonese.

This book uses the system of transliteration from Chinese known as
hanyu pinyin
(Chinese phonetics). The only exceptions are personal names well known in English in other transliterations, such as Chiang Kai-shek (who would be Jiang Jieshi in pinyin) or Sun Yat-sen. Developed by linguists working in Moscow in the 1930s, pinyin has become standard in the People’s Republic of China and increasingly elsewhere, replacing earlier systems. It is based on how people speak in north China.

In most cases the intuitive pronunciation of an English speaker comes close to imitating the sound as intended in pinyin. But in a few cases it is more difficult. Q is generally pronounced “ch,” x is “sh,” zh is “j” (as in Joe), and c is “ts.” Deng Xiaoping’s given name (Xiaoping) is therefore pronounced something like Shaoping. The city Chongqing is Chongching. Zhou Enlai’s surname (Zhou) is Joe. And Cixi, the empress dowager, is Tseshi. Accurate pronunciation is of course a bit more difficult than that. All Chinese characters are tonal as well, but no need to worry about that unless you want to study the language.

A
T THE BEGINNING OF THE TWENTY-FIRST CENTURY
, China is moving ever closer to the center of global affairs. As the most populous country on earth, and one of the largest, it has always commanded the attention of others, even in those rare periods in its history when it has been weak, divided, or poor. Today many Chinese and foreigners believe that China has emerged from an era of relative impotence to amass extraordinary international power. It is often predicted that within two decades it will become the world’s largest economy, overtaking the United States. The Chinese Academy of Sciences anticipates that, around that time, China will have become the world’s technological powerhouse and that it will have eradicated poverty among its more than 1.5 billion citizens, while increasing their life expectancy to eighty years.
1
Meanwhile, some, especially in neighboring countries, fear that China will strengthen its military might in order to bend others to its will.

But even though China’s economic output has soared over the past thirty years, its history indicates that the march into the future may be less unilinear than some experts would have us believe. Both the period of Communist rule and China’s deeper history—the centuries of distinctive development under imperial and dictatorial rulers—have left deep historical fissures that future leaders will have to navigate in order to reach their political, economic, and social goals. Beneath the surface of today’s frenzied quest for progress lie currents and fault lines that could take China in very different directions from those we are seeing at present. These alternative paths may be positive or negative for China and the world. But with the significance that the country has already
achieved in international affairs, we ignore the topography that made them only at our peril.

Some of this topography lies within today’s People’s Republic and some lies outside it. China’s relationships with its many neighbors and with the United States are essential to understanding its trajectories, as are the beliefs and worldviews of the Chinese people, China’s particular way of organizing the state and social affairs, and its economic and resource needs. But the boundaries between China and rest of the world are themselves not always clear or distinct. In the intersection between the internal and the external lie some of the most important aspects of China’s mental maps: borders, diasporas, ethnicities, trade, and the exchange of ideas. As often happens when dealing with great powers, the boundaries of this landscape become blurred when you look closely at them. The division lines between inner and outer fade away, and what remains is a China that is, to some extent, transnational and even global.

If border demarcations are blurred, so even more are time distinctions. The past is inscribed in China’s mental terrain in a calligraphy so powerful that it determines most of its approaches to the present. History therefore influences Chinese ways of seeing the world in a more direct sense than in any other culture I know. Today, little of this is mechanical—the Chinese do not necessarily draw explicit parallels between events of the past and those of the present. Very few Chinese—certainly of the present generation—think, for instance, about events from the Warring States period (475–221 BC) when reflecting on the current international situation. But they do carry with them concepts of justice, rules of behavior, and views of China’s place in the world that have been shaped by practices developed centuries ago. Although it is impossible to predict the future based on this past, it is necessary to understand it in order to have at least some means of navigation at hand.

Hard Ride to Hell (9780786031191) by Johnstone, William W.
The Devil Inside Me by Alexis Adaire
Heart of the Vampire (Vanderlind Castle) by Gayla Twist
Alexander Mccall Smith - Isabel Dalhousie 05 by The Comforts of a Muddy Saturday
Under the Empyrean Sky by Chuck Wendig
There is No Alternative by Claire Berlinski
The Lost Island by Douglas Preston
Double Blind by Ken Goddard
Cowgirl Up by Cheyenne Meadows
Starcross by Philip Reeve
Our partner