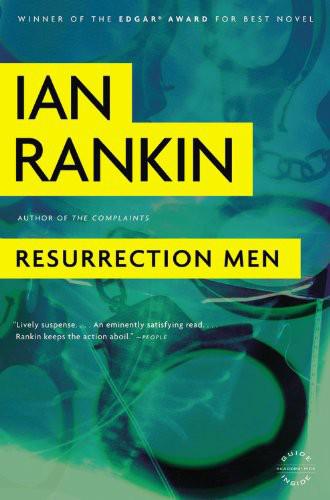 Like Edinburgh inspector John Rebus, the resurrection men of the title are treading on thin ice--they've all been sent to a short course at the Scottish Police College because they've failed in some way, generally "an issue with authority." Rebus has been known to have issues of that nature before, which only boosts his credibility with the other cops in attendance, suspected by their bosses of being on the wrong side of the fence, on the take, or even guilty of murder on several previous occasions. The dour Inspector's agenda aims to bring the higher-ups proof of the so-called Wild Bunch's nefarious activities; in the process, his own conduct in the old case he and his college classmates must rework and revisit comes under scrutiny. A solid police procedural whose protagonist, the hero of 14 other titles in this internationally acclaimed series, continues to grow on readers who are just discovering him.
--Jane Adams

Rankin's moody Inspector John Rebus, unorthodox pride of the Edinburgh police, begins this latest installment in hot water. He's been sent back to the police college for "retraining," with a group of other "resurrection men," for throwing a cup of coffee at a superior in a moment of frustration. It soon becomes clear, however, that the police brass have their own agenda for Rebus. Some of his fellow officers are suspected of being on the take, and it's his mission-should he accept it-to try to infiltrate their schemes, perhaps even encourage them. Meanwhile, a murder he and the edgy Det. Sergeant Siobhan Clarke have been investigating has turned up some curious links with an apparently Teflon crime boss Rebus has been after for years. The two cases gradually come together in Rankin's skillfully woven plotting, full of his trademark tough, oblique dialogue and sudden moments of touching warmth. The book's only drawbacks are that it seems a little overextended, and that the final bloody climax lacks something in conviction, if not in tension. This isn't one of Rankin's top efforts, but even coasting, he leaves most police procedurals at the gate.

The 'standard biography' of Rankin, a Scot, states that before becoming a full-time novelist he worked as a grape-picker, swineherd, taxman, alcohol researcher, hi-fi journalist, college secretary and punk musician.

He lives in Edinburgh with his wife Miranda and their two sons Jack and Kit.

Rankin did not set out to be a crime writer. He thought his first novels Knots and Crosses and Hide and Seek were mainstream books, more in keeping with the Scottish traditions of Robert Louis Stevenson and even Muriel Spark (the subject of Rankin's uncompleted Ph.D. thesis). He was disconcerted by their classification as genre fiction. Scottish novelist Allan Massie, who tutored Rankin while Massie was writer-in-residence at the University of Edinburgh, reassured him by saying, who would want to be a dry academic writer when "they could be John Buchan?"

Rankin's Inspector Rebus novels are set mainly in Edinburgh. They are considered major contributions to the Tartan Noir genre. Ten of the novels were adapted as a television series on ITV, starring John Hannah as Rebus in Series 1 & 2, with Ken Stott taking on the role for Series 3-5.

In 2009 Rankin stated on Radio Five Live that he would start work on a five- or six-issue run on the comic book Hellblazer, although he may turn the story into a stand-alone graphic novel instead. The Vertigo Comics panel at WonderCon 2009 confirmed that the story would be published as a graphic novel called Dark Entries, the second release from the company's new Vertigo Crime imprint.

In 2007, Rankin was criticised for saying, "the people writing the most graphic violence today are women. They are mostly lesbians as well, which I find interesting".

The “Little, Brown and Company” name and logo are trademarks of Hachette Book Group, Inc.

A NOTE ON TERMINOLOGY

Inspector John Rebus has messed up badly this time, so badly that he’s been sent to a kind of reform school for damaged cops. While there among the last-chancers known as “resurrection men,” he joins a covert mission to gain evidence of a drug heist orchestrated by three of his classmates. But the group has been assigned an unsolved murder that may have resulted from Rebus’s own mistake. Now Rebus can’t determine if he’s been set up for a fall or if his disgraced classmates are as ruthless as he suspects.

When Detective Sergeant Siobhan Clarke discovers her investigation of an art dealer’s murder is tied to Rebus’s inquiry, the protégé and mentor join forces. Soon they find themselves in the midst of an even bigger scandal than they had imagined—a plot with conspirators in every corner of Scotland and deadly implications about their colleagues.

With the brilliant eye for character and place that earned him the name “the Dickens of Edinburgh,” Ian Rankin delivers a page-turning novel of intricate suspense.

A
LSO BY
I
AN
R
ANKIN

A Good Hanging and Other Stories

Death Is Not the End (a novella)

A NOTE ON TERMINOLOGY

Scotland is divided into several police regions. Rebus works for Lothian and Borders Police, whose “beat” covers Edinburgh and most points south until you reach the English border. The region’s HQ is based at Fettes Avenue in Edinburgh, and is often referred to by officers as “the Big House.” Other main police stations in the capital include St. Leonard’s (where Rebus is normally based), Leith (the port of Edinburgh), Gayfield Square and West End.

DI Francis Gray - based in Glasgow

DS Stu Sutherland - based in Livingston

DC Allan Ward - based in Dumfries

DI Derek Linford - no friend to Rebus, disliked by Siobhan

Cynthia Bessant - friend of the deceased, also an art dealer

Ricky - manager of the Sauna Paradiso