Read Return of a Hero Online

Return of a Hero 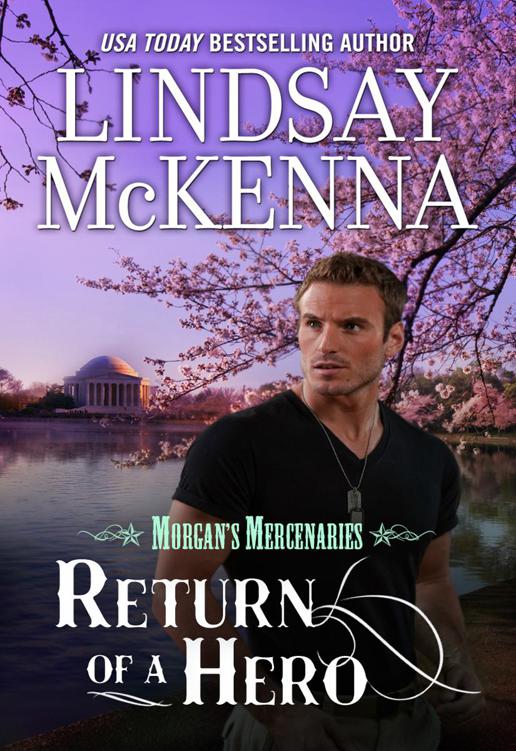 Return of a Hero

Marine captain Morgan Trayhern couldn't risk staying in the States, yet he didn't dare leave. Fragile, gutsy Laura Bennett had been injured saving his worthless skin, and a Trayhern never dodged duty. Despite the danger, he had to protect his sweet guardian angel. To his surprise, Laura's bulldog stubbornness matched his own, and her love implored him to unearth what he thought he'd forever buried on that bloody hill seven years ago. But once he faced his entire past, could he ever count on a future?

Shadows from the Past

Heart of the Storm

Excerpt from
The Loner

I
t was raining.
Or is the sky crying?
Morgan Trayhern wondered as he climbed out of the black limousine. The dawn sky above Washington, D.C., was a funereal gray, mirroring his feelings. Water ran down the planes of his tense face as he walked up a red brick path toward an old Georgian manor tucked away behind a number of sycamore and elm trees.

Fatigue lapped at Morgan as he hunched more deeply into his trench coat. Yesterday he’d received a directive from the commandant of the French Foreign Legion to report to headquarters. Orders had come from American officials, asking him to return at once to Washington for an unspecified reason. The commandant assured him that although the marine corps officials had urgently requested his presence, once the meeting was over, he could return to France and resume his duties as an officer in the Legion. Further, this unexpected trip was top secret. His commanding officer couldn’t even name the man who had issued the orders that had brought him stateside after a seven-year absence. The whole situation made Morgan apprehensive, and a nine-hour flight from France, coupled with time changes, had stripped him, leaving him raw and uneasy.

Morgan saw that the door to the manor was open. A marine corps general in a dark-green uniform filled the entranceway, peering out at him through the pall. Wrestling with his surprise and the sudden pounding of his heart, Morgan clenched one of his fists. So, General Kip Young, his commanding officer back in 1970, wanted to see him. The bastard.

As Morgan approached the door, the bulldog-jawed general with thinning gray hair beckoned him to enter. “Captain Morgan Trayhern?”

Flooded with unexpected anger, Morgan nodded. “You know it is.” Maybe his black mustache had changed his appearance more than he’d realized.

Shutting the door, the general stepped back, allowing the maid to take Morgan’s trench coat. “General Jack Armstrong is dying. As you know, he was in charge of your battalion.”

Glaring at Young, Morgan straightened his dark pin-striped jacket. “Is he dying of guilt, sir?”

“Now you look here,” Young snarled, coming within inches of him. “You keep a civil tongue in your head. Jack Armstrong saved your life seven years ago.”

A thin, cutting smile slashed across Morgan’s mouth. “And I’m supposed to be grateful for his turning me into a convenient scapegoat and purported traitor to my country so that he and all his cronies could escape the blame for Hill 164?” Morgan defiantly held Young’s steely stare.

“Even though you’re in the French Foreign Legion, I expect military courtesy from you, Captain.” Young’s square face turned scarlet. “I’m the one who sent the request to have you fly here. Jack Armstrong is my best friend, and he’s dying. There are some things he wants to get off his chest and they involve you.”

Taking a quick look around the impressive home whose walls were filled with war mementos from Armstrong’s thirty-year military career, Morgan shrugged. “I’m following orders from Commandant Gérard. I didn’t want to come, General. If I’d realized you were behind this visit—or that Armstrong wanted to talk to me—I’d have refused. As soon as this charade’s over, I’m catching a plane back to France.” His voice grew deep. “And you can keep your filthy little secret.”

“Excuse me,” a maid called to the general. “The doctor says you must hurry.”

Young made a chopping motion toward the walnut-paneled hallway. “Fourth door on the left. Jack is lucid, but Dr. Bonner says he won’t last until sundown today. Whatever your personal feelings over this, Captain, I hope you can respect the fact that he’s dying.”

Girding himself, swallowing his anger as he’d been doing for the past year, ever since he’d regained his memory of how he’d been used by Armstrong, Morgan gave a brusque nod to indicate that he understood. He followed the worried-looking maid, quickening his stride. The house was dark and shadowy. Young trailed at a safe distance as they moved down the carpeted hallway.

The maid opened the door to the master bedroom, and Morgan stood uncertainly at the entrance. His heart wouldn’t stop pounding; so many old emotions were erupting from within him. His gaze took in the room, from the cheerless brown drapes to the massive carved oak bed, where a frail, emaciated Armstrong lay. Everything was morbidly dark in this house. As Morgan stepped inside, Young edged past him and crossed to the bed. Morgan felt his stomach knot with despair.

Dr. Bonner, a robust man of middle age, slipped back into the shadows, his face grim. Young placed his hand on the shoulder of his dying friend.

The man in the bed stirred briefly. “Kip?”

Young looked over at Morgan and motioned him forward. “Yes, he’s here. He’s standing at the foot of your bed.”

His palms suddenly sweaty, Morgan had the wild urge to wipe them on the pin-striped slacks he wore. Instead he stood stiffly, watching the man in the bed. Jack Armstrong’s was the first face Morgan had seen when he’d regained consciousness in a hospital in Japan after the slaughter on Hill 164. The same razor-thin face that he had come to hate was now pinched with illness, the cheeks sunken and the skin stretched like parchment across them. Morgan took a deep breath, wanting to run as Armstrong’s lashes fluttered and finally lifted. Those once-piercing green eyes were dull as they settled on him. Morgan felt a scream starting to unwind in his gut, just as it had a year ago when he’d finally realized the truth of who he was and what Armstrong had done to him.

“Did I have a choice?” Morgan’s voice rolled through the hushed room. He saw Young shoot him a warning look that spoke volumes. To hell with all of them. He wasn’t going to be kind or courteous after what they’d done to him.

Reluctantly Morgan moved to stand next to the general’s bed. “Say it, Armstrong.”

“I deserve your anger, Morgan,” he whispered. “I wanted you to know the full truth. I didn’t want to die with this on my conscience….”

Clenching his teeth, Morgan tasted the hate that had eaten at him for a year. “You lied to me, Armstrong. You and whoever else was in on this scheme.”

Weakly lifting a hand, Armstrong silenced him. “The CIA persuaded us to send a company of men into an active NVA area. They said it was safe.” He took a breath, then closed his eyes for several moments before going on. “My staff and I backed the CIA appraisal of the situation. It was a chance to make a major coup.”

“You thought putting my company on Hill 164 would earn you another star,” Morgan hissed. “And it did, didn’t it?”

“Y-yes. One that I’ve worn with guilt ever since.” Armstrong opened his eyes and stared fiercely up at Morgan. “I had removed all air support to another part of Vietnam, thinking your company would be safe. I left you defenseless—but not on purpose. It was a horrible tactical error. By the time our helicopter got there, only two of you were left alive. You and Private Lenny Miles.”

“And you chose me as your scapegoat, didn’t you, Armstrong?” Though anger thrummed through Morgan, this specter on the bed before him brought out only a pathetic numbness.

“We had no choice,” Armstrong cried softly, tears welling in his eyes. “My entire staff would have been sent home in disgrace. There would have been court martials. I couldn’t see the lives of five good officers destroyed like that.” Wheezing, he sank back into the pillows, gathering strength. “A plan was brought to my attention after we found you alive. You had received massive wounds to the head and chest. By the time we got you to Japan for treatment, the doctors told us you’d sustained brain damage, as well. They didn’t think you’d survive. So we sent word to the press and our superiors that you had deserted your post, leaving your company of men open to NVA attack. I thought it would be only a matter of hours before you died. That’s why I let you be the scapegoat.”

“And what about Lenny Miles?” Morgan ground out.

“He was only slightly wounded, but he’d been on drugs, so we had him. We threatened him with court martial if he didn’t go along with our plan. Miles didn’t want to end up at a military prison, busting rocks for the next thirty years.”

“And when I managed to survive my wounds, that threw a chink into your plans, didn’t it, Armstrong?”

The general sighed. “Yes. On the suggestion of someone in the CIA, I flew to your bedside. The doctors told me you had amnesia and couldn’t recall anything about your family or past—not even your name. So, as you remember, I sat there telling you how you’d been wounded as a CIA operative behind the lines in Laos. You had no recall of 164 or losing your company of men, so you swallowed the story line.”

A harsh smile shadowed Morgan’s mouth. “I can still remember you at my bedside, filling me in on every detail, Armstrong. You gave me a new name—Morgan Ramsey. And you told me I had no family, that I was an orphan.” His voice trembled. “You gave me an entirely different life. For six years I didn’t really know who I was or what had happened to my company. I believed everything you told me, because I couldn’t remember a thing. I didn’t see a newspaper in Japan for the first three months because I was lapsing in and out of a mild coma state. By the time I could read or watch television, the furor over my ‘desertion’ and role in the destruction of my company was over.”

“After nine months in the hospital, you’d recovered sufficiently to be sent to the French Foreign Legion.”

“Where I thought I was being patriotic by becoming a CIA mole within that organization.”

“Yes.” Armstrong’s eyes watered. “And until a year ago, you didn’t really know who or what you were.”

“I lived in hell for that year,” Morgan said, an edge to his voice, “thanks to you.”

“I—I just wanted to say I’m sorry it had to be someone like you. Sometimes one good man has to be sacrificed for the good of all….” He closed his eyes.

Morgan stood, a violent storm of emotions flooding him. He watched the doctor move to the bed and pick up Armstrong’s wrist to take his pulse. Bonner looked over at him.

Judged By You (Judge Me Series) by Voois, Patricia
Bulldozed by Catt Ford
The Place of Dead Kings by Wilson, Geoffrey
My Only - Alex & Jamie by Melanie Shawn
Human to Human by Rebecca Ore
All Night Long by Madelynne Ellis
(Club Chrome MC 2) All Dogs Bite by Alexx Andria
Dorothy Eden by American Heiress
Wild Viking Princess by Anna Markland
The Trouble with Andrew by Heather Graham
Our partner