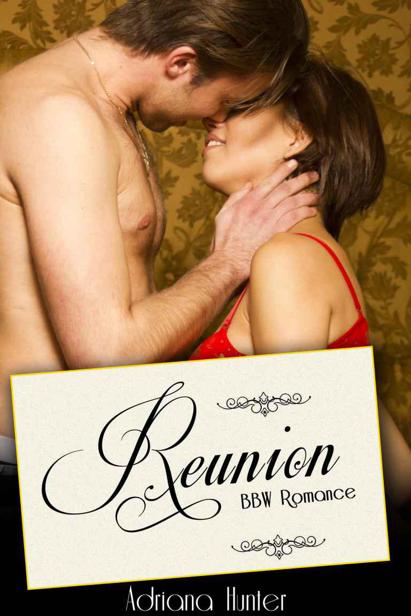 Warning:
This book is non-transferable. It is for
your own personal use only. If this book is sold, distributed, shared or given
away, it is considered an infringement of the copyright of this work and
violators will be prosecuted to the fullest extend of the law.
This is a work of fiction. All names, characters, locations and places are
solely the product of the author’s imagination. Any resemblance to actual persons,
living or dead, including events, areas, locations and situations is entirely
coincidental.

Melissa
Ryan carefully fingered the gold-lined edge of the creamy white paper as she
read through the invitation. The elegant calligraphy cordially invited her to
attend a high school reunion in her hometown of Rochester, Long Island.

She
allowed the letter to flutter from her fingers and onto the desk, where it
rested atop the stack of bills she’d pulled from the mail. Only ten minutes ago
she had stepped outside to twittering birds and a cloudless sky, the sun
shining down as if to reflect her carefree heart. She had jumped out of bed that
morning with a bounce in her step, for some reason feeling as though
today
was going to be a good day.

When
she’d spied the invitation, however, she’d promptly forgotten about the plans
she’d made for her Saturday off and rushed to her home office to tear it open.
The carefree feeling dissolved, to be replaced by a mixture of longing and
apprehension. Her high school days were long behind her—it had been nearly
ten years since she’d graduated from Rochester High, and she’d seldom looked
back. Her experiences hadn’t been necessarily unpleasant—she hadn’t been
bullied or disliked by anyone. She was just the right combination of smarts and
likeability that she could neither be labeled as a nerd nor one of the popular
girls. She’d dated seldom, partly because few of the boys interested her… and
mainly because none of them could ever really match up to her one and only crush.

An
image of Scott Parker suddenly rose up in her mind, his long, shaggy hair
pulled into a ponytail as he walked down the hallway in his button-down shirt
and stonewashed jeans,
a
blazer draped casually over
one shoulder. His hands were shoved in his pockets as he laughed at something
one of his football teammates said to him, flashing perfectly white, even
teeth. Her heart thudded in her chest, adrenaline rushing through her as if she
was still the teenager who’d watched him from around her locker door, rather
than a grown woman approaching thirty who hadn’t seen him since the day she’d
graduated.

With
a shake of her head, she banished the image from her mind. He’d been out of her
league back then, and was probably out of her league now. That more rational part
of her was what tore her in two about the invitation—on the one hand she
wanted to see him again, even after all these years, but on the other hand she
knew it would be pointless.

Glancing
at her watch, she saw that it was nearly time for her coffee date with her best
friend, Annie. She grabbed her purse, stuffed her feet into her sandals, and
snatched the letter off the desk. If anyone could help her figure out what to
do it was Annie.

Melissa
parallel parked along the curb right in front of The Sunflower, a little café
that served organic, healthy food and drinks. Annie was a vegetarian, and serious
about healthy eating. Melissa wasn’t as big on it as her, but she had to admit
the food and atmosphere were both excellent.

Annie
was waiting for her at one of the little outdoor tables, a red pair of
sunshades perched on her pert little nose. Her blonde hair was pulled back from
her heart shaped face, and she flashed her pink-tipped French nails in the
sunlight as she waved at an approaching Melissa.

“Mel!”
she greeted her, and the two women embraced. “So glad you made it. I’m ravenous
and didn’t want to order until you got here.”

“Oh
there’s no need for you to wait for me, silly.” Even as she said the word a
waiter appeared at their table as though conjured by magic, and she knew he’d
been waiting in the wings for her to arrive.

“Good
afternoon, ladies.” He dispensed menus. “Can I start you off with some drinks?”

Melissa
ordered a mocha latte with whipped cream, while Annie went with a simple
almond-banana smoothie. The waiter went off to fetch the drinks while they
mulled over the menu choices.

“So
what is it you want to talk to me about?”

Annie
smiled. “I can see from the look in your eyes and the tension in your posture
that something’s on your mind. Spill.”

Melissa
sighed and forced her shoulders to relax. Annie knew her too well. She pulled
the invitation from her purse and slid it across the table.

Annie
removed her sunshades, revealing brilliant green eyes that flicked briefly
across the paper. “Wow.
A high school reunion?
That’s
awesome!” She looked up. “Or, at least it should be awesome?”

Melissa
grimaced. “I don’t know if I should go or not.”

“Why?
Won’t there be old friends for you to see?”

Melissa
shrugged. “I haven’t spoken to any of the girls I was friends with in high
school since I left. We’ve just drifted apart through the years. You know how
it is.”

“And
yet there’s something that’s pushing you to go.” Annie set down her drink.
“High school crush?”

Melissa
grinned. “You are such a mind-reader, Annie.”

She
chuckled. “It’s not that hard to figure out. You wouldn’t be so anxious about
this whole thing if there
wasn’t
a guy involved. So,
who is he?”

“Scott
Parker. He was a football star, the guy voted most likely to succeed, and a
heartthrob in the eyes of nearly every girl in school.” She sighed. “
Ahh
, it’s no big deal. I doubt he would even remember me.”

Melissa
laughed. “We were best friends in elementary school. We did EVERYTHING
together.” She sobered. “But once we got to high school we drifted apart. He
became part of the football team and was part of the whole popular clique.”

“Ugh,
the popular clique,”
Annie
replied. “Back in my high school days that meant
football players and mean girls.”

“Oh,
he wasn’t a jerk or anything like that.” Melissa said, as Annie’s eyebrows
lifted in surprise at her sudden defense. “He was rich, smart, and talented, so
how could he not be part of the popular club, you know? My family was on the lower end of the
middle class scale so I stayed exactly where I was—on the fringes.”

“The
fringes?” Annie replied, her lips curling into a small smile. “Somehow I can’t
imagine you as being a fringe kind of girl. You’re always so outgoing.” She reached over and plucked her drink
from the table, taking a sip. “So,
tell me more about this Scott of yours.”

“He’s
hardly
my
Scott,” Melissa replied,
grinning. “Even after all these
years though, I still think about him once in a while. I guess I never really
forgot about him. I want to see him again… but I’m worried that I’ll make a
fool of myself.”

Annie
touched her hand briefly. “You won’t make a fool of yourself. You’re smart,
funny, and one of the nicest women that I have ever known. Not to mention you’re
really pretty.” Melissa brushed back a lock of curly hair self-consciously at
the compliment.

“You
should go, Mel. It’s a good opportunity to mingle with some old friends. And
I’m sure he would love to see you again, especially if you were such good
childhood friends.”

“Maybe.”
Melissa stared down at the dregs in the bottom of her latte glass. “I just feel
like I’ll be torturing myself. I’m sure he still looks like a God, whereas I’m
still the same chubby, plain girl as before. He won’t look twice at me. Besides,
it’s not like a guy like him will be single. I’m sure he has a wife, or at
least a girlfriend. Probably a string of girlfriends.”

“Seriously?
You’re beautiful! If he doesn’t see
that, then he’s obviously not worth it. But if you don’t take the chance,
you’ll never know if things could be more. Sounds to me like you missed your
chance way back then. For all you
know, if you don’t go you are losing the only chance you have left.”

“I’m
just so nervous about it.”

“I’ll
tell you what. Why don’t you let me come with you?”

Annie
tossed the invitation down on the table. “It does say that you can bring a
guest. I’ll be your wingman.”

Melissa
managed a helpless grin. “You’d really do that for me?”

“Of
course! What are friends for?” She scanned the bill that the waiter had left on
the table, tossed a few dollars down and abruptly stood up. “Okay, let’s go
shopping.”

“Yes!
We’ve got to pick out something for you to wear so you can knock his socks off.
And maybe all of his other clothes.”

Scott
Parker was sitting in his skyline office, leaning back in his leather swivel
chair as he
re-read
the invitation. He toyed with the
blood red silk tie resting against his chest as he pondered what to do.

He
was a long way from high school, from the days were he was the beloved jock,
the football star, the honors student. He’d gone on to get an MBA from Harvard,
had interned at one of the largest advertising companies in Manhattan, and then
had moved on to open his own advertising agency. He was pretty much neck and
neck with the company he had learned the ropes from now—an impressive
feat by any standard. His company had a stellar reputation, and his employees
loved their work environment. He was a resounding success.

And
yet despite all of this, he was still missing a key element in his life, the
one thing that kept him restless and unsatisfied. He was missing a woman in his
life.

It
wasn’t that he didn’t have his pick of eligible bachelorettes. He’d dated
countless numbers of beautiful, smart, talented women. They’d been very
accomplished, both in their professional lives and in the bedroom. And they’d
all been very pleased with him and would have been happy to hold onto him
forever.

But
none of them had really grabbed hold of his heart. He had been able to give
them no more than a perfunctory affection. And as a result, his last
girlfriend, Anita, had cheated on him. The discovery had shocked him; hurt him,
but not nearly as much as it would have if he had truly been in love with her.
He had let her go without a backward glance.

As
he stared at the looping calligraphy on the cream paper, his thoughts drifted
back to a happier time, a more carefree time—high school.

She was standing outside her
open locker door with a friend, the two of them giggling over something in a
celebrity teen magazine. He could see the Johnny Depp poster she’d pasted on
the inside of her locker door, as well as a little mirror she probably used to
touch up her make up.

Once Upon the End (Half Upon a Time) by Riley, James
My Life as a Man by Philip Roth
The Tiger's Lady by Skye, Christina
The Family by Marissa Kennerson
Blue Birds by Caroline Starr Rose
Plaguelands (Slayers Book 1) by Jae Hill
By the Blood of Heroes by Joseph Nassise
Seducing Sarah by Jinx Jamison
The Lightkeeper's Daughter by Colleen Coble
The Fredric Brown Megapack by Brown, Fredric
Our partner