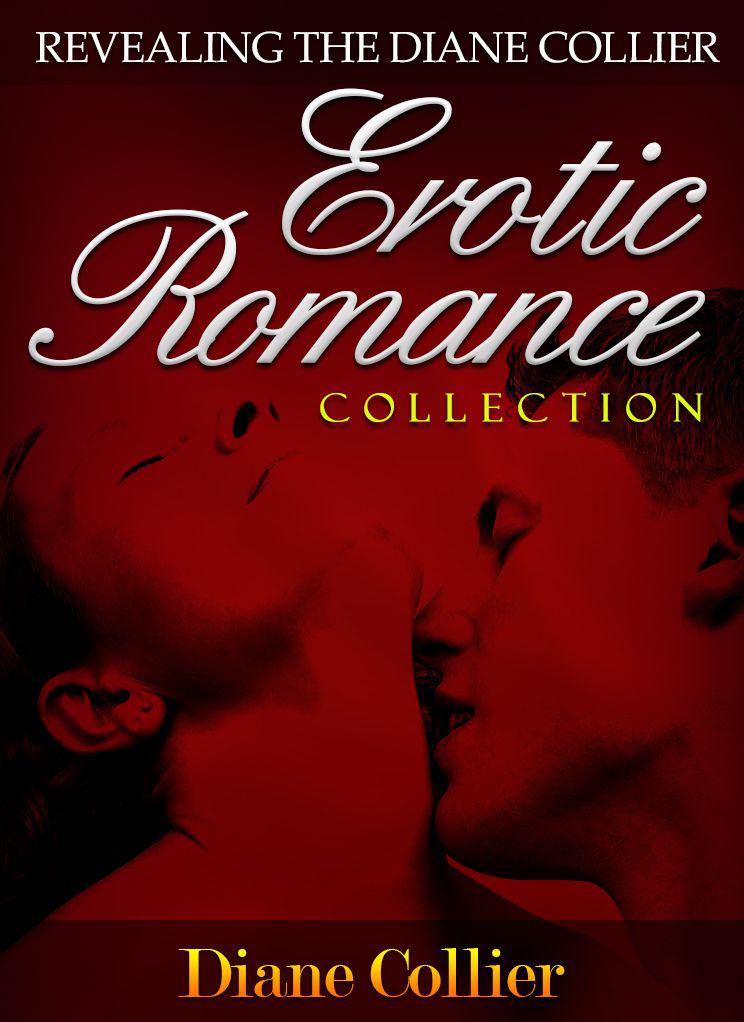 1) CLARK’S CONTROL
Desperate for a promotion, I was willing to do almost anything to impress Mr. Clark. When it came to dressing to impress, I thought I had it in the bag. Little did I know what kind of appraisal I was going to get from him at my review meeting.

2) CHRISTMAS WISH
She’d dreamt of him when she was a young girl, and hadn’t been able to get him out of her heart and mind since then, but it was impossible. He hardly knew she existed, other than as his younger sister’s friend. Until she returns home for Christmas, that is. Things are suddenly different between them.

3) THE CABIN AT THE LAKE
Brett and Julia had known each other most of their lives. Both had held a secret crush on the other at some time or another but kept it secret. Until now. The combination of water, sun, and isolation allow them to reveal their feelings and desires.

4) GOOD FENCES MAKE GOOD NEIGHBORS
Travis and Lee had lived next door to each other for several years. Their friendship had grown but both secretly held feelings for the other, keeping them hidden to protect their friendship. Finally, Travis decided to risk all, and approach Lee, showing her how much he lusted after her.

5) TIME FOR A CHANGE
Sally has had enough of the blind dates her mother keeps setting up for her. She is taken by surprise when Tony steps into her life, not a blind date, but certainly not someone she ever expected to meet.

This Kindle book contains material protected under International and Federal Copyright laws and Treaties. Any unauthorized reprint or use
of this material is prohibited.

The Cabin at the Lake

Time For A Change

I’d been working at the same insurance company for about five years and had gradually climbed the promotional ladder.
After starting there as a basic administration clerk, I now held a post where I ran a department.
It wasn’t a bad place to work.
If you could ignore the managing director, that is.
Tony Clark was a middle aged, balding executive who considered himself to be god’s gift to women and I loathed him.

I was due to meet with him that afternoon to complete an appraisal.
I was looking for another promotion and it rested solely on his judgment.
I was nervous and had tried to boost my confidence by dressing to kill, hoping that a little bit of harmless flirting and pandering to his ego would swing his vote in my direction.
We all knew about his reputation as ladies’ man, and I was quite prepared to use my feminine wiles to get the promotion and substantial increase that went with it.

I have to admit that I felt very sexy in my black linen suit with a knee-length skirt.
I was wearing black lace underwear in anticipation of going home to my husband later that evening.
For some reason, he was always very turned on by my ‘executive’ look.
I think he secretly wanted me to dominate him, but was not willing to ask.

About fifteen minutes before I was due to meet Mr. Clark, my phone rang.
I’d been deep in thought, mentally preparing myself for the appraisal and answered somewhat abruptly.
“Jenny Payne.”

“Clark here,” His response was in a crisp voice.
“I need to postpone your appraisal for a couple of hours.
I’ll see you at six?
Not a problem is it?”
This was a statement, not a question.
I wasn’t really being given a choice.

“That’s quite fine Mr. Clark.
Thanks for letting me know.
I’ll see you at six.”
Somehow I managed to hide my annoyance.
It would mean getting home well after dark, incurring yet another lecture from my husband Bruce about how my job was taking precedence over our marriage.
The reality was that he would probably be more annoyed that he had to make dinner.
I always expected him to be more understanding, since he worked for the same company and knew what Clark was like.

I dialed the number for his department and waited.
Bruce was in charge of the security for our complex, so it wasn’t unusual for him to be on two calls at once, while having a couple of people lined up to see him.
Finally he answered.

He groaned quietly into the phone.
“Not too bad, until Clark decided to change all the shifts around.
I’m going to be here until at least nine tonight.”
I pictured him rubbing a hand across his jaw, trying to erase his tiredness.
He sounded as annoyed as I felt.

“I don’t know what the hell he’s thinking.
I’m going to have to stay tonight too.
He’s pushed my meeting back until six, so I’ll probably only get home at eight or so.”
Bruce wasn’t always happy that I sometimes worked late, but I knew from his lack of response that he was distracted.
I could hear someone in the background trying to get his attention.

“Gotta go baby,” he murmured into the phone.
“See you at home later.
Order some Chinese or something later.”
Then he was gone.
I dropped the phone back into its cradle and carried on with my work.

The afternoon dragged and the staff left in drips and drabs as time went on, until finally it was six and the cleaners arrived to do their tasks.
Half an hour later and I was still waiting.
From my office I could see that Mr. Clark’s door remained shut and I presumed that he was in a meeting.
After much pacing, finger tapping and fidgeting, another hour passed and still no Clark.
I was about to go and knock on his door when I heard the elevator door open and Clark stepped out.
He made his way between the work stations and made as if to go past my office.
I heard him stop a few paces past then he stepped back and peered in.

He was wearing a white polo shirt and blue jogging bottoms.
“Ms. Payne.”
It was a statement.
“Squash match went on longer than anticipated.
Bring yourself through to my office.”

I didn’t know if I was more annoyed at the fact that I’d been sitting waiting for him to finish playing squash, or that he wouldn’t acknowledge my marital status.
After all, I’d been married for three years already, and it was common knowledge.

Nevertheless, I covered up my frustration and dutifully followed him to his office.
I watched him sink into his leather chair, partially hidden by his excessively large mahogany desk.
I took a seat opposite him, in a matching leather visitor chair.

He sat forward slightly and flicked through the pages of a file.
He reached for his glasses and slipped them on.

“Right young lady.
Important appraisal, this one.”
There was nothing like stating the obvious, or making me feel like a schoolgirl in front of the headmaster.
At twenty eight, I considered myself to be past the ‘young lady’ stage.

“Personal manager,” he muttered to himself.
“Personal manager.”
He rubbed his chin with his fingers as if trying to memorize the words.
He removed his glasses and laid them on his desk.
Sitting back in his chair, he looked at me again over his steepled fingers.
“You know there are two of you after this position?”

“Yes sir.”
My competition was Anna Something or other.
I didn’t know her well, but disliked her anyway.

“Now, both you and Miss Booth have the same qualifications and working experience.
Since I’ll be working very, very closely with the individual, I need to ensure that the successful candidate is entirely suitable for the position.”
He pierced me with a look.
“I have one concern with you Miss Payne.”
He leaned forward and I shifted slightly in my seat, uncrossing and re-crossing my legs.
I saw his eyes following my hands as I adjusted my skirt and smoothed it down.
“You’re married.”
Again, this was a statement.

“Yes, I am.”
I breathed in deeply, forcing myself to remain calm.
“May I ask the pertinence of that to this particular position?”

“Simple.
Commitment
.”
His tone was condescending.
“Miss Booth has proven her flexibility and willingness to accommodate and comply to my needs and demands thus far.
I feel that being married may… hold you back.”
I wanted to speak but he didn’t stop there.
“A lot of travelling, exhibitions, conferences and so on.
A lot of time away from home.
How will your husband feel about that.
Sometimes short notice to assist me with entertaining clients.
Will he be jealous of the time you spend with me?”

I was slow to answer as I tried to formulate a diplomatic answer.

“I need a one hundred percent commitment from you.
Convince me of that and the job could very easily be yours.”

I sat forward in my chair, my hands resting on the seat beside me.
From the direction his eyes went, I was pushing my breasts forward, revealing my cleavage to him.
I didn’t sit back, allowing him to ogle my breasts.

“Mr. Clark, my husband Bruce encourages me in my career.
He has never had a problem with the amount of overtime I already do, and will certainly have no problem in the future.”
Not all of this was true, but I wanted the promotion.
There was still a look of doubt on Clark’s face.
“If you’d like to confirm this with him you could call him.
He’s working late and will still be in his office.”

He pondered this for a moment, then reached for his phone and dialed my husband’s extension.

“Clark here,” he barked into the phone.
Bruce must have answered him.
“Got your wife here.
Doing her appraisal for the promotion.”
Again, Bruce replied.
“Yes,” Clark said, nodding.
“You can keep an eye on her at least.”
He nodded to the CCTV cameras near the ceiling behind me and I turned to look.
I saw them moving slightly and heard a slight noise as they zoomed and rotated.

“What do you think of her possible promotion?”
Again he nodded and grunted in response to whatever Bruce was saying.
“Right.
Thank you.”
He replaced the receiver.

I shifted in my seat, wanting to know what my husband could have said to my boss.
Clark watched me through narrowed eyes.

“Your husband says he’ll support you.
He knows how much you want the promotion and the extra money.”

I felt my face flush.
I was annoyed that Bruce would have mentioned the money.
Yes, we were in debt, but he shouldn’t have spoken to Clark about it.

“Miss Booth has shown her commitment on several occasions.”
Slut!
I thought to myself.
I’ll just bet she has.
“She realizes that the success of the position relies quite heavily on making my life and job less stressful.
Avoiding confrontations and so on.”
Clark pushed his chair back from the desk and beckoned to me.
“Come here Miss Payne.”