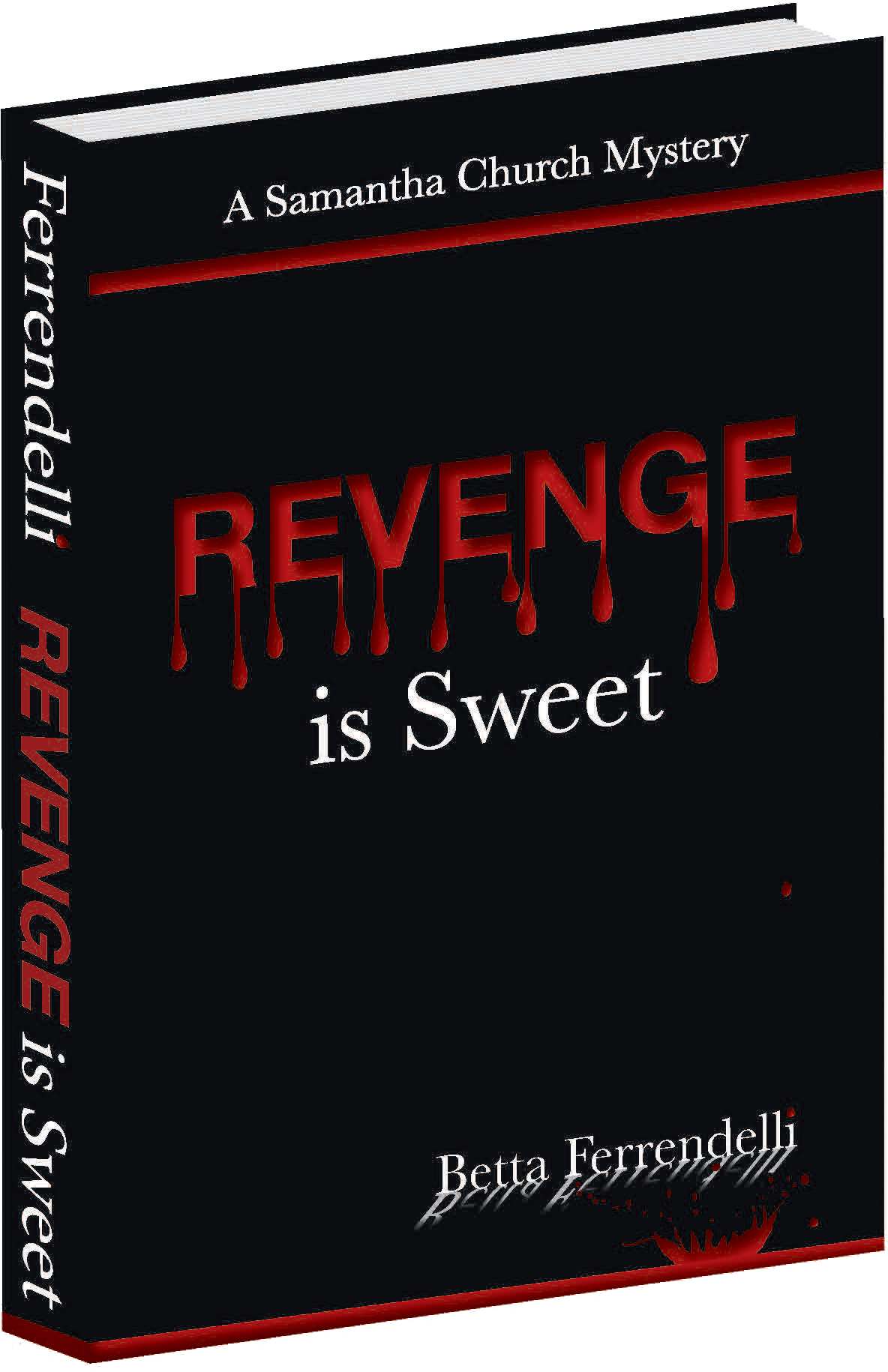 Other books by Betta Ferrendelli

What reviewers are saying about The Friday Edition

“As I normally read the standards, James Patterson, John Grisham, David Baldacci I was quite surprised and delighted to read this book. It kept me reading during a long drive and on the beach wondering what was going to happen next.”
A 4-star Amazon review

“This story had realistic characters with a protagonist that, while determined and brave at times, was not paper thin or gorgeous, and struggled with alcohol abuse throughout the novel. The mystery was great and, while I listened to the story read aloud on my kindle in my car, I found myself circling the block a few times so I could continue the story without interruption.”
A 5-star Amazon review

For my sister, Shari

In her sweet memory

Other books by Betta Ferrendelli

Connect with the author

The wind drove snow into their faces. Samantha Church stepped from the building and tried to shield her eyes with her hand. She could do nothing about the biting cold that swirled about her ankles. “Lousy weather,” she grunted, struggling to hold her purse and briefcase over her shoulder.

Wilson Cole Jr. followed Sam from the building, fighting the wind.
“Watch your step,” he said. He locked the door to the Grandview Perspective newspaper and stopped to button the top of his overcoat, squinting as he looked to the milky sky. He headed toward Sam, his head tilted to one side to avoid the wind and snow.

The amber lights in the parking lot glowed and Sam could see the snow falling fiercely, almost horizontally, when she looked into the light. They walked toward the only car left in the lot. Wilson had been driving Sam to and from work for mo
re than two weeks now since her ’66 Ford Mustang, her pride and joy, the red one she’d spent years having restored, had been destroyed.

“Thanks for the ride, Wilson,” she said and shrugged her shoulders. “I’m
sorry I know I’m bitching, but this cold weather has been relentless and it’s getting on my nerves.” She looked at him, feeling her face flush, despite the cold. “And I haven’t been in the best of moods lately.”

“You’ve been through a lot,” he said.

She slipped and nearly lost her footing.

“Careful,” he said, gently taking her arm.
They trudged a few moments in silence, their faces turned away from each other. “Besides,” Wilson said, “I’m happy to give you a ride home.”

Sam smiled despite the wind slapping against her face. “You’re just happy ’cause you’re leaving for Mexico in the morning to spend the next twelve days on the beach! But I appreciate the ride,” she said and turned her attention back to his Honda Accord, which she could hardly wait to get into.

His kindness and attention toward her never seemed to stop. She felt unspeakably grateful to him. She owed him everything. It was because of him she still had her job. It was, of course, more than that. It was because of Wilson that she was still alive and slowly getting her life back.

Wilson had wanted to go with her the night she attended her first AA meeting. Not her first meeting in the actual sense of the word, for she had attended many over the years with her sister. It was her first AA meeting
, however, to acknowledge that she was, in fact, an alcoholic. Wilson said he would wait in the car if she didn’t want him to come in. She thanked him, but said no. “I have to do this myself,” she had told him.

She remembered he nodded
, and she had thought immediately that somehow he always seemed to understand her, to nod with a knowing look in his eyes. He never questioned her and she still did not understand how he always knew what she needed to hear.

Sam often thought of that first evening she went to AA. She remembered the dark paneled walls that made the room seem smaller than it was, the single window looking out to a mature cottonwood tree. The poster over that dark paneled wall listed the recovery steps AA participants were supposed to memorize and follow if they wanted to rise above their addiction and learn to function in society without a drink in their hand.

Of course, she remembered the woman asking if there was anyone new attending the meeting that night. Sam could see herself raising her hand just high enough for the woman to see her. The woman nodded at Sam and she rose to her feet.

She remembered the faces looking at her, waiting patiently, silently for her to speak. She remembered working up the nerve, trying to swallow away the large lump of fear that had worked its way up from deep in her stomac
h before lodging in her throat, and how a fifth of scotch would help dislodge it. When Sam spoke, however, her words came without hesitation. Without stumbling.

“My name is Samantha. I am an alcoholic.”

Wilson let go of her arm as they reached his car. He opened the door for her.
“Get in, Sam,” he said. “It’ll warm up in no time.”

She shook her head. “I’ll help you clear off the snow.”

Wilson handed her a scraper. She had to use two hands to push the snow off the windows. It was a heavy, wet snow, unusual for Colorado in late January. Such snows usually came in the spring.

Wilson started the car. Exhaust rose and drifted off in a northerly direction. Wilson and Sam cleaned in silence,
their breaths rising like puffs of cumulus clouds. The wind had died down and the snow started to taper off, giving them a slight reprieve, but they did not notice.

Sam stopped suddenly, cocked her head and listened, looking off toward the end of the parking lot.

“What?” Wilson asked, looking with her in the same direction.

Sam shook her head, saying nothing, still looking around. He stopped clearing his window and listened.
“Wilson,” Sam said, her voice just above a whisper. “Someone’s watching us.”

Wilson
flashed her a skeptical look and continued pushing snow off the back window. “Sam, the lot’s empty.”

“I don’t know what it is,” she said
unconvinced. “It’s just something I’ve been feeling and it’s giving me the creeps. I know you’re going to tell me to stop imagining things.”

“I’m not going to say anything,” he said. “All I’m going to say is let’s hurry and get this done so we can get out of here and I can get you home.”

They finished clearing the windows and were about to get in the car, when three men in dark clothing rushed toward them.

Two of them ran full force into Wilson and grabbed him tightly around the arms. Wilson grunted from the force of the impact, but stayed on his feet. He tried to free himself, but the men, every bit his size, but stockier, were too strong for him. Their faces were not covered.
Wilson looked from one man who was holding him to the other man, and realized they were twins.
Latinos
, he thought, and everything about them was identical from the length of their black hair, the leather jackets they wore, to the weapons that were lodged in their shoulder holsters. Then Wilson saw another man, a white man with a full, thick dark beard, moving in Sam’s direction. “Sam!” he yelled. “Run!”

Before Sam could move, the bearded man grabbed her by the arm and struck her across the face. The keen slap echoed into the darkness.
She cried out in pain as the force of the blow knocked her backwards. She fell and hit her head on the back bumper of the car and dropped to the snowy ground.

It began to snow harder. Large flakes collected on Sam’s overcoat. Wilson willed her to move, but she remained lifeless. He heard a car approaching and turned his head toward a shiny dark sedan gliding to a stop alongside them. He watched as the rear window on the driver’s side rolled down.

Wilson squinted, trying to get a look inside, but the interior was too dark. The car door opened and a tall, lean man stepped out. He looked Latino like the twins, but his face was thin, almost gaunt, making his thick shock of dark hair look fuller.

He walked slowly toward Sam, pulling his coat collar close to his throat. As he reached her, he used the tip of his boot to lift her arm. He left it there a moment then pulled back and watched as her arm fell back lifelessly to her side.

Wilson lunged at him. “You son-of-a-bitch!” he yelled, the veins in his neck popping over his shirt collar.

One of
the twins stuck the nozzle of his gun deep into Wilson’s belly, hard enough that he groaned and stopped in his tracks. The thin man with the thick shock of dark hair waited a moment before walking deliberately toward Wilson. Standing only inches apart Wilson noticed that the man’s face was so thin it made the angle of his nose come sharply to a point and his nostrils flare angrily at the ends. A foul odor of cigarettes emanated from his breath.

The man took a step back but kept his eyes fixed on Wilson. He walked to the Accord, reached inside to pop the trunk open. He turned around,
pulled a 9mm from his waistband and trained the weapon on Wilson.

“Make another move like that,” the thin man said. “And we’ll shoot her.”

He looked at the twins, giving them a quick nod. They let go of Wilson and went for Sam. Wilson watched, helpless, as they easily lifted her off the ground and dumped her in the trunk. As they picked her up, one of her heels fell to the ground. Wilson remained still, his fists clenched at his side.

The twins stepped back from the trunk and folded their arms, waiting for further instructions. The thin man smiled slightly, pleased with the situation. He looked at Wilson.
“Take off your coat,” he said.

Wilson followed the order. The man pointed toward the open trunk with a quick flick from the nozzle of his 9mm.
“Get in,” he said.