Read Rhapsody on a Theme Online 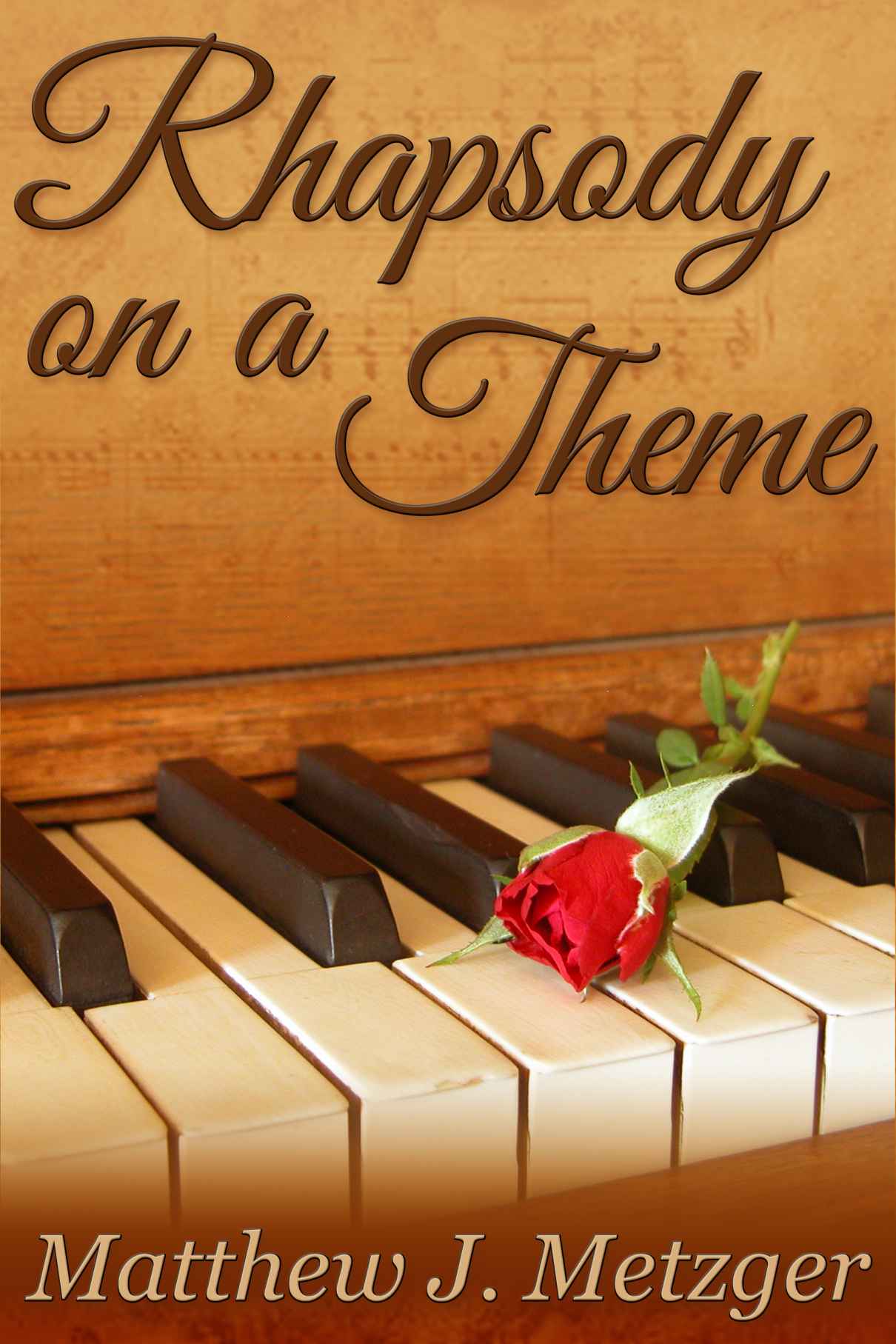 No portion of this book may be transmitted or reproduced in any form, or by any means, without permission in writing from the publisher, with the exception of brief excerpts used for the purposes of review.

This is a work of fiction. Names, characters, places and incidents are solely the product of the author’s imagination and/or are used fictitiously, though reference may be made to actual historical events or existing locations. Any resemblance to actual persons, living or dead, is entirely coincidental.

There was a fiddler on the platform when the train came in. High, shivering notes met low, shivering commuters in unusually icy December air. Frost was coming tonight, but the fiddler didn’t care. The case lay open at his feet, a yawning maw for money, and he played what he thought the milling crowd of commuters and students from the next town over wanted to hear, played the lively, and the simple, and the easy-to-enjoy. The money-making tunes that every busker knew. That which would, in theory, separate commuters from coins.

He was wrong. Not just in his assessment, but in his poise and playing. He held the bow at too wide an angle, his elbow was too lax, and his shoulder loose and easy in a way it shouldn’t have been. His hair was tidily scraped into place, and he watched the commuters, brown eyes seeking approval. His discipline was for them, not for the music, and it was the wrong way to tame the strings.

Jayden didn’t approve. The fiddler was all wrong, and far inferior to Darren’s genius when
he’d
played. He tossed a couple of coppers into the case anyway—nobody in a good situation would be busking in this weather—and jogged up the stairs over the line. It was cold. The summer had been a long, wet, and miserable creature, autumn hadn’t happened, and Christmas had arrived with the ferocity of a minor ice age. He could have stayed at home with Rachel, spent his leave from his new job on the sofa with a heavy duvet, and called Darren every evening without fail, and without having to leave the house at all. He almost regretted coming.

“Aiden, Aiden, Aiden!” something shrieked, and then the something hit his knees, bright red hair bursting out from under her woolly hat.

“Rosie!” he cheered, picking her up and letting her hug his entire face enthusiastically. She was a tiny three-year-old (nearly four, she insisted, on the occasions she remembered that four came after three) with a lingering inability (or outright refusal) to pronounce certain words, and an extreme energy that bewildered the entire family. She also, red hair aside, looked just like Dad.

“Mummy, Mummy, I got Aiden!” she screamed, and Jayden winced, carrying her back through the ticket barrier under which she’d obviously ducked, and ignoring the indulgent smiles of the platform staff. Mum beamed, held open her arms, and hugged them together, smelling of the Boots perfume counter and baking. She was warm, plump in a fluffy Christmas jumper, and her hair tickled just the way it always had, feathery and floaty. Time was frozen for the moment on Mum, and Jayden soaked up the comforting familiarity of her.

“Tiss-mas!” Rosie echoed, still cuddling Jayden’s face. He shifted her onto one arm. She would be four in the spring, and she still weighed nothing. She was tiny. “Mummy,” she whined, wriggling. “Can we go home now?”

“Not yet, poppet,” Mum said, tickling her ribs until she squirmed. Jayden struggled not to drop her. “We have to wait for Darren, don’t we?”

Jayden suppressed a smile. Rosie struggled with both their names ever since she’d learned to talk, and had eventually decided they were called Aiden and Dan. Unfortunately, even as she’d learned to speak properly, she’d stuck to her versions. They were
better
, apparently.

“Ten minutes, poppet,” Mum said. Jayden glanced up at the arrivals board. Five now, but whatever.

“…Can we come back
later
?” Rosie implored, having no grasp of what ‘ten minutes’ meant. Mostly because Mum always insisted she’d be ready in ten minutes, and took hours. Jayden remembered having the same trouble when he’d been little.

She squirmed to be let down; Jayden plonked her at their feet, and took the opportunity to hug Mum properly, and breathe that Boots-perfume-counter smell. It always reminded him of Mum. But not
everything
had remained the same as he’d first suspected, and he frowned. She’d gained weight, and he eyed her suspiciously.

“Come off it, darling. If Darren were a girl I don’t doubt I’d be a
grandmother
by now, and probably several times over,” she scoffed, and Jayden reddened.

“I’m allowed a little fun too.”

“And I didn’t want to know about what
you
were up to either,” she said tartly, and Jayden groaned, covering his face with both hands and going red. “How are the two of you, darling?”

Better
, the voice in his head supplied instantly, and it wasn’t being bitchy for once. They
were
better. Jayden had transferred to Bristol to do a degree there instead—English and History—and things had been better since then. Bristol had been…had been more like Jayden had
expected
university to be. And he had been closer to Darren, visiting every weekend. They had worked at a recovery. It wasn’t over—Darren was worse now than he had been when they were kids, unquestionably, but…

But he was also better than he had been when Jayden had been at Cambridge. Bristol had been easier. Bristol had
helped
. And Jayden had graduated this last July, and had a framed picture of him in his robe and mortar and Darren in a suit outside the students’ union. Darren had been properly smiling, and it hadn’t looked
strained
. He’d had his arm around Jayden’s hips, and they’d looked happy, because they
were
, when the depression let them be. They had been…been working with the illness, chipping away at it, and it had been working, sometimes.

But the last few months had been hard. Not long after Jayden had graduated and moved into the little house Darren and Rachel had set up for themselves in Cosham, Darren had been off to London, sent by the force on some training secondment. (Jayden didn’t know the details, because the minute Darren starting talking forensics, his brain just glazed over in a stupid haze.) And Darren had been
gone
, living in police accommodation in London since the beginning of September for three months.

It had been
hard
. Jayden had been terrified that Darren was going to get bad on his own, and Darren had been so out of reach because he’d been working ten-hour days and sleeping ten-hour nights, and…

And it was over. Jayden turned to watch his little sister duck back under the barriers and throw herself across the tiles, and watch Darren’s graceful swoop and catch, throwing her up in the air and catching her again like a sack of flour, lean and lovable in his zip-up black hoodie and blue beanie. He looked a little thinner than he had last time they had managed to meet (mid-October, for all of a day) and he was wearing his glasses instead of his contacts which was a bit unusual, but he was grinning at Rosie and slinging her about on his right arm effortlessly, blowing a loud raspberry on her neck before setting her down and fumbling for his ticket.

“Rosie, come
here
!” Mum snapped. Jayden ignored both of them and reached over the barrier to take Darren’s bag. Rosie didn’t weigh much, but Darren had struggled with picking her up since she turned three. She was just too heavy for his left shoulder. The weakness would never leave it properly.

“There’s the bastard,” Darren muttered, finding his ticket and jamming it in the correct slot. The barriers opened, and he walked right into Jayden’s grasp.

“Hello,” Jayden said simply, dragging him to one side before planting his hands on either side of Darren’s face and kissing him soundly. He tasted of spearmint and orange juice and
Darren
under the flavouring, tasted the way Jayden expected him to taste, and he pushed back into the greeting without pause, cupping a hand around the back of Jayden’s neck and another around his waist, tilting his head until their noses brushed lightly. It wasn’t often that Jayden noticed that Darren had taken an inch on him in sixth form, but he noticed it now, almost arching up into the kiss and wanting, fiercely and
desperately
, to be alone. He burned with it and wanted to clutch Darren and never let go. It was like a fog clearing, like a lightning bolt to the chest, like life itself.

“Don’t make me get a bucket of water,” Mum said fondly.

Jayden broke away, smiling broadly and rubbing his nose briefly against Darren’s before stepping back. Those beautiful green eyes were almost obscured by the pupils, blown wide at the attention, and then awareness crept back in and Darren scowled.

“It’s a promise to keep you going until later,” Jayden returned.

“That was a kiss,” Darren said.

“Aww, can’t have that,” Darren said and noisily planted a kiss on her fat cheek. “There you go, Jels.”

“Jelly!” Rosie cheered. “Mummy, can I have jelly?” she asked, twisting in Mum’s arms, distracted (as always) by the implied promise of a treat that she saw in her nickname. Mum hated it for that reason alone.

“No you can’t, poppet, we’re having tea when we get home.”

The woman at the ticket office cracked up laughing; Jayden groaned, mock-saluted, and squeezed Darren’s hand as they followed Mum and her imperious toddler out of the station towards the car park. “She’s terrible,” Jayden said.

“She’s a brat,” Darren said cheerfully. “Better than Misha was at three and a half, trust me.”

“How was your trip?” Jayden asked, swinging their joined hands lightly as they crossed the tarmac.

“Eh.” Darren shrugged. “I slept through most of it. Did a couple of extra shifts to pay off for this week’s leave. Merry Christmas, by the way,” he added, stopping at the car and pulling Jayden in by the collar of his jacket. At the last second, he ducked aside to whisper in Jayden’s ear instead of kiss him. “Your present’s for later.”

Jayden grinned, pressing a quick kiss to Darren’s mouth before he could slip away, and said, “How much later?”

“Is that a promise?”

“Mm, bit like yours,” Darren said and escaped, slipping around the other side of the car. He typically sat in the back with Rosie if they came back for a visit; apparently he was better at colouring than Jayden. (Rosie was convinced that colouring
inside
the lines was the wrong way to do things. She had Dad’s artistic ‘talent.’ And luckily for Rosie, Darren had all the artistic talent of a dead rat too, so it was a creative match made in art-hating heaven.)

Nowhere to Hide by Alex Walters
Once Upon a Power Play by Jennifer Bonds
Of Windmills and War by Diane H Moody
Bound (The Guardians) by M.J. Stevens
You're My Baby by Laura Abbot
The Tight White Collar by Grace Metalious
Kiss Me on the Inside by Janice Burkett
Goddess Sacrifice by M.W. Muse
Old Bones: A Collection of Short Stories by Steven L. Campbell
Ancient Ties by Jane Leopold Quinn
Our partner