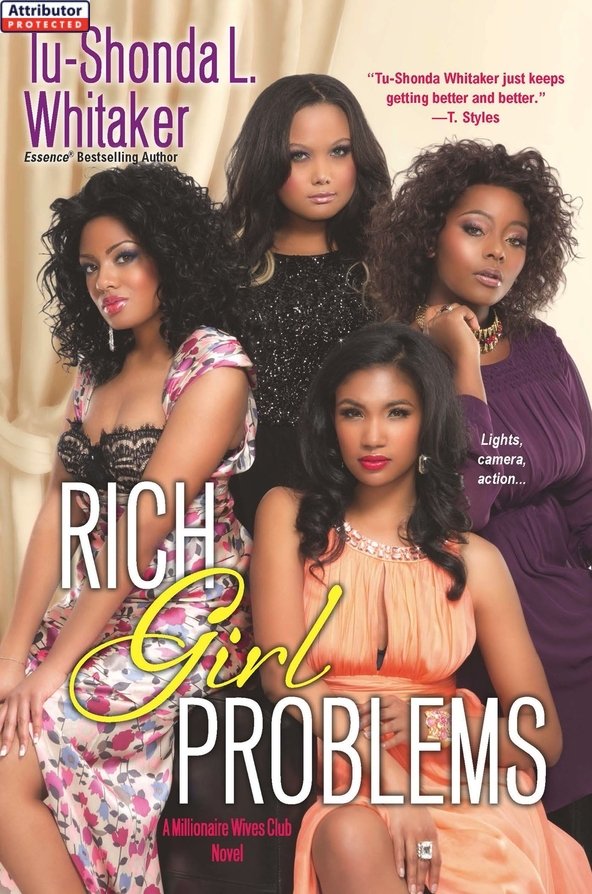 To Cairo, who always answered the phone and stayed up
with meâno matter the timeâuntil I got it right! May
God continue to bless you, may all of your dreams come
true, and may your steps continue to align and lead
you to greatness!

First and foremost I thank God for all of His many blessings!

To my husband and my children: You are truly the loves of my life! I do it all for you and I wouldn't have it any other way.

To my parents: Thank you for always having my back and for being my number one cheerleaders. There's no way I could do any of it without you.

To my family and friends: Your love and support is endless and I thank you for that.

To my agent, Sara Camilli: Thank you for being the best that any author could ever ask for!

To Selena James and Dafina Books: I thank you for all that you do, for I may have written the manuscript, but together we made this book! The best is truly yet to come!

And saving the best for last, the readers, the bookstores, social media friends, librarians, and libraries: I am humbled by your continued support of my work. Many of you have been there from the beginning, and eleven years later you're still here and I thank you for that. You all are truly a blessing to me. Please e-mail me at [email protected], follow me on Twitter @tushonda, instagram tushondalwhitaker, or Facebook at Facebook.com/tushonda.whitaker. Oh, and if you love reality TV as much as I do, then join my Trashee Tea Time Facebook page.

H
mm . . . Seems it's that time of the year again for us peons to all sip our beer and dream it's champagne, finger our glass pearls and pretend they're the sea's offspring. Why? Because the rich bitches of
Millionaire Wives Club
are
baaaaack
! And if we are to be anything like America's top rated reality show, then we'd better get it together.

But more to the point, and just so you understand my role, I'm the shopkeeper.

And these slores keep me loaded, locked, and stocked. I have four homes. A penthouse suite in the Trump Tower of midtown Manhattan. Another in Holmby Hills, California. An Aspen ski resort, and a five bedroom flat in the Seventh District of Paris, France, of course.

I have a fleet of antique cars.

And several bank accounts, all courtesy of these conniving whoresâwho want us all to think they are June Cleaver-esque mothers, stellar wives, philanthropists, and the empresses of goodness.

I'll tell you what they are.

A bunch of frauds.

The messiest slores I've ever met.

All with a bunch of fuckin' problems they manufacture for themselves. And as soon as the press gets wind of their untimely disgrace . . . what do they do? They race to their publicists and assistants to hide their pending divorces, midnight brawls, summer flings, pesky skeletons, unexpected firings, drunk and druggy children, mothers in rehab, and any other inconvenience that has muddied their red bottoms and dared to fuck up the faux lives they have worked so hard to make us to believe.

And why are they in such a hurry to do this?

Because for the last two seasons, these girls have fallen victim to the curse of reality TV, sold their souls to the devil, and sucked his dick during commercial break.

Take Milan. She wanted desperately to play the part of the angelic, sweet and sensitive, stand-by-her-man kind of woman who'd been wronged by love. When all she was, was a shifty bitch who'd spent all of her junkie ex-husband's money and left him broke, busted, and disgusted. Then she turned to Kendu, a conveniently wealthy football star who was also her costar Evan's husband. Let's not leave that out. Poor, sick, and twisted Evan, who, after learning of Kendu's affair with Milan, killed herself. Leaving Kendu free to not only marry Milan but also to happily raise Evan's daughter with Milan as if she were their own.

Now Chaunci, I'll give her some credit. Her mission was to be authentic.
Real,
as she liked to call it.
Real
as in the single mother and self-made editor-in-chief of her own
Vogue
-esque magazines and publishing company, who always spoke her mind. That kind of
real
. Yet what the cameras revealed was that this bitch was a real gnome. And underneath that frozen smile was a cold, unemotional, unforgiving, unable to commit, I-don't-know-my-daddy, catfightin' drama queen.

And Jaise, better known as Madame Bourgeois, would've never dreamed of auditioning to be an emotional bag lady. She had too many diamonds for that, spoke flawless French, was too cultured, and could point out prized antiques with her eyes closed too damn well to be deemed an emotional wrecking ball. But that's exactly who she was. A whiny trick who was dying to have a man. Got one. Married him. Yet failed miserably at being his wife. And that son of hers . . . Sweet baby Jesus. He was an oversexed and irresponsible maniac who made babies with every goddamn hood rat who came his way.

Then there was Vera. The oncologist's wife who tried her best to be the girl next door. But there was this tiny little problem with being cultivated in the projects. Yet Vera prided herself on being in control. So pulling out Vaseline and giving speeches on how she didn't bring knives to gunfights, and how she could carry a razor blade in her mouth, pressed against her cheek, and cut a bitch down in two seconds flat was never supposed to be revealed on TV. Being a reality TV starâfor Veraâwas never about being a reality TV star. It was truly about having a season-long infomercial for her tri-state full-service spa and hair care salons. Nonetheless, with her “darling I-ain't-the-one personality,” discovering her husband had a son she didn't know about, and subsequently filing for divorce on national TV . . . well . . . that just made her famous for the very thing she didn't want to be famous for. And now she was the quintessence of what every talentless little girl wanted to be: a reality TV star.

If only this could be as sweet as it was meant to be. As sweet as the first time someone said he was a fan and nervously asked for their autographs. As fabulous as the exquisite designer gowns, rare jewels, and platinum clutches they worked the red carpet in.

The epitome of rich bitch candy.

The reality TV gods either had fucked up or were fucked up. And since the gods had delivered on this cast's prayer of lights, camera, and action, the cast had no choice but to deal with what they'd prayed for.

I smiled as I stood behind the velvet rope and stanchions, among the screaming fans and hungry paparazzi, watching a single limo arrive at the gates of Manhattan's Metropolitan Club for the network's season premier party.

The limo driver opened the back door. A single stiletto stepped out, followed by another, and immediately a series of camera flashes sizzled through the air like electrified kisses as reporters vied for prime position.

The limo driver closed the door and there was only Milan standing there. I turned to one of my most trusted cameramen, Carl, and said, “Where are the rest?”

I pulled in a deep breath, eased it through the side of my lips, and cast an intense gaze over Milan, as she smiled and made love to the cameras. “Carl. Put that fame whore back in her car. Then you are to find the others, and I mean it!” I flipped my crimson-colored hair behind my golden shoulders, shook off the pricks of stress, and said to myself, “No worries, Bridget. We'll find them.”

Hide and Seek by Brown, P.S.
Why Read Moby-Dick? by Nathaniel Philbrick
Arielle and the Three Wolves (Siren Publishing Ménage Amour) by Dani April
Unknown by Unknown
No Surrender Soldier by Christine Kohler
Blood Zero Sky by Gates, J.
Sway by Zachary Lazar
Her Father, My Master: Enthralled by Mallorie Griffin
Tales Before Tolkien by Douglas A. Anderson
Cat in a Jeweled Jumpsuit by Carole Nelson Douglas
Our partner