Read Riders of the Silences Online

Riders of the Silences 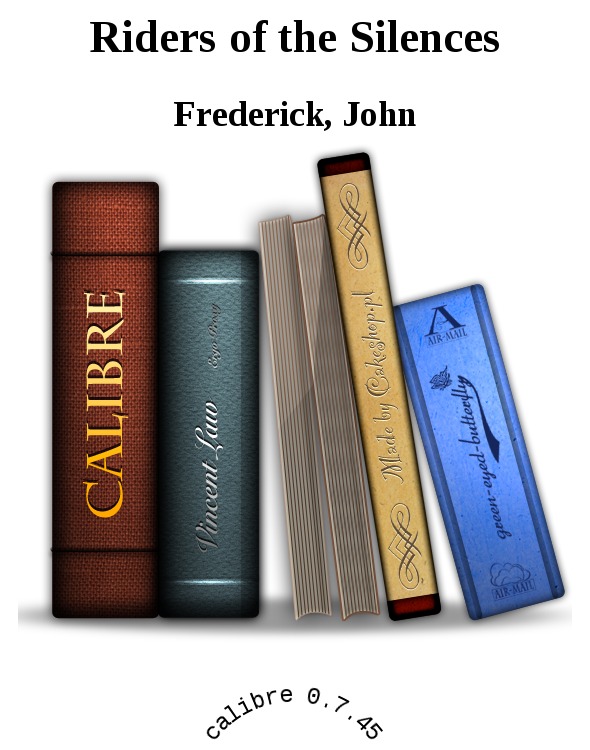 The Project Gutenberg eBook, Riders of the Silences, by John
Frederick, Illustrated by Frank Tenney Johnson

Title: Riders of the Silences

***START OF THE PROJECT GUTENBERG EBOOK RIDERS OF THE SILENCES***

[Frontispiece: Each one of them should have ridden alone to be properly
appreciated. To see them together was like watching a flock of eagles.]

RIDERS OF THE SILENCES

WITH FRONTISPIECE BY
FRANK TENNEY JOHNSON

Published by arrangement with The H. K. Fly Company

RIDERS OF THE SILENCES

CHAPTER I
THE THUNDERBOLT

It seemed that Father Anthony gathered all the warmth of the short northern
summer and kept it for winter use, for his good nature was an actual physical
force. From his ruddy face beamed such an ardent kindliness that people
literally reached out towards him as they might extend their hands toward a
comfortable fire.

All the labors of his work as an Inspector of Jesuit institutions across the
length and breadth of Canada could not lessen the flame of the good father's
enthusiasm; his smile was as indefatigable as his critical eyes. The one looked
sharply into every corner of a room and every nook and hidden cranny of thoughts
and deeds; the other veiled the criticism and soothed the wounds of vanity.

On this day, however, the sharp eyes grew a little less keen and somewhat
wider, while that smile was fixed rather by habit than inclination. In fact, his
expression might be called a frozen kindliness as he looked across the table to
Father Victor.

It required a most indomitable geniality, indeed, to outface the rigid piety
of Jean Paul Victor. His missionary work had carried him far north, where the
cold burns men thin. The eternal frost of the Arctics lay on his hair, and his
starved eyes looked out from hollows shadowed with blue. He might have posed for
a painting of one of those damned souls whom Dante placed in the frozen circle
of the "Inferno."

It was his own spirit which tortured himthe zeal which drove him north and
north and north over untracked regions, drove him until his body failed, drove
him even now, though his body was crippled.

A mighty yearning, and a still mightier self-contempt whipped him on, and the
school over which he was master groaned and suffered under his regime, and the
disciples caught his spirit and went out like warriors in the name of God to
spread the faith.

He despised them as he despised himself, for he said continually in his
heart: "How great is the purpose and how little is our labor!"

Some such thought as that curled his thin lip as he stared across at Father
Anthony like a wolf that has not eaten for a fortnight. The good father
sustained the gaze, but he shivered a little and sighed. There was awe, and
pity, and even a touch of horror in his eyes.

He said gently: "Are there none among all your lads, dear Father Victor, whom
you find something more than imperfect machines?"

The man of the north drew from a pocket of his robe a letter. His marvelously
lean fingers touched it almost with a caress, and when he spoke the softening
which could not appear in the rigid features came into his voice and made it
lower and deeper.

Father Anthony started in astonishment, as one might start to hear a divine
prophet admit a mistake, but being wise he remained silent, waiting. Jean Paul
Victor peered into space.

"Pierre Ryder. He is like a pleasant summer, and I"he clasped his colorless
hands"am frozenfrozen to the heart."

Still Father Anthony waited, but his eyes were like diamonds for brightness.

"He shall carry on my mission in the north. I, who am silent, have done much;
but Pierre sings, and he will do more. I had to fight my first battle to conquer
my own stubborn soul, and the battle left me weak for the great work in the
snows, but Pierre will not fight that battle, for I have trained him."

He repeated after a pause: "For those who sing forget themselves and their
weariness. I, Jean Paul Victor, have never sung."

He bowed his head, submitting to the judgment of God.

"This letter is for him. Shall we not carry it to him? For two days I have
not seen Pierre."

He said: "Do you deny yourself even the pleasure of the lad's company? Alas,
Father Victor, you forge your own spurs and goad yourself with your own hands.
What harm is there in being often with the lad?"

The sneer returned to the lips of Jean Paul Victor.

"The purpose would be lostlost to my eyes and lost to histhe purpose for
which I have lived and for which he shall livethe purpose to which you are
dedicated, Gabrielle Antoine Anthony."

He relented in his fierceness, and continued with the strange gentle note in
his voice: "Our love for the young, it is like a vine that climbs through the
branches of a strong tree. When the vine is young it may be taken away in safety
and both the tree and the vine will live, but if it grows old it will kill the
tree when the vine is torn away.

"I am the strong tree, and Pierre has grown into my heart. It is time that he
be torn away. He is almost ready. The work is prepared. He must start forth."

Even while he announced his purpose the sweat poured out on his forehead. He
rose and paced noiselessly up and down the bare room, his black robe catching
around the long, bony legs. Father Anthony drew a great breath. At last Jean
Paul Victor could speak again.

"In all the history of our order, there is hardly one man who will go out
armed like Pierre Ryder. He is young, he is strong, he is fearless, he is pure
of heart and single of mind. He has never tasted wine; he has never looked
wrongly on a woman."

"A prodigybut it is your work."

The whole soul of the man stood up in his eyes in a fierce triumph.

"Hear how I worked. When I first saw him he was a child, a baby, but he came
to me and took one finger of my hand in his small fist and looked up to me. Ah,
Gabrielle the smile of an infant goes to the heart swifter than the thrust of a
knife! I looked down upon him and thought many things, and I knew that I was
chosen to teach the child. There was a voice that spoke in me. You will smile,
but even now I think I can hear it."

"I swear to you that I believe," said Father Anthony, and his voice trembled.

"Another man would have given Pierre a Bible and a Latin grammar and a cell.
I gave him the testament and the grammar; I gave him also the wild north country
to say his prayers in and patter his Latin. I taught his mind, but I did not
forget his body.

"He is to go out among wild men. He must have strength of the spirit. He must
also have a strength of the body that they will understand and respect. How else
can he translate for them the truths of the Holy Spirit? Every day of his life I
have made him handle firearms. Other men think, and aim, and fire; Pierre thinks
and shoots, and has forgotten how to miss.

"He goes among wild men. These lessons must be learned. He is a soldier of
God. He can ride a horse standing; he can run a hundred miles in a day behind a
dog-team. He can wrestle and fight with his hands, for I have brought skilled
men to teach him. I have made him a thunderbolt to hurl among the ignorant and
the unenlightened; and this is the hand which shall wield it. Ha!"

A flash of cold fire came for a single instant in his eyes as he stood with
upturned face. He changed.

"Yet he is gentle as a woman. He goes out through the villages and comes back
unharmed, and after him come letters from girls and old men and dames. Even
strong men come many miles to see him and they write to him. He is known. It is
now hardly a six month since he saved a trapper from a bobcat and killed the
animal with a knife."

His heart failed him at the thought, and he murmured: "It must have been my
prayers which saved him from the teeth and the claws."

"You have described a young David. I am eager to see him. Let us go."

"Wait. Before you go you must know that he does not suspect that he differs
from other youths. Women have looked lewdly upon him and written him letters
with singing words, but Pierre being of a simple nature, he answers them briefly
and commends them to God. In fact, the flattery of women he does not understand,
and the flattery of men he thinks is mere kindliness. Are you prepared to meet
him, father?"

Father Anthony nodded, and the two went out together. The chill of the open
was hardly more than the bitter cold inside the building, but there was a wind
that drove the cold through the blood and bones of a man.

They staggered along against it until they came to a small outhouse, long and
low. On the sheltered side of it they paused to take breath, and Feather Victor
explained: "This is his hour in the gymnasium. To make the body strong required
thought and care. Mere riding and running and swinging of the ax will not
develop every muscle. So I made this gymnasium, and here Pierre works every day.
His teachers of boxing and wrestling have abandoned him."

There was almost a smile on the lean face.

"The last man left with a swollen jaw and limping on one leg."

Conscience-stricken, he stopped short, crossed himself, and then went on: "So
I give him for partners men who have committed small sins. Their penance is to
stand before Pierre and box each day for a few minutes and then to wrestle
against him. They are fierce men, these woodsmen and trappers, and big of body;
but little Pierre, they dread him like a whip of fire. One and all, they come to
me within a fortnight and beg for an easier penance."