By Train Through China

"Theroux's genius is in his clear-eyed rendition of a fresh world and the deeper observations he attaches toit." â
Chicago Tribune 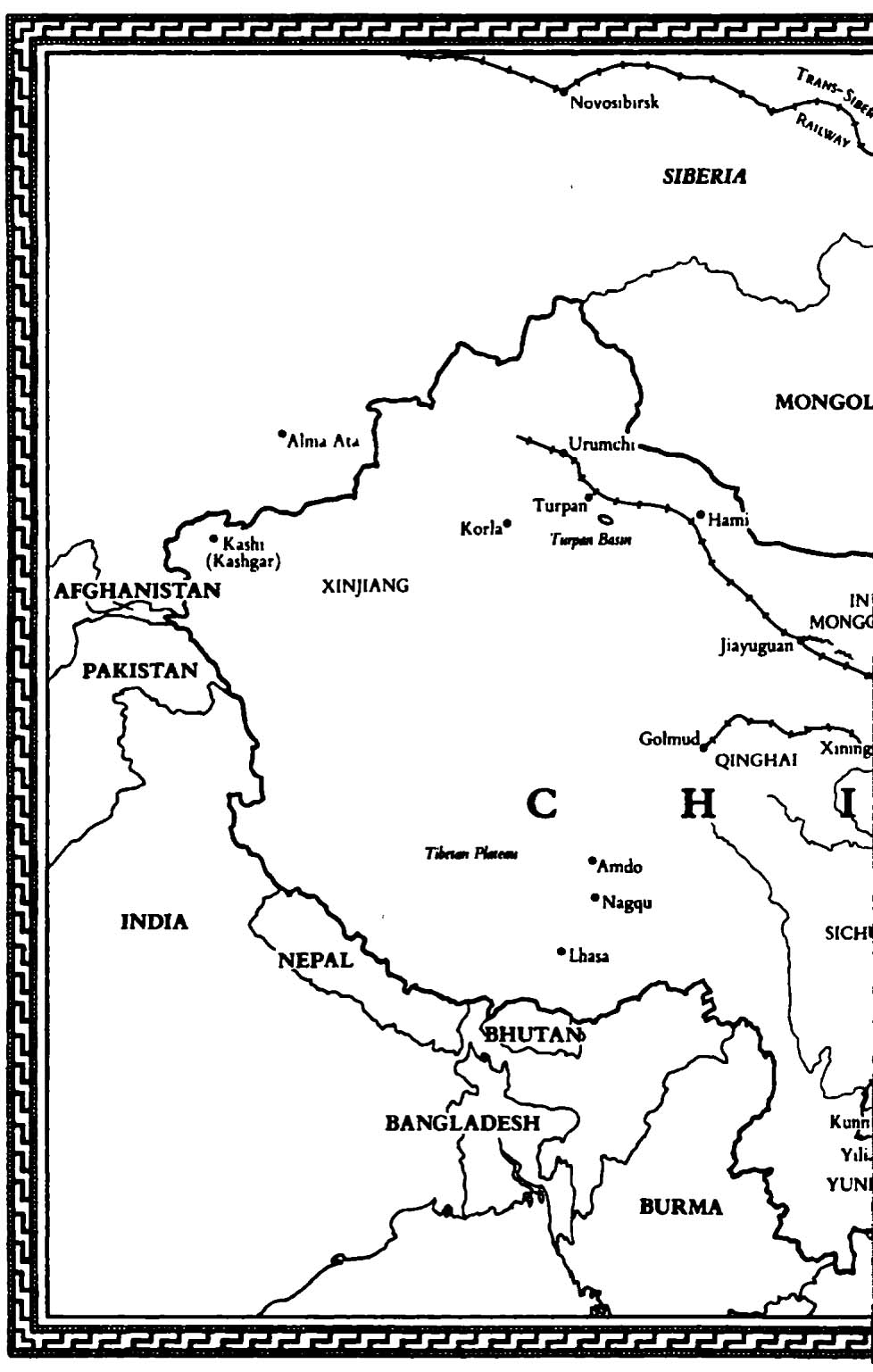 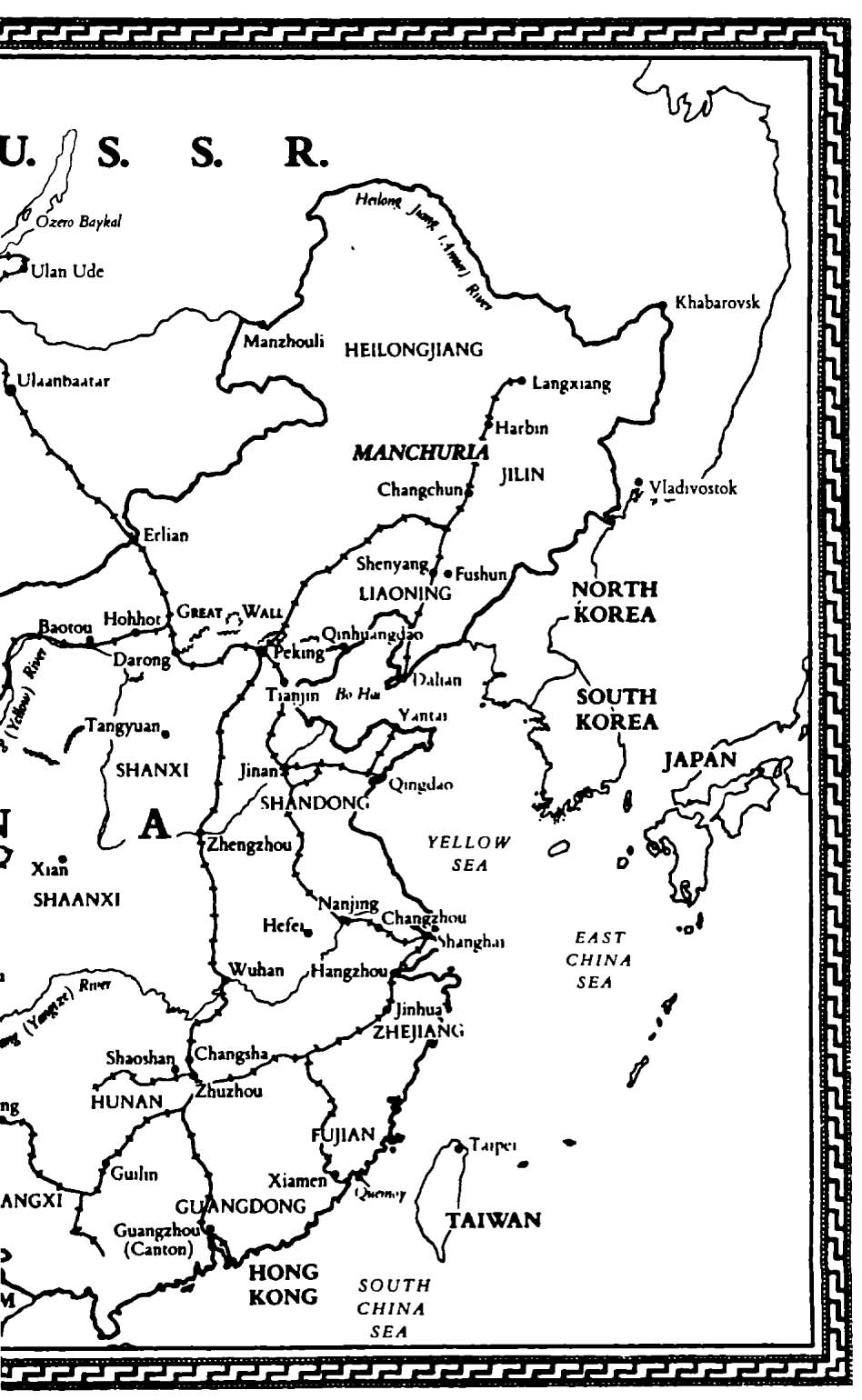 12.Â The Slow Train to Changsha and Shaoshan "Where the Sun Rises"Â 277

A peasant must stand a long time
on a hillside with his mouth open
before a roast duck flies in.

The movements which work revolutions
in the world are born out of the dreams and
visions in a peasants heart on a hillside.

1. The Train to Mongolia

The bigness of China makes you wonder. It is more like a whole world than a mere country. "All beneath the sky" (
Tianxia
) was one Chinese expression for their empire, and another was "All between the four seas" (
Sihai
). These days people go there to shop, or because they have a free week and the price of a plane ticket. I decided to go because I had a free year. And the Chinese proverb
We can always fool a foreigner
I took to be a personal challenge. To get to China without leaving the ground was my first objective. And then I wanted to stay for a whileâin China, on the ground, going all over the place.

The railway was the answer. It was the best way of traveling to Peking (Beijing) from London, where I happened to be. Every modern account of Chinese travel I had read seemed weakened by jet lagâan unhappy combination of fatigue and insomnia. "We were very tired there," is a common remark by travelers to China, the gasping sightseers and bargain hunters. This desire to sit down could be maddening in a country where everyone else was full of beans. Wasn't that the whole point of the Chineseâthat they were always on the go? Even after five thousand years of continuous civilization they were still at it. And one of the lessons of Chinese history is that they never know when to stop.

I had seen China in the winter of 1980. It looked bleak and exhausted, all baggy blue suits and unconvincing slogans on red banners. If you said, "Surely these people ought to be wearing something more than cloth slippers in this snow and ice," you were told how lucky they were and that they used to go barefoot. The whole country was dark brown from the soot and dust. There were few trees. I went bird-watching but saw only crows and sparrows and the sort of grubby pigeons that look like flying rats. The rarer birds the Chinese stuff into their mouths.

The Chinese, then, would point through the drizzle to where a factory was coughing up smoke at the end of a muddy lane; where bent-over people were dragging wooden carts loaded with pig iron. And they would say, 'This was once all prostitutes and bad elements and gambling and bright lights and dance halls." You were supposed to be glad this sinful frivolity was gone, and fascinated by the factories, but I just sighed. I saw young women destroying themselves in mills, smashing their pretty fingers on wooden looms, or blinding themselves doing finicky "forbidden-stitch" embroidery. An official Chinese statistic said that there were seventy million portraits of Chairman Mao on Chinese walls. People whispered when they mentioned his name. Stricken and overworked, they said, "Owing to the success of the Great Proletarian Cultural Revolution..." And they served me bowel-shattering meals.

Americans came back from China saying, Acupuncture! No flies! No tipping! They give you your used razor blades back! They work like dogs! They eat cats! They're so frisky! And Americans even praised Chairman Mao, unaware that many Chinese were privately sick of him.

But that was the past, my brother Gene said, and he told me that I would be a fool not to go now. China had become a different place, and it was changing from day to day. He knew what he was talking about: he had traveled to China 109 times since 1972, as a lawyerâone of the new taipans. I planned to go in the spring this time. I kept telling myself: New people, new scenesâfresh air and the pleasure of anonymity. There were two ways of doing itâthe way of the English poet Philip Larkin, who said, "I wouldn't mind seeing China if I could come back the same day." And there was total immersion.

My idea was to take a train in London, go to Paris, keep going, head for Germany and Poland, maybe stop in Moscow, take the Trans-Siberian, get off in Irkutsk, take the Trans-Mongolian, and spend May Day in Ulan Bator. Essentially the way to China was the train to Mongolia. It was traveling slowly across Asia's wide forehead and then down into one of its eyes, Peking.

Going to Mongolia that way ought to be relaxing, I thought. And it ought to give me a feeling of accomplishment. I would read a little and make notes and eat regular meals and look out of the window. I pictured myself in a sleeping compartment, reading
Elmer Gantry
and hearing the hoot of the train whistle echoing on the steppes, and thinking: Pretty soon I'll be thereâas I drew the blanket up to my chin. And then one day I would snap up the blind and see a yak standing in an immensity of brown sand and I would know it was the Gobi Desert. A day or so later, the landscape would be green and people would be standing knee-deep in rice fields, wearing lamp-shade hatsâall of thatâand I would step off the train into China.

It was not that simple. It never is, and so an explanation is necessaryâthis book. It was my good fortune to be wrong: being mistaken is the essence of the traveler's tale. What I had thought of as the simplest way of getting thereâeight trains from London to the Chinese borderâturned out to be odd and unexpected. Sometimes it seemed like real travel, full of those peculiar discoveries and satisfactions. But more often it was as if I had lost my footing in London and had fallen down a long flight of stairs, perhaps one of those endless staircases designed by a surrealist painter, and down I went, bump-bump-bump, and across the landing, and down again, bump-bump-bump, until I had fallen halfway around the world.

I was not aloneâperhaps that was why. I joined a tour in Londonâtwenty-odd people, old and young. I thought: I'll be invisible, just slip into this crowd of peopleâand off we'll go, smiling and chatting quietly as the sleet hits the windows. 1 had not had much experience of tours. I did not know the most elementary thingsâthat the English go on tours to save money, and elderly couples like the Cathcarts would say, "We had ever such a nice time going overland to India last year, and in Eye-ran we'd make cups of tea in the back of the bus." I did not know that English youths went to places like the Bratsk Hydroelectric Dam on package tours in order to get drunk on cheap vodka, and that Eastern Europe was uproarious with nurses from Birmingham.

Americans took these tours to meet other people, and showed me snapshots from other trips.

"The ones in the straw hats are the Watermules, from San Diego. Lovely couple. We still get Christmas cards from them. That was the GalÃ¡pagos trip. They're grandparents now. That's their son, Ricky. He's very big in semiconductors."

Americans also went on these tours to shop. Shopping seemed to be the whole point of their travel. I honestly had not known that. It seemed as good a reason as anything else, and much better than going to Russia to get drunk. And there were Australians, but wherever you see Australians in the world they always seem to be on their way home.

The other thing about tours I had not known was their utter lack of privacy. It was all swapping names and information, almost from the first moment, and if you forgot their names they reminded you. It was mostly couplesâthe Cathcarts, the Scoonses, Cyril and Bug Winkle, the Westbetters, the Wittricks, the Gurneys; and the single people, who all seemed a little sad and uncertain and too eager, Wilma Perrick, Morris Least and his friend Kicker, an old Californian who called himself Blind Bob, a smiling cockney called Ashley Relph and a man known only as Morthole. There was Miss Wilkie, who stood no nonsense: she was from Morningside in Edinburgh. There was the leader, Mr. Knowles. He was Chris. I was Paul. They preferred first names and never asked me my surname.

In London Ashley Relph said he was dead keen to get to Hong Kong, and blinked, and whispered, "I hear you can get a life-sized latex model of your dick somewhere in Hong Kong. One of these Chinese places. Costs about a fiver."

Morris Least was from Arizona, traveling with his old army buddy, a loud-voiced man who urged us to call him Kicker. Kicker had been in the war. He had a metal plate in his skull. Morris and Kicker had matching jackets and shoes. They wore the same sort of crushproof hat. The two American veterans were in their late sixties, and although they were bad-tempered, they agreed on everything. It seemed to me that these two men had entered into a profound sort of marriage.

Kicker said, "I've never been to Europe before. Amazing, huh? Like I was in the Marines for twenty-two years and never saw Europe. I was in China, though. Back in forty-six. Chingdow."

He had crooked teethâa cruel smile. I asked him what he wanted to do most in Europe.

"I hear China's clean as a whistle," Rick Westbetter said.

Hoping to please her, Rick said, "But London's clean!"

"London's a shambles," Miss Wilkie said, and reminded him that she came from Edinburgh.

"London looks clean to us," Rick said, taking his wife's hand. Her name was Millie. She was sixty-three and wore track shoes. They were one of those oldish hand-holding couples who you're never quite sure are being happy or defiant.

"Of course it looks clean to you," Miss Wilkie said. "Americans have lower standards than we do."

Bella Scoons said in her Western Australian whine, "How far are you going, Miss Wilkie?"

Miss Elva by Stephens Gerard Malone
When I Was Invisible by Dorothy Koomson
A Cowboy Christmas Miracle (Burnt Boot, Texas Book 4) by Carolyn Brown
Appleby's Answer by Michael Innes
Major Crimes by Michele Lynn Seigfried
Stranger in Paradise (Home Front - Book #2) by Barbara Bretton
The Dirty Secrets Club by Meg Gardiner
Visions Of Paradise by Tianna Xander
Clarissa Harlowe; or the history of a young lady — Volume 3 by Samuel Richardson
Gambling on the Bodyguard by Sarah Ballance
Our partner