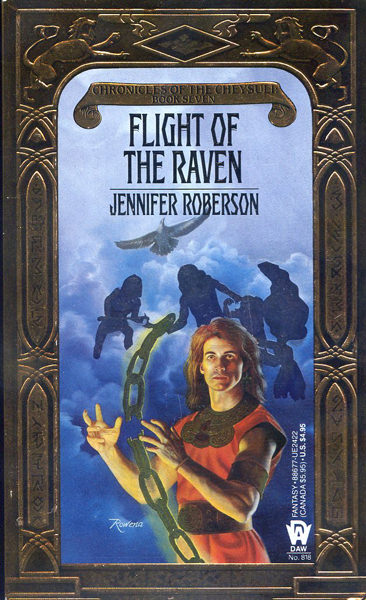 FLIGHT OF THE
RAVEN

The
Chronicles of the Cheysuli:

LEGACY OF THE SWORD

TRACK OF THE WHITE WOLF

A PRIDE OF PRINCES

DAUGHTER OF THE LION

FLIGHT OF THE RAVEN

A TAPESTRY OF LIONS

U S PAT OFF AND FOREIGN COUNTRIES

HECHO EN U S A

PRINTED IN THE U S A

This one is for S.J. Hardy, who, loving to read,
married a woman exactly the same.

Eventually they begat four children who, in
their turn, had the great good sense to pass along the reading gene to yet a
third generation.

When my turn comes, I'll try my best to do
the same. 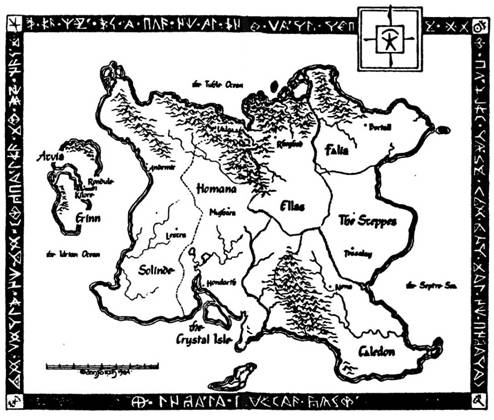 The Chronicles of the
Cheysuli:

THE PROPHECY OF THE
FIRSTBORN:

"One day a man of
all blood shall unite, In peace, four warring realms and two magical
races."

Originally
a race of shapechangers know n as the Cheysuli, descendants of the Firstborn,
Homana's original race, held the Lion Throne, but increasing unrest on the part
of the Homanans, who lacked magical powers and therefore feared the Cheysuli,
threatened to tear the realm apart. The Cheysuli royal dynasty voluntarily gave
up the Lion Throne so that Homanans could rule Homana, thereby avoiding
fullblown internecine war.

The
clans withdrew altogether from Homanan society save for one remaining and
binding tradition: each Homanan king, called a Mujhar, must have a Cheysuli
liege man as bodyguard, councillor, companion, dedicated to serving the throne
and protecting the Mujhar, until such a time as the prophecy is fulfilled and
the Firstborn rule again.

This
tradition was adhered to without incident for nearly four centuries, until
Lindir, the only daughter of Shaine the Mujhar, jilted her prospective
bridegroom to elope with Hale, her father's Cheysuli liege man. Because the
jilted bridegroom was the heir of a neighboring king,
Bell
am of Solinde, and because the marriage was
meant to seal an alliance after years of bloody war, the elopement resulted in
tragic consequences. Shaine concocted a web of lies to salve his obsessive
pride, and in so doing laid the groundwork for the annihilation of a race.

Declared
sorcerers and demons dedicated to the downfall of the Homanan throne, the
Cheysuli were summarily outlawed and sentenced to immediate execution if found
within Homanan borders.

Shapechangers
begins the
"Chronicles of the Cheysuli," telling the tale of Alix, daughter of
Lindir, once Princess of Homana, and Hale, once Cheysuli liege man to Shaine.
Alix is an unknown catalyst bearing the Old Blood of the Firstborn, which gives
her the ability to link with all
lir
and assume any animal shape at will. But Alix is raised by a Homanan and has no
knowledge of her abilities, until she is kidnapped by Finn, a Cheysuli warrior
who is Hale's son by his Cheysuli wife, and therefore Alix's half-brother.
Kidnapped with her is Carillon, Prince of Homana. Alix learns the true power in
her gifts, the nature of the prophecy which rules all Cheysuli, and eventually
marries a warrior, Duncan, to whom she bears a son, Donal, and, much later, a
daughter, Bronwyn. But Homana's internal strife weakens her defenses. Bellam of
Solinde, with his sorcerous aide, Tynstar the Ihlini, conquers Homana and
assumes the Lion Throne.

In
The Song of Homana
, Carillon returns
from a five-year exile, faced with the difficult task of gathering an army
capable of overcoming Bellam. He is accompanied by Finn, who has assumed the
traditional role of liege man. Aided by Cheysuli magic and his own brand of
personal power, Carillon is able to win back his realm and restore the Cheysuli
to their homeland by ending the purge begun by his uncle, Shaine, Alix's
grandfather. He marries Bellam's daughter to seal peace between the lands, but
Electra has already cast her lot with Tynstar the Ihlini, and works against her
Homanan husband. Carillon's failure to father a son forces him to betroth his
only daughter, Aislinn, to Donal, Alix's son, whom he names Prince of Homana.
This public approbation of a Cheysuli warrior is the first step in restoring
the Lion Throne to the sovereignty of the Cheysuli, required by the prophecy,
and sows the seeds of civil unrest.