Rock Harbor Series - 01 - Without a Trace 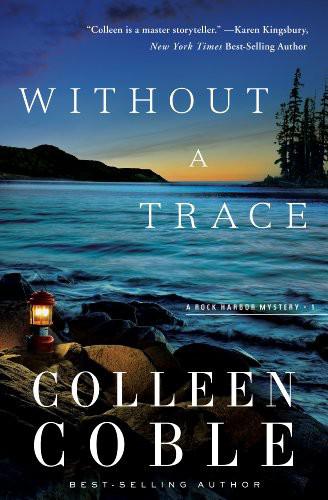 “Suspense, action, mystery, spiritual victory—Colleen Coble has woven them all into a compelling novel that will keep you flipping pages until the very end. I highly recommend
Without a Trace
.”

—James Scott Bell,
author of
Deadlock
and A
Higher Justice

“Colleen Coble hooked me on page one, then reeled me into her story with a cast of characters I can’t wait to meet again, a plot so intricately woven that I marveled at its construction, and a mystery that kept me guessing till the final pages.
Without a Trace
is a page-turning, eye-misting, don’t-miss-it masterpiece!”

—Deborah Raney,
author of
A Scarlet Cord
and
Beneath a Southern Sky

“
Without a Trace
is a tautly plotted who-dun-it with a wide-ranging cast of characters that captures the essence of small-town America. Colleen Coble brings Michigan’s Upper Peninsula to life and gives you a whiff of what it’s like to own a Search and Rescue dog.”

“Without a Trace
offers an intriguing mystery about a disappearance and a murder. But the story is much more than a simple who-done-it as it delves deep into the emotional mysteries of loss, betrayal and guilt, and the redemptive power of God’s love. A powerful beginning for a new mystery series.”

“Colleen Coble spins a story of unsettled relationships, deceit, and the frustrations of seeking the lost into a warm tale of the hope of healing.”

“I couldn’t turn the pages of
Without A Trace
fast enough. The suspense built with each new chapter, right up to the breathless conclusion. This is a series readers won’t want to miss!”

—Robin Lee Hatcher,
best-selling author of
Return to Me
and
Trouble in Paradise

“Colleen Coble draws such rich characters, you have to force your-self not to pray for them! Her descriptions of the frigid Michigan UP made me shiver. This page-turner kept me up at night, and anxious for book two in the series.”

—Kristin Billerbeck,
Author of
What a Girl Wants
and
Split Ends

“
Without a Trace
is an absorbing, page-turning read with well-defined characters and all the excitement and apprehension surrounding Canine Search and Rescue. A great read!”

—Lori Copeland,
author of Brides of the
West and Morning Shade
series,
Co-author of the
Heavenly Daze
series

T
HE
R
OCK
H
ARBOR
S
ERIES
Without a Trace
Beyond a Doubt
Into the Deep
Cry in the Night
Silent Night: A Rock Harbor Christmas novella
(
available as an e-book only
)

Without a trace / by Coleen Coble.

For my wonderful, supportive family:

my husband, David, my son, David Jr., and my daughter, Kara.

I love you all very much!

A
BOUT
THE
A
UTHOR

—“The Hound of Heaven”

I
’m so glad you picked up
Without a Trace
, book one in the Rock Harbor series! This series holds a special place in my heart. The town of Rock Harbor has become almost as real to me as my own hometown. My sincere hope is that you’ll come to love Bree, Samson, and the rest of the folks as much as I do.

My grandmother used to have a poem she kept in her Bible called “The Hound of Heaven.” I read it so often that I practically memorized it. Through that poem, the idea that Jesus truly seeks us out became so real to me. And so very precious. When I discovered as an adult how amazing trained search-and-rescue dogs are, I knew I had to write about one and use that poetic analogy of the divine Hound of Heaven.
Without a Trace
and the Rock Harbor series were born out of that desire.

My grandmother was the greatest influence in my life, and I take it as the highest compliment when people tell me I’m very much like her. Writing the Rock Harbor series was like passing on some of the things I learned from her. So, more than any other book I’ve written,
Without a Trace
is my tribute to her. I hope you enjoy reading the series as much as I enjoyed writing it!

And
do
email me and let me know what you think. I love to hear from my readers. Email me at [email protected] and visit my website at
www.colleencoble.com
.

Also, there are more books set in Rock Harbor on their way to you. Watch for my first children’s book, all about my precious granddaughter, Alexa Grace. Her “Punky” book is coming in July 2013—set in Rock Harbor of course! It’s titled
The Blessings Jar
. And there are more Rock Harbor children’s books in the works.
Rock Harbor Search
and Rescue
releases in April 2013 and
Lost and Found
will be out in October 2013. They feature Emily, the young girl in
Without a Trace
. She’s fourteen now and has a search dog of her own.

I
t was days like this, when the sun bounced off Lake Superior with an eye-squinting brilliance, that Bree Nicholls forgot all her qualms about living where the Snow King ruled nine months of the year. There was no other place on earth like the U.P.—Michigan’s Upper Peninsula. With Keweenaw Peninsula to the north and Ottawa National Forest to the south, there could be no more beautiful spot in the world. The cold, crystal-clear waters of the northernmost Great Lakes stretched to the horizon as far as she could see.

But she’d never find those kids by focusing on the seascape. Pressing her foot to the accelerator, she left the lake behind as she urged her old Jeep Cherokee forward along the rutted dirt track. Bree’s best friend, Naomi Heinonen, steadied herself against the door’s armrest and looked over her shoulder at the two dogs still safely confined in their kennels. The Kitchigami Wilderness Preserve lay to the east, past Miser, a drive of only fifteen miles or so, but on this washboard road, it took longer than Bree liked.

“Don’t kill us getting there,” Naomi shouted above the road noise.

Bree didn’t reply. These lost children weren’t some vacationers without ties; they were residents of Rock Harbor, two of their own. And night would be here soon. If Naomi were driving, her foot would be heavy on the accelerator too. The preserve was a formidable tract that could swallow up two kids without a trace.

The wind churned autumn’s red and gold leaves in eddies and blew them across the road like brightly colored tumbleweeds. Equally
colorful trees crowded the hills like giant banks of mums. The U.P. in autumn was Bree’s favorite time, except when ever-shorter days put strangleholds on their search efforts.

M-18 headed on east, but Bree made a sharp turn onto Pakkala Road, which would take them into a heavily forested area. In the spring, motor homes and SUVs pulling campers plied the road on their way to experience some of the last wilderness left in the Midwest. Today the road was practically empty.

“Fill me in on what we know,” Bree said.

“Donovan O’Reilly reported Emily and Timmy missing three hours ago. They were on some outdoor nature thing with their school,” Naomi said.

Bree knew Donovan O’Reilly—he owned the local Ace Hardware store. His wife had left him and the kids nearly two years ago, and now his eyes had a haunted look, as though he wondered what fate would hand him next. Bree often stopped by Ace to pick up supplies for the ongoing renovation of her lighthouse home, and a friendship of sorts had developed between them.