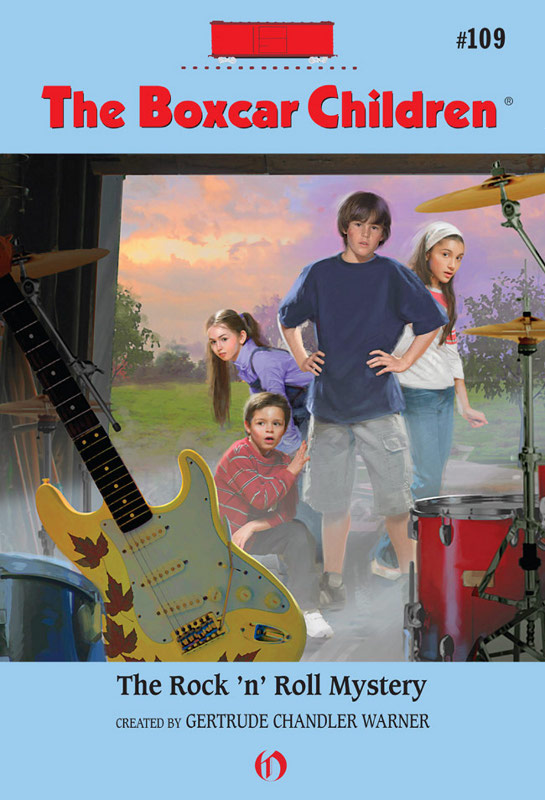 5. A Clue and a Keyboard

6. The Girl with the Ponytail

“Benny, are you playing with that again?”

Twelve-year-old Jessie Alden stood watching her six-year-old brother. Benny held a ukuleleâa very small guitar with four strings. His fingers were struggling to get some sound out of it.

“I can't seem to make itâ¦work,” he said, a little frustrated.

He and Jessie were inside a large white tentâone of dozens that had been set up on the fairgrounds at the edge of town. The Greenfield Music Festival drew a huge crowd every year. More than twenty different groups would be performing this year, playing jazz, blues, classical, and rock 'n' roll. The Alden children loved the festivalâand this year they'd gotten a chance to be volunteer workers there!

Henry, who at fourteen was the oldest, was helping out in the stage area. Ten-year-old Violet, who was a very good artist, was painting signs. And Jessie and Benny were busy setting up “The Instrument Petting Zoo.” It was a special tent run by Mr. Lessenger, who owned a music store in Greenfield, and it was one of the most popular features of the festival. Children could try all types of musical instrumentsâguitars, violins, drums, horns, and flutes.

Benny shook his head and laughed. “I'm never going to be able to play this!”

“You can if you practice,” Mr. Lessenger replied. He was a cheerful older man with white hair and glasses, and he loved helping children discover the joys of music.

“It takes time, Benny,” he continued. “Don't be discouraged. The greatest musicians in the world couldn't play a note when they started.”

“Really?” Benny asked. That made him feel better.

Most of the instruments were set neatly on their stands, and their cases were stacked in the corner, out of the way. “Looks like you've made some good progress since I was last here,” said Mr. Lessenger.

“We're just about finished,” Jessie replied. “We just need to make sure everything's in tune.”

Mr. Lessenger nodded. “That's great, Jessie. Thanks so much for all your help. And I hope you're having fun playing the instruments. I see Benny on the ukulele over there, but what about you? Have you tried anything?”

“No, not yet,” Jessie answered. “But I'm thinking about the piano. I like the sound of pianos very much.”

Mr. Lessenger nodded. “That one over there was built over fifty years ago, so it sounds great.”

Jessie seemed puzzled by this. “I don't understand. Doesn't it sound worse as it gets older? Doesn't it wear out?”

“Oh, no,” Mr. Lessenger replied with a smile. “Many instruments get better with age. They've been played so much that everything gets sort of âbroken in.' I have customers who will pay a lot for older instruments, and custom instruments, too.”

“What does âcustom' mean?” Jessie asked as Benny continued plinking and plunking in the background.

“It means it was made just for one person. Many musicians don't buy their instruments in an ordinary store. They order them specially made from scratch.”

“It is,” Mr. Lessenger went on. “Custom-made instruments are often more beautifulâand sound much betterâthan instruments made in factories. Some of the best instruments I've ever had in my store were either very old or custom-made.”

Another person joined them in the tent. He was a young man with messy black hair. Mr. Lessenger had introduced him earlier in the morningâhis name was Tim, and he worked at Mr. Lessenger's store.

“I'm all done,” Tim said. “There's nothing else to unload from the truck, so I'll head back to the store now.”

“Okay, good,” Mr. Lessenger said. “I'll see you over there in a little while.”

Tim turned and left without another word. When the Aldens had first met him, he hadn't seemed very friendly. He just nodded but didn't say hello, and he didn't speak to Jessie or Benny when he carried the instruments from his truck to the tent. Maybe he was just the “quiet type,” Jessie thought.

After Tim left, Jessie busied herself tuning the guitars. She had to use something called a “pitch pipe,” which had six short silver tubes sticking out of it, three on each side.

When she blew into each tube, a single musical note came out. The six strings on each guitar were supposed to match the six notes made by the pitch pipe. It took Jessie about fifteen minutes to tune all the guitars. Benny's ukulele had already been tuned.

“Okay,” Jessie said, “now that that's done, let's take a little break. We'll get some doughnuts, and we'll bring some over to Violet and Henry. They must be hungry, too.”

“Oh, boy, doughnuts!” Benny said, jumping off the chair and carefully setting the little ukulele back on its stand. Benny Alden had the biggest appetite of any six-year-old in Greenfield.

They walked together across the big field. It was a bright, sunny dayâperfect weather for a festival. At one of the food tents, Jessie bought a bag of powdered doughnuts and four bottles of apple juice. Then she and Benny headed towards the big stage in the middle of the fairground. This was where all the bands would play during the festival.

They'd been watching it go up all morning, and every hour it grew bigger. The stage platform had been built first. Then, two towers of colored lights were put up. After that a row of lights was added across the top, including a huge spotlight. Finally, a giant white curtain was hung as a backdrop.

As they walked toward the stage, Jessie noticed Tim, the young man who worked at Mr. Lessenger's store. He was standing behind a treeâalmost as if he was hiding. He was talking to a young woman with a ponytail that was so long it went all the way down her back. Tim had told Mr. Lessenger he was going right back to the store, and yet here he was. Jessie watched as Tim and the girl shook hands. Then Tim looked around, to see if anyone was watching, but he didn't seem to spot Jessie.

Jessie hurried to catch up with Benny. She didn't say anything to him about Tim. It probably wasn't important, she thought. 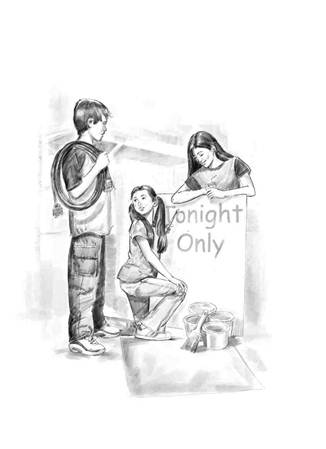 There were at least twenty people working busily around the stage. One man was fiddling with dozens of knobs and buttons on something called a control board. The Aldens had learned that the control board could change all the sounds during a concertâthe high sounds of violins and flutes, and the low sounds of bass guitars and big drums. It could make things louder or softer, and it could also create special effects like echoes. A sign hanging from it said, “Please Do Not Touch.”

Another man was testing the lights from a second control board, turning on the green lights first, then the red ones, then the blue ones. There was a certain excitement in the air, too, as if something big was about to happen.

Jessie and Benny found Violet on the other side of the stage, carefully painting a tall wooden sign.

“You look like you could use something to eat and drink,” Jessie told her. She was always taking care of her brothers and sister, very much like a mother would.

“Thanks, I sure could.” Violet chose one doughnut from the bag and twisted the top off her bottle. She took a long sip of apple juice, then said, “I'm just about done with the sign. How do you think it looks?”

The background had been painted white, and the words “Tonight Only” were in dark green letters at the top.

“I'm going to add âthe Greenfield Four' and some instruments next,” said Violet.

“Thanks,” Violet replied. “They're going to hang it up tomorrow night when the band plays.”

The Greenfield Four was one of the most popular bands in town. There were two men and two womenâall very talented. When the four of them sang together, their voices blended beautifully. They played many different instruments, too. It seemed as though they were good at everything!

The band played in the Greenfield area all the time, often at one of the schools or at a charity event. Alan and Amy Keller were the band's leaders, and they were also married. Karen played piano and guitar, and Dave played drums.

“I'll bet Karen will love the sign,” Jessie said to Violet. In addition to being a member of the Greenfield Four, Karen had also been giving Violet guitar lessons for the past few months.

“I hope so,” Violet replied. “No one will see it until the end of the festival, since the Greenfield Four will be the last band to play.”

“Because they're the most popular,” Violet said. “It'll be the perfect end to the festival.”

“And also,” Jessie added, “because the man from the record company will be here then.”

“Oh, that's right,” Benny said. “I forgot about that. Why is he coming again?”

“He travels all over the country, looking for talented new groups,” Jessie told him.” As soon as he finds them, he has them make albums for him. Then their CDs are sold all over the world.”

“So this is the Greenfield Four's big chance to become famous,” Violet added.

On the other side of the stage, Henry, the oldest Alden came huffing and puffing as he carried a large coil of black cable over his shoulder. He was followed by a man who was carrying another, larger coil. The man's name was Raymond, and he was a “roadie.” He traveled with bands wherever they went, helping to set up all the equipment.

Raymond was small and muscular, with very dark bushy hair and a thick mustache. He was friendly enough, but, like Tim, he seemed kind of quiet. The Aldens also noticed that he was very good at his job.

“Those two have been working so hard,” Violet said.

Henry and Raymond came around to the front of the stage. Raymond smiled.

“Thanks for loaning me your brother today. He's been great.”

Henry was still trying to catch his breath. He tried to say something, then just nodded instead. Everyone laughed.

Jessie opened his juice for him and handed it over. Henry drank half of it in one long sip. Then he grabbed a doughnut from the bag and took a big bite.

“I never had any idea how hard it was to build a stage,” he said.

“Harder than living in a boxcar?” Jessie asked.

Henry managed to smile. “Well, not as much fun,” he replied.

After their parents died, the Aldens had run away from home. They knew that their grandfather was trying to find them, but they had heard that he was mean. They found an abandoned train carâa boxcar in the woodsâand cleaned it up so they could live in it. Their grandfather still found them, though, and the children were delighted to learn that he wasn't mean at all. He took them back to his home in Greenfield, and he brought their boxcar along, too! He set it up in the backyard so the children could play in it anytime they wished.

“You do this kind of work every night, don't you Raymond?” Benny asked.

“Just about, Benny,” Raymond said. “And it
is
a lot of work. But I'm lucky this timeâI have all these great volunteers to help.” He patted Henry on the back and said, “Take five minutes, Henry. You've earned it. Then meet me in the back with that cable. We've still got plenty to do.”