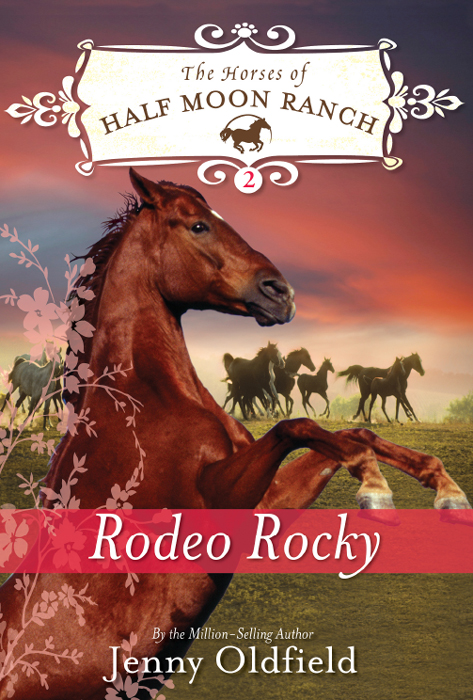 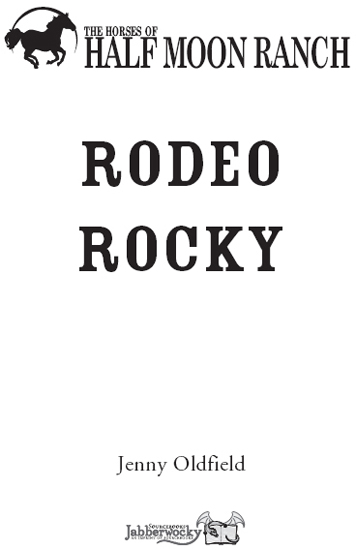 Published by Sourcebooks Jabberwocky, an imprint of

Originally published in Great Britain in 1999 by Hodder Children’s Books.

Cataloging-In-Publication data is on file with the publisher.

With thanks to Bob, Karen, and Katie Foster, and to the staff and guests at Lost Valley Ranch, Deckers, Colorado

The Horses of Half Moon Ranch Series 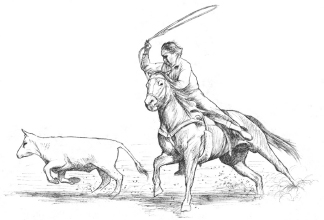 “… Yup, I guess over the years I broke just about every bone in my body,” Hadley Crane told Kirstie Scott.

The head wrangler at Half Moon Ranch leaned on the fence at San Luis Competition Grounds to reminisce. His white Stetson was pulled well forward to shield his lined, brown face, his gray eyes were alert to the activity in the arena.

Kirstie, too, watched the team-roping competition with mounting interest. The next steer was made ready, prodded and pushed into the narrow wooden chute. Two riders entered chutes to either side. They sat astride tough, well-built quarter horses—horses that had been trained to round up cattle on the ranches that nestled in the foothills of the Colorado Rockies. The nerves of both riders and horses were strung tight as the steer barged and kicked inside its narrow trap, demanding to be released into the arena.

“I broke my left leg three times,” Hadley went on. “My hip got trampled, I dislocated this right shoulder more times than I can count …”

“All in rodeo accidents?” Kirstie stood on the bottom bar of the white fence to get a better view. The barrier went up, the steer charged into the dusty ring.

“Sure thing. Mostly bulldogging; that’s a mighty risky event, when you have to land on eight hundred pounds of bullock and wrestle him down. And bronco riding; that’s bad too.” Hadley watched the red steer raise the dust as it skidded to a halt across the arena, turned right around, and charged back the way it had come.

After a ten-second delay, the two cowboys were let loose too. Whooping and yelling, digging their spurs deep into the horses’ flanks and with the cries of a sizeable San Luis crowd in their ears, they swung their ropes and headed for the bullock.

Kirstie winced as the first rope circled the bullock’s head and the noose tightened. The frightened animal was dragged to a sudden halt. Now it kicked and writhed as the second cowboy swung his lasso. She glanced up and read the bold words printed on the banner that fluttered in the breeze over the entrance to the arena: “Keeping the Dream Alive!”

“I always feel sorry for the steers,” she told Hadley quietly.

The ex-rodeo man shrugged and smiled briefly. “Yup. But I reckon you’re soft on any critter with four legs. Seems to me you like ’em better than the two-legged kind.”

Kirstie didn’t deny it. She watched the second cowboy, the heeler, lasso the steer’s back legs and jerk it to the ground. The poor animal lay bound and helpless in the dust as the horses pranced and the riders dismounted.

“Nine point six seconds!” the voice on the loud-speaker announced. The crowd of two thousand people roared and cheered.

Quickly they untied the defeated animal and cleared the arena, ready for the next team. Scores flashed up on the electric scoreboard.

“Hey, Kirstie.” Lisa Goodman sidled up to her friend to watch the closing stages of the competition. She wrinkled her nose at the gray dust that blew out of the arena, then brushed her white sweatshirt and ran a hand through her curly red hair.

“Hey,” Kirstie replied, eyes narrowed and fixed on the next steer lined up in the chute.

“Tell me never to wear white to the rodeo,” Lisa grumbled, squinting down at her grubby sweatshirt.

“
What
next time?” As Kirstie turned to glance at her best friend, the wind blew her fair hair in wisps across her hot face. There was grit in her eyes and a growing sensation that this would be her last visit to the competition grounds. “Tell me never to come to another rodeo again,” she countered.

“OK: never come…” Lisa’s voice was drowned by the cheers of the crowd as the final bullock was released.

“Wow, did you see that last team? Nine point two seconds to rope that bullock!”

“It came out of the squeeze like a black bullet! Those guys sure knew how to rope a steer!”

Eager voices commented on the team-roping event as the crowd waited for the result.

“OK, Kirstie?” Sandy Scott joined her daughter, Lisa, and Hadley at the ringside. A taller, older version of Kirstie with the same fair hair and large, gray eyes, she wore a pale straw Stetson and light denim shirt over her blue jeans and tan cowboy boots and was followed by a bunch of guests from Half Moon Ranch.

“Hmm.” Kirstie chewed her lip and said nothing, knowing that the rodeo wasn’t her mom’s favorite thing either. It was the ranch guests whose eyes had lit up when they heard about the regular San Luis event. They’d asked Sandy to drive them the fifteen miles into town so they could cheer, clap, take photographs, and enjoy the hustle and bustle of the July show day.

“What’s next?” one hyped-up kid asked Hadley. The dark-haired, eleven-year-old boy climbed up on the fence and sat kicking his heels against the wooden rails. He looked eagerly across the arena toward the empty chutes.

“Wild horse race,” the wrangler mumbled, low and slow. “You have teams of three men trying to get a saddle on a wild mustang and ride him around that track, see?” He pointed toward a race course that ran for half a mile around the perimeter of the competition grounds. “’Course, the mustang don’t wanna know. He was out on the plains of Wyoming a couple of days back, before they drove a truck out there to rope him in and drive him here specially for the competition.”

“After that, it’s the bulldogging event, and last of all comes the bronc riding,” Sandy told him. “Then back home to Half Moon Ranch for a cookout by Five Mile Creek.”

Brett Lavin nodded and switched his gum from cheek to cheek. His father, Dale, told him to stay put while he went to place a bet on his favored team for the wild horse race.

Amidst the excited chatter and the people milling about, Kirstie kept her eyes on the empty corral beyond the arena. “What happens to the mustangs after the race?” she asked Hadley in a quiet voice. It was a question she’d never considered in the four years she’d been living at the ranch.

“They end up down at the sale barn,” the wrangler explained as he nodded to a couple of old friends—tall, skinny men in checked shirts and Stetsons like Hadley himself. “If they’re lucky, a rancher like Jim Mullins at Lazy B or Wes Logan up at Ponderosa Pines will pay good money for them, break them in, and use them as working horses on the cattle roundups in spring and fall.”

“And if they’re not lucky?” Lisa cut in.

Hadley shrugged. “Some of these ex-rodeo horses are real mean. There’s not a lot you can do with ’em.”

As Kirstie weighed up his answer and the uncomfortable silence that followed, she frowned. “They wouldn’t be mean if they were allowed to stay out in Wyoming where they belong. No horse is
born
mean!”

Brett Lavin had latched onto what he sensed might be an argument between the old ranch hand and the boss’s daughter. He clicked his gum between his teeth and stared intently.

Sandy caught Kirstie’s eye and gave a small shake of her head. “Not now!” she whispered.

“Hey, why don’t we go over to the corral to watch them unload the horses from the truck?” Lisa suggested brightly, linking arms with Kirstie and dragging her away.

“Am I right?” Kirstie insisted as the two girls threaded their way through the crowd. “Do you know any horse that’s born mean?”

“OK, OK, don’t yell at me!” Lisa cut through a group of cowboys who stood waiting for the result of the team-roping event. When the scoreboard flashed up the winners to another loud cheer, the men turned to shake hands. “I’m on your side, remember.”

Though she had lived all her life in the small town, and her mother, Bonnie Goodman, ran the End of Trail Diner on San Luis’s main street, Lisa spent a lot of her time at her grandfather’s place in the mountains.

It was there, at Lone Elm Trailer Park, that Kirstie had first met and made friends with the red-haired girl during the Scotts’ first summer at Half Moon Ranch. They’d been nine years old and had swapped friendship bracelets at the end of the school vacation, before Kirstie had started her first term at San Luis Middle School.

Since then, at exactly the same point in the year, when the aspen trees were silver-green in the mountain valleys and the clear lakes sparkled under deep blue skies, the girls had ridden out to Hummingbird Rock and exchanged new bracelets. Four bracelets for four years of friendship.

“Sorry,” Kirstie told Lisa now, as they arrived at the corral where a large truck was backing in. Two men ran to the rear of the truck to lower a ramp, and before the girls had time to take in what was happening, a bunch of horses clattered down the metal slope.

Noise, sudden light, strange smells. The mustangs emerged from the trucks with nostrils flared and ears set back. They wore rough rope head collars and trailed lead ropes after them. There were grays and blacks, tan horses and sorrels, Appaloosas and paints, all with long, flowing manes and frightened eyes. They kicked and bucked as they came out of the truck, rearing up in the bright sunlight, their hooves flailing and thudding into the dust.

Holding her breath, half in horror at the conditions in which the horses had been kept, half-fascinated by their wild strength and beauty, Kirstie stared.

Soon a second truck backed into the corral to deliver more horses for the race. The ramp went down with a clatter and the mustangs fled from their dark prison. They squealed and whinnied, heads thrown back, eyes rolling in fear. And this time, Kirstie fixed her gaze on one particular horse.

Guardsman of Gor by John Norman
La estatua de piedra by Louise Cooper
Persian Girls: A Memoir by Nahid Rachlin
Too Close to Touch by Georgia Beers
Fugitive Nights by Joseph Wambaugh
Blood Wolf Dawning by Rhyannon Byrd
Writing Is My Drink by Theo Pauline Nestor
Shopping for a CEO's Fiancee by Julia Kent
Paying the Price (Book 5 of The Empire of Bones Saga) by Terry Mixon
The Secret by Rhonda Byrne
Our partner