Read Rogue Heroes: The History of the SAS, Britain's Secret Special Forces Unit That Sabotaged the Nazis and Changed the Nature of War Online

Rogue Heroes: The History of the SAS, Britain's Secret Special Forces Unit That Sabotaged the Nazis and Changed the Nature of War 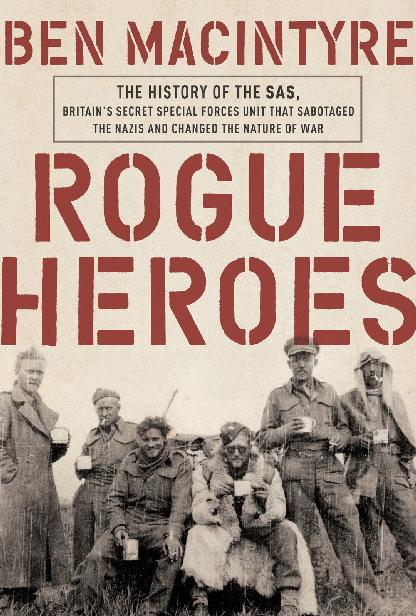 Rogue Heroes: The History of the SAS, Britain's Secret Special Forces Unit That Sabotaged the Nazis and Changed the Nature of War

The latest from the bestselling author of Operation Mincemeat and A Spy Among Friends -- the untold story of one of WWII's most important secret military units.Ben Macintyre's latest book of derring-do and wartime intrigue reveals the incredible story of the last truly unsung secret organization of World War II -- Britain's Special Air Service, or the SAS. Facing long odds and a tough slog against Rommel and the German tanks in the Middle East theatre, Britain turned to the brainchild of one its most unlikely heroes -- David Stirling, a young man whose aimlessness and almost practiced ennui belied a remarkable mind for strategy. With the help of his equally unusual colleague, the rough-and-tumble Jock Lewes, Stirling sought to assemble a crack team of highly trained men who would parachute in behind enemy lines to throw monkey wrenches into the German war machine. Though he faced stiff resistance from those who believed such activities violated the classic rules of war, Stirling persevered and in the process created a legacy. Staffed by brilliant, idiosyncratic men whose talents defied both tradition and expectations, the SAS would not only change the course of the war, but the very nature of combat itself.      Written with complete access to the never-before-seen SAS archives (who chose Macintyre as their official historian), Rogue Heroes offers a powerfully intimate look at life on the battlefield as lived by a group of remarkable soldiers whose contributions have, until now, gone unrecognized beyond the classified world. Filled with wrenching set pieces and weaving its way through multiple theatres of our grandest and most terrible war, this book is both an excellent addition to the Macintyre library and a critical piece in our understanding of the war's unfolding. 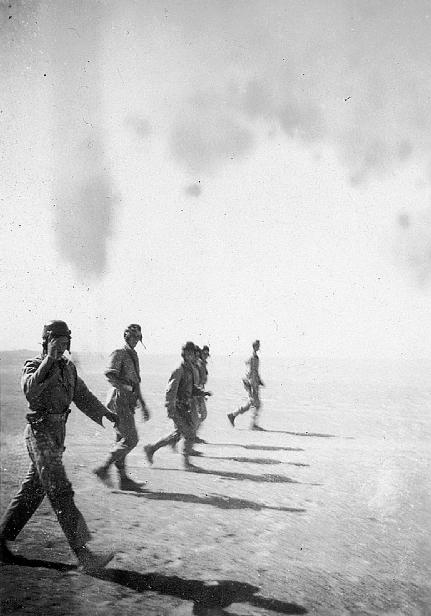 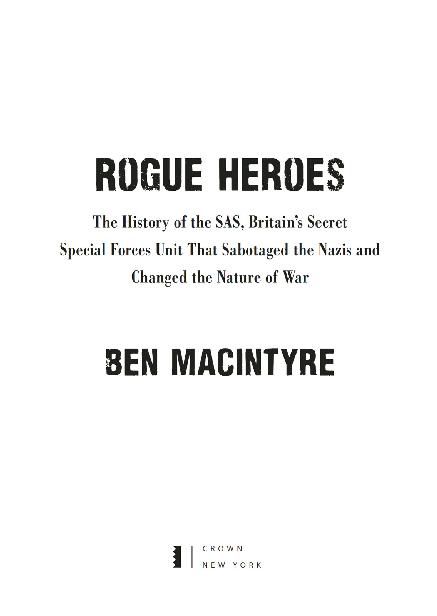 Published in the United States by Crown, an imprint of the Crown Publishing Group, a division of Penguin Random House LLC, New York.

CROWN is a registered trademark and the Crown colophon is a trademark of Penguin Random House LLC.

Photography credits can be found on
this page
.

You are “the best of cut-throats”: do not start;

The phrase is Shakespeare’s, and not misapplied:

Unless her cause by Right be sanctified.

Prologue: INTO THE DARK

PART I: WAR IN THE DESERT

Chapter 4: INTO THE DESERT

Chapter 7: A PARTY OF GHOSTS

Chapter 13: QUITE, QUITE MAD

Chapter 20: A PREDILECTION FOR RISK

Chapter 22: INTO THE REICH

2. Axis Airfields Along the Libyan Coast

5. The SAS Campaign in Italy

6. SAS Operations in France After D-Day

Many books have been written about the origins and formative years of the SAS during the Second World War, and most are excellent in their own way.

Here, however, for the first time, is the full early story of the SAS based on our own Second World War Diary, personal accounts of those involved, and never-before-released archive material. Ben Macintyre has drawn together a gripping tale which follows the Regiment’s exploits through North Africa, to Sicily and Italy, before D-Day saw it in France and then the final thrust deep into Germany taking SAS jeep patrols to the shores of the Baltic.

Joining 22SAS on its formation in 1952, I was privileged to command the Regiment from 1967 to the end of 1969. I had the good luck to know David Stirling well, together with many of the Originals such as George Jellicoe, David Sutherland, Pat Riley, and Jim Almonds.

I believe the author has done an outstanding job in capturing the audacity of the operations and teasing out the eccentricities of the very different characters involved; how they related to one another and fought together in these early operations was key to the success of the Regiment.

The darker side of war cannot be ignored and Macintyre does not shirk from exploring the effects on all involved as the fighting becomes bloodier and more desperate in the final months of the conflict. Events have also been placed in the wider strategic context of the war in Europe. This is important, as he recognizes both the core ethos of the SAS and the fact that its role and impact were strategic. This remains true to the present day.