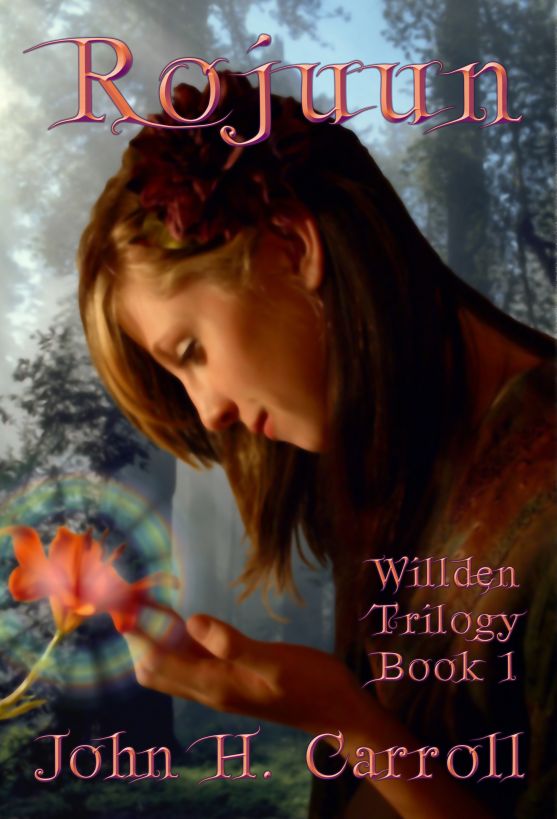 This book is dedicated to my wonderful
family, who will be delighted to spend any money I might make off
of it. Thank you for putting up with me. 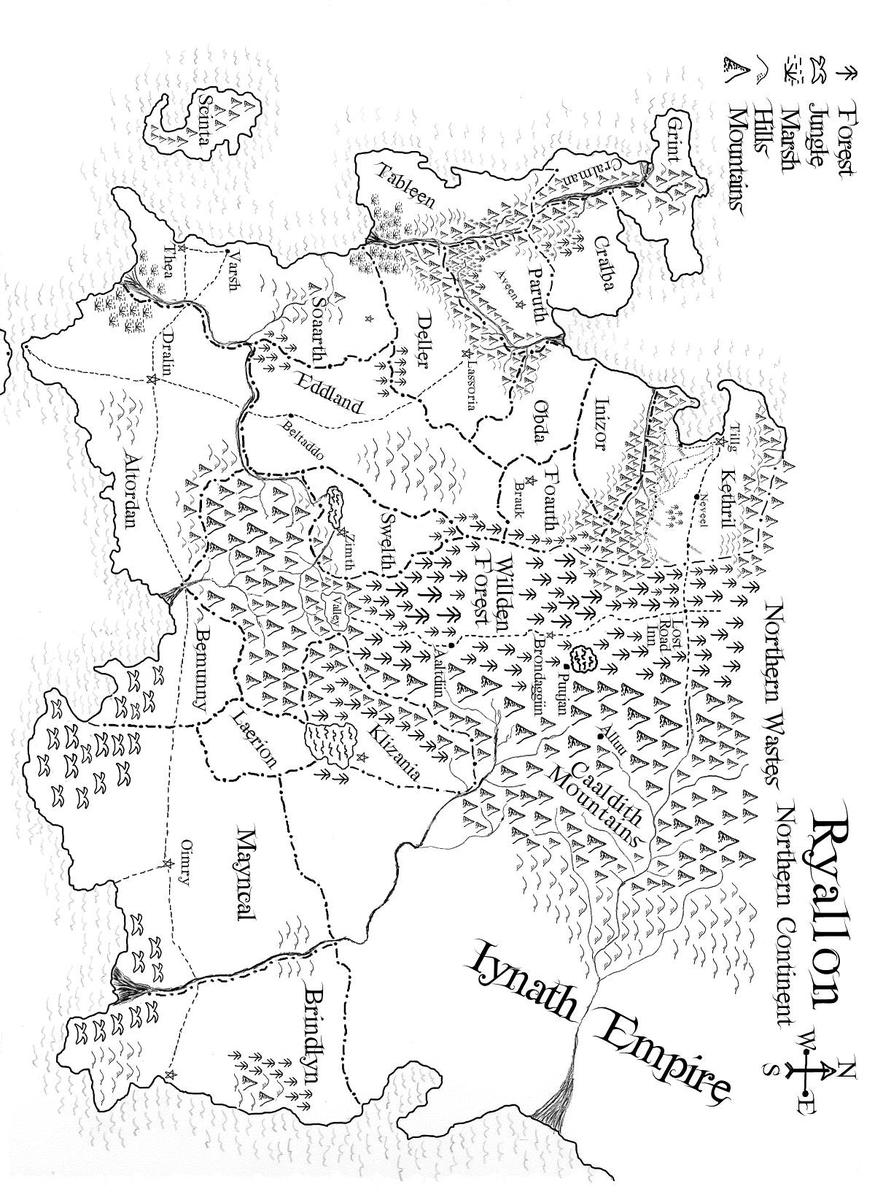 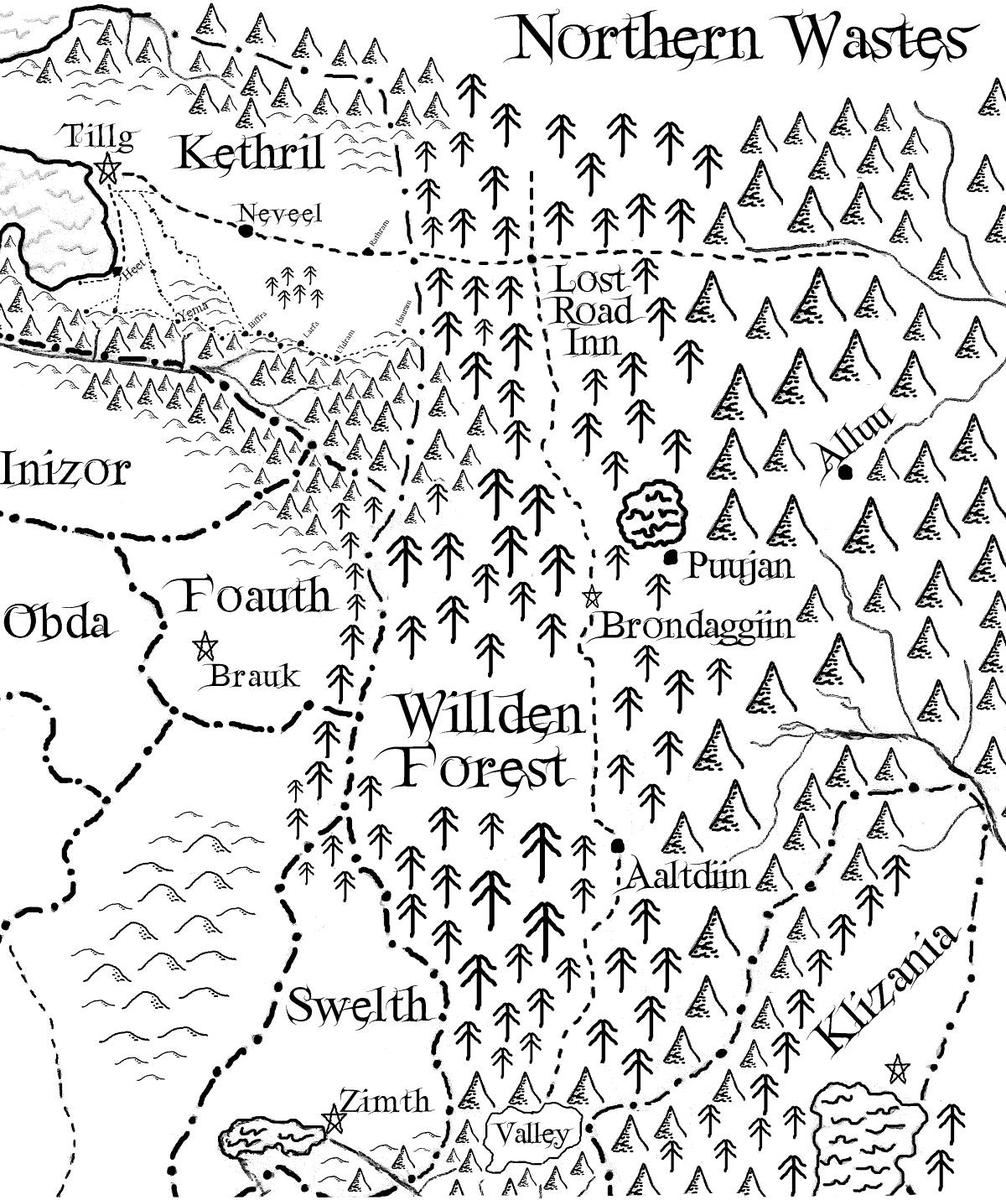 Tathan was a tall man of twenty-nine years
with short, curly black hair framing a face tanned by travel. His
hand was on the hilt of a thin, slightly curved sword sheathed at
his waist and his intense grey eyes studied the peaceful valley
where he had been raised. Throughout his journeys, he always
remembered the sights and scents of this valley. Tathan closed his
eyes and felt the breeze caress his cheek as it had in his
childhood. It brought the sounds of bees finding the first blossoms
of the year. Other insects buzzed through the valley hoping the
birds would be too busy singing their songs to feast upon them.

The sun had risen just an hour ago. Tathan
knew it would take a full day and night’s travel to make it to the
eastern side of the valley where he used to live, so he adjusted
his travel pack on his shoulders and continued on. There was no
path or road, his parent’s house being the only dwelling in the
valley. Snowcapped mountains surrounded wild grasses, which were
dotted with groves of trees and crossed by small streams. The sky
was deep blue with wisps of clouds that would likely become
afternoon thunderstorms. It was early spring and flowers were
beginning to bloom, mingling their scents with that of fresh
grass.

Few people had come through to visit when he
was growing up. It was a safe, remote place free of the wars,
thievery, politics and various ills of civilization that prevailed
throughout the rest of the world. The only religion Tathan had
grown up with was a simple spirituality and knowledge of the ways
of nature. Just being back in this valley was almost enough to
bring a smile to his face, but he hadn’t smiled in quite a
while.

Tathan jumped at a noise from his right. He
drew his sword and moved low to the ground in the direction he
thought the sound had come from. There was nothing out of the
ordinary. Then he scrutinized the small mountain trail behind him
for danger. The breeze ruffled his hair as he scanned the rest of
the valley and the sun glistened off a small, opal tipped piercing
in his eyebrow and the golden earrings that hung from his ears. An
unseen danger whispered on that breeze. Tathan stayed in a
defensive position for a few moments before sheathing his sword. He
must remember not to be so jumpy when he returned home.

Tathan loped across the valley at a good
pace. He wore dark leather clothing over his thin frame and moved
much like a panther gliding over the grass. Some had underestimated
his strength in the past for he was not built as a brawler, his
true abilities being speed and stealth. Hours passed before he
slowed to a walk.

It was good to be able to run again. A
person could not run through city streets without attracting
stares. The mountain pass he had just come through was not made for
running either, being too steep. Tathan reached into his pack to
grab sustenance as he looked around once more. Sheep roamed freely
to the north of him, staying together to protect themselves from
the occasional predator. Tathan remembered having to round them up
for wool and meat when he was younger. It was a simpler life
then.

The rest of the day passed without incident.
Flowers were in bloom while bees and insects went merrily about
their business. It amused Tathan to think of insects as merry, but
it was the way of things here. The thought of camping for the night
crossed his mind, but he had been traveling for months and his
sleep had been disturbed by dark dreams.

As the sun began to touch the western
mountains, Tathan stopped to rest for a bit and cook a warm meal of
rabbit he had caught along the way. It took a few minutes to set a
fire pit and gather some sticks from a grove of trees nearby and
water from a small stream. The clouds hadn’t delivered upon their
promise of afternoon rain, so the wood was dry. A gesture and a
word sent a swirl of flame from his fingertips to light the
campfire. Tathan prepared the rabbit then warmed roots he had dug
out of the ground earlier. It was a good meal. He leaned against
his travel pack to relax for a bit while eating.

Tathan suddenly rolled to the left. His
sword slashed through the air, then again, and once more. Tathan
jumped aside, looking for the next person to fight. There was no
one, no one at all. In the dim light of the moons and the lingering
coals of the campfire, Tathan saw that the only thing he had
wounded was thin air. He was certain the air would recover. After a
quick search of the area, he extinguished the fire, grabbed his
travel pack and continued on toward home.

The world of Ryallon was vast. Many scholars
believed it would take a lifetime to go from one end to the other,
and some said it couldn’t be done in a lifetime. Two moons lit the
night sky for him to travel by. Siahray, the closest, was blue and
green. It was three quarters full in the southern sky. Piohray was
small and far from the world. Red and orange colors swirled around
the surface, though it was hard to tell unless one stared at it
awhile. It was half full near the eastern horizon. Together, they
cast a lavender tint over the surroundings that made it easy to
travel by.

Shortly after midnight, Tathan thought he
saw a dragon cross the sky in front of Siahray. A few minutes later
he saw a burst of brilliant white to the north. The thought of
dragons playing in the sky pleased him.

It was morning when Tathan saw the smoke of
a fireplace rising in the distance. He would make it in time for
breakfast and his stomach growled in anticipation. Before long, he
was close enough to smell cooking food. The sun peeked over the
mountains ahead as he approached the house, an old place built by
his great, great, a few more greats, great grandfather or
something. It was made of grey stone with a thatched roof and faced
the southern mountains. He had been told as a child that the stone
was bound by magic, making it strong. Two other houses had been
built when the family expanded at some point in the past. They
stood empty now, used only for storage. Only Tathan, his parents
and his older sister, Mariah, had lived there in his youth. The
large barn behind the house was stone as well. A brook he had
played in as a child babbled nearby. On the other side of the brook
were the woods where he used to explore.

The sun’s amber light had just reached the
chimney of the house when Tathan stopped, taking in the scene
before him. The thing he remembered most about his childhood was
wanting to leave. Every chance he got, Tathan would run off to
explore the woods, climbing up trees to hide from his parents so
that he wouldn’t have to do chores or go to bed. He explored
further with every year he aged, going beyond the woods to the base
of the mountains, trying to find roads out of the valley. At first
his father beat him for running off, but eventually gave up when he
realized that his son would just run farther and hide better the
next time.

“Mother! Mother!” A young woman had just
come around from the back of the house and spotted him, breaking
his reverie. She ran to the front porch and, with a glance over her
shoulder, dashed inside. Tathan stared at the door for a moment.
There hadn’t been anyone younger living here when he was growing
up. His sister would be much older now. It had been fourteen years
since last he was home.

A tall, attractive woman of middle age
walked out, wiping her hands on an apron that protected her yellow
dress from stains. “Hello, traveler! We don’t get many people
visiting in this valley,” she said in a strong and cheerful voice.
Her black hair was beginning to go grey, the same color as her
eyes, and the same color as Tathan’s eyes. “Traveler? Are you well?
Do you need aid?”

Tathan shook his head to clear it. “Hmm?
Yes. I’m alright. Pardon me, but I don’t recognize you.”

The woman paused and looked closely at
Tathan. “I don’t recognize you either. Should I?” The young woman
who had rushed inside came back out to stand next to her
mother.

“I was raised here. My name is Tathan.”

Realization dawned on her face. “Tathan? . .
. I know that name. You’re Ellin’s son, left some fourteen years
ago. Welcome home nephew. My name is Sherrie and this is my
daughter, Liselle. Will you join us for breakfast?”

“Yes, thank you. Are my mother and father
home, and Mariah, my sister?” Tathan saw the two women look at each
other in silence. He knew immediately that something had happened
to his family.

“Your mother is here, but. . .” She
continued after a brief pause. “Your father left his body to the
ground some ten years ago. His body gave out,” she explained.
“Seven years ago, your sister Mariah felt pain in her side for some
days before she also died. I am so very sorry.” There were tears in
the eyes of both women as they looked at him sympathetically.
Tathan felt tears in his own eyes as well.

Field of Graves by J.T. Ellison
Tapestries 03 - Woven Dreams by N. J. Walters
Lone Wolf (Shifters' World 1) by Ruby
The Deal by Tony Drury
The Earth-Tube by Gawain Edwards
Love's Last Chance by Jean C. Joachim
Perilous Partnership by Ariel Tachna
Hold Me Tight: Heartbreakers by Cait London
Catering to the CEO by Chase, Samantha
Under the Rose by Julia O'Faolain
Our partner