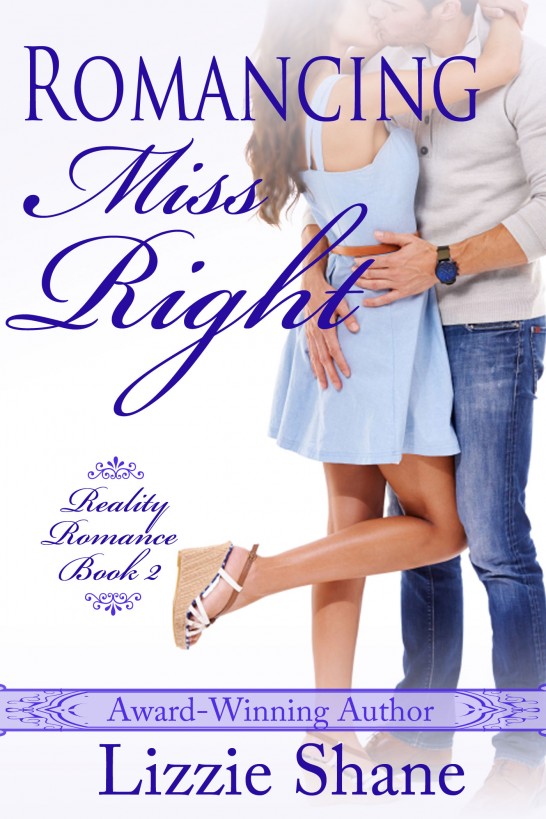 Smashwords Edition. All rights reserved.
Without limiting the rights reserved under copyright above, no part
of this publication may be reproduced, stored in, or introduced
into a retrieval system, or transmitted in any form, or by any
means (electronic, mechanical, photocopying, recording, or
otherwise) without the prior written permission of the copyright
owner and publisher of this book.

This is a work of fiction. Names, characters,
places, brands, media and incidents are either the product of the
author’s imagination or are used fictitiously. Any resemblance to
actual events or persons, living or dead, is entirely
coincidental.

They aren't in it for love... but
love has it in for them.

Marcy Henrickson isn't looking for love as
the latest Miss Right on the reality dating show
Romancing Miss Right
. She's realistic enough to know
the odds of finding true love on national television are
astronomical--but the chance that the exposure will boost her next
book onto the New York Times Bestseller List? That's a risk worth
taking. And if she's the one picking from the handsome Suitors, how
can she possibly get hurt?

The last thing Craig Corrow wants is to fall
in love. San Diego's Favorite Bad Influence is looking to
transition from local radio shock-jock to national television host
and a reality dating show is his ticket to fame and fortune. He's
there to stir things up and Miss Right is just another pawn in his
game plan...

Until he meets Marcy and she isn't the fake
reality princess he was expecting. She's all too real--and so is
the way he feels about her. But when he's faced with a choice
between love and money, can this bad boy give up his villain ways
and get the girl?

“
I’m sorry, Marcy.
I think you’re an amazing woman and any man would be lucky to have
you as his wife, but I’m afraid my heart is engaged elsewhere. I
just didn’t feel that spark, that connection—”

On the screen, the footage of Mr. Perfect’s
perfect face twisted into an expression of contrition cut to
Marcy’s reaction shot. Or rather her lack-of-reaction shot. Miranda
grimaced—she knew what was coming.

“Emotionless,” Wallace barked, hitting the
pause button so the jumbo television that dominated the wall of his
office froze on Marcy’s pretty face, gazing back at the man billed
as the most eligible bachelor in America without even a glimmer of
a tear in her stunning green eyes as he was supposed to be breaking
her heart on national television.

“Frigid.” Wallace flung his iPad toward
Miranda so it landed on the desk blotter with an audible thunk in
time with his next adjective. “Unfeeling. Robotic.”

Miranda obligingly studied the focus group
data that had turned her boss into a walking thesaurus. “They also
say she’s gorgeous, clever, and witty.”

“They don’t like her,” Wallace snapped,
Marcy’s face still looming over both of them from the wall.

“Sure they do,” Miranda argued, tapping the
spreadsheet. “Eighty-seven percent approval.”

She was the whole package. Lustrous brown
curls, classic good looks, and striking green eyes with the
slightest hint of a wicked sparkle.

“Fine, they like her, but they don’t
feel
for her. How am I supposed to market the girl who
didn’t even blink when Mr. Perfect dumped her? No protestations of
love. No begging for an explanation. No sobbing uncontrollably in
the rejection limo. America
loves
the fucking sobbing.”

“She isn’t an idiot. She knew Jack was in
love with Lou from the first time she saw them together.”

“I wish she were an idiot. America likes
idiots. Idiots make good television.”

“Then trust the ratings,” Miranda countered
just as forcefully. She hadn’t clawed her way to executive producer
at such a young age because she was meek and retiring. “The finale
of
Marrying Mister Perfect
was the most watched episode of a
reality dating show in the last six years. We not only beat all our
previous seasons, we flat out spanked
American Dance Star
and
Matchmaker Express.
We’re talking
Idol
style
numbers.”

“You caught lightning in a bottle last
season, no one can argue with that,” Wallace acknowledged. “And you
got the promotion to prove it. But no one cares about last season’s
success. Audience retention is the name of the game and the girl
who shrugged off her shot at true love isn’t going to have people
rushing to their televisions every Tuesday night.”

“Marcy understands the show. The camera loves
her and she’s a dream to work with—”

Wallace reached for the iPad, flicking
through the focus group data. “
Guarded. Has walls around her
heart. Uses her intellect to keep men at a distance. Can’t allow
herself to be vulnerable.
”

Miranda glowered. Who’d let the amateur
shrinks into the focus group? “Okay, yes, she’s a little
emotionally reserved, but the situation will be different when
she’s playing Miss Right. She’ll be in control and more willing to
show how she feels—”

“I want her to cry,” Wallace said, brutal and
hard. “America loves criers. Give me messy emotional breakdowns I
can promo the hell out of and you might keep your shiny new office
for another season.”

Miranda bit back the urge to tell her boss
exactly how wrong he was about America loving criers. They’d had a
girl who’d cried at the drop of a hat three seasons ago who was
among the most hated Miss Rights in living memory. What America
loved was a good love story. That was why they’d fallen in love
with the saga of Jack and Lou, why Miranda had gotten her promotion
from supervising producer to executive producer, and why they would
fall in love with Marcy. All Miranda had to do was make sure Miss
Right fell in love. Seeing a guarded, snarky woman show her softer
side would bring the audience in droves.

But Wallace knew shit about love, so instead
Miranda promised, “She’ll cry. Trust me. Marcy Henrickson is
ratings gold.”

“Stop saying trust me. There is no trust in
television,” Wallace growled. “There’s only success or
unemployment.” He stabbed a finger at the remote, making the screen
on the wall go black.

Miranda didn’t flinch at the threat. The uber
boss of
Marrying Mister Perfect
and its companion show
Romancing Miss Right
was a bully and a prick who liked his
television with cheap theatrics and easy hits. She’d known that
before she started working for him years ago, fighting her way up
from segment producer all the way to EP. Wallace’s official title
was EP too, but he surveyed events from on high in his office,
connected to the show only by reports and rundowns.

Miranda would be the one in the trenches,
pulling love out of thin air, and Miranda understood her audience.
She knew what America really wanted to watch and she knew how to
manipulate situations and emotions to make it happen.

Miss Right was going to fall in love this
season. Whether she wanted to open herself up to it or not.

And it all started with finding the right man
to woo her.

“And the last entry into
the Where-the-hell-is-Craig-disappearing-to-for-eight-weeks
sweepstakes is from Penny in Santa Clara…” Craig braced his
forearms on the desk and leaned into the mic, crooning into it in
his trademark almost-too-suggestive-for-the-morning-commute style
as he read the entry his producer had just sent to his tablet,
“
A monastery in Spain where you’ll be taking a vow of
celibacy.”
He chuckled darkly into the mic. “Good guess, Penny,
since I did say it was the last place you’d expect Your Favorite
Bad Influence to go, but no there are no monasteries in my
future—Spanish or otherwise. Though it would probably take me eight
weeks just to confess all my sins.”

Through the glass, his producer spun his hand
in the wrap-it-up signal and Craig’s eyes flicked automatically to
the clock—his last thirty seconds of air time for the next two
months. An unidentifiable pang tightened his chest, but he shook it
off.

“Keep submitting your guesses at K-Rock dot
com and Marta at Midnight—who will be Marta in the Morning until I
get back—will read them on the air.”
To make sure she doesn’t
forget whose show this really is.
“Until then, this is Your
Favorite Bad Influence, Craig Corrow, reminding you to be naughty,
boys and girls, and keep listening to 105.6 KRRK, K-Rock in San
Diego, your station for classic rock.”

He tapped a key on the console and Ozzy
screamed, “All aboard,” as the distinctive opening strains of
Crazy Train
blared through his headphones. The light over
the mic went dark and Craig tipped off his headphones, hooking them
over the mic and rolling his chair back. Edwin, his mostly mute
producer, threw him a thumbs up through the glass, already packing
up for the change-over as the All Request Lunch crew prepared to
take over the studio.

Craig normally bounded out of his chair, high
on the adrenaline from the show, but today he lingered, keenly
aware that there was a chance—however slight—that Marta would kill
it while he was gone and he wouldn’t have a job to come back to. He
liked K-Rock. The two years he’d spent here had been decent
enough—though he’d never really gotten close to anyone at work.
He’d always known that this was just a stepping stone for him. He
was too ambitious to spend his entire life as a radio personality,
no matter how widely syndicated. Craig wanted more. He’d bided his
time, building his name and his audience but when the chance had
come to get his face in front of a national audience—even if it
meant going radio silent for eight weeks—the decision had been a
no-brainer. Network television trumped a moderately sized classic
rock station in San Diego any day.

Those two words—
network
television—
stomped on any nostalgia he might feel for leaving
K-Rock and Craig bounded out of his chair, turning his cell back on
as he gathered up his empty coffee mug and tablet. Hooking the mug
over one finger and tucking the tablet under his arm, he shoved
open the door with his shoulder and strode into the hall, thumbing
through the messages on his phone, nodding but not pausing as his
coworkers called out cheerful—but not overly
personal—farewells.

The first two messages were from his
agent—doubtless having another panic attack at the risk of leaving
his established audience to go play the villain on the latest
iteration of reality dating bullshit. Craig paid him to worry so he
didn’t have to, but the man needed to get onboard. The contracts
were signed, pre-taping complete. He was leaving tonight to go to
the Romancing Miss Right mansion for the duration, so it was too
late for second thoughts, even if he was inclined to have them,
which he wasn’t.

The Zombie Game by Glenn Shepard
In the Evil Day by Temple, Peter
Between by Lisa Swallow
Rogue Wolf by Heather Long
The Clear-Out by Deborah Ellis
The Romantic by Madeline Hunter
Jack in the Box by Shaw, Michael
One Wedding Night... by Shirley Rogers
The First Ghost by Nicole Dennis
Bound to the Beast: Russian Hitman Romance by Stone, Ada
Our partner