Room 1219: Fatty Arbuckle, the Mysterious Death of Virginia Rappe, and the Scandal That Changed Hollywood 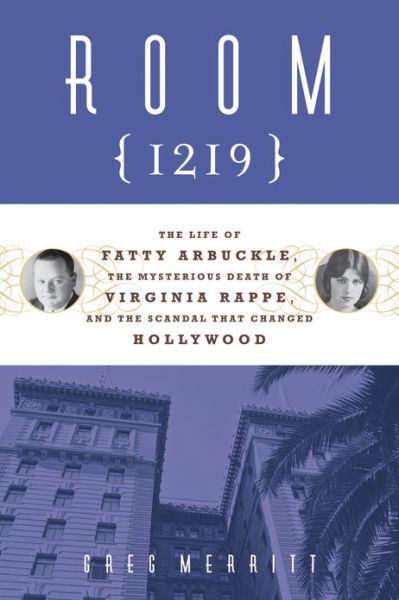 Room 1219 : the life of Fatty Arbuckle, the mysterious death of Virginia Rappe, and the scandal that changed Hollywood / Greg Merritt.

Summary: “Part biography, part true crime narrative, this painstakingly researched book chronicles the improbable rise and stunning fall of Roscoe “Fatty” Arbuckle from his early big screen success to his involvement in actress Virginia Rappe’s death, and the resulting irreparable damage to his career. It describes how during the course of a rowdy three-day party hosted by the comedian in a San Francisco hotel, Rappe became fatally ill, and Arbuckle was subsequently charged with manslaughter. Ultimately acquitted after three trials, neither his career nor his reputation ever recovered from this devastating incident. Relying on a careful examination of documents, the book finally reveals what most likely occurred that Labor Day weekend in 1921 in that fateful hotel room. In addition, it covers the evolution of the film industry—from the first silent experiments to the connection between Arbuckle’s scandal and the implementation of industry-wide censorship that altered the course of Hollywood filmmaking for five decades”—Provided by publisher.

T
his is a mystery story. It began on Labor Day of 1921 in room 1219 on the top floor of a San Francisco hotel. Only two people were present. One was Roscoe “Fatty” Arbuckle—a movie superstar. The other was actress Virginia Rappe. Afterward, Rappe suffered wrenching pains for four days and then died. More than nine decades later, the mystery remains: What happened in that room? Did Arbuckle assault Rappe or otherwise contribute to the injury that led to her death, or did he only happen to be near when her injury became evident? Was she his victim, or were they both victims of circumstance?

When Arbuckle was arrested for the murder of Rappe, a mania raged as newspapers competed to print the most startling front page. One simply shouted (in the largest possible letters): A
RBUCKLE, THE
B
EAST.
Others predicted the previously beloved performer’s death on the gallows. He was not just tried and convicted in the press but also sentenced and punished, again and again.

So was Hollywood. Once the public’s appetite for scandal was whetted, it could not be sated. For weeks in the autumn of 1921, newspapers dredged up or concocted stories of movie industry depravity. A typical headline read, A
RBUCKLE
A
FFAIR
No S
URPRISE AFTER
O
RGIES OF
F
ILM
C
OLONY.
A new narrative took hold. Previously, the “film colony” lifestyle was presented in fan magazines and newspaper gossip columns as a carefree extended adolescence. Suddenly, this characterization had a dark
counterpoint: Hollywood was filled with spoiled idlers, living beyond society’s norms, going from party to party, fueled by jazz music, alcohol, narcotics, and deviant sex. The editorialists had a field day.

The public, which had begun over the previous few years to learn about their favorite actors’ houses and families and vacations, now started to learn about their adultery and wild parties and drug use. It’s a straight line from the tabloid-style coverage of the Arbuckle case to
Confidential
magazine in the 1950s to today’s
National Enquirer
and TMZ. In the years following Arbuckle’s arrest, studio publicity machines continued to paint performers in the most favorable light. However, now that a superstar actor had appeared in story after story as a “beast”—the host of an orgy to which he lured starstruck young women, one of whom he raped and killed—there was no turning back; the following year, tales of a director’s mysterious murder and an actor’s doomed fight with drug addiction would fill front pages.

The relentless coverage of the Arbuckle case sparked loud condemnations of Hollywood’s allegedly decadent ways from editorialists, religious leaders, and a new and powerful voting bloc—women. That trifecta was part of the coalition that had successfully lobbied for Prohibition, and they intensified their fight against motion pictures, another “intoxicant.” In fact, many restated an argument they made against alcohol: movies cast those who imbibed them under a dreamlike spell that could loosen morals and foster criminality. The defenders of tradition were pitted against the purveyors of modernity. On one side, the Victorian era. On the other, the Jazz Age. It was the first great battle in a culture war that has persisted in various forms to the present day.

Arbuckle was a casualty of this war. On the day of the fateful party, he had seven feature films playing in theaters and two more in the can; he was the top star at the top studio. Less than a week after his arrest, his films had been pulled from every screen in America. Later, his image was effectively banned from American cinemas by Will Hays—the head of the motion picture industry’s new self-policing organization. No artist in American history has been censored more than Roscoe “Fatty” Arbuckle.

Before Rappe’s death, Arbuckle had been among the most beloved of all celebrities. His “Fatty” movie character was typically a scamp bumbling in and out of trouble, mischievous and sometimes corrupt but easy to laugh at and root for. The actor made news for charitable giving and for appearances and purchases that highlighted the wealth and leisure of the elite few in the new motion picture industry. With the passage of time and the proliferation of myths, the true story of Roscoe Arbuckle was lost. He was remembered as a killer or a victim and nothing more. To the present day, his name reappears when a celebrity is publicly entangled in a matter of sex or violence, yet invariably nothing is said about his film career other than that it was “ruined.” We learn nothing about his forty-six years of life other than his association with a tragic death.

The best introduction to him is via his movies, and it’s easier than ever to watch them today. Much of his finest work—silent shorts made between 1914 and 1919—can be viewed free via the Internet. Techniques feel fresh, because they were forgotten long ago. Ludicrous situations and slapstick antics build in the manner of cartoons. Arbuckle was a veteran of the vaudeville stage, and you see that medium’s aesthetic brought to cinema: deliver as much varied entertainment as possible. There are visual puns, pratfalls and chases, exaggerated violence, broad emotional eruptions, tender love scenes, risqué and macabre humor, wild stunts, subtle parodies, and camera and editing tricks. Shots of printed text, now known as intertitles, replicate spoken lines and sometimes provide a wry commentary.

Not every Arbuckle movie has aged well. Comedic bits can fall flat in even his best movies. Some of the humor is shockingly adult, but most of it is childishly silly, and an adult has to accept that silliness to fully enjoy it. Unfortunately, few potential viewers ever realize what they’ve been missing. The contributions of Roscoe Arbuckle—the ingenious comedic actor and adroit filmmaker—have been virtually forgotten, as if erased by whatever occurred in that hotel room in 1921.

This book’s first mystery is just that: what
did
occur in room 1219? Its second mystery helps us solve its first: who was Roscoe Arbuckle, and was he capable of the crime for which he was tried three times? His career
took him from Wild West vaudeville stages to some of the first motion pictures shot in Los Angeles, to the heights of young Hollywood, to the depths of his ostracism, and to a long-delayed comeback in the sound era. He worked closely with fellow legends Charlie Chaplin, Mabel Normand, Mack Sennett, and Buster Keaton. He was one of the first people to fully experience the Hollywood lifestyle, including a fleet of trophy cars, a mansion and servants, and worldwide fame—as well as frequent parties, marital separations and divorces, and drug addiction.

But Roscoe Arbuckle’s life story is not the only one to have been eclipsed by the events of Labor Day 1921. The real story of Virginia Rappe, the only other person in that hotel room, was buried so deep beneath the accumulated lies and exaggerations that it seemed it would never be found again. The prosecution and the newspaper accounts portrayed her as an innocent, while Arbuckle’s defense team questioned her character. However, it was only decades after her death that the strongest attacks on her reputation were launched. She was presented in histories as a “slut” if not a “whore,” sleeping her way through Hollywood, riddled with venereal diseases, and suffering from the lingering effects of a botched abortion. Rappe came to represent the movie industry’s underbelly and the licentious Jazz Age in the same manner Arbuckle had in 1921. However, virtually everything I first learned from books and websites about Rappe was wrong, starting with her year of birth and ending with her cause of death. Beyond the inaccurate sexual and medical histories, there was precious little written about her. That’s why it was surprising to find so much about her published during her lifetime.

Overcoming an impoverished childhood, she became a celebrated model, an inventive clothing designer, and a moderately successful film actress. She was entrepreneurial, idealistic, and outspoken. Using her fame in the fashion world, she championed feminism and pacifism. She traveled to Europe and throughout America. She was frequently engaged but never married. But all of that and more was seemingly erased the moment she died—except it wasn’t. This book’s third and final mystery is: who was the real Virginia Rappe?

A missing chapter remains, however, in the biographies of both Virginia Rappe and Roscoe Arbuckle. And that returns us to the first mystery. What happened in room 1219 has been obscured not just by conflicting testimony and the passage of time but also by the proliferation of myths. The most prevalent of these is that Arbuckle punctured Rappe’s bladder by raping her with a bottle. Today if a person knows only one thing about Fatty, it is probably the bottle legend. When previous histories did not merely print this fiction or some variation, they blamed the victim, highlighting lies about her to further their thesis that Arbuckle was innocent.

In this book, I revisit Labor Day 1921 and present the details we know for certain, what each side said, and, ultimately, what likely caused Virginia Rappe’s death. I avoided forming an opinion about this ultimate mystery until I had read the available testimony and reportage, consulted with experts, and thoroughly researched the lives of Arbuckle and Rappe. When I realized that pertinent information had been missed or marginalized, it became clear that fragments of the most reliable accounts fit together like pieces of a jigsaw puzzle. Ultimately, a new picture took shape. The most comprehensive, objective narrative of what likely occurred on September 5, 1921, in room 1219 of the Hotel St. Francis is presented in these pages.

My aim has been to peel away the accumulated fictions and present the true story of one of the neglected giants of cinema, an unfairly pilloried woman, and the greatest of all Hollywood scandals. This is a mystery story, but it’s much more than that. It surveys the birth of the movie industry and its development from the earliest experiments to the sound revolution. It examines the practice and business of making comedy. It covers a monumental censorship debate and early battles in the culture war. It looks at how the press reported on celebrity and scandals. It is a story about fate and how two lives were decimated, only because they briefly connected.