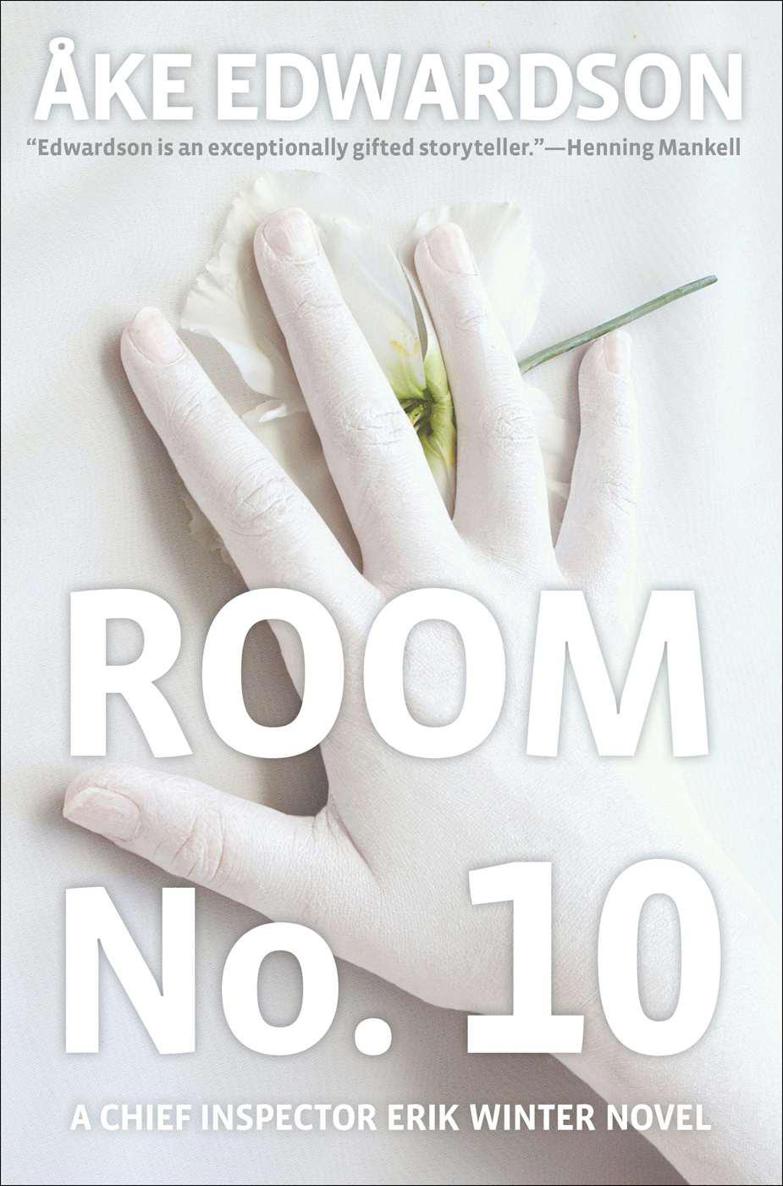 To my father, Karl-Erik

T
he woman’s right eye was blinking. One, two, three, four times. Chief Inspector Erik Winter closed his eyes. When he opened them again he saw that the blinking continued, like a spastic movement, like something alive. Winter could see the August light reflected in the woman’s eye. The sun sent a ray through the open window. Winter could hear the morning traffic down on the street; a car passed, a streetcar clattered in the distance, a seabird screeched. He heard steps, a woman’s heels against the cobblestones. She was walking quickly; she had someplace to go.

Winter looked at the woman again, and at the floor under her. It was made of wood. The ray of sunlight carved its way through the floor like fire. It continued through the wall, into the next room, maybe through all the rooms on this floor.

The woman’s eyelids trembled a few more times. Take away those damn electrodes now. We know now. He moved his eyes away from her. He saw the curtains in the window billow from a slight breeze. It brought with it the scents of the city as well as the sounds. The smell of gas, the oil perfume. The salty scent of sea, he could smell it. He thought suddenly of the sea, and of the line of the horizon, and of what lay beyond. Of journeys, he thought of journeys. Someone said something in the room, but Winter didn’t hear. He was still thinking of journeys, and of how he would have to go off on a journey through this woman’s life. A journey backward. He looked around in the room again. This room.

The desk clerk had been on an errand to the room; it was still unclear why.

He had rushed up to her.

He had called from there, on his cell phone.

The county communications center had sent an ambulance and a patrol car to the hotel. The police car had driven the wrong way on a one-way street. All the streets were one-way in the old neighborhoods south of Central Station.

The two detectives, a man and a woman, had been shown to the room on the third floor by a woman who looked very frightened. The desk clerk had been waiting outside. The door had been open. The police saw the body on the floor. The desk clerk had explained in a thin voice what he’d seen. His gaze had searched its way into the room, as though it belonged there. One of the police officers, the watch commander, the woman, had quickly gone into the room and knelt next to the body, which lay in an unnatural position on the floor.

The noose was still pulled tight around her throat. There was an overturned chair a meter from her head. There was no life in her face or in the ruptured eyes. The commander felt for a pulse that didn’t exist. She looked up and saw the beam that crossed the ceiling. It looked strange, medieval. The whole room looked medieval, like something from another world, or from a film. The room was neat, aside from the overturned chair. She could hear the ambulance howling through the open window now; first from far off and then loudly and brutally as it slowed down on the street. But it was a meaningless sound.

“Call forensics,” she said to her colleague.

Now the examiner was taking away the two electrodes she had stuck next to the woman’s right eye. There was nothing she could fix here anymore, but she could try to determine how long the woman had been dead. The closer she was to the moment of death, the
stronger the contractions of her muscles. The moment of death, Winter thought. It’s a strange phrase. That is a strange method.

The medical examiner looked at Winter. Her name was Pia Eriksson Fröberg. They had been working together for nearly ten years, but to Winter it sometimes felt as if it had been twice as long. That might be a result of the crimes, or of something else.

Winter nodded. He looked at his watch. It was quarter to eleven. The woman had died in the early morning, or late at night if one preferred. It had been dark outside.

He looked around the room. The three forensics technicians were working with the chair, with the beam, with the floor around the woman, with the few other pieces of furniture that were in the room, with everything that might yield clues. If there were any. No, not if. A perpetrator always leaves something behind. Always. If we don’t believe that, we might as well pack up and head out into the sunshine.

The flash from the camera caused the room to take on a different light at uneven intervals, as though the sun outside also wanted to be a part of the action in here.

Winter looked at the woman’s right hand. It was painted white, bright white, snow white. The paint was dry; it extended halfway up to her elbow. It looked like a grotesque glove. White paint. There was a can on the floor, on a sheet of newspaper, as though the most important thing in this room was to protect the floor. More important than life.

There was a paintbrush on the sheet of newspaper. The paint had run out a little bit, over a photograph that depicted a city in a foreign country. Winter recognized the silhouette of a mosque. He could smell the paint when he stood nearby, when he knelt.

There was a sheet of paper on the room’s only table.

The letter was handwritten and barely ten lines long. Maybe she’d written it somewhere else. There were no pads of paper, no pens in the hotel room. Room number ten. The numbers were made of gilded brass; they hung from the door on a nail. The third floor of four. Inside, a scent lingered after the window had been closed. It was sweet, but that word has many implications.

Winter picked up the copy of the letter from his desk and studied the handwriting again. He couldn’t tell whether her hand had shaken as she wrote her last words, and he hadn’t yet been able to compare them with other words, with other writing by her. They had sent everything to SKL, the national forensics lab—the letter and other things the woman had evidently written.

That’s where she had put the first period. Then she had written the next lines and then it had happened. No matter what happens to me. It was repeated two times in the letter to her parents, written with what Winter thought was a steady hand, even if the technicians thought they saw tremors under a microscope.

The hand that she’d used to write the letter that Winter held in his own hand. He looked at it. He couldn’t see it shaking, but he knew that it could be. He was still human, after all. Her white hand. A perfect painting. Or a hand made of plaster. Something that no longer belonged to her. That might as well be removed. That’s what he had thought of. He wondered why. Had someone else thought the same thing?

Her name was Paula Ney and she was twenty-nine years old and in two days she would have turned thirty, on September 1. The first day of fall in Sweden. She had her own apartment, but she hadn’t
been living there the past two weeks because the landlord was renovating and the workmen went from apartment to apartment and then back again; one hour here, one hour there, and the renovation was going to take a very long time. She had moved back to her parents’ house.

Early yesterday evening she went to the movies with a friend and after the show they each had a glass of red wine at a bar in the vicinity of the theater and then they parted at Grönsakstorget. From there, Paula would take the streetcar, she had said, and that’s where the traces of her stopped until she was discovered in the room at Hotel Revy the next morning, one and a half kilometers east of Grönsakstorget. There was no streetcar that passed Revy. It was a strange name.

The hotel was also strange, as though it had been left behind from a worse time. Or a better one, according to some. It was in the dense neighborhood south of Central Station, in one of the buildings that had survived the demolitions of the sixties. Five blocks had survived, as though this particular part of the city had been in the shadows when the city planners had studied the map, maybe during a picnic in Trädgårdsföreningen just across the canal.

Revy had been there for a long time, and before that a restaurant had been there. It was gone now. And the hotel stood completely in the shadow of the Sheraton on Drottningtorget. There was some sort of symbolism in that.

Revy had also had a reputation for being a brothel. It was probably its proximity to Central Station and the great turnover of guests of both sexes. Most of that was over now; the rumors and the reality. Winter knew that the trafficking team took a look at the place sometimes, but not even the whores and the johns were at home in the past. Maybe the owner had been charged with pimping one time too many. God knows who stayed there now. Hardly anyone. The room they had found Paula Ney in had been empty for three weeks. Before that, an unemployed actor from Skövde had stayed there for four nights. He had come to the city to audition for a television series but
hadn’t gotten the role. Just a small role, he had said on the phone with Winter’s colleague Fredrik Halders: I was going to play dead.