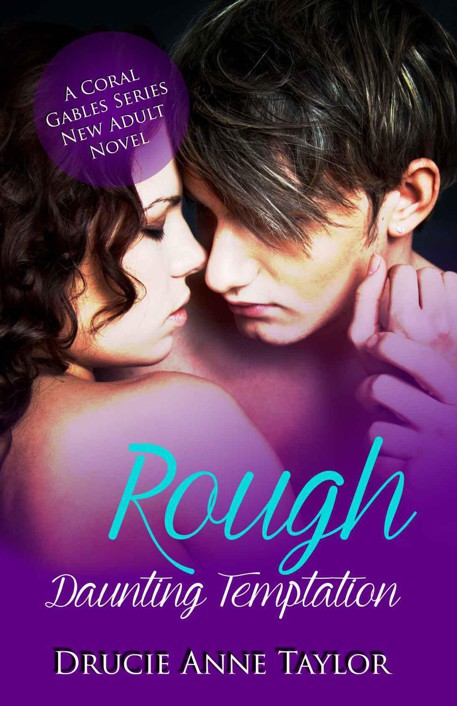 Excerpt of Poppy J. Anderson's 'Let's Kiss and Make Up'

Kontakt: [email protected]
http://drucieannetaylor.com
This book is a work of fiction. Names, places, characters and incidents are either the product of author's imagination or are used fictitiously and are not to be construed as real. Any resemblance to actual living or dad, businesses, organizations, events or locales is entirely coincidental.

All rights reserved. No part of this book may be used or reproduced in any manner whatsoever without my written permission, except in the case of brief quotations embodied in critical articles and reviews.

First published in German in March 2014 as

The Coral Gables series unfolds the love stories of a group of friends. Though characters may reappear, each book can stand alone, and be read on its own.

Miami, the Coral Gables I describe exists only in my imagination.

The next book is about Avery, Delsin's and Camille's best friend.

"Rough! Rough! Rough!" the crowd around the half pipe barks, while I try to follow the numerous jumps and figures the two skaters deliver. This is one battle in a larger competition. Delsin Rough is the undisputed champ on campus, and probably everywhere else in his life, too. He's a frat boy, a fact that I personally can’t stomach, but if you think that's what you need to succeed, well, by all means, go for it. My name is Camille Brooks and I am nineteen years old. I am still a freshman, but have almost finished my first year, majoring in biology and chemistry. The summer break is not far off and I look forward to being back home.

Delsin Rough is, as his name indicates, a rough and tough guy. He is tall, usually wears a baseball cap and seems to like grunge music, because that is exactly what he dresses like. His father is some pro skater who is famous enough to lend his name to computer games. The ideal boyfriend for all the girls on campus, because he is filthy rich and thus has no need of a college degree, but to me, he's just as much of a poser as all the other frat boys. He is a member of some fraternity at the University of Miami, which the students usually refer to as 'the U'. How come I know all of that? Well, people talk about him a lot. He's every bleach-blonde's crush, and makes every smart person gag. I include myself in the second category. I don't know why I even bother listening to all those stories about him. It's probably my best friend Hailey's fault, who ended up on the back seat of his car with him, and has studiously avoided his presence ever since. Thalia, who shares an apartment with Hailey and me, has also gone through the Delsin Rough experience.

I cannot count the times I have stumbled upon some guy's clothes in our living-room, just because the two of them think it is mandatory that they chalk up a high score of sins during their college years. God, that makes me sound like a total prude, which I assure you I am not.

"Hey, Sweets," Avery calls over. Once we got to know each other a little better, he and I have become good friends.

"Hey, bubble butt," I grin back at him, before turning again to the two contestants on their boards.

"Man, look at the jerk showing off again," Avery says with a smirk when he starts watching Delsin's antics with me. I should add that Avery and Delsin are best friends, which ought to make me his enemy, too, but I am able and willing to discriminate between pal and moron.

"Does he ever do anything else?" I ask in an irritated voice.

That is also Hailey's fault. She dragged me here, only to leave with some guy I recognize from a few of my classes. Nathaniel or something, not that it matters.

"Come on, Camille, don't be so hard on him. He simply enjoys his life," Avery chides me for my griping.

"Well, so do I, but that doesn't mean I act like a harem girl or some oriental sheik," I snap.

Avery starts laughing. He practically shakes with it. "That's a good one. I think I will call him that from now on."

I giggle. "Go ahead and do it. And don't forget to mention it came from the bottom of my heart."

"You really cannot stand him," he states, not for the first time.

"I really cannot. He screwed both my best friends and then dropped them as if they had … what do you always say? Butt cooties? Yeah, I know only small boys are said to have those, but the whole thing was very shitty of him," I insist.

"Rough! Rough! Rough!" Now the rapt audience is cheering and making goo-goo eyes at the jerk. He's the university's shining star, while I am a little twinkle. And just for the record, I like being a twinkle and don't want to change my status, not at all.

"Are they finally done here?" I ask, annoyed.

"Looks like it. Come on," he says and grabs my hand. Then he pulls me through the throng, all the way to the edge of the half pipe, where Delsin was performing his act just seconds before. We have barely reached the spot when he approaches us.

"Hey, pal. Howzit? Who's the doll you're holding hands with?" Delsin greets Avery.

"The doll has a name,” I pipe up sharply before Avery gets the chance to answer.

Dark green eyes look into my brown ones. "And what would that be?”

"That, on the other hand, is none of your business. All you have to remember is that I am not a doll!” I rant at him.

Delsin raises his hands in defense. "Whoa! No need to flex your claws, kitty-cat.”

Avery is smirking again. "And this is my friend Camille.”

"Camille, this is Delsin Rough,” he introduces his friend, whom I have managed to avoid successfully so far.

"Nice to meet you, Camille. I don't think I'll offer you my hand. I have a feeling you'll rip it off my arm instead of shaking it,” Delsin grins.

I have a mind to sock him. I am repelled by his self-assured air and this attitude that signals he thinks himself the most irresistible guy who ever walked the earth. "Don't worry, I won't rip out your 'spirit fingers'. Wouldn't want to keep the sheik from pleasuring his harem,” I shoot back and look at Avery. "I'm out of here. Hailey left with some guy anyway, so there's no need for me to hang around and put up with this crap.”

"All right, Sweets. Will I see you later?” Avery asks.

I feel the heat rising in my face unbidden. "Um … If you want to.”

Before I even think about it, I make a fist and sock him in the arm. "Shut up, stupid.”

Wide-eyed with surprise, Avery stares at me. Then he grabs me by the arm and pulls me away from Delsin. "Okay, I get it. You really cannot stand him, but there's no need to beat up my best friend,” he smirks.

"Oh, he deserves more than a beating. How about some tarring and feathering,” I grumble.

"I know, but I've known him since we were kids, and … Keep calm, Camille. It's totally unlike you to be so easily miffed.”

Avery flashes his gleaming white teeth in a broad smile. His dark blue eyes sparkle, and then he hugs me softly. "You're a cute one, Sweetie Tweetie. I'll pick you up tonight. We're going to a fraternity party, so make sure to glam up.”

I hug him close for a moment and then let go. "Okay. What time?”

"I'll drop by around eight.”

He wears his black hair a little too long. It flutters in the sudden wind, while his eyes seem to sparkle again. Avery is a great catch, but I have promised myself I would never fall for a womanizer – though Avery can be counted among the down-to-earth, the diligent – for they are never yours alone. This may sound stupid, but I imagine a nerdy guy for me. Not some scruffy hardcore gamer, but a smart mind with a handsome face, albeit not so pretty as to attract scores of whimpering girls.

"See you tonight, Sweets.” Avery leans down and kisses me lightly on the forehead. "Looking forward to it.”

I wink at him and then force my way through the crowd of Barbies gone wild, who all want a piece of Delsin.

Whatever. I am eager to go home now, and seeing that it's going to take me an hour to get there, I will have to take a shower right when I arrive. Four hours till eight. I ought to freshen up and make some time to study before I get ready and glam up, as Avery called it.

I finally reach my car, an old Ford Mustang. It's a real muscle car, and I simply love it. My stepdad gave it to me for my 16th birthday.

After I have opened the convertible top of my red Mustang, I get in and start the engine. I don't have the slightest clue what to wear. Maybe the little red halter-neck dress? It highlights my legs nicely and looks damn hot. A few weeks ago, Avery picked it out for me on a shopping trip, and I haven't had the opportunity to show it off yet.

Yes, the red dress will look good with the black heels.

It's almost eight. I pace the apartment nervously, if you can call it pacing on high heels. Hailey and Thalia have been hoarding some bottles of beer, and I swiped one, drinking it to loosen up a bit. There is a knock on the door. I turn around too fast, tripping and falling headlong to the floor. "Shit," I curse while scrambling back into an upright position. I only hope my hairdo hasn't suffered. Okay, I didn't try anything extravagant, but I would like my long hair to stay the way I combed it. Another knock. "Alright, alright, I'm on the way," I yell and hobble to the door.

For a moment I wonder why my friends aren't here, but it does not matter really. I finally open the door. "Hi, Avery," I smile, and he pulls me into an embrace.

"Sweetie Tweetie, you're looking damn hot in that," he greets me and lets me go. I twirl before his appreciative eyes.

He leans in and kisses me on the cheek. "And you also smell heavenly, as usual," he adds.