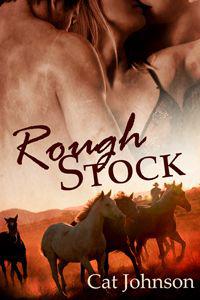 The heart wants what it wants…

Bronc riders Mason and Clay have shared both good times and bad as best friends, but they never expected to share their boss’s daughter, April. Can two friends love one woman, body and soul, without it destroying them?

The heart wants what it wants. For April that means not choosing between the two cowboys she loves, no matter how wrong it may seem inviting them both into her bed.

Life sends the three lovers in opposite directions, but a devastating injury brings them all together again. Their relationship now is no less bittersweet—or complicated—than before. Once severed, old ties leave scars that are tough to heal…

This book has been previously published and has been revised and expanded from its original release.

Warning: When you choose a man who thinks 8 seconds is a long time, perhaps you need two of them. In other words: Watch out, this book contains hot ménage sex with two cowboys and the woman they love.

Thanks to all of my boot-wearing muses, be it cowboy or combat. I am especially grateful to Mike Short, the bull rider who rode to my rescue with the rodeo facts. And of course, to Sean Abbott and his squad for the Afghanistan battle-scene details and the original idea to feature a rodeo cowboy turned soldier. Any inaccuracies or liberties taken with the facts in any of these arenas are strictly my own.

The sudden appearance of pale, silky, feminine stomach stopped Clay Harris dead in his tracks. His greedy eyes devoured the smooth, firm skin shadowed beneath the newfound lushness of her breasts.

He swallowed hard. “April Elizabeth Carson. What do you think you’re doing?”

She paused to look at him, one hand stopped in mid-motion as it tugged the hem of her shirt up over her bra—her white, thin, lacy bra. “What? It’s hot. I’m going swimming.”

“Why? The house is so far and I’m hot now.” Her guileless pale blue eyes proved she didn’t have a clue what she was doing to them.

Clay knew exactly what Mason was thinking when he made the suggestion about the swimsuit. Their good old buddy April, who they’d met when they came to work for her father five years ago, was hot all right, but not in the way she’d meant when she said it. She had filled out over the past school year. April had turned eighteen and out of the blue transformed from an underweight, gangly teenage girl whom they had always treated like one of the guys into someone who was all female. One look at her and all of her new shapely curves and there was no denying it.

Clay swallowed hard. She was going to whip off her T-shirt and shorts and dive into that lake in nothing but her bra and underwear, like she had done at least once or twice each summer whenever the heat got unbearable. But this time, unlike the others, his raging eighteen-year-old male hormones would not be able to ignore it. Nor would she be able to ignore his hard-on, which was already starting to wake up just at the thought.

“Shit,” Mason drawled out softly next to him as April did exactly as they feared, and what Clay suspected they both secretly wanted.

Stripped down to white bikini undies and the lace bra that looked nothing like last year’s plain cotton tank-top style one, April pulled the elastic band out of her ponytail to release a tumbling cascade of long blond curls, and then dove into the clear lake water.

Hell, this was way better than sneaking peeks inside the skin magazines when the store clerk wasn’t looking, but April was their friend. Now that she had turned into a woman, enjoying ogling her just seemed wrong, not to mention very weird.

Clay felt the already stifling Oklahoma heat around him ratchet up another notch. He wasn’t convinced it had anything to do with the weather, even though it had never been quite this hot during the last week of the school year before. Now was a hell of a time for the weather to go wonky, Clay thought, as he and Mason watched April’s progress.

She swam beneath the surface, gliding as easily as a fish through the water, before surfacing with a splash and a shake of her long, wet hair. Fish? Hell, she was more like a mermaid, and every man’s wet dream.

“Aren’t you two coming in?”

Hands buried deeply in both pockets, Mason surreptitiously adjusted himself within his jeans and glanced quickly at Clay. “Um, we need to get to the farm and start breaking that green horse your daddy just brought in or he’s gonna tan our hides.”

Barely comprehending Mason’s excuse over his own lusty thoughts, Clay nodded at whatever his friend had just said.

“Fine. I’ll get out. It’s no fun swimming alone.” With a pretty pout worthy of a centerfold, April stood, the water sluicing off satin skin that Clay longed to run his hands over, his tongue too while he was at it.

She began walking toward them, her water-soaked bra and panties so see-through she might as well have been wearing nothing. Though somehow this was more enticing.

Clay swallowed again and nearly choked. He realized he had no spit in his mouth, even though he seemed to have plenty of sweat on his palms. He wiped them on the denim covering his thighs while what he really longed to do was reach down and adjust himself, because the seam of his stiff jeans was not doing his now wide-awake hard-on any good.

Before them, April bent over to grab her clothes off the grass, revealing the tops of two creamy breasts. Clay had barely noticed the plump globes above the scalloped edge of her bra before. He’d been too distracted by the dusky traces of her nipples through the wet material, not to mention the barely visible outline of the pale curls beneath her undies that proved she was a natural blonde.

Mason hissed out a breath next to him. “Crap, Clay. This just ain’t right.”

Clay didn’t take his eyes off April as she dressed, wiggling and jumping to get her clothes on over wet skin. The act was somehow as enticing as a striptease, only in reverse. As April sat on the grass to pull her boots on, Clay asked, “What ain’t right?”

A quick sideways glance told Clay that in spite of his sudden moral protest, Mason hadn’t taken his eyes off of April either. Clay grinned at him. “Yeah, but now she’s our really hot female friend.”

Mason finally broke his gaze from the sight that consumed them both to look at his buddy. He let out a resolution-filled sigh. “Yeah, she is, but how do you reckon we decide which one of us gets to take a shot at having her?”

Clay raised a brow.
Shit.
He hadn’t considered that, but it was more than obvious, based on the physical evidence, that they both wanted her. Two of the Three Musketeers splitting off to be a couple while the third stood by and watched was not going to work well for the group dynamic.

“What are you two whispering about?” Suddenly, April was beside them, her still-loose hair dripping down her back and over her shoulders, insuring that her white T-shirt stayed nice and wet and translucent just a little bit longer before the summer sun dried it and ruined the view.

“Nothing. Come on. I can’t wait to get my hands on that new stock.” Clay realized the new horse wasn’t the only thing he couldn’t wait to get his hands on.

He also realized that turning a good friendship with April into an even better one would surely be nice, but losing his best friend, Mason, in the process would suck.

One last thought crossed his mind as his pants felt tighter than ever—he realized that riding a horse with a hard-on was going to really suck too. Clay sincerely hoped his dick went down before he had to get up in the saddle or he’d be one unhappy cowboy. Next to him, Mason pulled his hat lower over his eyes and concentrated overly hard on the ground at his boots. Clay would bet this week’s paycheck from April’s daddy that Mason was thinking the exact same thing. They both had better rein in their hormones.

“Clinton asked me to go to the prom with him next week.”

At April’s announcement, Clay tripped over the toe of his boot and came to a sudden, jolting stop in the road, Mason nearly running into the back of him.

Clinton was the quarterback of their high school football team, on top of having a rich daddy and a full-ride athletic scholarship to one of the big schools back east. He had everything cowboys like Clay and Mason, who worked for a living and couldn’t afford college, didn’t have. Clay could handle losing April to Mason if it came down to it, but he’d be damned before he let Clinton get April on top of everything else the privileged ass already had.

He tried to make his voice sound casual. “What’d you say to him?”

April shrugged. “I told him I’d give him an answer tomorrow.”

Mason gave his hat a shove backwards so he could look April in the eye. “What are you going to tell him?”

Yeah, Mason was no happier about this than Clay. Even if April hadn’t abruptly turned into a hottie they wanted for themselves, Clay still wouldn’t want her anywhere near Clinton. The guy had a hell of a reputation as a womanizer already, and he had only just turned eighteen. Clinton took after his daddy, if rumors were anything to go by. Clay knew that usually there was a bit of truth in even the most outrageous gossip. It was hard to keep a secret in a small community like theirs.

April looked from one boy to the other. “I’ll probably say yes since you guys aren’t going, right?”

Mason frowned beneath the brim of his hat. “We can’t. You know we’re both signed up to ride in the rough stock competition in Elk City that day. It’s the big championship.”

The Pirate Takes A Bride by Shana Galen
Sebastian (The Beck Brothers #2) by Large, Andria
TemptressofTime by Dee Brice
The Witch Collector Part I by Loretta Nyhan
Close Obsession by Zaires, Anna
Imperial Assassin by Mark Robson
A Fairytale Bride by Hope Ramsay
The Evening News by Tony Ardizzone
Bad Things by Michael Marshall
The Muse by O'Brien, Meghan
Our partner