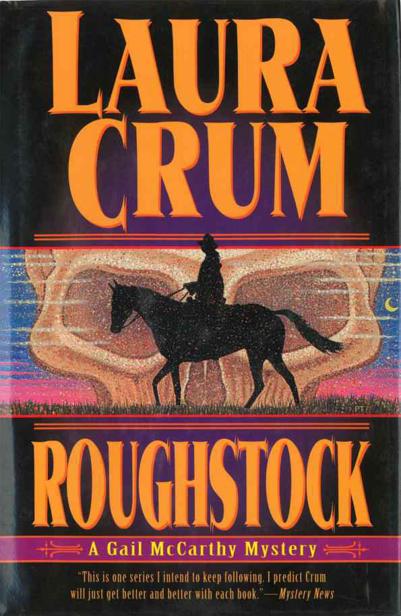 ROUGHSTOCK.
Copyright © I997 by Laura Crum. All rights reserved. Printed in the United States of America. No part of this book may be used or reproduced in any manner whatsoever without written permission except in the case of brief quotations embodied in critical articles or reviews.

For Bill, with love, always.

With thanks to my mother, Joan Awbrey Brown, who bought ET, and my father, Barclay Kirk Brown, who helped buy Freddy-strictly out of the goodness of their hearts and despite a distinct lack of interest in horses.

Thanks also to Sue Crocker, Wally Evans, Brian Peters, and Craig Evans, DVM, the friends who have helped me with my horses for many years and provided much of the inspiration for these stories.

I would also like to thank everyone at Adobe Animal Hospital, my real-life veterinarians, who put up with my questions more or less patiently (especially Craig), and Lieutenant Patty Sapone of the Santa Cruz Police Department, who advises me on cops and their ways. All mistakes are mine, and probably arise from not asking enough questions.

Finally, I'd like to thank all the ropers, cutters, horse trainers, ranchers, packers, and working cowboys with whom I've spent many happy hours on horseback. These books could never have been written without you.

All the human characters in this book are completely imaginary and are meant to resemble no one, living or dead.

Both Santa Cruz County and Lake Tahoe are real places, but they have been altered significantly to fit the purposes of the story. Imaginary towns, ranches, restaurants, casinos, streets, parks ... etc. have been created where none exist, and the reader should not imagine that any of these places resemble the real casinos, ranches ... etc. that do exist and might not be flattered by the comparison.

I
threw my clothes bag down on the elegantly carpeted floor of the Foresta Hotel in Northshore Village, Nevada, and stared out the window at the gray-blue expanse of Lake Tahoe. White-frosted pine trees and a backdrop of snowy peaks made the view even more spectacular than usual. I was here, at last, on my first vacation since I’d
gone to work as a veterinarian, two and a half years earlier.

Well, almost a vacation. I was actually attending the annual Winter Equine Seminar, a three-day session of lectures on horse health problems. The interesting thing about the seminar was that classes were held from seven to ten in the morning and from four until seven in the evening. This left the middle of the day free for skiing, which was the point, more or less.

Skiing. I hadn't been skiing for three years. Nor had I been up here in the Sierra Nevada Mountains-to my way of thinking the most beautiful place on earth. Saying I was thrilled would be putting it mildly.

Blue stretched stiffly on the floor next to me and wagged his stump of a tail to get my attention. I reached down and rubbed his ears, not taking my eyes off the view. I’d
smuggled the old dog in moments ago in an extra-large duffel bag I kept for the
purpose. He knew the routine; he held perfectly still while I zipped him into the bag and carried him up four floors to my room. At thirty-five pounds, about average for an Australian Cattle Dog (also known as a Queensland heeler), Blue's weight was awkward but not prohibitive, and I'd been smuggling him into hotel rooms since he was a fluffy gray puppy. Now he was fourteen years old and then some, and I hadn't been willing to abandon him, even for a few days. Who knew when they would be his last?

I sat on the bed for a few minutes, rubbing the old dog's head and taking it all in, then switched my eyes to the clock. Five-fifteen
P.M.
I was due to meet Joanna at five-thirty. Time to get ready.

A glance in the mirror made me decide quickly that the chambray shirt, Wrangler jeans and tennis shoes I'd worn for the drive up here were much too casual and crumpled for dinner at a nice restaurant and a night out gambling. Choosing a cream-colored silk blouse that I loved, I pulled on some clean dress jeans and slipped my feet into soft doeskin flats. Adding a string of fresh-water pearls, I evaluated myself as I brushed out my rambunctiously wavy dark hair and confined it in a silk cuff. I decided that a little blush and lip gloss and I'd do.

Giving Blue's head a final rub and telling him to be a good dog and be quiet-barking would get him kicked out of the Foresta for sure-I turned on the TV, hung a Do Not Disturb sign on my door, and headed down the stairs to the hotel coffee shop.

The place proved to be all mirrors and chrome, crowded with so many green plants and their reflections that it looked like a confusing jungle. It
took me a moment to orient myself, and while I was trying to decide which of the arched entrances were real and which were illusions, I heard a low-voiced "Gail," from off to my right.

Joanna Lund, who had been my closest friend at vet school, and whom I hadn't seen in three years. I slid into the booth
across from her, my smile of greeting masking a look of curious appraisal.

Scandinavian, small, and slender, Joanna had always seemed uninterested in her high-cheekboned good looks when we were in college together. She chopped her blond hair short and didn't fuss with it, wore no makeup, and dressed exclusively in jeans, boots, and man-tailored shirts. Of course, she still looked wonderful, but it was obvious that wasn't the point.

Joanna and I had never engaged in a single conversation that I could remember on clothes, diets, hair styles, or men, subjects that I, like most women, have done my fair share of chatting about. Joanna and I talked exclusively of horses and their health problems. She had determined to become a horse vet when she was fifteen and she'd pursued her goal with a single-minded intensity that excluded men and, to a large degree, friends.

In fact, it was her intensity that had drawn us together. She seemed to be the one person in my class at vet school who, like me, was driven by a need to achieve that rendered boyfriends, parties, and general carousing irrelevant. My parents were dead, and Joanna's were divorced, poor, and uninterested in financing her schooling. We both worked hard as waitresses, had grants, lived in the same crummy apartment building, and studied for all we were worth. It
made a bond.

"Well, thanks," I said, pleased and slightly confused. It
was unlike the Joanna I remembered to mention looks. "You, too."

She shrugged off the compliment and asked, "So what have you been doing?"

"Slaving away. This is my first vacation in years."

"I've met him, years ago. I have an aunt who lives in Santa Cruz."

We smiled at each other again; I was registering little details that hadn't struck me immediately. Joanna's blond hair was still short, but now it was cut in a neat wedge. She still wore a tailored shirt, but this one was a soft pink that flattered her fair skin, and it looked expensive, as if it had come from a designer, rather than the men's department of the nearest discount store. There was a gold locket at her throat, and I thought I detected signs of the same slight application of blush and lip gloss that I used myself. Joanna had changed, after all.

I wondered suddenly why our estrangement since vet school had been so complete. We'd called each other on the phone a couple of times in the last few years; that was it. I knew only that she was practicing as a vet in Merced, a town in California's Central Valley; she knew I lived and worked in the coastal city of Santa Cruz, where I had been born and raised. Perhaps our friendship was based so exclusively on the struggle to survive vet school that there was nothing left of it when that ordeal was behind us. At this point, after three years out in the real world, we were virtual strangers to each other.

I was about to break the rapidly growing awkward silence and ask her what was new in her life, when a familiar booming voice greeting someone in the front of the coffee shop caught my attention. It caught Joanna's, too, and we both stared at a tall man clapping a seated diner on the shoulder.

"Who else?" I was less awed, mostly because I knew Jack a little. In point of fact, everybody in the livestock business in central California knew Jack Hollister, or knew of him. Jack was a living legend.

As far as I was aware, he was the only person who had ever put himself through vet school on the money he made riding bulls and broncs on the rodeo circuit. To top that off, he had parlayed the money he made as a horse vet into ranch land, and had invested so successfully that he'd become a modern-day cattle baron. Nowadays he was mostly retired from veterinary work and spent his time going team roping and keeping tabs on his various properties.

Jack had been born and raised in Santa Cruz on a small family ranch that he still called home, and until Jim Leonard, my boss, had moved into the area, Jack was the only horse vet in Santa Cruz County. He still did occasional work for old-timers who "wouldn't use anyone but Jack," and I sometimes ran into him in his professional capacity.

More often, I ran into him at ropings. My steady boyfriend, Lonny Peterson, was a team roper and had been teaching me the sport. In the last few months I'd attempted a little low-level competition, with no great success as yet, but I was having fun and enjoyed going.

China Dog by Judy Fong Bates
Lyndley by Renee, K.
Fingersmith by Sarah Waters
Cross Roads: Pick a Path by Janaath Vijayaseelan
Savage Urges by Suzanne Wright
Free For Him by Sophie Stern
The Changelings Series, Book 1 by Christina Soontornvat
The Disaster Profiteers: How Natural Disasters Make the Rich Richer and the Poor Even Poorer by John C. Mutter
Inappropriate Behavior: Stories by Murray Farish
I'm with Stupid by Geoff Herbach
Our partner