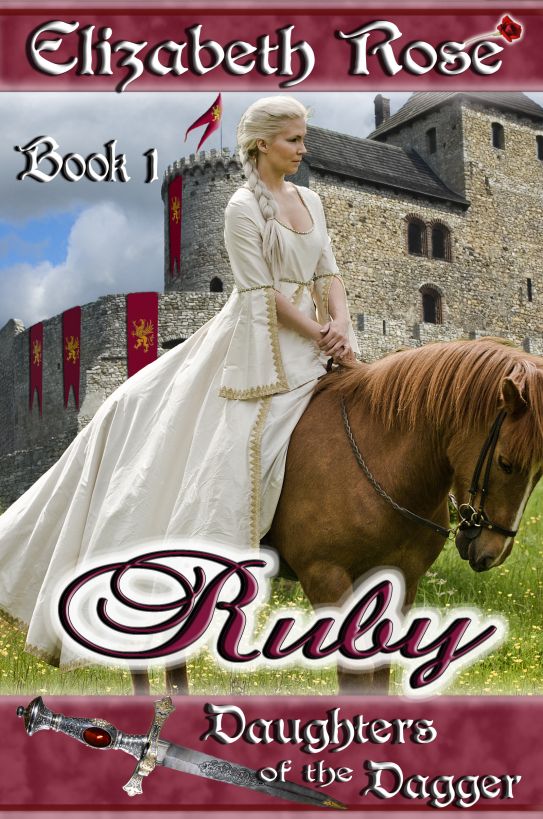 Book 1
Daughters of the Dagger

This ebook is licensed for your personal
enjoyment only. This ebook may not be re-sold

or given away to other people. If you would
like to share this book with another person, please purchase an
additional copy for each recipient. If you’re reading this book and
did not purchase it, or it was not purchased for your use only,
then please return to Smashwords.com and purchase your own copy.
Thank you for respecting the hard work of this author.

This is a work of fiction. All characters,
names, places and incidents are either a product of the author’s
imagination or used fictitiously. Any similarities to actual
organizations or persons living or deceased is entirely
coincidental. All rights reserved. No part of this book may be used
or reproduced or transmitted in any form whatsoever without the
author’s written permission.

(Legacy of the Blade Series)

Lord of the
Blade

Lady of the
Mist

(Daughters of the Dagger Series)

Daughters of
the Dagger – Prequel
(Free)

The Dragon and
the Dreamwalker

The Duke and
the Dryad

The Sword and
the Sylph

The Sheik and
the Siren

The Oracle of Delphi

The Caretaker of
Showman’s Hill
(vampire)

Curse of the
Condor
(jungle)

Lady Ruby de Burgh of Blackpool steadied her
lance - the old handle off a worn broom - and rode her mare full
force toward the roughly made quintain she’d constructed. Leftover
broken lances she’d scavenged off the knight’s practice field were
put to good use by her creative abilities. She’d constructed her
own quintain of a tall post mounted on a wide base, anchored down
with boulders. Atop it sat a cross-arm that swiveled when she hit
it.

The moist earth flew in all directions as
her horse thundered over the ground, bringing her closer to her
target. She raised the stick, fastened her sight on the center of
the painted red and white broken shield, and pulled her arm back,
ready to hit it dead center.

“Ruby!” came her father’s voice from
somewhere behind her. It was enough to distract her and cause her
to miss her mark. The broom handle smashed into the wooden arm of
the quintain instead of the shield, and she lost speed. The sandbag
on the opposite side of the crossbar swung around, hitting her in
the center of her back.

“Ooomph!” Her breath was forced from her as
the sandbag continued its revolution, but not before unseating her
from her horse and landing her in the center of a huge mud
puddle.

“Lady Ruby, how many times do I have to tell
you to stop acting like a man!” Her father, Talbot, Earl of
Blackpool, stood just outside the wooden rail of the lists. Beside
him stood his steward, Severin, and also a tall handsome man she’d
never seen before.

Ruby flipped her muddy, long blond braid
over her shoulder and proudly got to her feet in ankle-deep
mud.

“Papa, I am not acting like a man.” She
smoothed down her crumpled, torn and dirty gown, and tried to sound
more mature than her age of twenty years.

“Then what do you call this nonsense? Riding
a horse astride and performing feats of knights?”

She knew her father was only upholding his
image in front of the other men, as he’d seen her practice her
version of jousting many times before and had never reprimanded
her. But she’d obviously embarrassed him now at a most
inappropriate moment. She knew she should act the ever-obedient
daughter of an earl as was proper, but the burning desire within
her to act of her own accord made her speak boldly.

“The quintain is an extraordinary device
that can quicken one’s reflexes and sharpen the senses. I don’t see
why women aren’t allowed to use it too.”

The deep laugh of the man standing next to
her father only rattled her nerves. She didn’t see what was so
amusing. Being one of four daughters of an earl was hard enough,
not to mention eyebrows always lifting because of her attraction to
unladylike activities. But she’d spent most her time as a child
sneaking away to the armory to look at the weapons, or in the
stable coaxing the stablemaster to let her ride the warhorses
mounted in a man’s saddle.

She’d even cut short all her hair when she
was ten and dressed like a page, joining a hunting party of men off
in the woods for days. That, she had to admit was a mistake. Not
only had she worried as well as infuriated her parents, but she’d
learned more about men’s desires and fantasies of coupling with a
woman than she ever wanted to know. That alone was enough to scare
her into never wanting a man as long as she lived.

Most girls in her position were betrothed at
an early age and already married, or even fostered out to help
assure alliances with other holdings. With four girls in the
family, the ability to supply decent dowries - even for an earl -
became quite costly.

By right, one or two of her sisters or even
she, should have been sent to a convent. But luckily her father
decided against it. He’d never remarried after the death of his
wife, and he’d been so heartbroken to have lost her in childbirth
as well as his only son, that he wanted to keep his daughters with
him as long as possible to help him ease the pain. And he’d made a
promise to his wife on her deathbed not to betroth any of his
daughters but to allow them to find their own true loves instead.
’Twas certainly an uncommon promise for such a powerful man to
make, but then again, there was nothing common about Ruby’s late
mother either.

When her mother was alive, she’d seen
something special in Ruby, and told her that she had a good heart.
She’d also told her she was the strongest of all her sisters and
needed to watch over all of them and help protect them as well.
Ruby had also always been her father’s favorite child. And because
of this, she had never been disciplined with a heavy arm.

Since her mother’s death when Ruby was only
five, she tried harder than ever to make her father happy again.
She’d promised her mother on her deathbed that she would always be
there for her father. And she would keep that promise, and be near
her father’s side always, as she never planned on leaving.

“Ruby, come here. I’d like you to meet Lord
Nyle Dacre from Sheffield.”

Ruby picked up her soggy skirt and sloshed
her mud soaked slippers across the damp earth till she met her
father and his guest at the rail.

“You’re Lord Sheffield?” she asked cocking
her head, squinting from the sun breaking through the clouds. The
summer breeze blew a loose strand of hair over her face and she
swept it away with a muddy finger, leaving her cheek smudged in the
process.

“You’re Lady Ruby, first-born daughter of
the Earl of Blackpool?” he rallied.

“Father, what is the meaning of this?” she
asked, feeling a sinking sensation in her chest. Sheffield’s castle
was far down south and far from the coast as well. He had to have
travelled at least several days in order to get here, so he wasn’t
here on a social visit. She was sure that she wasn’t going to like
the reason behind his arrival, as she could feel it in her bones
that it wasn’t good.

“Surely you’ve heard of Lord Sheffield?”
asked Severin, her father’s steward who had a reputation for a
wagging tongue. He’d been so quiet, Ruby almost forgot he was
there. But if it wasn’t for Severin, she wouldn’t have known all
the horror stories about the infamous Lord Sheffield. Severin had
been telling her tales of warriors for years - her idea of a good
bedtime story. That is, unless she actually had to meet one of the
men of these horrific tales. This in itself was a scary feat.

“And what, my lady, have you heard?” Lord
Sheffield was chuckling lowly again, his dark arrogant head cocked
in amusement. His long oaken hair was well past his shoulders, and
the breeze lifted it gently around his sculpted face. His eyes were
a dark steel grey, and though he was grinning she couldn’t help but
feel the danger that lie beneath his controlled gestures.

Ruby felt her heart thumping loudly and
hoped the man couldn’t hear it too. He was handsome indeed, much
taller than her father, and much younger than the gossip make him
out to be. Still, he was probably close to ten years her senior.
She found herself thinking of the stories Severin had told her
about this dangerous man just recently. Lord Sheffield hid a
thousand sins behind his cool façade, and Ruby wondered how he
could look so calm after all the murders he’d committed.

His cloak was black, lined in satiny purple,
and it reached all the way down to his feet. His tunic and hose
were a slate gray, and the only piece of jewelry was the shiny gold
ring on his finger that bore the crest of the Sheffields - a
gryphon. She decided he reminded her of a gryphon as well. His
narrowed eyes watched her every move and she felt as if he were a
predator and she his prey.

“Ruby!” echoed her father. “Lord Sheffield
has had a long journey, and I advise you to watch that loose tongue
of yours and pay respect or –”

“Three now, actually.” Lord Sheffield met
her challenge with a reply of his own. His silver eyes interlocked
with hers in some kind of defiant battle. She felt his gaze freeze
the blood in her veins, yet heat her in desire in the same instant.
It wasn’t lust that stirred her passion, but rather the spar of
words between them. Like her, this man was not afraid to speak his
mind, or worry what circumstances would develop by his actions.
This was obvious by the way he wasn’t trying to hide the fact he’d
killed off three wives in the past few months.

Ruby liked a challenge. She lived for a
challenge. But being a woman, her life was indeed dull. And though
she feared the man standing in front of her, a strange part of her
welcomed his arrival at their castle after all. He obviously held
some strange form of power within him to be able to make her feel
this way from just a mere look.

“Egads, Sheffield, why do you jest with my
daughter?” scolded the earl.

The Art of Men (I Prefer Mine Al Dente) by Kirstie Alley
THE ALPHAS Box Set by A.J. Winter
Mystery by Jonathan Kellerman
Crash by Vanessa Waltz
The Empire Project: The Rise and Fall of the British World-System, 1830–1970 by John Darwin
My Kind of Girl by Candace Shaw
Witch Hunter Olivia by T.A. Kunz
Tales of the Zombie Apocalypse (Issue #2 | September 2015) by Anthony, Michael
Vivian by Marie, Bernadette
The Dragon and the Witch by K.T. Tomb
Our partner