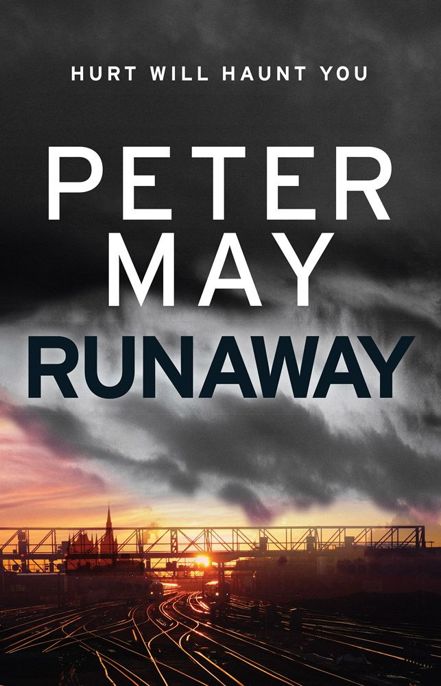 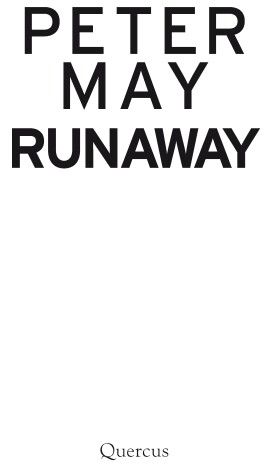 First published in Great Britain in 2015 by

The moral right of Peter May to be

identified as the author of this work has been

asserted in accordance with the Copyright,

All rights reserved. No part of this publication

may be reproduced or transmitted in any form

or by any means, electronic or mechanical,

including photocopy, recording, or any

without permission in writing from the publisher.

A CIP catalogue record for this book is available

from the British Library

This book is a work of fiction. Names, characters,

businesses, organizations, places and events are

either the product of the author’s imagination

or are used fictitiously. Any resemblance to

The Moving Finger writes; and, having writ,

Moves on: nor all thy Piety nor Wit

Shall lure it back to cancel half a Line,

Nor all thy Tears wash out a Word of it.

The Rubáiyát of Omar Khayyám

He wakes in a cold sweat from a dream pervaded by darkness and blood. And after a lifetime of being someone else in another land, he wonders who he is now. This man who, he knows, is fading all too soon. A life squandered for a love lost. A life that seems to have passed in the blink of an eye.

The three weeks since he has returned to these shores have somehow felt the longest of that life. Strange how pain and fear stretch time beyond limits undreamed, while the search for happiness is over almost before it begins. And from some long-forgotten past, lost in chalk dust and warm milk, comes a recollection of relativity.
Put your hand on a hot stove for a minute, and it seems like an hour. Sit with a pretty girl for an hour, and it seems like a minute.

He came by boat. A ferry crossing from Calais. Symbolic of that day so long ago when he had steered his boat through a spring haar to a foreign shore. There had been a moment at passport control. His heart almost stopping as the immigration officer opened his passport. But he had given it the most cursory of glances. Because, of course, no one was looking for him any more. Not after all these years. An old man, pale and perspiring, he had been waved through without a second look. That’s who he is. A stranger here now.

It is dark and hot in this squalid little bedsit, curtains drawn against the lights of the city and the constant thrum of night traffic invading his dreams. What little light there is gradually forms shadows around the room, and for the first time he realizes that something has wakened him. Some sixth sense that warns him suddenly that there is someone else in the room.

For a moment there is silence.

Then a voice swings out of the dark, words like boxing gloves landing soft blows about his head. ‘Relax, old friend. It is time we talked.’ Gentle and almost reassuring.

He knows immediately who it is. ‘How did you find me?’

He hears the other smile.

Then the voice again, condescending, almost chiding. ‘Simon, Simon. It was a simple matter to follow you from the café.’ A breath. ‘How on earth did you manage to stay undetected all this time?’

‘What do you want? Did I not make myself clear?’

‘Then what is there to talk about?’

The shape of a man detaches itself from the shadows and looms suddenly over him. ‘Death, of course.’

Simon hears, more than sees, the movement. The rustle of cotton on silk. And then the soft, cool texture of the cord as it loops around his neck. It tightens with unexpected speed and ferocity. There is no time to cry out. His hands grasp his attacker’s wrists, but the realization comes quickly that he is not strong enough to stop this. Still, he won’t give up the struggle. This is not what he came back for. But what strength he has ebbs quickly, and he becomes aware of a face just inches from his. The little light there is in the room gathering itself into reflections in once familiar eyes. Cruel now, and filled with hate. He feels the other’s breath on his face, like the breath of eternity. Before blackness comes to extinguish light and life for ever.

Slowly his killer releases his lifeless form to fall back on the bed, frail with age but heavier now in death. The click in the dark seems deafening and the light that falls upon the bed, like the dead man, almost shocking.

Hands in latex gloves untie a canvas roll, and open it out on still warm sheets. Light reflects on a choice of five glinting, sterile scalpels. Simon’s nightshirt is rolled back from his left forearm, and one of the scalpels is selected. All performed with the unerring certainty of a man who knows he has all the time in the world for this.

Carefully, and with a well-honed and dextrous skill, the killer starts to cut away the skin of the forearm, effectively flaying it. There is very little blood to stain the bed. For the heart has long since given up any attempt at pumping it around Simon’s rapidly cooling body.

Jack stepped down from the bus almost at the end of Battlefield Road and raised his head towards the darkening sky with a sense of foreboding. He took in the brooding silhouette of the smoke-stained Victoria Infirmary that climbed the hill above the field of battle where Mary, Queen of Scots, was once defeated by James VI, and felt as if someone had just walked over his grave.

He knew, in truth, that he no longer needed his stick. Most of his strength had returned, and the prognosis following his minor myocardial infarction was good. The diet they put him on had successfully lowered his cholesterol and the daily walking, they said, would do him more good than an hour in the gym.

Still, he had grown to depend upon it, like an old friend. He enjoyed the feel of the brass owl curled into the palm of his hand, steadying, reliable. Unchanging, unlike everything else around him.

Gone was the old Queen’s Park School, abandoned, then damaged by fire, and finally demolished. The Battlefield Rest, with its green and cream tiles and clock tower, once a news kiosk and waiting room for city trams, now an Italian restaurant. The red sandstone Langside Library was still there, a final gift from Carnegie, but the infirmary itself, filled for Jack with both formative and final memories, was due for closure, its functions to be replaced by the new Southern General.

His tonsils and adenoids had been removed here as a child. He could still remember the smell of rubber as they put the mask over his face to send him to sleep in the operating theatre, and the line of light beneath the door of his two-bed ward that night, mysterious shadows passing back and forth in the corridor beyond, like dark demons stalking his young imagination.

But as he stepped into the shabby green-painted foyer and breathed in that depressing antiseptic hospital smell, the memory that almost overwhelmed him was of the death of his mother.

Those dark winter evenings he had spent at her bedside, finding her sometimes distressed, at other times almost comatose, and once lying in her own filth. And then, finally, the night he had arrived to find her bed empty. Moved, the ward sister told him, to another building.

It had taken him some time to find her. And when he did, he felt as if he had stepped on to a stage set for some dreadful denouement. A cavernous Victorian ward, chaotic in its arrangement of beds and screens, light in pools barely permeating the darkness. She had gripped his hand, scared by the moans and occasional cries of unseen patients, and whispered, ‘They’ve brought me here to die.’ And then, ‘I don’t want to go alone.’

He had sat with her as long as they would let him. Then visiting time was done, and they told him he must leave. She hadn’t wanted him to go, and his last sight of her was glancing back to see the fear in her eyes.

The next morning a police officer came to his door. The hospital had lost his number – as they always had, no matter how many times he gave them it. His mother had died during the night. Alone, as she had feared, and it had filled Jack with a lingering sense of guilt that had never quite left him.

He had heard that Maurie was suffering from cancer, although he hadn’t actually seen him in years. And when his rabbi called to say that Maurie wanted to see him, it had come as news that his old friend had also suffered a major heart attack. Still, neither piece of news had prepared him for the shadow of a man who lay propped against the pillows of his hospital bed.