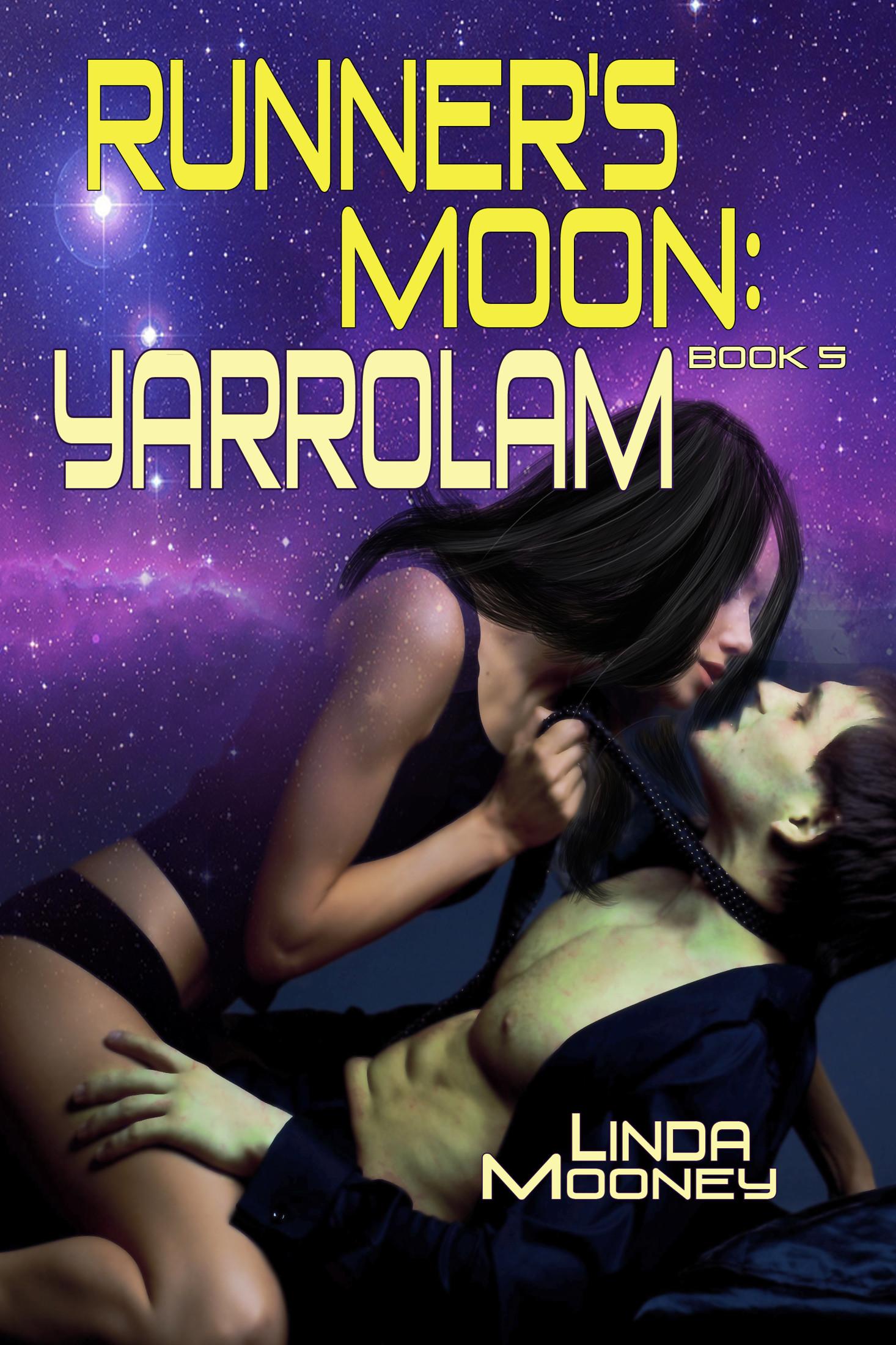 Book 5 of the Runner’s Moon Series

No part of this book may be reproduced or transmitted in any form or by any means, electronic or mechanical, including photocopying, recording, or by any information storage and retrieval system, without permission in writing from the author.

Thank you, Chris B. for your insight and help.

Other books in this series:

“Hey, Liam? You got a minute? Come over here, would you?”

Yarrolam glanced up from his computer. The yell was muted, but it had gotten his attention. Through the half wall of glass separating his office from his partner’s, he saw Aaron Shulcrist waving for him to come over. Picking up the phone instead, he buzzed the man.

“What’s so important you can’t call me?” he asked when Aaron answered.

Through the glass, he noticed Aaron’s scowl. “Hey, man. This is important. I got a favor to ask of you.”

Aaron always had a favor to ask. And it was always important. Yet, there was a tone in the man’s voice which sounded different. Almost panicky. It was enough to rouse Yarrolam’s curiosity.

He hung up and walked around the partition to find Aaron staring at his personal cell phone. “What’s the big emergency?”

“Cherron’s arriving on the six-twenty flight. I’ve got a client meeting at the Mission House at six. Can you pick her up at the airport for me?”

“Why did you schedule a meeting when you knew she was arriving today?”

Aaron made a vague gesture. “I wasn’t thinking. I was busy and forgot.”

Yarrolam gave him a peeved look. “You forgot your fiancée was coming in?”

Aaron went on the defensive, as the man was prone to do anytime Yarrolam put him in his place. “I didn’t forget. I meant I’ve been babysitting this client for well over a week, and he’s finally caved. The man is worth six figures. I can’t pass up this opportunity. Help me out here, Liam. I’ll owe you big time.”

“What if I had plans tonight, too?” Yarrolam countered.

“Like what? Another run in the park? Or a date with a streaming video?”

He sighed. Unfortunately, he knew the man would continue to harass him until he caved. When it was important to Aaron, the guy was relentless. Still, Yarrolam refused to budge.

Aaron made a disparaging sound. “Oh, that’ll go over with a bang.”

“Then rent a limo and have them pick her up,” Yarrolam suggested.

“I’ve already told her you were going to be there waiting for her.”

Yarrolam threw up his hands to show his irritation. “For crying… All right. What airline?”

A smug smile of satisfaction spread across Aaron’s lips. “Triumph Air. And that’s not all.”

“Can you take her out to dinner? Someplace nice? Just until my meeting is over.” He held up his phone for Yarrolam to see the photo. “Here. This is what she looks like. This is Cherron.”

Yarrolam studied the picture of the laughing woman with the distinctive features and wealth of black hair. She wouldn’t be hard to spot.

“Why can’t I drop her off at your place after she gets in?” he asked his partner.

“Then give me yours.”

At this point, Aaron sat up straighter in his chair. “Look. I’ll make reservations at the Hotel Meridian. Hell, I’ll put her up in a suite. I’d rather have her over there than to see my place.”

Yarrolam smirked. “What’s the matter? Maid took the day off?”

“Ha-ha. Funny not, but true. The place is a pigsty. One look, and she’ll call off the wedding and run back home.” The man’s attention turned inward as his unseeing gaze rested on his desk. “I should be so lucky,” he murmured so softly, even Yarrolam’s unique hearing barely caught it. Suddenly, Aaron refocused and threw his partner a smile. “Appreciate the help, buddy. Don’t worry. I’ll make it up to you.”

“Make a note, Aaron. I’ll make sure you do in case you forget.” He glanced at the wall clock. Thirteen minutes to five. “You’d better make those reservations now. I’m going to go ahead and leave. I have to run a few errands before I go to the airport.”

“Sure. Do whatever you need to do. I’ll stay here until the market closes. Say, while I’m thinking about it, did you get the paperwork finished on the Waller account?”

“Done and faxed in.”

“Sure thing. Talk to you later.”

Turning his back on the man, Yarrolam returned to his own office. Normally, he also remained until Wall Street called it a day to get the final tallies. But if he was having to pick up Aaron’s intended at six-twenty, he had to leave his place by five-thirty to get to the airport in time to greet her, barring any accidents on the freeway. It didn’t leave him much time to go by the supermarket and get groceries, as he’d originally planned to do after work.

Giving Aaron a half-hearted wave, Yarrolam hurried out of the office and took the elevator to the lobby. When he reached the parking lot, he noticed the summer sun was already starting its descent for the day. He sighed wistfully. He’d hoped to shed this outer skin and take in a long run through the park after dark. Unfortunately, it would have to wait until he left the woman at the hotel. But, on the positive side, since tomorrow was Saturday, he could stay out later and sleep in come morning.

He dropped by Brittleman’s Grocers to grab something to tide him over until Sunday, then drove to his apartment to toss the perishables into the fridge. On his way out, he paused in front of the hall mirror to double-check his outer self. He’d felt himself slipping a bit inside the store. It was nearing sunset, and he relished sloughing his Earth disguise at the end of each day. It was a way to relieve the stress of the job. So far, he couldn’t see any sagging or gaps in his disguise.

“Hold on, Yarrolam. A few more short hours, and you’ll be able to breathe free again,” he told his mirrored self.

Fortunately, traffic was light, which surprised him. Then again, with it being a weekend, most people would be traveling outbound from the city’s hub. It wasn’t until he hit the loop that the roads got congested. But by then he was less than two miles from the exit to the airport.

He was able to park in short-term parking and make it into the main concourse with ten minutes to spare. A quick check of the arriving flights showed Flight 128 had already landed at Gate 6B. Pivoting around, he hurried toward baggage claim.

The monitor over the carousel let him know where to wait. Standing on the sidelines, he crossed his arms over his chest and kept an eye on the escalator where the passengers would be emerging from the gates. He didn’t have to wait long.

She was the third person on the descending stairway, which told him she’d been sitting in first class. She was searching the room for him, although he doubted she knew what he looked like. Maybe she was looking for a man holding up sign with her name on it.

He’d placed himself where she would have to walk by him. As she neared, he moved aside slightly so she wouldn’t feel as if she was being accosted. She glanced up at him and moved aside, murmuring an “Excuse me.”

Yarrolam started to address her by name, when he caught her scent. Unreality slammed into him, nearly crushing him emotionally.

“Cherron Greene?” He tried hard to control himself, keeping his voice calm and unassuming.

The woman paused in mid-stride and glanced over her shoulder. Her eyes widened, blue-gray eyes with a unique hazel ring on the outer periphery. She gave him a quick once-over.

He managed to paste on a smile and stuck out a hand. “Hi. Yeah, Liam Vost. Glad to finally get to meet you. Welcome to the Big Easy.”

She gave him her hand to shake and a smile to rival the sun. “Hi! Same here. Thank you for coming to pick me up. I got Aaron’s text right as we were pulling up to the gate.”

Her scent wafted over him again. Faint, tantalizing. Unmistakable.

His knees threatened to buckle as he forced to keep his surprise from showing. At first, he hoped it was her perfume. Something floral. But after a quick second sniff, he detected her cologne, subtle yet hidden, like an undergarment. It was musky, triggered by her perspiration. But her overwhelming personal scent was the one that threatened to make his blood simmer.

Another wave of shock like a cold wash of water poured over him. It wasn’t possible. He was mistaken, but after a third breath, he could no longer deny it. His partner’s fiancée was the woman he never believed existed.

The woman meant to be his mate.

His one true and only love.

Cherron tried to keep herself from being too obvious as she sized up the man sitting behind the wheel. Aaron had mentioned his assistant on and off, but never at length. It was nice to finally meet the guy, but something about the man… She couldn’t take her eyes off him.

“I hope you’re not too angry Aaron wasn’t able to pick you up,” Liam said.

She stared out the passenger side window. “Would it surprise you if I said I was mad at first?”

In the window’s reflection she noticed him glancing at her. He wore his dark brown hair in a scruffy, almost un-kept style which suited him. He had a strong face. Not exceedingly handsome, but interesting. But what she’d been immediately aware of the moment he stopped her at the airport was his build. He was tall. Boy, was he tall. His shoulders had to be at least half his height in width. She also bet that underneath his long-sleeved blue dress shirt, he had to be rocking a six pack. He looked like he played extreme sports on the weekends.

She turned to him. He had an accent she couldn’t place. When he pronounced her name, it sounded…different. She’d never had anyone say it that way. She liked the way it tripped off his tongue. In fact, she’d liked him from the moment he shook her hand. He exuded a warmth and confidence she rarely encountered in another person, especially one she’d just met.