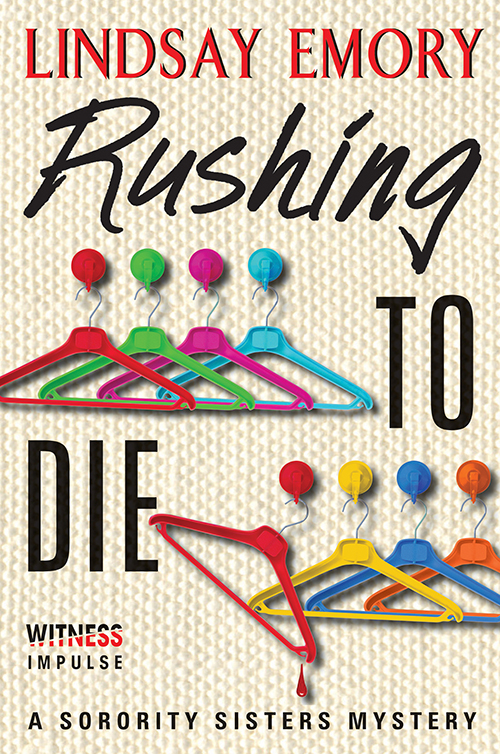 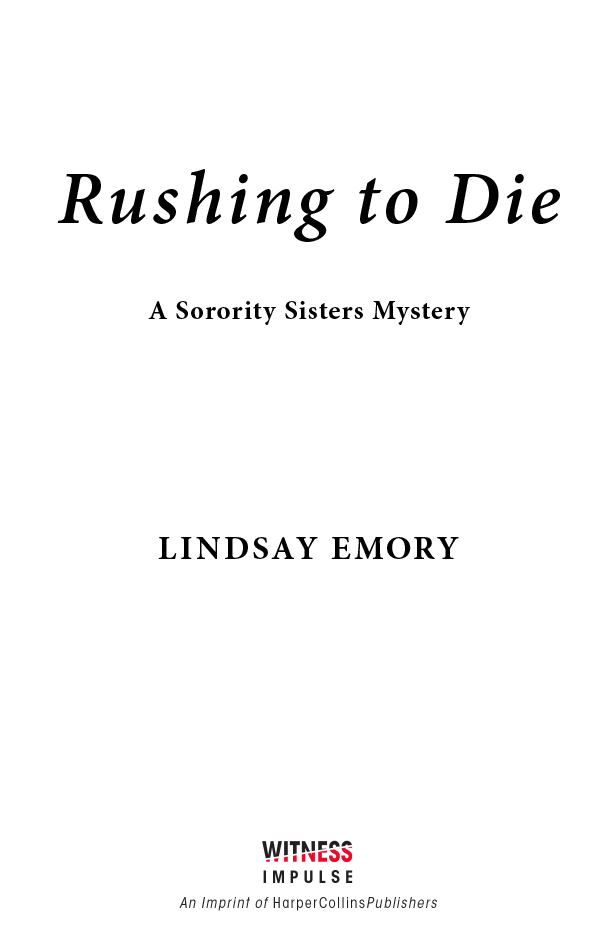 This book is dedicated to Sonic Route 44's,

I couldn't have survived rush without you.

T
HIS BOOK COULD
not have been written without the support of my agent, Cassie Hanjian, and my editor, Trish Daly. Much appreciation to Sara Schwager for her infinite patience and attention to detail that I do not possess, to Emily Homonoff, Angela Craft, and the rest of the HarperÂ­Collins team. Your enthusiasm for books and for Margot are truly a rush for this author (see what I did there?).

As always, a big cookie to my Ladies who Lunch, Alexandra Haughton and Ophelia London, without whom this book would have been ten thousand words shorter because I was tired and wanted to stop, and they scowled at me so I had to finish the last bit.

A million kisses to my family, my husband, and children, who love me when I'm writing and a little less when I'm editing.

Thanks to everyone who welcomed Margot Blythe and the Delta Betas into their hearts.

All rush-Â­related events, pranks, and shenanigans described in this book have been fictionalized. And the statute of limitations has run out as well.

S
ORORITY WOMEN ARE
exceptional in many respects. Our average GPA is generally higher than that of non-Â­Greek women. We are leaders on campus and, quite frankly, the world (just ask Madeleine Albright, Hillary Clinton, and Shonda Rhimes)
1
. We're trendsetters in fashion and social events, and we have unbelievable motor skills.

Exhibit A: the bounce and snap.

A classic staple of rush, this move consists of an entire chapter's bouncing and snapping in perfect synchronization, inspiring all who see it to be better Â­people. Sorority women invented this choreography, along with the Ponytail ShakeÂ©, the Clapân-Â­SlideÂ©, and the Weeble Wobble (Patent Pending).

All week long, the Sutton College chapter of Delta Beta had been practicing the bounce and snap along with their rendition of “Doncha Woncha Delta Beta,” the stirring anthem that Delta Beta sorority rushees everywhere would have rattling in their pretty little highlighted heads.

But today, something was off.

Okay. If I were being honest, something had been off for the past week. Even after all the rehearsals, the chapter still wasn't able to snap and bounce to the beat of the ditty (which, let's be real, was off tune). But I hadn't been able to inspire them to achieve bouncing greatness, let alone reliable snapping proficiency, because I was too busy doing what chapter advisors needed to do before sorority rush: i.e., everything.

The chapter had just started the song from the top (for the forty-Â­fifth time), when there was a high-Â­pitched squeal behind me. “Are you kidding me? Really? Are you freaking kidding me?” The squeal was bad enough. Coming out of a megaphone, it made dogs' ears perk up all the way in Charlotte. “You call that a bounce and snap?Â Mary Gerald Callahan would be ashamed of all of you!” The harsh words came from Ginnifer Martinelli, the Delta Beta sisterhood mentor assigned to help the chapter during rush. Bringing up Mary Gerald, the esteemed founder of our sorority, was tough talk, sure to make the ladies stop and think hard about their bouncing technique.

Three months ago, that would have been me, Margot Blythe, screaming through the megaphone. Well, no. I never used a megaphone while training sorority women; it's my opinion that whistles are far more effective at catching young women's attention.

“Margot!” Ginnifer screamed at me, and I could understand perfectly why the chapter was calling her “the Gineral” behind her back. Of course, I didn't think that was appropriate. “The Martinet” was my nickname of choice for her.

But in front of the chapter, the sisterhood mentor and the chapter advisor had to keep a united front, and Delta Beta headquarters had assured me that Ginnifer had the most impressive record at helping struggling chapters succeed at rush. As a collegian, she had served as rush chair three years in a row at the University of Alabama, and by all accounts had brought in the highest-Â­ranked pledge classes each yearâÂ­documented on several fraternity message boards, with pictures featuring a lot of swimwear.

While I was appreciative of the fact that Ginnifer took the job seriously, organizing rush was nothing compared to what I had to go through when I had returned to Sutton College as a sisterhood mentor. On my first night, the chapter advisor died right before our eyes, and this house was changed forever. We had done everything in our power to distance ourselves from that horrible memory. We had a chapter retreat, completely reworked our Web site, and had a lot of late-Â­night bonding sessions over
Supernatural
marathons. But some things were harder to get over than others.

Not that the Sutton College Delta Beta chapter was struggling. Of course not. The Delta Beta national president had appointed me chapter advisor pro tem, and I wasn't going to let my sisterhood down. The fall GPAs were higher than they'd been in years, our table manners were unparalleled, and our local philanthropy was positively swamped in more hand-Â­knotted fleece blankets than rescue cats could ever use.

I had devoted myself to ensuring that Sutton College Delta Betas were the smartest, classiest, cutest, best women on campus, all with an eye to one thingâÂ­RUSH. Delta Beta was always at the top of the Panhellenic pile, but this year we couldn't leave anything to chance. Not since the murders.

“Do it again!” The GineralâÂ­I mean GinniferâÂ­yelled through her megaphone. “And this time, act like you know what you're doing!”

The sorority women filed out of the chapter room, their heads hanging low. There was some muttering, maybe a wet cheek or two, but I couldn't show mercy, not now. Rush started in three days; this was not the time to give someone a hug or an encouraging smile. This was life or death. Metaphorically speaking, of course.

We'd had enough of death here at Sutton College ever since two Delta Beta sisters had been murdered three months ago. But some Â­people couldn't let it go. Like the press. Even though my best friend and public-Â­relations genius Casey Kenner had tried to put a lid on the story, it had spread like an outbreak of mono after spring break. Then Nick Holden, the supertan former network morning-Â­show host, used the story to get ratings for his struggling cable-Â­news program.

The special report, titled
THE REAL SCREA
M QUEENS OF SUTTON C
OLLEGE
had brought not only the continued attention of the press on us, but parents and administrators breathing down our necks to make sure the sorority environment was healthy, and their daughters were safe. Now the Delta Beta national president, Mabel Donahue, had even whispered that Nick Holden might have another special in the works.

Basically, this rush had to be perfect. We had to overcome our recent history and show the world that bids to Delta Beta didn't come on a toe tag.

“Can you believe them?” Ginnifer had sidled up next to me in the back of the chapter room. “They act like they haven't been practicing this since third grade.”

“It'll come together.” I tried to sound positive, but the Gineral had a point, as much as I hated to admit it. The chapter's snapping left a lot to be desired.

Ginnifer's mouth settled into a determined little line. “It will, or they'll deserve what's coming to them.”

“That sounds a little harsh.” I laughed a little even as my stomach felt like it was going to expel the contents of my three-Â­shot three-Â­Equal latte that I'd had for lunch. And the one I'd had for breakfast. And the two I'd had at last night's dinner.

She made a tsking sound. “You've grown soft since you've settled down here, Margot. You know as well as I do what this rush means. It's a brutal world out there. If the Sutton Debs can't make quota, they're as good as gone.”

Maybe I had gotten closer to this group of women than any of the hundreds of other groups I'd worked with in six years of serving as a Delta Beta sisterhood mentor (longer than any other sister had ever served, I'd point out to Ms. Martinet if it didn't sound a little braggy.) But I could still be tough as nails and whip this chapter into prime snapping and perky bouncing and pitch-Â­tastic singing shape.

“Gimme that,” I muttered, as I yanked the megaphone out of the Gineral's hand. I'd show her the Generalissimo of Rush.

We heard the pitch pipe at the front door, and the chapter immediately launched into a three-Â­part a cappella harmony. “We the girls of Delta Beta.”

Then a nearly perfect cutoff. I couldn't see it from the chapter room, but I imagined the music chair's hand slicing through her throat before holding up one, two, three fingers and cueing the chapter toâÂ­

I lifted an eyebrow at Ginnifer. Their stomps had gotten as fierce as the finals of Ru Paul's Drag Race.

A loud cry rose from the front door, the women half singing, half cheering at the top of their lungs. It was enough to convince any right-Â­minded college-Â­aged woman to sign up for an unbreakable bond of lifelong sisterhood.

“THE GIRLS OF DELTA BEE.”

“WHO ARE THE GIRLS?” asked one-Â­half of the chapter.

“WE ARE THE GIRLSâÂ­THE GIRLS OF DELTA BEE.”

The sound roared down the hallway toward the chapter room, and, in an instant, I was an undergrad again, exhausted and spent, yelling my last ounce of voice in the general direction of fifty rushees, forcing all my love and devotion into the timeless classic.

The chapter filed in, filling the stage in the chapter room. I held my breath as the crucial part of the song began.

“DONCHA WONCHA BE A DELTA BEE, TOO?”

I watched the ladies carefully, willing them to be the best, the most perfect, the women that Mary Gerald Callahan and Leticia Baumgardner would be proud of, and I was happy .Â .Â . then.

My face fell. My stomach churned. A group of three sophomores had dropped their snaps. Yes, their faces were red from screaming their little Deb hearts out. Yes, their bounces were sufficiently springy.

We had no room for error. Not this rush. I picked up the megaphone. “Christopher! Berger! Prejean!”

Their faces paled. They knew they were in trouble when I used their surnames. “TAKE A LAP AROUND THE HOUSE AND THINK ABOUT WHAT YOU'RE DOING HERE.”

I ignored the shame on their sweet red faces as they hurried outside. I handed the megaphone back to Ginnifer and ignored the conflicting emotions rising inside me. The panic was real. So was the compassion.

My mind was in a better place as I retired to the chapter advisor's office to review, for the hundredth time, the Panhellenic rush manual. Everything was fine, I told myself. Even if we were a little tough on each other, a good rush would make everything better. No. It would make everything perfect.

I was in that happy place for about five minutes before three panicked sophomores rushed through my office door.

It was Berger who spoke first, flying through her words so fast, I couldn't process them for a moment. But then, they became horribly clear.

Then everything fell apart. Again.

Angel Be Good by Kathy Carmichael
Guarding His Obsession by Riley, Alexa
Speak to the Devil by Duncan, Dave
The Best of Everything by Rona Jaffe
Heartless by Janet Taylor-Perry
The Revolution by S.L. Scott
Cross Draw by J. R. Roberts
Latter Rain by Vanessa Miller
Earth 2788 by Janet Edwards
The Seventh Immortal (Hearts of Amaranth #1) by J.M. Parry
Our partner