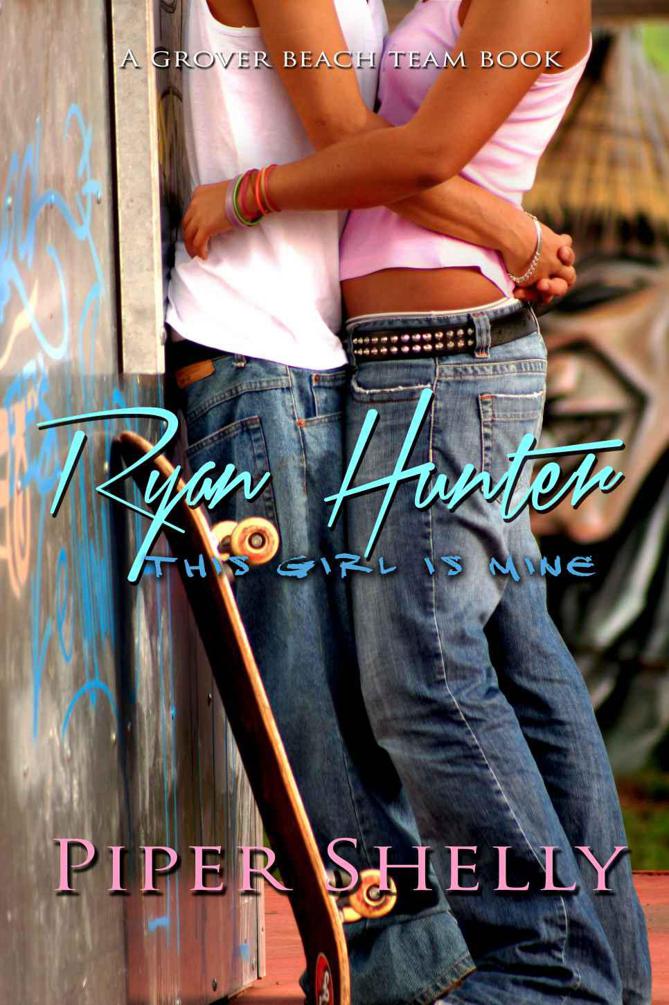 This book is a work of fiction. Names, places, characters and incidents are either the product of the author’s imagination or are used fictitiously. Any resemblance to actual people, living or dead, businesses, organizations, events or locales is entirely coincidental.

All rights reserved under the International and Pan-American Copyright Conventions. No part of this book may be reproduced or transmitted in any form or by any means, electronic or mechanical, including photocopying, recording, or by any information storage and retrieval system, without permission in writing from the author.

This girl is mine

I’D HAD MY fair share of girls in high school, that wasn’t a secret. But I had never really been in love. Well, not with one of the ones I’d had, anyway.

And still, there was
her
. She climbed out of Mitchell’s car, tossed her long brown hair over her shoulder, and adjusted the pink tee that was a snug fit and accentuated all the good stuff. The bright morning sun blinded her, and she squeezed her eyes to thin slits, which made the corners of her sweet mouth move up into something similar to her beautiful smile. And as always when my gaze got stuck on Liza Matthews, I felt something slithery in my chest move into place.

She didn’t look my way.
Never had. And why would she? Her universe was rotating around my soccer buddy, Tony Mitchell. As long as I had known Tony, he’d always come in a double pack. He and Liza were what some people at school called M&M. I hated that term. Hated how she stood on her tiptoes now and slung her arms round his neck. Hated how—

Dammit! Was she going to
kiss
him? My stomach hardened in a way that made me want to claw those damn muscles apart. But damn, I was a man. I wouldn’t give away how tense I was. Or so I thought as I stood stiff as an ironing board and failed to tear my gaze away from the two of them.

They had never kissed. She was in love with him, and I would bet my
Need for Speed
collection that he loved her back in a very odd, very secret way. But they
Had. Never. Kissed.
And that was good, because if they had, I might have gone over there now and rearranged my soccer buddy’s face so that not even his family would recognize him afterward.

I turned to Justin, who’d sneaked up on me and slapped my shoulder, and I let out the familiar breath that I held every time Liza got too close to Mitchell.

“Yeah, it better be. I’d hate to
go murder
on a good friend today.” I grinned at Justin and did the ghetto handshake we’d been doing since we were out of primary school and became the cool kids who roamed the corridors of Grover Beach High.

Justin Andrews wasn’t a member of the Bay Sharks, the school’s soccer team, which I happened to be the captain of. He’d never cared for soccer but was actually a pro on his BMX bike. What he could do was amazing, but only for people who had a serious death wish. Jumping from bridges with his bike or balancing on picket fences earned him bruised bones and awesome black eyes nearly every weekend. Today he’d come to see his little brother off, who was only one year younger than us and actually played soccer on my team.

Justin jerked his chin to my left. “Are you going over there to say goodbye to the girl?”

“Why would I do that? We didn’t even make it to the
Hello
yet.”

“Dude, if they haven’t become a couple in ten years, they probably never will be. It’s about time to let her know about the other fish in the sea that’s trying to get a bite of her.” He scratched his chin. “If you won’t do it, maybe I will. After all, you and that Mitchell guy are gone at soccer camp for five weeks.”

I slung a chummy arm around his neck, pressing a little harder than necessary. In fact, if I’d been any less gentle, the boy would have been blue in the face in a minute. “You can try, dude. But you know that not even the FBI would find your body then.”

He punched me in the ribs so I let him go. But we were laughing so hard that some of the guys and their parents turned their heads our way. We didn’t give a damn about them but bickered some more, until I heard a familiar voice shout my name.

My sister came over and caught me in a hug that was impossible to evade. “I have to go. Phil’s waiting. Be careful, baby brother.”

“Yeah, sure.”
I tried to fend her off when she kissed my cheek. This was okay at home or anywhere people didn’t know me. But in front of my soccer buddies this was just unacceptable. “Go away, Rach. And take care of Mom and Dad while I’m gone.”

“I’m pretty sure they’re old enough to take care of themselves, but I’ll drop by for dinner sometimes if they feel alone or miss their pretty baby.” She laughed and ruffled my hair. Then she headed back to the parking lot near the train station.

Some of the kids had already boarded the train and were waving goodbye from the open windows. As I picked up my duffle bag and walked toward my coach, I caught a glimpse of the last thing I wanted to see this morning. Mitchell and Liza in a pose that pressed her perfect body flush to his. He leaned down those few inches that he was taller than her and whispered something into her ear that made her blush an adorable pink.

“Man, you’re pitiful.” Justin shoved me forward, and only then did I realize that I had actually stopped walking.

Gnashing my teeth and keeping my eyes glued to the much safer ground in front of me, I moved past Mitchell and the girl I’d been dreaming off since third grade.

I knew I should just keep walking. I’d see Tony in a minute on the train, anyway. But the weaker part of me looked up just as Tony let go of my girl. “Hi, Mitchell,” I said back as my gaze went out of control and swept over Liza, taking in every inch of the suntanned skin that her illegally short pants exposed. I acknowledged her and smiled. “And Mitchell’s groupie.”

She didn’t say
good morning
, or
how are you doing
, or even
get lost and don’t ever talk to me again
, though the latter might have been written in her green eyes that seemed to always turn that demonic shade darker whenever she looked at me. I knew she wasn’t my greatest fan. Not because she personally hated me, but because she blamed me for taking away her precious time with Tony. Mitchell had let that bit of information slip one day after she had all but growled at me for doubling the training time.

“See you, Mitchell,” I said and walked away.

“Save me a seat in your compartment,” Tony shouted after me.

I waved at him over my shoulder but didn’t look back.
“Sure thing.” If it wasn’t me and Justin doing something stupid, it was always me and the team guys hanging out. We were really close. Like
closer than family
close. And yet, none of them knew of my obsession with a girl that only had eyes for my best player. Yeah, sometimes you just had to accept the crap life threw at you and put a shit-eating grin on your face.

I climbed the two steps into the coach before turning around to bump fists with Justin. “Enjoy the sun in Santa Monica,” he said. “I hear the girls down there are hot!”

“I’ll check them out and let you know.” Maybe. If I could get Liza off my mind long enough to relax with another girl, something I hadn’t done in quite a few months. If this madness was going to hang on any longer, my reputation would be in serious trouble soon. But I had the weird feeling that it was only going to get worse for me.

Justin pointed a finger at my face. “And you take care of Nick. If he comes back with one scratch on his skin, I’ll hold you personally responsible.”

“Yeah, right.” I flipped him off, because we both knew that his little brother was…well, a little accident prone. Whatever happened during the next five weeks while we were at the annual summer soccer camp, that kid would come back with a limb in a cast, no matter what. The question was just which limb it was going to be. Some of the guys on the team had a bet running. I had twenty on any finger of his left hand, but Justin didn’t have to know that.

I found Frederickson and Alex Winter in a four-seat compartment in the middle of the train. We waited until Tony joined us, then closed the opaque sliding doors, and settled in for the three-hour train ride. We had chips, we had Root beer, and it was just us guys. I decided that the next five weeks were going to be one helluva good time for all of us. But then I
sneaked a glance out the window and caught Liza still standing at the platform, her arms folded around her middle, her face sad.

If that look had been because of me and not my buddy, I would have felt a damn lot better.

The first three days at camp were hell. We played a serious schedule every day, and by the time we were let off, our legs were on fire. By then we weren’t up to anything other than grabbing some food and dropping into the pillow. But we got used to the drill fast, and on day four, Mitchell, Winter, Frederickson, and I thought it was okay to stretch the camp rules a little and sneak out after dark for some fun.

Santa Monica had a few very cool places for students to hang out. No alcohol in the place called
The Teen Spirit
, which was fine with all of us, but awesome music and some eye candy, too. It didn’t take long for a bunch of girls to close in on our table like we were the light to their moth lives. Two of them each sported something black that could barely be called a dress, and the other three were plastered into skintight jeans and tops that left the navel exposed to our view.

“Hi, guys,” one of them said
, batting her lashes at me. I guessed that she was barely seventeen, still a year younger than me. “We usually know all the good looking boys who come here. You must be here for a visit?”

A Visit to Priapus and Other Stories by Glenway Wescott
Finding My Way by Keith, Megan
The Strangling on the Stage by Simon Brett
Coven of Mercy by Deborah Cooke
The Unkillables by Boyett, J.
The Complete Short Fiction of Charles L. Grant, Volume IV: The Black Carousel by Charles L. Grant
Rapture of the Deep: Being an Account of the Further Adventures of Jacky Faber, Soldier, Sailor, Mermaid, Spy by L. A. Meyer
FrostLine by Justin Scott
Danger in a Red Dress by Christina Dodd
Unspoken Words (Unspoken #1) by H. P. Davenport
Our partner