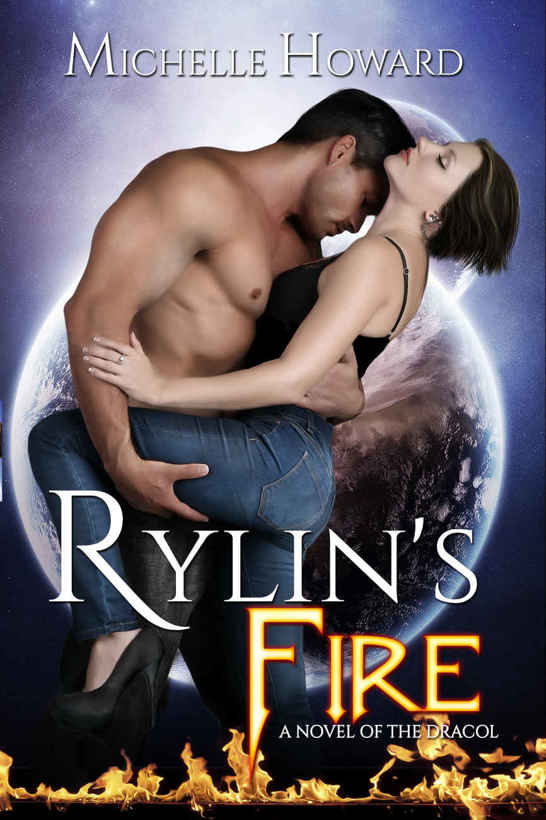 This eBook is licensed for your personal enjoyment only. The eBook may not be re-sold or given away to other people. If you would like to share this novel with another person, please purchase an additional copy for each recipient. If you're reading this eBook and did not purchase it, or it was not purchased for your use only, then please buy an additional copy for each recipient.

No part of this book may be distributed in any format, in whole or in part without the express written consent of the author.

Thank you for respecting the author's hard work.

This is a work of fiction and is not a reflection or representation of any person living or dead. Any similarity is of pure coincidence.

Rylin thought he’d lost everything when his mate left him to bond with another. Then in a surprising twist of fate he inherited the mantle of leadership. Now Rylin rules the Black Dracol but it’s a lonely life. With hopes of finding another mate, he attends a mating party and finds the fates aren’t done with him yet. An Earth woman captures his heart with one flash of her endearing smile and the open ability to laugh at herself.

This was my happiest and saddest book to write. Happy because I’ve been bouncing in my seat at writing a dragon shifter romance all year. But it also made me so very sad because I wrote it during a difficult time in my life. Maybe the most difficult time any little girl could ever go through.

Love you, daddy. I finished another book ((smile))

Rylin strode down the long hall of the royal palace, the sound of his boots ringing against the stone floor. Mounted portraits of past Kings held prominence along the walls, revitalizing him despite the reason for his presence today.  Spine straight, Rylin continued. Rows of men, fellow warriors, marched with him until they reached the throne room. The tone and atmosphere shifted as soon as they all crossed the threshold.

Grief hung in the air, increasing as more entered the room behind him. With a heavy heart, Rylin mirrored the males around him and removed his shirt to bare his torso. He wadded the material into a ball on the floor and dropped to one knee before the massive chair on the dais. Their King sat upright, hands gripping the rounded ends of the arms.

Lines of strain and weariness marked a face once filled with happiness and grace.  Grooves marred the sleek waves of amber streaked, brown hair. A body made fit by war dwarfed the elaborate chair with its carved scrollwork and heavy jeweled embellishments. Gold, glittering eyes surveyed the people amassed in the throne room, pausing when they reached Ry. The King nodded his head in recognition then shifted to eye the others entering.

Soon the hall overflowed with males and females, though most of the women crowded to the far right of the room. Ry remained poised on his bent knee as he searched the crowd, scanning for a familiar face. He froze when his gaze landed on Mikal, one of his best friends and fellow soldier. For years, they served together under the King’s army. Beside him, Mikal’s
lira
, Sana, cradled their new baby but months old.

Sana smiled at Mikal and leaned up to kiss her blond mate’s cheek. Ry flinched, unable to look away from the couple. Sana had once smiled at him in that special way, lips curled, eyes shining as if her world centered on him.

Of course, that all changed when he failed to create a child with her. Month after month, Sana’s ire increased until she requested their mate bond be severed. It had hurt Rylin’s pride for his
lira
to announce her decision to leave him. He might have forgiven her if she hadn’t deliberately chased another, a fellow warrior Rylin called friend, and rubbed Ry’s face in their successful mating.

Since she’d bonded with Mikal, Rylin went out of his way to avoid her, though it proved difficult when she insisted on attending warrior affairs and gatherings where she knew he’d be present. Fortunately, his friendship with Mikal endured aside from the initial discomfort.

Sana turned in his direction and their eyes met across the expanse. His heart seized and air trapped in his throat. Gold eyes, like most of their people had, stared and narrowed. Then, proving her heart to be as cold as their mating bed had become, Sana turned away and cooed to her baby.

Bitter pain sliced through Rylin’s heart for the child he’d once longed for. Mikal kissed the top of Ani’s red hair—a match to her mother’s, tickled the baby’s fat cheeks, and joined the others by going to one knee and removing his shirt. They exchanged glances and Mikal nodded.

Rylin heaved a sigh, shoving regret far away, and faced forward. The large chambered doors clattered closed behind them. King Sarkin stayed quiet a moment, allowing the silence to gain steam. Time slowed as the tense pall spread, and then he spoke.

“We know why I have gathered those of the Black.” His voice resonated with ancient power.

One of the females against the wall cried out. Her blonde hair lay in loose coils about her shoulders. As always, her dress and manner proclaimed her royalty despite her pale features and tearstained eyes.

King Sarkin smiled at his
lira
gently. “My time has come and I’m not afraid of the great beyond. Save your tears, my heart.”

Rylin braced his hands on the floor as his shoulders grew taut. He wasn’t surprised. King Sarkin had marked his two hundredth year among them this year. A king did not summon all of the males in his caste with such short notice unless the end was near.

“The essence of my Dracol,” King Sarkin continued, once again facing the men gathered, “will choose a worthy male to carry on the Black mantle. I only request that he who rises in my stead take care of my
lira
in my absence.”

“Will my last order as your King be heeded?” King Sarkin asked.

The room rumbled with the shouted reply as it echoed through out. “Yes, Sire!”

Though Rylin called out his response as loud as the others, one look at the Queen and he wasn’t sure she wouldn’t choose the path of others before her. When the king died, the queen more often than not chose to follow.

King Sarkin sighed and leaned forward, elbows braced on his knees, palms clasped together. His voice when he spoke next was lower, rougher. “Let us not linger. I’m weary.”

Every man in the room kept their gaze forward. Many hoped, prayed to be selected to wear the weight of the mantle and assume the crown. Rylin had no such desires or cares. He was content with his lot in life, but his essence swelled in preparation. Centuries’ old instinct could not be denied and his nature fought for dominance.

“I summon the mantle.” The room vibrated with energy as the King called forth the root of the Black Dracol power.

Lightning cracked overhead and flashes of light filled the room. Rylin found himself grinding his teeth as wave after wave of power cascaded over him and the floor trembled beneath him. Others hunched over, and loud groans followed.

“Bring forth the new King and a new reign!” King Sarkin roared, rising to his feet, arms extended over his head.

Even more power gathered and coalesced. Someone screamed to the left of Ry and fell to the side. The males around him began to collapse under the strain of the mantle seeking another.

Ry curled his fingers into balled fists, knuckles turning white as he pressed them into the tiles until the pain distracted him from the pounding his body took. Thunder boomed above and the walls heaved.

Panting from the overload, Ry dropped his head in time to witness the floor buckle. With every muscle straining, he forced his head back up.

King Sarkin shouted, his back arched. “Is there none worthy, oh mighty one?”

Mikal grunted and fell to his stomach, limbs splayed. Rylin recognized Sana’s scream of denial. “No! Get up!”

Arms trembling, Rylin checked on his friend, relieved to see his chest rising. The relief was short lived. Rylin reared back on his haunches as a fist slammed into his mid-section. Pain exploded in his head and radiated throughout his entire body. His teeth grinded and uncontrollable grunts broke out as he sustained blow after blow.

A bolt of lightning burst from the King’s chest and struck Rylin dead center. Rylin’s last clear image showed King Sarkin slumping to the floor then hundreds of voices slammed into his head and fire lit a path down his spine. He screamed at the sensation of burning skin being peeled from his back.

Rylin’s perception dimmed as phantom claws ripped him open from the base of his neck down the length of his spine to the top of his hip. His essence rose at last to meet the burden and wrapped around him to buffer the effect. He fell forward on his hands and knees, shaking. The voices faded until one word repeated itself clearly.

Rylin’s awareness came back in small increments. Females cried, males moaned, and he couldn’t stop his own choked gasps as he continued to twitch with residual spasms. When he lifted his head, one of the King’s men grasped him about the shoulder and helped him to his feet.

“What happened?” Rylin mumbled, trying to restore his balance. Everything around him wavered, his vision going in and out of focus.

“Come with me,” Nolan instructed.

Rylin followed blindly as they headed toward the throne, one stumbling step at a time. At the foot of the gold dais, a pile of black ashes on the floor swirled then flew out the open window. Confused, Rylin blinked as Nolan helped him to sit on a cushioned seat.

“The mantle has chosen,” Nolan announced. “All hail King Rylin of the Black Dracol.”

Owl and the City of Angels by Kristi Charish
Follow the Stars Home by Luanne Rice
Tidal Whispers by Kelly Said, Jocelyn Adams, Claire Gillian, Julie Reece
Crunching Gravel by Robert Louis Peters
Truck Stop by Lachlan Philpott
Earth Zero: A Post-Apocalyptic Thriller (Next Book 2) by Scott Nicholson
This Doesn't Happen in the Movies by Renee Pawlish
Disappearance by Wiley, Ryan
Small Beneath the Sky by Lorna Crozier
A League of Her Own by Karen Rock
Our partner