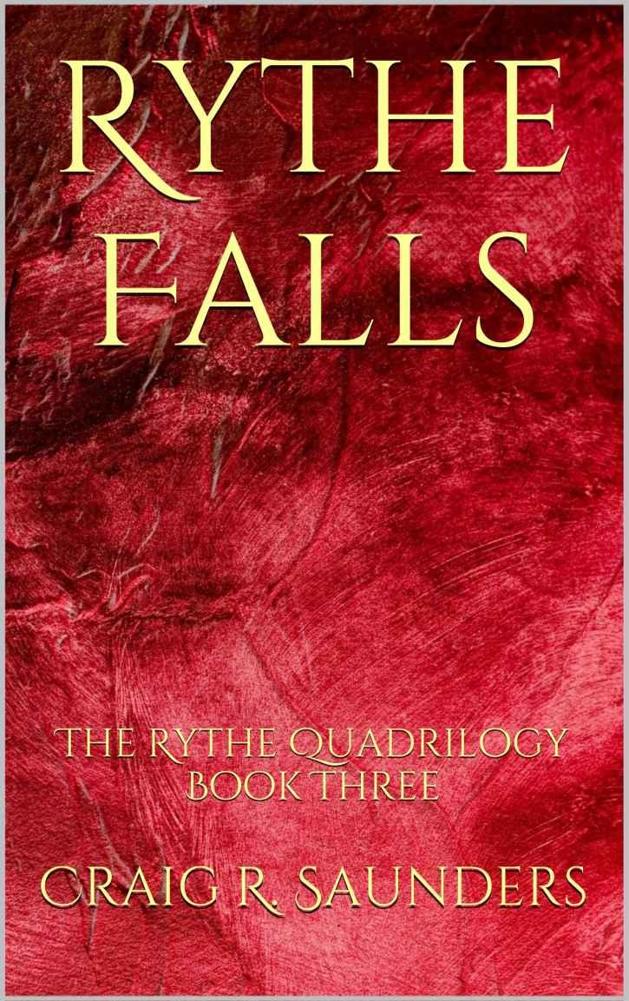 All rights
pertaining to this work belong to Craig Saunders and Craig R. Saunders Publications. Any resemblance to persons living or dead is purely coincidental.

A Home by the Sea

The Noose and Gibbet

The Love of the Dead

Scarecrow – Scarecrow by Craig Saunders and The Madness by Robert Essig

The Walls of Madness

Dead in the Trunk

The Black and White Box

The Outlaw King (The Line of Kings Trilogy Book One)

The Thief King (The Line of Kings Trilogy Book Two)

The Queen of Thieves (The Line of Kings Trilogy Book Three)

Masters of Blood and Bone

The world of Rythe is rather vast, as are the stories set therein. Unwieldy, even for me, and I write it. With that in mind, I thought I'd take a moment to present to you, the reader, a short recap, in the form of a foreword and a few thoughts from me. Hopefully this will help set things in your mind as we embark upon this, the third instalment (yes, yes, overdue!) in the Rythe saga.

In
Rythe Awakes
, the first book of the quadrilogy, we are introduced to Renir Esyn, a rather ordinary man with a harridan of a wife. Renir finds himself drawn into the battle for the fate of the world of Rythe, and at the behest of the powerful wizard Drun Sard, he saves the life of Shorn, a mercenary warrior with a dark past.

Across this vast world, a woman (a politician, I suppose) called as Tirielle A'm Dralorn, is in a protracted battle of wills against an organisation known as the Protectorate. The Protectorate, inhuman overlords to the human denizens of her land (Lianthre), have a dark design for the future - they are working to bring about a fate that would mean the extinction of human life on Rythe - the return of the Sun Destroyers.

Only one, however, can truly defeat the Protectorate - a relic of an age past, a man they know only as 'The Red Wizard'.

That is, by and large, the crux of
Rythe Awakes
. For those familiar with superhero tales, with fantasy and its somewhat flexible conventions...it is an origins story. It concerns the growth of Renir Esyn, a man of lacklustre ambitions, to a man to walk the mountains with (thanks, David Gemmell, for that phrase).

During their adventures and their trials, Tirielle, Roth and the Sard discover a young girl with tremendous power, a seer. They save her, and eventually fight their way through a portal to a frozen wasteland known as Teryithyr, where the Red Wizard (named Caeus) is said to reside.

Renir and his friends, too, find passage to the snow-bound wastes aboard a ship belonging to the Feewar, a seafaring people cursed to never know the feel of land beneath their feet.

And in the finale, they find Caeus. He is their only hope in the battle against the Protectorate and, at a remove, the Sun Destroyers.

Caeus, they discover, is a being more terrible than anything on Rythe. The Red Wizard is the last of the Sun Destroyers remaining on Rythe.

And so, that takes us rather neatly to this, the third instalment of the Rythe saga...or does it?

Please, allow me a moment for a small digression. There is no need to read this, but if you want a hint or two...read on.

Caeus himself isn't, as some readers know by now, first introduced in
Tides of Rythe
. Caeus is older than these books - he is first introduced in The Outlaw King - book one of The Line of Kings Trilogy. As I said at the beginning of this little preamble, the world of Rythe is vast, as is the history of the world and its peoples.

I try to add an enlightening short tale to each novel, too. The Martyr's Tale, The House of Broken Dreams, The Witch's Cauldron, The Unknown Warrior...there are more - you may or may not have read them, but they all concern the wider world of Rythe.

The Line of Kings Trilogy and The Rythe Saga are intertwined. They are part of a large body of work that has taken, to date, ten years or more.  All books concern the Sun Destroyers, Caeus, and the Line of Kings. I'm not sure any reader is ever as invested in a world as the author, but this body of work is...kind of like knitting a jumper.

In The Outlaw King, a seer named Jenin tries to discern all the threads of fate, and ultimately the fate of the Line of Kings. He could not.

But then he wasn't very good at knitting.

This book is, by and large, for me. But I do not write in a vacuum, and this book came about through the love of this series from fans.

So I'd like to dedicate this story to Jami Hamilton and John C. Hoddy, for their fervent and belligerent belief that I not only should finish this series, but could.

I write alone, but it is the belief of fans and friends and family that keep me going.

The darkness of the void spreads between worlds and moons and stars. Not a true void, but close enough to the purest blackness that man could ever know. Light was there, yes, but distant. Like the black was a room, and the light was nothing more substantial than cobwebs high up in the corners.

There was motion in the dark reaches of space, but on a scale of movement so slow that to a human it seemed eternal and utterly still.

The sun and stars, the constellations, the world, all were turning. The moons Hren and Gern spun, too, about Rythe. The sight of the moons alone was more than a man could bear.

Carious, the largest of the twin suns; unimaginable.

Even in the vast distances of space, the giant sun left the man who saw these sights breathless. But then, of course he was breathless. For here, looking out at the never-ending stars and down upon his world, there was no air.

It should, perhaps, have been cold, or hot, or he should feel something...but Renir Esyn was not uncomfortable. At least not physically. He was aware of no sensation in his battered body. He had no wounds, nor bruising. A man should hurt, after fighting a creature such as the Revenant, a beast that he'd thought beyond imagining...a man should know some kind of suffering, surely, after fighting his way through countless battles, across a continent, through snow higher than a man. And what strange creatures he had seen...the revenant itself, and the hath'ku'atch, and even the white beasts of the frozen wastes. Such sights...

Surely a man should break from wonder, if not pain?

But Renir could not move, weep, yell. His breath stuck in his chest, his heart unbroken and unbreakable. Suspended in a single moment in time, perhaps, where there was nothing but thought and the sight of the suns, the world, the moons, the stars like markers against the dark that went on forever into the yawing black void of time and space and...

Llike drowning in black oil with your eyes open.

Renir recognised that thought as his own.

He forced himself to think. He might not be able to close his eyes, but he could still think, could he not?

Renir remembered some of what passed before, though not all. But he did remember the thing they'd found within the beast at the heart of the volcano.

A man should be able to weep, surely, after finding the Red Wizard? A man should
hurt,
shouldn't he?

But he was barely aware of his body at all. He felt no hunger, no need to breathe. Still he found that his heart was not stopped, because his heart urged him to cry.

Should he even be able, here in this black vastness above the world, would his tears sit still on his face, unable to move from this...spell?

Is this magic, or am I dead?

He could not help but wonder.

There are times in most men's lives that they wonder if they died. In war, to feel a mace on a helm and wake, head pounding and confused. For a moment, might not that man wonder if he crossed through Madal's Gate into the unknown? Might he not wonder if death itself was no more than a gateway to more pain?

Sometimes, happiness, sadness, confusion...many things can make a man wonder if he died without even realising.

Renir Esyn was not a complicated man, but he imagined Madal's Gates to be imposing, impressive...perhaps even difficult for a man to pass through. A man like him? With blood on his hands? Might be such a feat as passing the Gates would be impossible.

Renir wondered these things while he hung, suspended, in the enormous blackness between the worlds.

How long have I been here, floating in black air?

Carious, gold, Dow, the red of sweet-maple in the autumn, their colour and beauty unhindered by the clouds and shimmering air of his native Sturma.

I should burn to nothing before such glory,
he thought.
I should fry and smoke and char like a man on fire. My bones should roast, surely? My eyes should go blind...

But he did not look away.

Soon, he could see nothing but the sun, do nothing but float, and dream. Like a dead man, suspended in a single, endless moment of pure glory.

All the while, a silent shadow waited behind him. A harbinger or a herald, none but the creature who made all this possible could ever know. In the darkness behind the King the Red Wizard stood, just as he had for two thousand years.