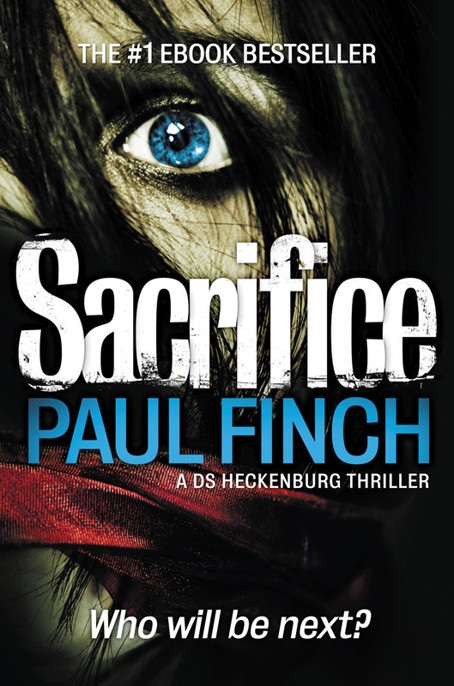 For my lovely wife, Catherine, whose selfless and unswerving support has been the bedrock on which I’ve built my career

Hooked on Heck? Read on for a sneak peek of Hunted, where Heck takes on his biggest challenge yet …

The whole of Holbeck should be bombed.

That was Alan Ernshaw’s view. Okay, he was a relatively new police officer – just ten months in the job – so if anyone overheard him make such a politically incorrect statement and complained, he’d have an excuse. But the gaffers still wouldn’t be impressed. Holbeck, the old warehouse district located just south of Leeds city centre, might well consist mainly of buildings that were now empty shells, its Victorian terraced housing might now mostly be derelict, the few parts of it that were inhabited reduced to grotty concrete cul-de-sacs strewn with litter and covered in graffiti, but policemen didn’t take these sorts of things personally anymore. Or at least, they weren’t supposed to.

Ernshaw yawned and scratched the dried razor-cut on his otherwise smoothly shaven jaw.

‘Well we’re not sitting down for a turkey dinner, put it that way.’

‘
Join the club. Listen, if you’ve nothing else on, can you get over to Kemp’s Mill on Franklyn Road?
’

Ernshaw, who was from Harrogate, some fifteen miles to the north, and still didn’t completely know his way around West Yorkshire’s sprawling capital city, glanced to his right, where PC Keith Rodwell slouched behind the steering wheel.

‘Yeah, three minutes, over,’ Ernshaw said into his radio.

‘
It’s a bit of an odd one actually. Anonymous phone call says we’ll find something interesting there
.’

‘
Like I say, it’s an odd one. Came from a call-box in the city centre. No names, no further details
.’

‘Sounds like a ball-acher, but hey, we’ve nothing else to do this Christmas morning.’

It wasn’t just Christmas morning; it was a snowy Christmas morning. Even Holbeck looked picture-postcard perfect as they cruised along its narrow, silent streets. The rotted facades and rusted hulks of abandoned vehicles lay half-buried under deep, creamy pillows. Spears of ice hung glinting over gaping windows and bashed-in doors. The fresh layer muffling the roads and pavements was pristine, only occasionally marked by the grooves of tyres. There was almost no traffic and even fewer pedestrians, but it wasn’t nine o’clock yet, and at that time on December 25 only fools like Ernshaw and Rodwell were likely to be up and about.

Or so they’d assumed.

‘Something interesting …’ Ernshaw mused. ‘What do you think?’

Rodwell shrugged. He spoke in monosyllables at the best of times, and as he was now deep in thought there wasn’t much chance even of that.

‘Bunch of druggies or something?’ Ernshaw added. ‘Squatting? If that’s it they’ll all be dead by now. Must’ve been minus-ten last night, easily.’

Kemp’s was a former flax-spinning mill, but it had been closed now for nearly two decades and was a forlorn reminder of prosperous times past. Its tall octagonal chimney was still intact, the square windows arrayed in uniform rows across its dingy frontage were largely unbroken, and most of its ground-floor entrances were supposedly chained shut, but, like so many of the derelict buildings around here, it wouldn’t be difficult for determined intruders to force entry.

Snow crunched under their tyres as they slid to a halt on the mill’s southward-facing lot. The gaunt structure loomed over them against the white winter sky. The red bricks with which it had been constructed were hidden beneath soot so thick it had become scabrous. Those pipes and gutterings that hadn’t already collapsed sagged beneath alpine overhangs of snow. At first glance there was no sign of life, but the place was enormous; not just a central block, which itself might have housed a thousand workers, but also all kinds of annexes and outbuildings. As the van eased forward at a snail’s pace, it dawned on Ernshaw how long it might take them to locate ‘something interesting’ here.

‘We’re at Franklyn Road now. Everything looks okay so far. Any further on the complainant, over?’

‘
That’s negative, Alan. Could be some prat with nothing better to do, but probably best to check it out, over
.’

‘Received,’ he said, adding under his breath: ‘Might take a while, mind.’

They drove in a wide circle around the aged edifice, their tyres sliding as they hit patches of sheet-ice. Ernshaw wound his window down. It was bitterly cold outside – the snow was still dry and crisp as powder – but even if they didn’t see anything untoward, it was possible they might
hear
it.

That they didn’t was vaguely disconcerting.

Christmas morning ought to be deeply quiet, restful, hushed by the freshly fallen snow, yet the silence around Kemp’s Mill was somehow uncanny; it had a brittle edge, as if it could shatter at any moment.

They rounded corner after corner, gazing up sheer faces of windows and bricks, networks of ancient piping, and hanging, rusted fire-escapes. The van’s wheels constantly skidded, dirty slush flying out behind. They trundled through an access-passage connecting with a row of empty garages, the corrugated plastic roof of which had fallen through after years of decay. On the other side of this they spotted an entrance.

Rodwell applied the brakes gently, but the van still skated several yards before coming to rest.

What looked like a service doorway was set into a recess at the top of three wide steps. There was no sign of the door itself – possibly it lay under the snow, but from the state of the doorjamb, which had perished to soggy splinters, this entry had been forced a long time ago. A pitch-black interior lay beyond it.

‘Yeah, we’re still at Kemp’s Mill. Evidence of a break, over.’

‘That’s negative at present. Looks like an old one.’

They climbed out, gloving up and zipping their padded anoraks. Ernshaw adjusted his hat while Rodwell locked the vehicle. They ventured up the steps, the blackness inside retreating under the intense beams of their torches. At the top, Ernshaw thought he heard something – laughter maybe, but it was very distant and very brief. He glanced at Rodwell, whose dour, pitted face registered that he’d heard nothing. Ernshaw was so unsure himself that he declined to mention it. He glanced behind them. This particular section of the property was enclosed by a high wall. The van was parked close alongside it, the entrance to the garage-passage just at its rear. Aside from the tracks the vehicle itself had made on entering the yard, the snowfall lay unbroken. Of course, flakes had been falling heavily until about two hours ago, so this didn’t necessarily mean that no one had been here during the night.

They entered side-by-side, torchlight spearing ahead, and were immediately faced by three options: directly in front, a switchback stair ascended into opaque blackness; on the right, a passage led off down a long gallery zebra-striped by smudges of light intruding through the ground level windows; on the left lay a wide open area, presumably one of the old workshops. They ventured this way first, their torch-beams crisscrossing, revealing bare brick walls and a high plaster ceiling, much of which had rotted, exposing bone-like girders. Shredded cables hung like jungle creeper. The asphalt floor was scattered with planks and fragments of tiles. Here and there, the corroded stubs of machine fittings jutted dangerously upward. Despite the intense cold, there was a sour taint to the air, like mildew. The scuffling of their feet echoed through the vast building’s distant reaches.

They halted to listen, hearing nothing.

‘This is a wild goose chase,’ Ernshaw finally said, his words smoking. ‘You realise that, don’t you?’

‘Probably,’ Rodwell replied, shining his torch into every corner. From the moment they’d received the call, Rodwell had seemed a little graver of purpose than usual, which was intriguing to Ernshaw. Keith Rodwell had been a copper for so long that he generally sized situations up instinctually. The way he was behaving now suggested that he genuinely believed something untoward was going on here.

‘Keep it down. Even if this is someone taking the piss, let’s catch ’em at it.’

‘Keith … it’s Christmas morning. Why would someone …’

But Ernshaw had also just heard the long, low creak from overhead. They regarded each other in the gloom, ears pricked.

‘Take the front stair,’ Rodwell said quietly, edging across the workshop. ‘I’ll go around the back … see if I can find another way up.’

Ernshaw retreated to the door they’d come in through. He glanced at the van out in the yard; as before, there was no sign of movement. He started to ascend, attempting to do it stealthily though his footsteps rang up the stairwell ahead of him. The first floor he came to comprised another huge workshop. Not all the windows up here were boarded, though their glass was so grimy that only a paltry winter light filtered through. Even so, it was enough to hint at an immense hangar-like space ranging far across the building, filled with stacked crates and workbenches, forested by steel pillars.

Ernshaw hesitated, gripping the hilt of his baton. This time last year he’d been an innocent young student at the University of Hull, so he had no trouble admitting to himself that, while it was bad enough being made to work on Christmas Day – only the older, married guys tended to be spared that pain-in-the-arse duty – it was even worse having to spend it trawling through the guts of an eerie, frozen ruin like this.

A loud crackle from his radio made him jump.

The voice of Comms boomed out as it dispatched messages to patrols elsewhere on the subdivision. Irritated, he turned the volume down.

Ernshaw advanced as his eyes adjusted to the half-light. Directly ahead, about forty yards away, a doorway opened into what looked like an antechamber. For some reason, the rear brick wall of that chamber was lit by a greenish glow.

The Mind Connection: How the Thoughts You Choose Affect Your Mood, Behavior, and Decisions by Joyce Meyer
Wind Over Marshdale by Tracy Krauss
SWAINS LOCK (The River Trilogy, book 1) by Edward A. Stabler
XSLT 2.0 and XPath 2.0 Programmer's Reference, 4th Edition by Michael Kay
The Death of William Posters by Alan Sillitoe
Queen Sugar: A Novel by Baszile, Natalie
Hell's Gift by Haigwood, K. S.
The Kingdom of Light by Giulio Leoni
Operation by Tony Ruggiero
The Forgotten Pearl by Belinda Murrell
Our partner