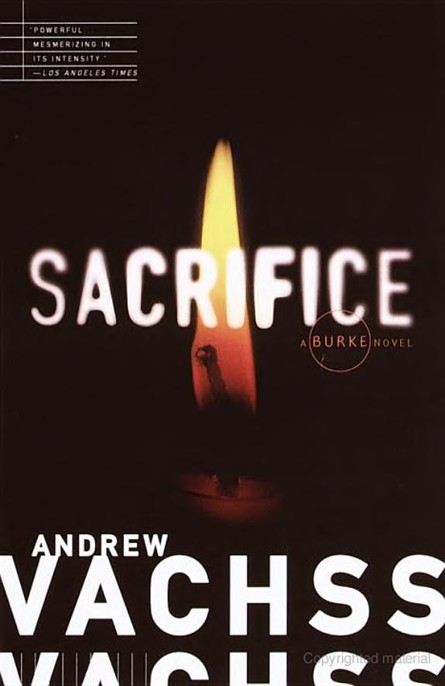 a warrior who fought blindness

until the last battle closed her eyes

if love would die along with death,

this life wouldn't be so hard

"Burke is back, tougher than ever….Gritty….hard-edged."

"Vachss's characters are carefully sketched, the dialogue is sharp, and the driven Burke is a creature you can't spend enough time with. Many writers try to cover the same ground as Vachss. A handful are good. None are better."

"As savage as Celine…As pure as Euclid."

"Burke is an unlikely combination of Sherlock Holmes, Robin Hood, and Rambo, operating outside the law as he rights wrongs…Vachss has obviously seen just how unable the law is to protect children. And so, while Burke may be a vigilante, Vachss's stories don't feature pointless bloodshed. Instead, they burn with righteous rage and transfer of degree of that rage to the reader."

"Andrew Vachss, a New York lawyer who specialized in the problems of child abuse, writes a hynotically violent prose made up of equal part of broken concrete blocks and razor wire."

"Strong, gritty, gut-bucket stuff, so unsparing and vivid that it makes you wince. Vachss knows the turf and writes with a sneering bravado….Burke prowls the city with a seething angry, almost psychotic voice appropriate to the devils he deals with ….Vachss is good, his Burke novels first-rate."

W
hen you hunt predators, the best camouflage is weakness.

The E train screeched into Forty–second Street. I got to my feet, pulling slightly on the leather handle of the dog's harness. She nosed her way forward, wary. Citizens parted to let me pass. A black teenager wearing an oversized blue jacket with gold raglan sleeves braced one side of the doors with his arm, making sure they wouldn't close as I passed between them. "You okay, man. Step through."

My dark glasses had polarized lenses. The kid's face was gentle. Sad. Someone in his family was blind. I mumbled thanks, stepped off the subway car onto the platform.

I pushed forward on the harness handle, like shifting into gear. The dog headed for the stairs, waited for a clear path, then took me up along the rail.

On the sidewalk, I turned my face toward the sun, feeling the warmth. "Good girl, Sheba," I told the dog. She didn't react, a professional doing her work. I shifted the handle and she went forward, keeping me in the middle of the sidewalk. Away from doors that might open suddenly, maintaining a safe distance from the curb. I closed my eyes, counting steps.

Sheba halted me at the corner of Forty–fourth and Eighth. She didn't watch the traffic signals any more than the other pedestrians did. It's the same rule for everyone here—cross at your own risk.

I made my way carefully along the sidewalk, counting steps, guided by the dog. Found my spot. Tugged slightly backward on the handle—Sheba sat down. I unwrapped the blanket from around my shoulders, knelt, and spread it on the ground. When I stood up, Sheba lay down on the blanket, made herself comfortable. I opened my coat. Inside was a cardboard sign, held around my neck with a loop of string. White cardboard, hand–lettered in black Magic Marker.

I held a metal cup in my hands. Added a few random coins to sweeten the pot.

H
umans passed around me, a stream breaking over a rock. They didn't look at my face. If they had, they would have seen a couple of rough patches where the blind man had missed with the electric razor. I was wearing high–top running shoes, loosely laced, denim pants, a gray sweatshirt. All under a khaki raincoat that came past my knees. A well–used black fedora on my head.

The local skells were used to me by now. I made it to the same spot every day. Patiently collected coins from passing citizens, face held straight ahead.

I was a piece of scenery, as anonymous as a taxicab.

My eyes swept the street behind the dark lenses.

Sheba settled into her task. An old wolf–shepherd, mostly gray, soft eyes watchful under white eyebrows. She had a warrior's heart and an undertaker's patience.

Hooker's heels sounded on the sidewalk. A bottle blonde, wearing a cheap red dress, short–tight, black fishnet stockings, a hole the size of a half–dollar on the front of one thigh, pale skin poking through the mesh, low–rent makeup smeared her face. Getting ready to work the lunchtime crowd.

I drew a sharp breath through my nose, inhaling her cheap perfume as greedily as a cokehead. She laughed, bitter and brittle. "Yeah, I guess maybe you can. I seen you before. Standing here."

"I know. I seen you smoke sometimes…when someone lights one for you. You want one now?"

"I have some…" Fumbling in her red vinyl shoulder bag. "You want one now?"

She stuck two cigarettes in her mouth, fired them with a cheap butane lighter. Handed one to me.

"It tastes good," I told her, grateful tone in my voice.

"The lipstick…that's what tastes good."

She flushed under the heavy makeup. "I didn't mean…"

"It's okay. Everybody's missing something." Her eyes flashed sad. "I had a dog once. Back home."

"I can't. Not now. You don't understand…Home's far away from here. A million miles away."

"These are bad streets, Debbie. Even if you can't go home, you can go away."

I dragged on my cigarette.

"You know what I'm talking about?" she asked, her voice bitter–quiet.

"No, you don't. He's watching me. Right now. Across the street. I spend much more time out here talking to you, not making any money, I'm gonna get it from him."

Even with my eyes closed, even with her facing me, I could see the coat–hanger marks across her back. Feel them. I shifted my face slightly, let her hear the core to my voice. "Tell him you made a date with me. For later."

"Put your hand in my coat pocket. Your left hand."

"Wow! You got some roll in there."

"It's mostly singles, two twenties on the inside. Take one…Tell him you asked for half up front."

She glanced over her shoulder, hip–shot, leaned close to me. "I tell him that and he'll be waiting for you later…when you go home."

"I know. Tell him the roll was a couple a hundred, it's okay."

"Just do it, Debbie. You live with him?"

"You can go home tonight. Away from here."

"Take the money, go do your work. Tell him what I told you."

"Reach in, pull out the roll. Shield it with your body. Take the bill, put the rest back. Pat my dog. Then take off. Tonight, you go home, you understand? Stay out of the bus station—take a train. It'll be okay, Debbie."

She reached in my pocket, knelt down.

The dog made a sweet little noise as Debbie patted her. She straightened up, looked into the lenses of my glasses. "You're sure?"

I listened to her heels tap off on the sidewalk. A different rhythm now.