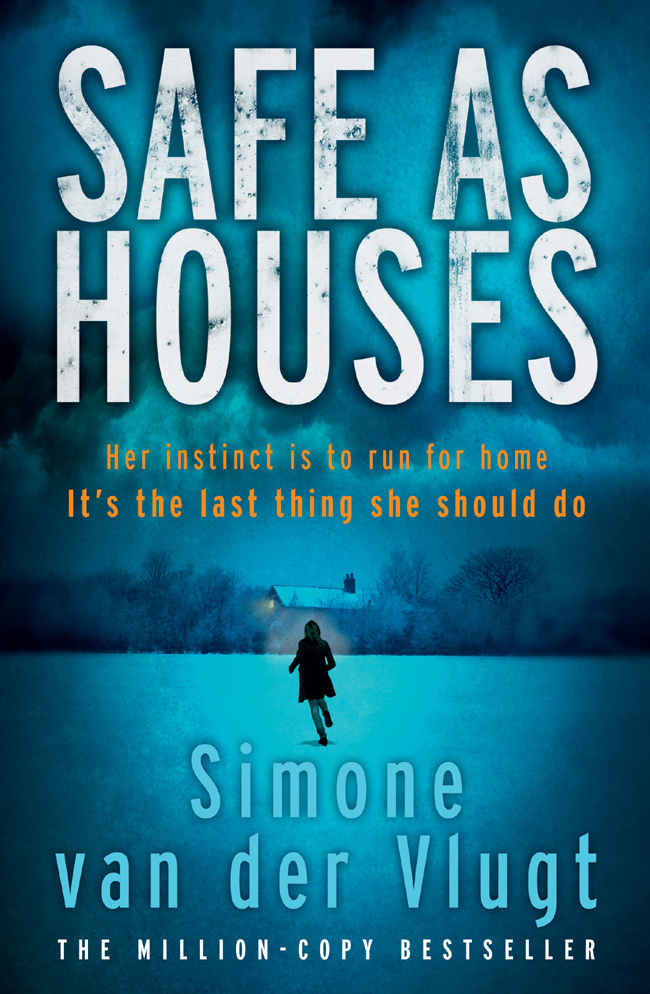 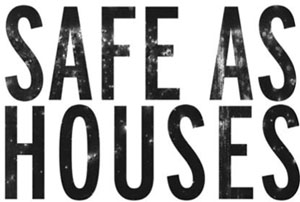 Translated from the Dutch by

Published in Great Britain in 2013 by Canongate Books Ltd, 14 High

This digital edition first published in 2013 by Canongate Books

The moral rights of the author and translator have been asserted

Originally published in 2012 in Dutch as
Blauw water
by Anthos,

A catalogue record for this book is available on

request from the British Library

She doesn't see the man until right at the last moment. Lisa is in the garden, hanging the washing on the rotary washing line, when all of a sudden he appears from behind the flapping sheets. She drops the sheet in her hands on to the grass with a yelp. The man looks so terrifying that she recoils, bumping into the table behind her. The washing basket tumbles to the ground, followed by the pegs.

The man studies her with squinted eyes. He looks quite scruffy, with crew-cut black hair and at least two days' worth of stubble. He is wearing worn-out cowboy boots, and his clothes are covered in grass stains, but it is mainly the icy look in his eyes that frightens Lisa.

A gust of wind makes the washing line spin, and the flapping laundry hides the man from view for
a few seconds. Lisa seizes her chance and runs towards the kitchen door. The man steps around the washing line, beating aside the sheets that blow at him, and follows her. Just before she reaches the house, he breaks into a sprint. Lisa slams the door in his face, but before she can throw the bolt the man pushes it open and forces himself inside. His presence fills the entire kitchen.

Lisa's eyes race over to the knives hanging on the tiled wall above the worktop, but she knows she'd never be quick enough to reach them. She inches cautiously backwards towards the open door of the sitting room. The shrill sounds of the television programme her five-year-old daughter, Anouk, is watching on the sofa emerge from inside the room.

Lisa waits, motionless. The intruder does too, and they stare at each other for a length of time. Just as long as Anouk doesn't notice, just as long as she stays put, absorbed in her cartoon.

The man doesn't look particularly muscular, but he is very tall and Lisa knows that he could have her on the ground, no problem. She isn't going to fool herself into thinking that she could hold him off, though she can prevent him from catching sight of her daughter.

It occurs to her that he hasn't yet said a single word. She can't fathom him out â she has no idea
who she's dealing with or what he wants from her.

As the man advances towards her, she retreats and holds on to the doorpost, but he heads towards the worktop. The remains of their lunch are there: the breadboard, half a loaf of brown bread, a packet of crackers and some chocolate sprinkles. Anouk's half-finished glass of milk is in the sink. She didn't want more than that today, and Lisa didn't want to force her. She probably would have spat it out again anyway.

The man grabs the glass and finishes the milk. Then he swipes the bread bag, ignores the knot Lisa has made in it and tears open the plastic. The slices come tumbling out, and the man stuffs one into his mouth without even considering the fillings on the worktop. He keeps one eye on Lisa as he eats.

She watches the scene in astonishment. The man is starving! Seeing him eat ravenously, she is in two minds. If she'd been alone, she could have run away by now. But she won't get far with Anouk. The best she can do is to try to make it clear to him that she's not his enemy, that she wants to help him.

She opens the fridge with trembling hands and reaches inside. As she does so, his large hand grabs
her arm and his aggressive face looms very close, but when he sees that Lisa is holding a box of eggs he relaxes.

The anxious, submissive tone she hears in her own voice doesn't please her, but the man lets go of her arm.

Her legs feel as though they're about to disappear from under her, but she makes it to the worktop and opens a cupboard. As calmly as she can and without any sudden movements, she gets out a frying pan and sets to work.

Too close, he's standing too close to her. Lisa's hands clutch at the packet of butter. She'll have to slice off a pat, but she'd rather not draw his attention to a knife.

The butter is cold and hard, and she has to fiddle at it to remove the paper and squeeze off a chunk. She throws it into the frying pan and wipes her fingers on her jeans.

The butter hisses in the pan. Soon the eggs follow; she has broken them so clumsily she has to fish out pieces of eggshell. She is far too extravagant with the salt and pepper. It annoys her that she has lost control of her hands. At the same time she needs to keep herself busy and maintain the appearance of being calm.

She moves slowly and deliberately to the fridge, and this time he leaves her alone. Cheese and ham land haphazardly on top of the eggs, whose yolks are slowly congealing. The gas can be turned down now, and with a metal skimmer she lifts up the fried eggs from time to time. It feels good to be holding something she can use as a weapon, ill suited or not.

The man stares at the eggs. He inhales the cooking smell and then roughly pushes Lisa aside, grabbing the pan from the heat and dumping the ham and eggs on to the breadboard. He picks up the eggs and spreads them over two slices of bread, then he eats the meal standing.

Lisa watches him with her back pressed against the tiled wall. Hell, the man can eat. If he takes any bigger bites, he'll choke.

But the man manages to swallow every mouthful. When he's done, he lunges towards Lisa. She lets out a strangled cry, but he is only opening the fridge door to take out a carton of milk. He puts the opening to his mouth and swills down its contents, trickling milk over his unshaven chin and his clothes.

Lisa is suddenly breathless from the shock of it all. She leans back against the wall. What now? Will she be able to walk away and phone someone, or leave the house with Anouk? No, she has to
avoid anything that might make him aggressive. Her house is just too far off the main road to take a risk. She would have attempted it on her own, but not with a sick child.

Her only chance is to make a call. Her mobile is on the dresser. All she has to do is to dial 112 for the emergency services.

Slowly she peels her back from the wall, but the man stations himself in front of her in an instant.

The command sounds very calm, which makes it all the more threatening. Lisa doesn't move.

The man throws the empty milk carton on to the worktop and looks through the open door into the sitting room. Anouk looks back at him from the sofa with frightened eyes. She is not keen on strangers. She is even shy with people she knows, if she hasn't seen them for a while. There have been times when she has stood in the hall for hours, not daring to enter the fray of a birthday party. Only when nobody is looking does Anouk creep in, and then her nervousness slowly but surely wears off.

Now she sits there in her purple Dora the Explorer pyjamas, staring at the strange man in the doorway. She gives her mother a panicky glance and her lip begins to wobble.

Lisa swiftly pushes herself past the man and places her body as a buffer between the uninvited guest and her daughter. If he wants to do anything to Anouk, he'll have to get past her first. It wouldn't be that difficult for him, but every second that she can keep him in the kitchen counts.

âWho is that?' the child asks fearfully.

âThis man was very hungry. I made him something to eat.'

âBut who is he?' Anouk repeats with the stubborn determination of a five-year-old.

The answer sticks in Lisa's throat. The man pushes her aside and lets his eyes travel around the open-plan dining-and-sitting room. It seems as though he is not sure what to do next.

Then his eyes rest on Lisa again and a look of calculation appears on his face.

âIn there,' he says abruptly.

Deep in her heart she had hoped he would leave once his belly was full. Instead he is roaming around her house, picking up photos, opening drawers and looking in cupboards. She'll leave him to it: he can take everything in it, just so long as he leaves them alone.

âYou have a lovely house.'

âThanks.' It sounds stupid, as if he's an acquaintance paying a duty call rather than an intruder, but it's the only thing she can think of. Don't provoke him, whatever you do, don't provoke him. Wait calmly to see what his next move will be, and in the meantime keep standing between him and Anouk.

Thank God Anouk is sitting quietly on the sofa, her toy monkey clutched to her, as if she senses that it's best to remain as inconspicuous as possible.

âNice stuff you have too.' His hand glides over an antique sideboard; he taps his nail on the edge of a crystal wine glass. Lisa shuffles backwards towards the kitchen and gestures discreetly to Anouk, but before she can slip off the sofa the man enters the sitting-room area.

He walks around the coffee table, his eyes fixed on the large colourful painting above the sofa. It's a piece Mark painted the year they first met, and it means more to Lisa than she can say.

âArt,' the man says, as though he were pointing out a flying saucer.

The Robber Bridegroom by Welty,Eudora.
Breakfast with Neruda by Laura Moe
Shooter (Burnout) by West, Dahlia
A Rumor of Bones: A Lindsay Chamberlain Mystery by Beverly Connor
The Oxford Book of American Det by Utente
The Cornerstone by Kate Canterbary
Escape to Witch Mountain by Alexander Key
Breakthroughs by Harry Turtledove
A Crush on Her Best Friend's Brother: Complete Box Set by Sharon Cummin
The Redhunter by William F. Buckley
Our partner