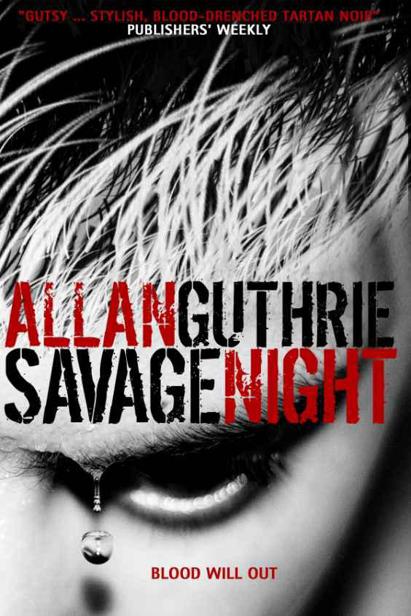 All rights reserved. No part of this publication may be reproduced or transmitted in any form or by any means without permission of the author.

Allan Guthrie has asserted his right under the Copyright, Designs and Patents Act 1988 to be identified as the author of this work.

All the characters in this book are fictitious and any resemblance to actual persons, living or dead, is purely coincidental.

Also by Allan Guthrie on Kindle

WHEN HE OPENED his sitting room door, the last thing Fraser Savage expected to see was a corpse stuffed inside a stainless steel bathtub on a plastic sheet in the middle of the floor. The body was naked and clearly male, even though it was face down.

"What in the name of fuck is that?" Effie said.

Fraser shook his head slowly. The corpse had pale skin. Hairy buttocks. It was plump round the middle.

Fraser's toes and fingers started to prickle and his stomach cramped. The two pints he'd had earlier in the evening suddenly seemed like a lot more. And those three—or was it four?—lines of coke hadn't helped. Sweat rolled down his back. His nose was running too. He dabbed at his nostrils with the back of his hand.

"I think it might be Uncle Phil," he said.

He shivered. Not that he was cold. Felt like he'd puked his guts out and there was nothing left. Another shiver rippled through him.

Was it his uncle? Same waxy pale skin that ginger people have, same overall body shape.

But he'd never seen Uncle Phil naked. He might have identified him by his hair, that permanent ginger bed-head, but that wasn't an option. Maybe the corpse had ginger pubes. Although even that didn't mean it was Uncle Phil. There were plenty of other poor bastards with ginger pubes. Maybe the skin was excessively pale because of the blood loss and he wasn't ginger at all.

Fraser could turn him over, find out.

Yeah, right. He wasn't wrestling with that.

Somebody had cut the poor bastard's head off and it was nowhere to be seen.

He took the glass of vodka from Effie, the liquid sloshing around as his hand shook. Steadied it with his other hand and knocked it back. It burned his throat nicely. He gave her back the glass and she poured him another. He took it, drank it. Felt warmer now, less shivery, hands not so shaky.

Effie didn't appear fazed by the situation at all. Almost as if she was used to stumbling over corpses in her boyfriends' homes.

Not that he was her boyfriend, exactly. But they'd been getting along well and maybe something would have happened tonight. It certainly wouldn't now. A headless corpse was a major turn-off.

Fraser couldn't help but think of the way Effie had introduced herself when they first met. Wearing a two-tone orange blouse, checked headscarf, sandals, almost a hippy thing going on. Said the cold didn't bother her, although her nipples suggested otherwise.

That was less than a week ago.

"Effie," Fraser had said, shaking her hand, feeling her cool palm in his. "Nice name. And what do you do?"

Her grin brought out the wrinkles round her eyes. She was maybe five years older than him and he liked that. "I kill people," she said.

Fraser grabbed her hand tighter, laughing. "Like a mercenary or something?"

Effie squeezed his fingers hard, then slid hers out of his grip.

You just had to take one look at her to know she didn't have what it took to be a paid killer. She was no more than an inch over five foot.

But, Fraser wondered now, staring at the tub in his sitting room, what if it
was
true?

Starting to suspect Effie was just plain crazy. She'd been at the pub with him, so she couldn't have done it. Even if she was some kind of psychokiller. What the hell was he thinking? He should be asking himself smarter questions.

Like, where was
the head? And why would anybody want to run away with it? Jesus, maybe it was lying around somewhere. Under one of the chairs, or beneath a cushion or behind the curtain. Christ's sake.

He was glad Simone wasn't here. She'd probably order him to get down on his hands and knees and start hunting for it.

She was as bad as Simone.

Fraser found himself stepping towards the tub. Swaying as he walked, as if he was drunk. Shock. Had to be. Cause he hadn't had much. Just those pints and the neat vodkas Effie'd given him.

The plastic sheet scraped underfoot. He bent over the body, peered down at the neck. Ragged skin and gristle. He looked away. Straight at the inch or so of dark liquid clotting in the bottom of the tub. A bloodbath—yep, that's exactly
what it was.

And the smell: sharp and raw. His stomach muscles tightened, cheeks puffed, but somehow he held his dinner down. Amazing he could smell anything, the way his nose was streaming. He wiped it with the back of his hand, beyond caring what Effie would think.

He stepped back from the tub, shaky, a bit fuzzy headed, but okay. Shit, yeah.

The corpse's legs were bent at the knee, flopped sideways. The soles of the feet were white and tender looking. It felt wrong that they were exposed like this. He shouldn't be staring at them.

Fraser followed her gaze towards the corpse's hand, twisted behind his back. He wasn't sure what she meant.

Of course. If Fraser got a close-up of that ugly monstrosity, he could be sure, right enough. But he couldn't tell with the hand lying palm-up like that.

Effie strode over to the tub, grabbed the hand, turned it over, held it out. She bent the ring finger towards Fraser.

No doubt about it. Uncle Phil's silver Viking longboat ring.

Fraser tried to speak. Nodded instead.

FRASER WATCHED HER step over to the table, pick up the phone, dial. Calm in a crisis. Every bit as capable as Simone.

Anything, as long as this would all go away.

He stuck his hand in his pocket, but took it out again when Effie said, "Police."

He thought she was warning him, but she was speaking into the phone. Made him think, though. Probably not the best time for him to indulge in any dodgy habits. He listened as she explained what had happened. Gave the cops the address.

She'd only been here once before. All over him when they'd arrived—clinging to him as he punched in the alarm code—but she'd grown more distant as the night went on. Not that it went on that long. Called herself a taxi after a couple of drinks. Fraser was probably coming on too strong.

But she wouldn't be here now if there wasn't some hope. Thing was, he fancied the pants off her, but he liked her a lot, too. Anyway, he suspected he was creating a bad impression right now, one that wasn't hugely attractive, forgetting Uncle Phil for a minute. Right now, he'd settle for not throwing up or pissing himself.

He wiped his nose again, breathed deeply through his mouth, and immediately wished he hadn't. He wasn't ready for the taste that clung to his tongue, his lips, his teeth. Like he'd just sucked a penny. He glanced over at Effie, who shrugged, spoke into the phone again.

Fraser felt like crying. Not that he felt sad, exactly. Come to think of it, he could just as easily break into a fit of giggles. Really odd. Like he'd taken a fistful of pills and was buzzing and sloppy drunk at the same time. Could be the coke, but it was a feeling he didn't recognise.

He was glowing under his skin.

What he really wanted was for Effie to hold him, stroke his hair while he fell asleep. That'd be nice.

THE NIGHT HE met Effie, Fraser had been doped to the eyeballs—so much so that all the beer he'd drunk wasn't having any effect—but even straight, Effie would have made him laugh his balls off. She had something about her. An air, a friendly face, a charm, a genuine smile. And that dark humour you either loved or hated.

At first he decided to use Effie to make Simone jealous. Simone was Fraser's on/off girlfriend. She was also Worm's wife. Fraser had never slept with a married woman before, and it was fun, and a little dangerous. Anyway, his plan wasn't working. Simone didn't pay them any attention and before long Fraser was having a good time chatting to Effie and didn't care if Simone noticed.

The Eve Genome by Joanne Brothwell
THE SUBWAY COLLECTION-A Box Set of 8 Dark Stories to Read on the Go by MOSIMAN, BILLIE SUE
Damaged Hearts by Angel Wolfe
Double Digit by Monaghan, Annabel
Blood of Angels by Marie Treanor
The New Guy by Amy Spalding
Indiana Belle (American Journey Book 3) by John A. Heldt
Ahoy for Joy by Keith Reilly
The Child Comes First by Elizabeth Ashtree
Always For You (Books 1-3) by Shorter, L. A.
Our partner