Read Savior in the Saddle Online

Savior in the Saddle 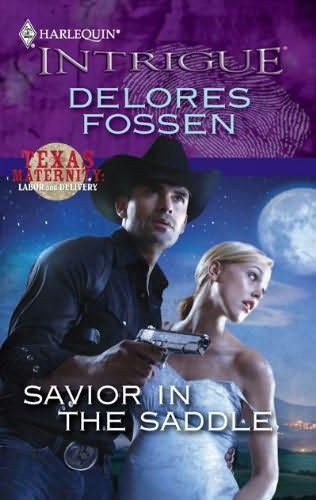 “Just let me go,” she begged Brandon. “If this is really your child as you say, then please help me get away.”

“Swear it,” she said, sounding as desperate as she felt. “Swear on my life that the baby is yours.”

Brandon put his fingers beneath her chin and lifted it to make direct eye contact. “I swear on your life. On mine. On our baby’s life. The child you’re carrying is mine.”

He sounded so sincere. Looked it, too. Still, there was something, something she couldn’t quite put her finger on.

But Willa didn’t get a chance to finish that threat. There was no warning. No time to get down.

A bullet slammed through the bathroom window.

SAVIOR IN THE SADDLE

To my daughter, Beth

Imagine a family tree that includes Texas cowboys, Choctaw and Cherokee Indians, a Louisiana pirate and a Scottish rebel who battled side by side with William Wallace. With ancestors like that, it’s easy to understand why Texas author and former air force captain Delores Fossen feels as if she were genetically predisposed to writing romances. Along the way to fulfilling her DNA destiny, Delores married an air force top gun who just happens to be of Viking descent. With all those romantic bases covered, she doesn’t have to look too far for inspiration.

Sheriff Brandon Ruiz
—This small-town Texas sheriff is stunned to learn that he’s about to become a father.

Willa Marks
—A Texas maternity hostage who’s now on the run. Willa’s short-term-memory loss makes it impossible for her to know whom to trust, including the father of her child.

Sergeant Cash Newsome
—A San Antonio cop and Brandon’s longtime friend, but it’s possible Cash has his own agenda when it comes to finding out what really happened to the maternity hostages on that fateful day.

Martin Shore
—The cold-blooded assassin who’s after Willa, but no one knows who hired him.

Lieutenant Bo Duggan
—Lead investigator for the maternity hostage situation. Bo’s wife died during the hostage situation, and he believes Willa’s broken memories hold the secrets to finding all the people responsible for his wife’s death.

Doctor Lenora Farris
—A psychiatrist who works closely with the police.

Dean Quinlan
—The CSI who resigned shortly after the hostage incident. Was it because he had something to hide?

Wes Dunbar
—Nightclub owner who might have murdered his rival and then tried to cover it up by orchestrating the maternity hostage situation.

They
had found her.

Willa Marks saw the proof of that when the man stepped from the black four-door Ford that had just pulled into her driveway.

He had a badge clipped to his belt.

She pressed her fingers to her mouth to silence the gasp that nearly escaped from her throat and she eased down the blinds that she’d lifted a fraction so she could peek out.

This couldn’t be happening.

Willa hurried away from the window and to the wall next to the door. Her shoulder brushed against the trio of yellow sticky notes that she’d left there, and one of them fluttered to the floor.

She no longer needed the reminder. At least, Willa didn’t think she did. But she’d left it there just in case. It was too important for her to forget something like that again.

“It’ll be okay,” she whispered to her unborn child, hoping she wasn’t lying to the baby and herself.

She slid her hand over her pregnant belly, but she knew her hand wouldn’t be much protection if this turned out to be the start of another round in the nightmare that just would not end.

The doorbell rang, the sound knifing through the room, and this time she wasn’t able to muffle her gasp. Of course, she’d known they would ring the bell. And they wouldn’t stop until she let them inside.

They had found her.

Well, by God, they weren’t taking her back into their so-called protective custody. Look where that had gotten her the last two times.

She and her baby had nearly been killed.

There were ten notes around the house to remind her of that, and just in case that wasn’t enough, the warning scrolled across the screen saver of her laptop: Don’t Trust the Cops.

The doorbell rang again, and it was followed by a heavy knock. “Ms. Marks, I’m Lieutenant Bo Duggan from San Antonio P.D. I know you’re in there.”

Maybe he had seen her car in the garage. Or perhaps he’d even spotted her when she’d made a quick trip just a half hour earlier to the grocery store.

But how exactly had they found her?

She’d been so careful—using an alias, paying only with cash, leaving no paper trail. She hadn’t wanted to dye her hair because of the chemicals, but she hadn’t cut it in months and, with it pulled back from her face, she didn’t resemble the photos that had been snapped of her four months earlier and splattered all over the news.

Apparently all those safety measures hadn’t been enough.

“Lieutenant Bo Duggan,” she repeated under her breath, and Willa hurried to grab her PDA from her desk next to the sofa.

There was another knock, and another, but Willa ignored them and scrolled through the pictures and names she’d assembled in case her memory failed her again. She found him. Bo Duggan’s photo was there, and she’d added a caption: I Think I Can Trust Him.

It was the word
think
that kicked up her heartbeat an extra notch. But then, in the past four months, there was no one that she trusted completely.

“We need to talk to you,” Lieutenant Duggan said from the other side of the door. “We know you’re scared, but there are things we have to ask you—important things.”

Willa carried the PDA back to the window and peeked out again. The lieutenant’s face matched the picture she had, but he wasn’t alone.

There was another man with him.

The second man was tall and lanky. He wore jeans and a crisp, white shirt topped with a buckskin jacket, and he held a saddle-brown Stetson in his left hand. His dress was casual, unlike the lieutenant who had on a dark blue suit.

It was the second man that Willa focused on. Did she know him?

He had thick black hair that was slightly long and rumpled, no doubt from the cold December wind that was assaulting them. With that Stetson, jeans and jacket, he looked like a cowboy from the
Texas Monthly
magazine she had on her coffee table.

His skin was deeply tanned, but she shook her head, rethinking that. The skin tone was probably natural. Those high cheekbones and features were Native American.

She frantically scrolled through the pictures again, but she didn’t expect to find him. With those unique looks, Willa thought he might be someone she would remember without the prompts, pictures and captions.

The knocks got harder, and each blow against the thick wood sent her pulse racing out of control. She couldn’t call the local cops. There were plenty of notes telling her not to trust them. So maybe she could wait out these two. Eventually Lieutenant Duggan and his Native American partner would get tired of knocking and leave.

Then she could gather her things and go on the run again.

The baby inside her kicked hard, as if protesting that. “Well, I’m not too happy about it, either,” Willa mumbled.

She’d lived here at this suburban Austin rental house for two months now, and that was a month longer than the extended-stay hotel where she’d stayed in Houston. Two months hadn’t been long enough for her to settle in or to stop being afraid, but she had started to believe she might be able to remain here until after the baby was born. Or at least until Christmas, which was only three days away.

So much for her short-term dreams.

They were as fleeting as her short-term memory had been just weeks ago.

“Willa?” someone called out.

Not the lieutenant. Another look out the blinds, and she realized it was the other man who’d spoken. The man whose picture wasn’t in her PDA. But he had said her name as if he knew her.

No, it was more than that.

He said her name as if he knew her
intimately.

“Willa, it’s me, Brandon. Look, I know you’re probably still mad at me—I don’t blame you. But I’ve been searching for you all this time so I could tell you how sorry I am about the argument we had.”