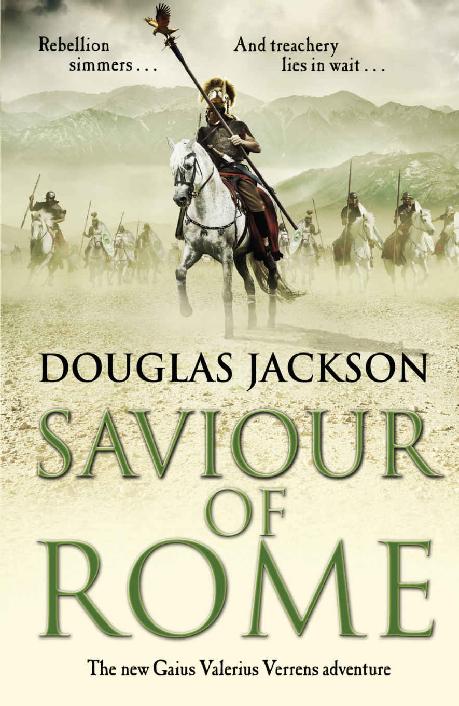 AD 72. Titus Flavius Vespasianus, known as Vespasian, is Emperor of Rome, but his grip on power grows increasingly fragile as economic disaster threatens. The enormous riches from his Judaean campaigns are all but spent, legions go unpaid, and the yields from Rome’s vital Spanish goldfields have fallen dramatically since the civil war.
Gaius Valerius Verrens is recently married and building a new home when the summons arrives from the Emperor. Vespasian needs a man with the combined skills of a lawyer and a soldier to investigate what is happening in remote, mountainous Asturica Augusta where the authorities claim a bandit called The Ghost is ravaging the gold convoys.
But when Valerius arrives in Asturica he faces a much more complex situation. Stalked from the shadows he cannot tell ally from enemy, the exploited native tribes are a growing threat, and the tortured landscape itself seems capable of swallowing him up. Gradually he finds himself drawn into a much wider conspiracy, one that could plunge the Empire into a new conflict and that will place him on a deadly collision course with his old friend and most dangerous adversary, the former gladiator Serpentius.

However, his grip on power is weakening as economic disaster threatens the city and so the Empire itself. The imperial treasure chests are all but empty, legions go unpaid, while yields from the vital gold mines in Spain have fallen dramatically.

Gaius Valerius Verrens, recently married and building a new home, had hoped he’d left his old life behind when he received the summons from the Emperor. Vespasian wants his old friend to do him one last favour: to journey to the remote, mountainous region of Asturica Augusta and investigate claims that a bandit called ‘The Ghost’ is raiding the Empire’s gold convoys with impunity.

What Valerius finds in this tortured, gods-forsaken land is much more complicated. The native tribes, exploited for so long, are a growing threat, but it seems the real danger comes from those closer to him. Treachery waits in the shadows as he is drawn into a conspiracy that, were it to succeed, would plunge the Empire into a devastating new conflict.

It falls to Valerius to put an end to it – but first he must establish who is a friend and who a foe . . .

For my friends Elaine and John, the driving forces behind
The Daily Mile, which is helping transform the
health of Britain’s schoolchildren

Some are of the opinion that he was driven to his rapacious proceedings by the extreme poverty of the treasury and exchequer.

Gaius Suetonius on Vespasian (
Lives of the Twelve Caesars
)

He lay in a shallow depression overlooking the dusty valley. The relentless Iberian sun beat down fit to melt the jagged rocks beneath him and the top of his skull burned like glowing coals despite the cloth scarf covering his face and head. Only the pitiless predator’s eyes remained visible to strike fear in anyone who looked upon them. He’d been stalking the convoy all this long, hot day, but it was only in the last few minutes that he finalized his plan of attack. He went over it once more in his mind before squirming backwards to where the others crouched, invisible behind the brow of the hill.

‘They have to cross the river at the old ford below Vulture Cliff.’ He drew a rough map in the sand with the point of his dagger and the ten men leaned close to catch his whispered words. ‘That’s where you’ll stop them.’

‘How?’ A throaty growl from a heavily bearded man with brick red features and eyes turned to mere slits by years of squinting into the Asturian sun. ‘There are thirty of the hook-noses guarding the wagons.’

The leader produced a grunt of irritation behind the cloth mask. Always it must be Buntalos with the unnecessary question. The
hook-noses were a mixed squadron of Parthian auxiliaries from the wing based at Legio, and Buntalos was right, there were too many of them for a direct attack. One or two of the others darted a nervous glance at their comrade. They’d learned early it was unwise to risk the anger of the man who led them.

‘You do what we discussed last night.’ He let them hear his irritation. ‘Show yourselves among the rocks. Change positions to make them think your numbers are greater. They’ll be keen to reach the fort before nightfall, but the ford is rocky and the escort won’t risk an all-out charge against a well-positioned enemy. If they probe you, show them how good you are with a sling shot. That should hold them for long enough.’

‘And you, Nathair?’ This time it was young Sigilo and the leader allowed himself a hidden smile. It still sounded odd to hear the name in his own tongue rather than Latin.

‘If you hold their attention I will do what must be done.’

His companions nodded solemnly, even Buntalos, who, for all his truculence, was a steady hand with a blade and a deadly slinger. A potter by trade, a bandit when it suited him. Serpentius had saved his life when the village where they’d wintered had turned out to fend off marauding wolves during a blizzard. Buntalos had followed him like a sheepdog ever since. The others were experienced night raiders who’d lifted sheep and goats from the villages in the lower valleys or snatched sacks of grain from a storehouse serving one of the Roman mines. Such raids were a rite of passage among the hill tribes and a link to the old ways. In the years before Serpentius returned to his homeland they’d become ever bolder as Hispania’s garrison troops were sucked into the civil war that had come close to tearing the Empire apart. Thankfully, the days of great retaliatory sweeps by thousands of merciless legionaries were long past, though the district procurator might send out a squadron or two of auxiliaries on a training exercise that doubled as a punitive expedition.

This raid would be different.

Serpentius watched his men trot off down a gully that would lead them to the river crossing. They wore homespun tunics and head cloths that matched the dusty mountain terrain and within moments they’d merged into the landscape. Buntalos and the others knew these hills as well as they knew the rocky fields and scrubby gardens of their home villages. They’d reach their destination well ahead of the heavy wagons and their mixed escort of auxiliary cavalry and infantry. The escort commander might send a small patrol to check the crossing, but Serpentius had faith in his men’s ability to stay out of sight. Any Asturian who retained a semblance of independence had years of experience avoiding patrols sent to comb the mountains for labour to work endless hours in the mines or smelting workshops.

He crawled back to the lip of the bowl and squeezed into a narrow gap between two large boulders. From this vantage point he could watch the road without exposing his silhouette on the skyline. Below, ten covered wagons lumbered into sight, each pulled by a team of four bullocks and guided by a driver walking at the shoulder of the lead beast. Serpentius turned his attention to the mounted escort, a dozen cavalry troopers from the wing at Legio. They rode with shoulders slumped and heads down, evidence of the boredom and frustration at having to match the slow pace of the carts. Ten of the Parthian cavalry rode in front of the wagons, with two acting as a rearguard. He counted another eighteen infantry trudging nine to each side of the line of carts and no doubt sick of eating the dust kicked up by the horses and the iron-shod wagon wheels. They’d be tired after the long march from the Red Hills mines, but they looked alert enough.

He felt an instant, visceral loathing for the men in the pot helmets and chain-mail vests. Hired killers whose first thought was for plunder and rapine, they served Rome in return for a pension and a brass diploma that listed their service. On that final day the diploma would proclaim them a citizen of an Empire that placed a tax on anything born of nature, and much that wasn’t. A soldier would have applauded their dispositions: flexible enough to react to attack from any
quarter, infantry providing close protection and cavalry able to respond quickly to the slightest threat. Serpentius would have preferred something a little more inviting, but given the importance of the cargo the precautions hardly came as a surprise. In fact, security was a little lighter than he’d expected, which raised certain possibilities. He scrutinized the line of wagons again because those possibilities were both positive and negative, but they could only be tested by close inspection.

When the rearguard disappeared from sight he counted to a hundred before slipping over the crest and down the boulder-strewn slope. He moved with animal stealth by long-honed instinct from one piece of cover to the next. In the past he wouldn’t have noticed the exertions of the day, but a pounding head and the dull ache in his lower back were a reminder of the wounds he’d suffered in Rome and Jerusalem. The
medicus
said the injuries would never fully heal, but they’d affected Serpentius more than he’d expected. His feet were less sure than of old and his breathing more ragged, causing an occasional dagger of pain in his chest. Some of the edge that had made him one of the most feared men in Rome was lost for ever. He could only pray that was all he’d lost.

He smiled. Despite the doubts, Serpentius understood the aura of threat he carried with him. Loss, suffering and the scars of war had given him a face that promised pain and death. Fifteen years a slave and a gladiator had honed his wiry frame into a lightning quick, whip thin weapon of muscle and sinew. His speed and endurance, and the skills he’d acquired to keep him alive in the most dangerous place on earth, turned him into a killing machine. He’d lost count of the opponents who’d died beneath his sword. The men he led believed him an invincible combination of the stealthy mountain lynx that threatened their flocks and the savage desert leopard, of which they’d only heard fireside tales. The gladiator tricks he’d taught these slow farm boys and pot makers gave them the swagger of warriors among their tribes and clans. They were proud men, brave and eager for the fight. Yet courage couldn’t hide the reality that in combat with the auxiliaries they’d last only as long as it took their enemy to decide between the throat and the heart.

That vulnerability was the reason he’d ordered them to stay on the far side of the river and avoid contact. Their presence was a ruse designed to provide Serpentius with an opportunity, nothing more. He didn’t want anyone killed, on either side. In truth he’d been reluctant to use them at all. But his friend needed his help and there was no other way.

Mr Mojo by Dylan Jones
Bent Road by Lori Roy
Shadow of Doubt (An SBG Novel Book 2) by P. A. DePaul
The Avatar by Poul Anderson
Hellblazer 2 - Subterranean by John Shirley
The Ghost-Eater and Other Stories by Diane Awerbuck, Louis Greenberg
Capturing the Alpha (Shifters of Nunavut Book 1) by Rivard, Viola
Fearless by O'Guinn, Chris
Army Beasts Resurrection by Dahlia Rose
Worth Dying for (A Dying for a Living Novel Book 5) by Kory M. Shrum
Our partner