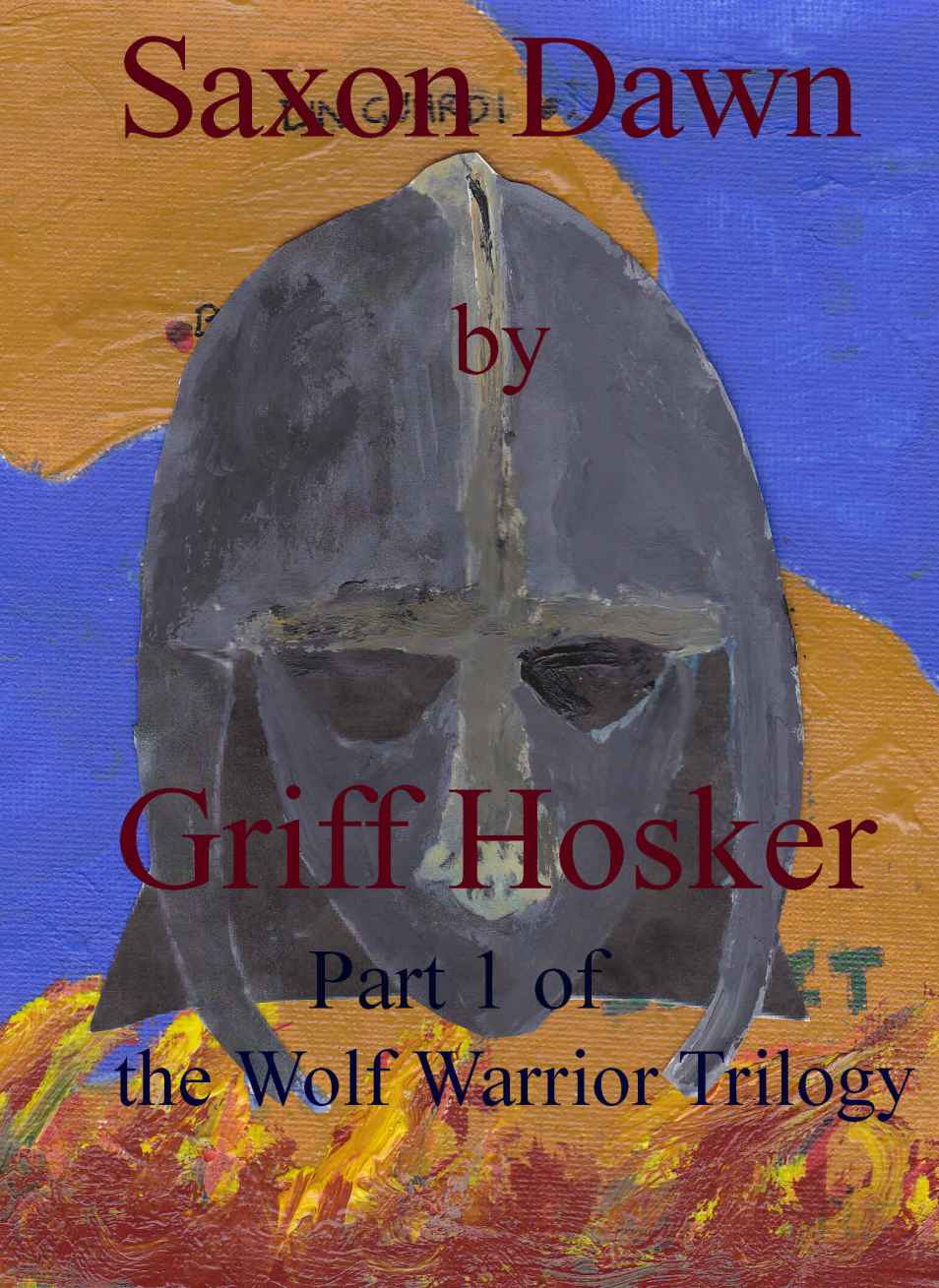 The author has asserted their moral right under the Copyright, Designs and Patents Act, 1988, to be identified as the author of this work.

All Rights reserved. No part of this publication may be reproduced, copied, stored in a retrieval system, or transmitted, in any form or by any means, without the prior written consent of the copyright holder, nor be otherwise circulated in any form of binding or cover other than that in which it is published and without a similar condition being imposed on the subsequent purchaser.

This is dedicated to you my readers. I am gratified that you continue to buy my books and, I hope enjoy
them. I will continue to write them, if only because I enjoy creating the stories and the characters and, I hope, bringing history to life. A special thanks to Rich and Alison who are always the first to get my books.  I appreciate your support and your comments. I am also grateful to my wife Eileen for her much needed proof reading.

Britain in the late 6
th
Century

I was seven years old before I ever heard of
either the Angles or the Saxons but their coming changed my life for ever. My name is Lann, and my people were the last of the Britons, the last of the people who lived alongside the Romans before the Angles, the Saxons and the Norse came and stole our land. Our life, before they came was simple and hard but bearable. We lived in the land which the Romans had called Britannia but they had left in the time before my grandfather.  We had been told tales of their buildings and their warriors, but they were just a story, to be told at night when the wolves howled and we listened for the sound of raiders coming for slaves. They were told in the hope that one day they would come back and bring prosperity and security to this land once more. The wall, which the Romans had built, lay many day’s travel to the north. We lived in the land called Hen Ogledd.  We were the last of the Britons or so my parents had been told by the king and his warriors when they had once travelled through our land.  I had seen neither him nor his warriors, but my mother and father assured me that he lived still and fought against the slavers and the invaders.

My family lived in an old hill fort which came from before the time, even of the Romans.  It was called Stanwyck and it had many ditches to protect it and high ramparts. A stream ran though it and we were comfortable there.  There were many families who lived within its defences but we were not a community; we had little to do with the others.  Each family kept to themselves.  In times of strife the men and boys defended the walls but there was no leader and no clan.  We kept a few animals and our diet was augmented by hunting and gathering. There were four in my family;
my father was called Hogan.  He was a quiet man but immensely strong. He had sired me when he was little more than a boy himself for he had been orphaned in a slave raid and had chanced upon my mother, Radha, who had also been left alone when the northerners raided.  They were a well matched couple. My mother was called Radha for her red hair and my father swore that she had some of the Hibernian in her; she had a fiery temper. She was also something of a shaman and healer.  It was said that she could read dreams.  Others said that she was a witch, although they always said that when well out of hearing distance of both of my parents. She had given birth to me when she was but fourteen.  We lived in a harsh world in those days. By dint of my father’s hard work he had served others and earned money enough to buy a few animals. He was also a powerful man with animals and could train them well.

So it was that as I grew I began to learn from the gentle man that was my father.  He gave me a pup he trained so that I
could look after the small flock of sheep we had gathered over the years.  Many of the animals had been the ones who escaped the wild northerners and were without owners, others had been gained through trade and barter.  When my brother Raibeart came along, three years after me, I was given the task of training him.  We kept the sheep on the higher pastures in the summer which is where we spent most of our time. I learned, when guarding the flock, how to use a slingshot and hit the occasional rabbit. My father promised me that, when I was a little older and stronger, he would make me a bow and teach me how to use it. He was so powerful that he could pull back a yew bow which was almost as tall as he was.  It meant we ate well for he was a good hunter.  When we had a surplus we traded it with the others who shared our hill fort or with the traders who still trudged up and down the old Roman Road which ran nearby. They were our only contact with the rest of the world and it was from them that we learned of the coming of the Angles and the Saxons.  We were told that they came from across the sea and they were fierce warriors.  The traders left us in no doubt that they would come to our quiet backwater of Britannia.  It was only a case of when.  I saw the looks my parents exchanged and it worried me.  I saw concern on their normally calm faces. If they were worried then the Angles were to be feared.

Raibeart and I had been out with the sheep and Wolf, my sheepdog. We drove them from the hills back to the willow pens my father and I had built.  We had just put the last hurdle in place when Wolf put his ears down and began to bark; that meant only
one thing, strangers. I took out my sling and looked towards the ramparts in the north. Others had emerged from their huts with sticks and farming tools.  We were not a violent community but I knew that we would defend ourselves if attacked.

I saw the adults relax as they saw the frail woman and the
thin, weeping child come through the entrance to the south. The rest of the people went back into their huts but my mother and father remained outside.  They were both intelligent and thoughtful people.  When visitors passed through, it was they who spent the longest time asking questions and they were both hospitable.  Perhaps it was the fact that they had been left alone that made them so compassionate, I do not know.  The woman and the thin, emaciated child made their way towards us.

“Welcome, I am Hogan and this is my wife Radha.  You look as though you have travelled far
.”

In answer she collapsed to the ground and the child fell upon her crying
and hugging her still form. “Take her inside.  Lann, fetch some fresh water from the stream.”

By the time I returned to the hut
, with the pot filled with cool water, my parents had laid the woman on the furs by the fire. My father smiled as he took the water from me.  “Look after the boy eh Lann?  He looks terrified.”

We always had a pot of thin soup on the fire; somehow it never seemed to run out and my mother put some in a beaker and
held it to the woman’s lips. I turned to the boy.  “What is your name?” he stared at me in terror.

My father handed me a deer bone from a pot.  There was a little meat still on it. “Give it to him.
He, too, looks hungry and then pour him some water.”

I handed the bone to him and he began to attack it as though he had not eaten in days.  When I passed over the beaker he still retained hold of the bone.  He reminded me of the dogs when they were given food and they protected it with their paws and growled at any who looked enviously at it.

“Come we will eat now.  The woman is sleeping and the boy looks happier.”

Our fare was the same as the woman and the boy’s.  We
also had soup which we ate from crude pot bowls my mother had made from local clay. She could have bought some from the pot maker who lived not far away but it was cheaper to barter some meat for the use of her oven. Thanks to my father’s skill our diet was more varied than most.

We had finished when the woman stirred and the child raced to her side. “Thank you for your kindness.  We have not eaten for some days.”

“You are welcome.  Have you travelled far?”

With the boy nestled in her arm she told us her story. “I am Monca and this is my son
, Aelle. I lived south of the old Roman fort with my husband and three sons. One day the Angles came and they killed my husband and my sons.” Her voice was flat and without emotion as though she had cried all the feelings out of her.  “They killed every man and boy. I was then taken.” She looked at my brother and I and I saw the look exchanged between my parents.  I did not know what it meant but they did for they drew closer together. She pulled her own child in tightly to her thin body. “This is the child I had with Scead.” She gave a shudder.  “He was a cruel man and he liked to beat me. The river fever took him in the spring and I left with my son before the other Angles discovered it for I would have been taken by another.” She shuddered.  “Were it not for Aelle, I would have killed myself. We heard that some of the older people lived near to the wall and we have walked all this way seeking people of my own kind and not the invader.  You are the first that have shown kindness.” She hesitated, “Are you Christian?”

“No we worship the older gods and you?”

“No I also worship the gods of this land but Christians are said to show kindness to strangers.” She struggled to rise.  “Thank you for your help.”

“Where will you go?”

The blank look on her face told them that she had no idea; she was just doing what she had done since fleeing the Angles. She was getting as far away as she could from the pain and the torture of regular beatings. Mother looked at father who nodded.  “No, you shall stay with us. You will be safe here.”