Read Say You Will Online 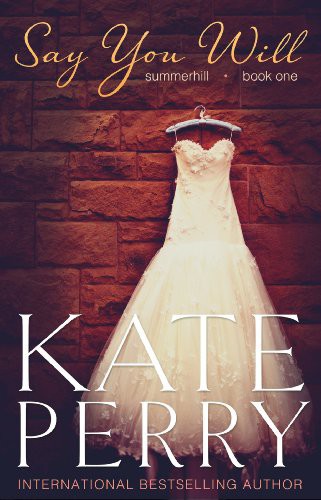 “Can’t wait for the next in this series…simply great reading. Another winner by this amazing author. “
–Romance Reviews Magazine

“A winning and entertaining combination of humor and pathos.”
–Booklist

A few simple words—words that had turned her world upside down three days ago.

Rosalind Summerhill stood in front of her family’s ancestral house in London, a hard grip on her carry-on. Although “house” didn’t do it justice. The Mayfair mansion was straight out of a Jane Austen novel, with its red brick exterior and marble interior.

She didn’t want to be here.

A pep talk—maybe that’d help. If anything, at least it’d put off going inside for a few more minutes. Pulling out her phone, she called her best friend.

Bijou answered the phone on the first ring, as if she’d been waiting for her phone call. Knowing Bijou, she probably had been. “Have you arrived?”

“I know you don’t want to be there,” Bijou said, “but you had to go or you’d feel all sorts of guilt and remorse. He was an ass, but he was still your father.”

“He really was an ass.” She chuckled mirthlessly. “Remember how my father called me when I got the scholarship to FIDM and said I was wasting my life? And then the next week he sent me that fancy leather portfolio because he wanted me to look proper?”

“Of course I remember. I wanted to pummel him.”

“He thought playing with dresses was frivolous.”

“Like being an earl for a living isn’t?” Bijou’s talons always came out when her loved ones were threatened. “You help women become goddesses for a day. There’s nothing frivolous in making another person feel wonderful, especially on a special day like her wedding.”

Rosalind remembered the expression on her mother’s face whenever she put on a new ball gown: blissful. It wasn’t an emotion Jacqueline Summerhill normally exhibited. Watching her mother transform that way was the reason she became a designer.

“Go inside, Rosalind,” her best friend urged. “You’re doing this for your mom anyway. I doubt your dad’s going to give a damn at this point, wherever he is.”

At one time, she’d have done anything to connect to her mother, but she’d given up on that dream years ago. You could only beat your head against a stone wall for so long.

“You need to see your mom and sisters,” Bijou continued. “Maybe this can be a new beginning for you all. Maybe now that he’s gone you can have an easier relationship with your family.”

Did she want that?

She realized she did—especially with her mother. Part of her still longed to be the reason Jacqueline Summerhill smiled in happiness. So she nodded, even though she knew it was a lost cause. “Okay. I’m going in.”

“Good,” Bijou said with conviction that made Rosalind feel better about her decision. “If I were there, I’d give you a shot of whiskey with a pickleback and a hug, but since I’m not I’ll just tell you I love you. Do this and come home.”

“Okay,” she said to herself, because Bijou was already gone. Feeling marginally bolstered, she tucked her phone away and looked up at the imposing entrance.

Stillness greeted her as Rosalind opened the door and set her carry-on down. The house felt creepy. Dead. As though it were in mourning for its master.

Not that its master had been kind to it, she noted as she touched a curled piece of peeling wallpaper. It was sad but not surprising. The family had long run out of money.

The mere fact that she’d let herself in was telling—in their more affluent days, her mother would have hired someone to man the door for special events. From what Beatrice had told her, only their former governess, Fran, was still employed. It wouldn’t have surprised her if she stayed without being paid.

Exhaling, she reluctantly shrugged out of her coat, left it with her bags, and headed down the corridor to the old ballroom, where Bea said the memorial was being held.

The doors were closed. She opened one, wincing as it screeched. She peeked inside, ignoring the people in the back row who turned to look at her.

Taking a deep breath, Rosalind stepped inside. The room was set up much like a wedding would have been: two sides, a wide aisle in the middle, and a podium at the front where a man droned on about the raptures of heaven. She surveyed the room, surprised by the number of people present. Knowing her father, they were there to celebrate his death.

She made a face. No unkind thoughts—not today.

There were two empty seats: one next to her oldest sister Beatrice to the left in the second row and the other in the last row, next to a man she didn’t recognize. He was dark haired, tanned, and chiseled in the best way. He watched her over his shoulder, but then he turned around and leaned toward the blonde sitting with him.

Taken. Unfortunate. He’d have made for a great fling.

She studied the blonde’s profile, a classic beauty despite her tear-blotchy skin. Rosalind frowned. The woman looked familiar, though she couldn’t place her. Maybe she was one of her sisters’ friends.

Edging along the side of the room, she eased herself next to Beatrice.

“You’re late,” Bea pointed out under her breath.

She was lucky she’d made it at all. Fog in San Francisco had delayed her flight. “It’s nice to see you, too, Bea.”

The corner of her sister’s mouth quirked, and, without a word, she reached over and held Rosalind’s hand.

The tension in her shoulders eased, and she leaned into Bea’s shoulder.

In the front row, her next oldest sisters, Viola and Portia, flanked their mother Jacqueline, who listened with razor-sharp focus, her face frozen in a mask of politeness. What could you expect given that she was embroiled in the scandal of the decade?

Viola was hard to read, but Portia looked like she was grieving hard. Portia had always chased their father’s love. None of them had ever had the heart to tell her it’d been pointless.

On Viola’s left, an adolescent sat looking sullen and resentful. Given the resemblance to Viola, Rosalind figured that was her niece Chloe. The girl looked different than the sunny four-year-old she’d been when Rosalind had left for the States ten years ago.

Fran, who sat next to Chloe, turned to give her a warm wink.

Rosalind smiled for the first time in the past forty-eight hours. Fran had raised them all. She’d been more of a mother to them than Jacqueline had been.

Exhaling those regrets, Rosalind craned her neck. “Where are Imogen and Titania?”

“Gigi is on a movie set somewhere in the Pacific,” Bea explained softly. “She couldn’t leave. No one knows where Titania is, like usual.”

She frowned. Imogen and Titania had been teenagers when she’d left. She didn’t know the women they’d grown into, other than the basics: Gigi was an actress and Titania a photographer.

The droning words of the man giving the eulogy filtered into her consciousness, and she transferred her attention to him. After listening for a minute, she whispered to Bea, “Pillar of the community? Giver to those less fortunate?
A family man?
Is he talking about Father?”

“Utter bollocks, isn’t it? Especially given that he died in a fiery car crash in France while on holiday with his mistress.” Bea shook her head. “It’s a shock, isn’t it? I thought he’d live to plague us forever.”

“Plague was a good way of putting it.” In public, Reginald Summerhill, Earl of Amberlin, was circumspect, but in private he never hesitated to make his displeasure known. And displeasure was all he felt for his daughters.

As if reading her mind, Bea said, “Remember the time I dressed as a boy and entered the Suncrest pheasant hunt without his knowledge? He was livid when he found out.”

“Because you outshot him.”

Rosalind nodded. The only thing their father had wanted in life was a boy to carry on the family title. He had six girls instead and held it against them no matter how successful they were. He’d hated that a distant American cousin would inherit the title upon his death.

Rosalind glanced at their mother. “Is she holding up?”

Her sister only arched her brow.

Right. She couldn’t imagine how embarrassing it was to have your husband die alongside another woman, even in a distant marriage like her parents’.

Beatrice leaned toward her. “We need to discuss Mother and her financial situation.”

“Yes, and it’s dire unless we sell some of the relics in this mausoleum.” Her sister nodded up at the chandelier above them. “That monstrosity is worth a fortune in itself, and there are three just in this ballroom.”

Viola glanced over her shoulder and gave them the same sort of look she’d been giving her teenage daughter.

“What?” Rosalind exclaimed, gaping at her sister. “I always knew we didn’t have much cash, but is it that bad?”

“Worse.” Beatrice pretended like she was paying attention to the eulogy, but out of the corner of her mouth she murmured, “Father made a bad investment a few months ago and lost the remaining savings. I tried to stop him, but he never listened to my advice.”

Their mother turned and gave them a cross look that said
Behave
and
Don’t embarrass me any more than I am
.

“We’ll discuss it after this ludicrous service is over,” Beatrice promised.

Nodding, Rosalind became aware that people were watching them, so she lifted her head and channeled the infamous Summerhill pride. As she glanced over the crowd, that dark-haired man caught her attention again. He gazed at her with focused concentration.

Bijou would have said he was hot, and her friend would have been right. Rosalind was always looking for inspiration for her designs. This man inspired—to take her clothes off. She’d have been tempted to walk over to him and see if he was interested. Bijou would have told her funerals and sex went hand in hand.

If only it weren’t for the woman next to him, who watched Rosalind as if she wanted to inspect all her seams and test her fabric.

The service ended abruptly. Their mother strode out, regal and poised in her dark suit, followed by Portia, Viola, Chloe, and Fran. Beatrice and Rosalind filtered out after.

“The reception is in the drawing room,” Bea said. “Do you remember where that is?”

The sarcastic question should have annoyed her, but she couldn’t help smiling. “You mean you aren’t going to hold my hand and take me there?”

“Brat.” Lips curving, she made a point of slipping her arm through Rosalind’s and leading the way.

Jacqueline Summerhill stood in the middle of the room, talking to Fran. Fran whispered back intently and then turned her around by her shoulders.

Strange. Her mother and governess had never had a close relationship, definitely not one that included hushed discussions or physical contact.

Some Like It Deadly by Heather Long
Hannah's Blessing by Collette Scott
Unbeautifully Loved (Breathe Again) by Grayson, Emma
The Veils of Venice by Edward Sklepowich
The Rescuer by Joyce Carol Oates
Sympathy for the Devil by Howard Marks
Survivors by Sophie Littlefield
Road Closed by Leigh Russell
Showstopper by Pogrebin, Abigail
A Christmas Memory by Capote, Truman
Our partner