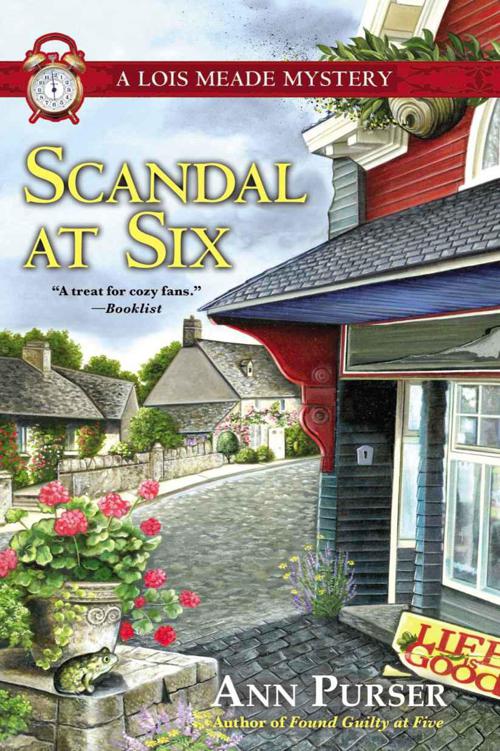 J
osie
V
ickers, née
M
eade, stood at the top of the steps leading into her village shop.
T
he village was
L
ong
F
arnden, generally thought to be almost exactly in the centre of
M
iddle
E
ngland, and all around were golden stone houses surrounded by green fields and woods that had once housed hunting lodges for
H
enry
VIII
.

It was the first day of spring, and for once it was living up to its promise. Josie shaded her eyes from the brilliant sun as she glanced up and down the street, clearly looking for someone. Nothing but a small red Fiat speeding through, breaking the speed limit. She frowned. Her mother, Lois Meade, had promised to be with her at opening time to help sort the post and stack the daily newspaper racks, and she was late.

“I suppose she’s held up on the phone,” Josie said to her husband, Matthew, as he got into his police car.

“She’ll be down in two ticks, me duck,” he said confidently. “Probably Gran needing help. Must go, anyway. See you at teatime.”

Lois Meade, businesswoman and amateur sleuth, was almost at the end of the short walk from her house to the village store when she heard her daughter scream. She ran inside, and saw through an open doorway Josie frozen to the spot at the entry to the shop storeroom.

“Look, Mum! Look!” Josie was pointing to the corner, where at first Lois could see nothing amiss. Then she heard a noise coming from under a pile of boxes. She could still see nothing, but suddenly the boxes started to move, and tins of baked beans rolled around, one or two finding their way into the shop.

“Hello? Who’s there?” said Lois in a croaky voice. “I’m coming in, and you’d better stay right where you are! We have a policeman on the premises, and there’s no way you can escape.”

Josie looked at her mother and said shakily, “It doesn’t speak. Can’t you see its head? It’s looking at us! I’m out of here, Mum, and you’d better come, too.”

Lois looked over the storeroom in the direction of Josie’s pointing finger. She drew her breath in sharply and grabbed Josie’s hand. In the corner was the largest snake she had ever seen outside Tresham Zoo. It stared at her with unblinking eyes, and she stared back, hypnotised.

She gulped, and said, “Ye Gods, Josie! We must shut it in and get the police. Is Matthew around?”

“Gone to work,” said Josie. “If we shut this door, there’s no way it can escape, so come on. Let’s lock it in, and send for help. Thank goodness you came in time.”

They turned away, and in one swift streak the snake slithered down over the boxes and across the floor into the shop. Josie screamed again, and Lois, with great presence of mind, pulled Josie with her out the front door, locked it and then shot round to the storeroom back entrance, shutting off all possible ways out. Then she returned to where Josie stood, still trembling.

“Mum, I can see it!” she said, peering through a window. “Its tail is sticking out from under the counter. Oh Lor, what are we going to do?”

“In trouble, girls?” said a man’s voice behind them. It was Derek, Lois’s husband, dressed in shorts and T-shirt, with a cycling helmet and goggles to protect his eyes.

“Oh my God, here’s Superman come to rescue us,” said Lois. “Good job you’ve turned up. There’s an enormous snake in there, and we’ve locked it in. It’s huge, Derek, and I think we should get the police. You said Matthew has gone to work, Josie? Yes? Right, then we have to call the police station in Tresham. They’ll know what to do.”

“Couldn’t we catch it and put it in a box and take it to the zoo? I bet it’s escaped from there. No need to call the police, surely? You hold the box and I’ll put it in. I expect there’s empty cardboard boxes out the back, Josie? Better get a big one.”

Schoolchildren were gathering at the bus stop opposite the shop, and one crossed the road. “You open, Mrs Vickers? Mum says please can I have a chocolate bar to take for my lunch?”

“Not open yet, I’m afraid,” said Lois. Josie was still peering through the window, and then she yelled out, “Dad! It’s come out, and it’s slithering towards the door. Can it get through the letter box? Oh God, I’m scared.”

All this was said at the top of her voice, and like a pile of magnetised iron filings, the schoolchildren in their dark-blue uniforms came running across the road and pressed their noses to the window.

But when the bus came and stopped, the driver saw the crowd gathering outside the shop and came across the road to see what was happening.

Derek was busy on his mobile, while Lois and Josie tried to persuade the children to go off to school. At last they were shepherded aboard by the driver, and drove off.

“It’s all right, loves,” said Derek, who, after all, had changed his mind about tackling a giant snake. “I phoned the zoo, and they’re sending someone from the reptile house to pick it up. It went missing last night, and they said it was definitely stolen. How and why it came to be in your shop, Josie, is a puzzle, but the police have been informed.”

Dead Sexy by Amanda Ashley
The Lemoine Affair by Marcel Proust
I Want You to Want Me (Rock Star Romance #2) by Erika Kelly
Always: You'll Never Walk Alone by Whiting, Keith
The Triggering Town: Lectures and Essays on Poetry and Writing by Richard Hugo
Summer Snow by Pawel, Rebecca
Eleven Eleven by Paul Dowswell
Make No Mistake by Carolyn Keene
Flying Fur by Zenina Masters
After Hours by Dara Girard
Our partner