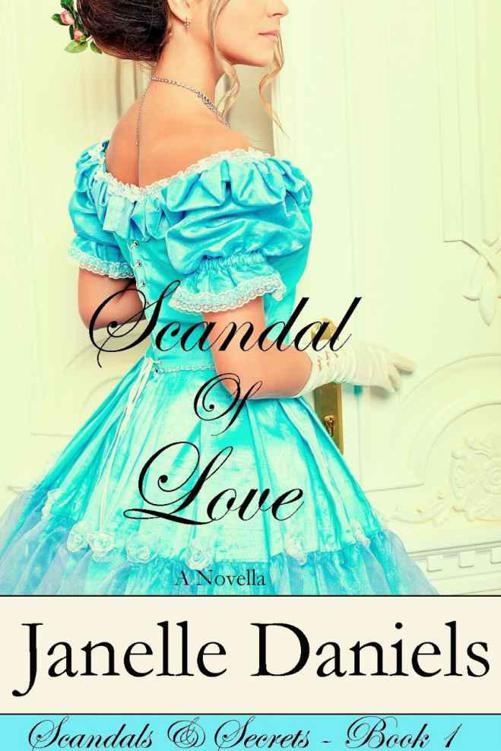 This is a work of fiction. Names, characters, places, and incidents either are products of the author's imagination or are used fictitiously. Any resemblance to actual events or locales or persons, living or dead, is entirely coincidental.

If someone had told Lady Sera Winters that her needlework was the finest in all of England, she would have been the first to laugh.

Glancing away from the picturesque scene outside of her window, where the sun shined bright through the shade trees in the garden, Sera picked up her needlepoint and examined the yellow rose she had stitched yesterday morning. The lopsided petals looked more like they were dying than in a state of bloom. And since she was being honest with herself, the leeched colors only enhanced the look of decay.

Chuckling, she picked up a new strand of honey-colored floss. Her needlepoint skills had not improved over the years as her mother had hoped, but that didn’t stop Sera from enjoying it. The repetitive movements were what soothed her, what had her returning time and again to destroy one of woman’s oldest art forms.

It didn’t matter that she wasn’t good at it, it only mattered that she kept doing it. And if someone happened to receive one of her works as a present, she wasn’t above laughing at herself when they cringed.

If one couldn’t laugh at one’s self, what was the point? Everyone took themselves far too seriously, and no one more so than debutants.

Finding a match during the season was a life or death situation for most of these women, but she couldn’t blame them for their attitude. With many of their families in bad financial straits, marrying for money was a common occurrence in their world.

The howling in the hallway had her jerking upright, the needle she worked with stabbing her finger. The commotion only increased, causing her to move toward the door to see what was happening, but the sound of her father’s heavy footsteps made her pause. The door to her private sitting room opened, allowing her disheveled father to stumble in.

“Father! Are you all right?” Sera ran to him, her heart racing in panic as she saw the despair in his eyes.

He shook his head, whimpering as he slumped into one of the rose silk-backed chairs.

In shock, Sera watched her father mumble to himself for a moment. “You’re ruined, Sera. It’s over. All our hopes for you to be the next Duchess of Wathersby, your mother’s final wish, are gone.”

Kneeling in front of him, she touched his knees to get his attention. “What do you mean? What has happened?” she asked, using a soothing voice. When her father was in such a state, the best thing to do was to remain calm. He would do enough fretting for the both of them. It had been that way since her mother had died three years ago. Ready to make her debut into society at age seventeen, Sera hadn’t been prepared to take over the care of her father. In cases such as these, where her father became overwrought, she longed for her mother’s moderating influence.

She needed to calm him down, get him to a point where she would be able to get information from him.

Head jutting up, he looked at her as if she were not there before jerking his fingers through his hair, making it stand on end. “The rumor started last night, but I didn’t hear of it until this morning. It is being said that you were compromised by Lord Devericks, Earl of Surrant, at Lady Berkley’s ball last night.”

“What? How is that possible? I’ve never even met him.” She tried to recall what he looked like, but she couldn’t bring an image to mind. “Didn’t he just inherit?”

“He inherited about three months ago, but he hasn’t been seen much in the last several years.” Her father shook his head. “To think of all we worked for only to have it snatched away. With your mother’s golden hair and sapphire eyes I was sure you would be able to….” he trailed off, shaking his head. “Well, with this scandal attached to your name, no decent man of good breeding will make an offer.”

The despair that plagued her father hit her full force. Sera knew her father’s words were true. What gentleman would willingly attach himself to such a scandal? She doubted that Lord Bromley, the Duke of Wathersby, would ever consider her as a potential bride after this. There would not be a match between herself and the handsome duke.

“There must be something we can do. The gossip isn’t true. Others must know as well,” she said, even though she couldn’t convince herself of it. Even if the gossip were proven false, her reputation would still be sullied. There was no way to completely erase it.

Her father shook his head. “We both know there is nothing to be done.” He sighed heavily and looked down into his daughter’s eyes. “You are ruined. And no man who is worth anything will have you now. We will need to buy a husband for you.”

She shot to her feet, indignation straightening her spine. “Absolutely not! I will never buy a husband. I would rather not marry than be forced to wed a fortune hunter.”

“You will marry. Do you not want your own home and family?”

She remained silent. Her father was right. She did want those things. But were they really worth anything without love? A home was made from love; a family was created with love. What kind of home and family would she have if she bought her husband?

No. She would marry for love. It had always been her greatest wish, and while it might be difficult now, she would still attain it.

“You know that is what I wish for, but I will not buy some man and hang my head in shame. I have done nothing wrong.”

He sighed. “I’ve always admired your determination, Sera. But in this instance it will do you no good. If you want a husband, we must buy one. Quickly. There is no other way.” He stood from his chair and looked at her with regret in his eyes. “Let me know what you choose. I will not force a husband upon you. It will be your choice.”

With her final nod, he left.

Looking around her room, she wasn’t filled with the same feeling of contentment. Though ample light spilled through the arched windows, it felt as if it were closing in on her. She was trapped, stifled.

How could this have happened?

Sinking into a chair, her shoulders sagged. Was there really no hope for a love match? The thought paralyzed her.

How would she face everyone now that she was ruined? Over her last two seasons she had seen the ton shun more than one debutant for her indiscretions.

Who had started the rumor?

She had been surprised during her first season to be described as a diamond of the first water. She had always known she was pretty, but she didn’t consider herself to be one of the most beautiful women that year.

With her wealth and beauty, she had been one of the most sought after debutants the past two seasons. And she had certainly made a few other girls jealous.

Why did this have to happen now? She had been so close. So close to all of her dreams. Lord Bromley was the man for her, she knew it. And now it was too late.

Quinton Devericks, the Earl of Surrant, wasn’t sitting in a parlor when he heard the news. He was drunk. Well, halfway drunk. It wasn’t often that he indulged in too much drink, but tonight, he made an exception. The financial hole he had been trying to climb out of had just gotten a lot deeper. Sure, he had finally managed to reconcile with his father’s creditors, but one fact was blatantly clear: he was broke.

There was enough money left over to pay for his living expenses for a few months, but not much else. Properties that had been in his family for hundreds of years had been sold off in order to pay his father’s gambling debts. All that was left were the entailed properties that he was forced to keep, and those were in a sad state of disrepair.

He needed money, and he needed it soon if he was to save his remaining estates from ruin. There was only one thing to do, and the thought struck him to the core. Shuttering, he took another bracing gulp of scotch.

He needed to marry. Quickly.

“Congratulations are in order, my friend,” Lord Harold, Viscount Gloucher, said before seating himself across from Quinton. “Champagne, please,” he called out to a butler that seemed to blend in with the walls.

White’s, a gentleman’s club for only the most exclusive members of the ton, was a place a man could easily go for comfort. Not only was there gaming, which Quinton vowed never to try his hand at, their cellar had some of the finest liquor ever created.

“What shall I congratulate you on?” Quinton asked, taking one last pull of his scotch.

Harold laughed. “Come now, no need to be modest with me. It’s all over town. Brilliant, by the way. Truly. I doubt I would have ever thought to do the same.”

Quinton shook his head, trying to clear his foggy brain. “Honestly, I have no idea what you’re referring to. What is it you think I’ve done?”

“Secured yourself an heiress. I knew you needed money, and that it would only take you a short time to come to the same conclusion.” Their champagne was poured in a cascade of golden bubbles. Harold saluted Quinton with his glass. “And what a prize you’ve secured.”

What was Harold talking about? “I’ve done no such thing. I only came to the realization late last night that I needed a wealthy bride, and I’ve been here ever since.”

The glass in Harold’s hand paused halfway to his lips. “You mean you weren’t at Lady Berkley’s ball last night?”

Quinton’s eyebrow lifted as he gestured to his rumpled clothes. “Do I look like I went to a ball last night?”

“No.” Harold set his glass down very carefully. “Just so I’m clear, you did not go to Lady Berkley’s ball?

“And you were here all night?”

“And there is no way that you compromised Lady Sera Winters in Lady Berkley’s library last night?”

“No. Wait, what?” Quinton jerked forward. “Who’s Lady Sera? Someone thinks I compromised her?”

Harold looked at him with surprise. “Lady Sera is the Duke of Dorchester’s daughter. And it isn’t someone who thinks that. It’s everyone. The news has been on the tip of everyone’s tongue this morning. She is ruined.”