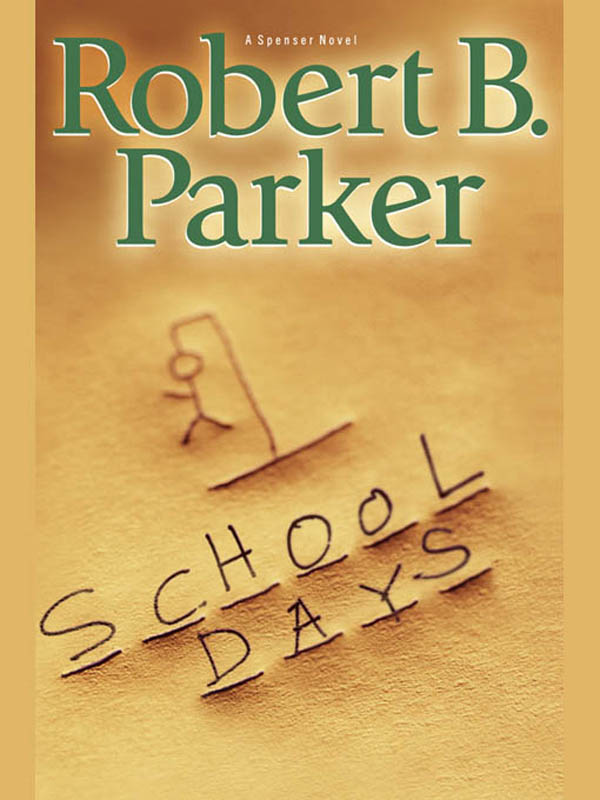 A
G. P. Putnam's Sons
Book / published by arrangement with the author

God Save the Child

ALSO BY ROBERT B. PARKER

A Year at the Races
(with Joan Parker)

S
USAN WAS AT
a shrink conference in Durham, North Carolina, giving a paper on psychotherapy, so I had Pearl. She was sleeping comfortably on the couch in my office, which had been put there largely for that purpose, when a good-looking elderly woman came in carrying a large album of some kind and disturbed her. Pearl jumped off the couch, stood next to me, dropped her head, and growled sotto voce. The woman looked at her.

“What kind of dog is that?” she said.

“A German shorthaired pointer,” I said.

“Aren't they brown and white?”

“Hello, Pearl,” the woman said, and walked to my client chair and sat down. Pearl left my side, went and sniffed carefully at the woman's knees. The woman patted Pearl's head a couple of times. Pearl wagged her tail slightly and went back to the couch. The woman put her large album on my desk.

“I have kept this scrapbook,” the woman said to me, “since the day my grandson was arrested.”

“Hobbies are nice,” I said.

“It is far more than a hobby, young man,” the woman said. “It is the complete record of everything that has happened.”

“I should hope so,” the woman said.

She placed it on my desk. “I wish you to study it.”

“It is yours,” she said. “I have another copy for myself.”

The woman's name was Lily Ellsworth. She was erect, firm, white-haired, and stylish. Too old for me, at the moment, but I hoped Susan would look as good as Mrs. Ellsworth when we got to that age. Being as rich would also be pleasant.

“Demonstrate that my grandson is innocent of the charges against him.”

“He is innocent,” she said. “I will entertain no other possibility.”

“What I know of the case, he was charged along with another boy,” I said.

“I have no preconceptions about the other boy,” Mrs. Ellsworth said. “His guilt or innocence is of no consequence to me. But Jared is innocent.”

“Our family has been represented for years by Cone, Oakes,” Mrs. Ellsworth said. “I asked our personal attorney to get me a recommendation. He consulted with their criminal defense group, and you were recommended.”

“Do they represent your grandson?” I said.

“No. His parents have insisted on hiring an attorney of their own.”

“Too bad,” I said. “Cone, Oakes has the best defense lawyer in the state.”

“If you take this case and need to consult him,” Mrs. Ellsworth said, “you may list his fee as an expense.”

“Do you know who they have hired?” I said.

“His name is Richard Leeland. He is my son-in-law's fraternity brother.”

“You don't know of him,” Mrs. Ellsworth said.

“Perhaps not,” Mrs. Ellsworth said. “But being Ron's fraternity mate is not in itself much of a recommendation.”

“Ron Clark,” she said. “I still remember, approximately, a passage in
The Naked and the Dead
where someone describes a man as âWestchester County, Cornell, a DKE, and a perfect asshole.' Mailer could have been writing of my son-in-law. Except that Ron grew up in Greenwich and went to Yale.”

“A man can overcome his beginnings,” I said.

“Wow,” I said. “It's been years since someone called me a wisenheimer.”

“I may not be current in my slang,” Mrs. Ellsworth said. “But I know people. You are a wisenheimer.”

“But not just a wisenheimer,” she said.

“I am persistent, and fearless, and reasonably smart.”

“If I hire you for this, will you put Jared's interests above all else?”

“No,” I said. “I put Susan Silverman's interests above all else.”

“That's as it should be,” Mrs. Ellsworth said. “Any other problems I should be alert to?”

“And,” I said, “you have to understand that if your grandson is guilty, I won't prove him innocent.”

“He is not guilty,” Mrs. Ellsworth said.

I
STOOD AT
my window on the second floor and watched Mrs. Ellsworth as she came out of my building and rounded the corner, walking like a young woman. Pearl got off the couch and came over and looked out the window with me. She liked to do that. Mrs. Ellsworth got into a chauffeur-driven Bentley at the corner of Berkeley and Boylston.

“She can afford me,” I said to Pearl.

Late summer was in full force in the Back Bay. But, August or not, it was gray and showery, and quite cool, though not actually cold. Most of the young businesswomen were coatless under their umbrellas. I watched as the Bentley,
gleaming wetly, pulled away from the curb and turned right onto Boylston. The driver would probably turn right again at Arlington, and then go up St. James Ave to the Pike and on to the western suburbs, with his wipers on an interval setting. I watched for a bit longer as two young women in bright summer dresses, pressed together under a big golf umbrella, crossed Boylston Street toward Louie's. Summer dresses are good.

When they had crossed, I turned back to my desk and sat down and picked up Mrs. Ellsworth's scrapbook. Neatly taped on the cover, an engraved calling card read âLily Ellsworth,' with an address in Dowling. I opened the scrapbook and began to read. Pearl went back to the couch. She liked to do that, too.

Two seventeen-year-old boys wearing ski masks had walked into the Dowling School, a private academy they both attended, and opened fire, each with a pair of nine-millimeter handguns. Five students, an assistant dean, and a Spanish teacher were killed. Six more students and two other teachers were wounded before the Dowling cops arrived, and the kids had barricaded themselves in the school library with hostages. The Dowling Police kept them there until a State Police hostage negotiator arrived with a State Police SWAT team standing by. Negotiations took six hours, but at three in the afternoon, one of the boys took off his ski mask and swaggered out, hands in the air, smirking at the cameras. The other one had disappeared.

The captured boy was named Wendell Grant. After two days of questioning, he finally gave up his buddy, Jared Clark.
Clark denied his participation but had no alibi for the time, and was known to hang with Grant. After a few days in jail, Clark confessed. There was much more. Newspaper stories, transcripts of television and radio newscasts. Copies of police reports and forensic data; pictures of the boys. Neither was unusual-looking. Profiles of victims, interviews with survivors, and bereaved relatives. It didn't offer me much that was useful at the moment, though it would be a good source for names and dates later. And I didn't expect it to be a good source of facts, now or later.

When I got through reading the scrapbook, I called Rita Fiore.

“What do you know about a defense attorney named Richard Leeland?” I said.

“Never heard of him,” Rita said.

“He's counsel for one of the kids who shot up the school in Dowling,” I said.

“That kid shouldn't have a defense counsel I never heard of,” Rita said. “But, I gather, at least he has you.”

“His grandmother took your recommendation.”

“Ah,” Rita said. “That's who was asking. Everyone was so fucking discreet, I didn't know who the client was. How come they didn't hire me to help you or, actually, hire you to help me after they hired me?”

“Leeland was the kid's father's frat brother at Yale.”

“I had other plans,” Rita said.

“I thought you were seeing that police chief from the North Shore,” I said.

“I was,” Rita said. “But he loves his ex-wife. You. Him. Every winner I find is in love with somebody else.”

“Maybe that's not an accident,” I said.

“Or not,” I said. “Susan's in North Carolina. I'll buy you dinner at Excelsior.”

“How easily I settle,” Rita said. “I'll meet you there at seven.”

“Have your secretary make us a reservation,” I said.

Touch&Geaux by Unknown
Grave Doubts by Elizabeth Corley
A Camping Spree with Mr. Magee by Chris Van Dusen
Fallen Angels, the Watchers, and the Origins of Evil by Joseph B. Lumpkin
Fairstein, Linda - Final Jeopardy by Final Jeopardy (v1.1) [html]
Church Girl Gone Wild by Ni’chelle Genovese
On Dublin Street by Samantha Young
I Am a Cat by Natsume Soseki
White Beech: The Rainforest Years by Greer, Germaine
One Night with a Quarterback by Jeanette Murray
Our partner