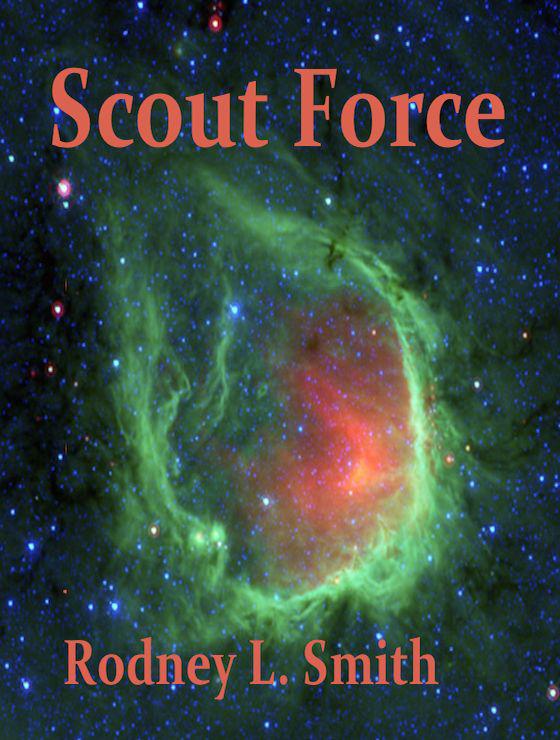 Other books in this series

Any resemblance to persons

living or dead is entirely coincidental

I dedicate this book to my wonderful wife, Regan, otherwise known as Conan the Grammarian and my Comma, Comma, Comma, Comma Chameleon, for her tireless and effective editing of this manuscript.

The aged commercial transport carrying Ensign Kelly Blake landed roughly on the planet Armstrong in the Antares system, the home of Fleet Base 17, otherwise known as Antares Base.

Kelly wondered if the pilot had forgotten how to land during the tediously long voyage.

The transport had certainly taken its time getting here, and the spaceport controllers took their time assigning it to a gate.

Things happened at a relaxed pace out here in the new worlds.

The flight's pace seemed to presage how the rest of his career would go.

Eventually, the steward tapped on his door to tell him he could move to the disembarkation deck.

Kelly checked himself in the sparse cabin’s mirror.

He felt out of place in his new, standard-issue, blue-black Fleet uniform.

He automatically picked at the odd bit of thread that always appears on new uniforms.

It was a simpler one than the Fighter Force’s forest green uniform he had previously worn.

He would miss his leather flight jacket and the rank epaulettes on his shoulders.

The single braid stripe on his sleeve seemed…inadequate.

The shoes Fleet personnel wore were flimsy compared to his sturdy calf-length fighter boots, but those were in his past now. The only reminder of his past life would be the gold fighter wings glistening on his chest.

General Bugarov could drum him out of the Fighter Force, but he had earned his wings.

She couldn’t take them away.

He instinctively wiped them with a cloth, although they already shone immaculately.

Kelly had run afoul of one of the senior officers of the Fighter Force:

General Irina Bugarov, not so affectionately known as Old Bugger Off.

She had come up through the Pollux Planetary Defense Forces, and had held every position from flight officer to Planetary Sector Defense Commander.

With no prospects for further advancement in the planetary chain of command, she applied for a lateral Fleet commission, was accepted, and rose in the ranks to be the senior fighter force officer in the 15th Battle Fleet.

As the Battle Fleet Fighter Commander, she had responsibility for five carrier fighter wings and overall command of the fleet fighter defense.

Kelly had the bad luck to expose a boneheaded tactical decision on her part, by inadvertently being in the right place at the right time to save the Fleet Carrier Bolivar from a K’Rang sneak attack.

She considered Kelly’s actions to have been insubordinate, bordering on direct disobedience of her orders.

It was only the intervention of Admiral Haddock-Halloway that kept Kelly from standing before a court-martial.

The admiral’s power was limited, though, and he couldn’t stop her from using her authority as the senior fighter force commander to do an end run and eject Kelly from Fighter Force.

Kelly’s new Fleet uniform was adequate, but would need to be replaced with one better tailored.

Kelly was sure General Bugarov had instructed the Bolivar's Fleet Supply Officer not to spend too much time fitting his new uniform.

The blouse was a bit loose across the shoulders and the pants bagged some under the seat.

Still, he looked presentable enough for Fleet Base 17.

His hair was black and close cropped.

His physique and looks were about average.

He didn’t consider himself to be anything that would make women swoon.

He gave himself a final look in the mirror, adjusted his hat, and proceeded to whatever this new life in the Fleet had to offer.

He grabbed his carry-on bags and proceeded to offload with the rest of the passengers.

The SS Constellation Draca was an older commercial interstellar cargo and passenger transport, not a military flight, so he had to wait his turn in line with the rest.

A Fleet Captain tried to push his way through the crowd, but was abruptly brought to a halt by two offloading contract laborers, who were unimpressed by his rank and sense of entitlement.

A ship’s steward fortuitously wandered by and stopped them from stuffing the captain into a storage locker just as Kelly moved to intercede.

The captain straightened his uniform, glared at the two workers, and stomped off.

No one further interfered with his bucking the line, although many a pair of eyes glared at his back.

A Tri-Vid terminal in the embarkation lounge was tuned to the Tri-Vid News Channel.

He looked up just as a breaking news feature started.

We have just learned that a week ago K’Rang forces attempted an unprovoked attack on the 15th Battle Fleet Flagship, the Fleet Carrier Bolivar, during routine maneuvers along the Galactic Republic border.

While details on the attack are sketchy, Fleet Spokesperson General Irina Bugarov made the following statement.”

General Bugarov marched into the press room on board the Bolivar in her forest-green flight suit, boots, and carrying her helmet under her right arm.

Those who did not know her would think she was the epitome of a confident and competent leader.

She strode to the podium and said, “I’m just back from inspecting the remains of the three K’Rang corvettes that penetrated our border in an attempt to strike the Bolivar.

Let me state up front there was never any danger to the Fleet and the Fleet was well within Galactic Republic territory.

Even though we were engaged in our training exercise at the time, our forces were alert to all possibilities.

The K’Rang ships were monitored shadowing the Fleet on the other side of the border.

They were observed moving toward the border and intercepted immediately upon crossing into Galactic Republic space.

The three missile corvettes were destroyed well out of range of the Bolivar.”

“This was a deliberate and unprovoked attack on the Fleet.

At no time did the Fleet approach any closer than 500,000 kilometers of our side of the border.”

A smallish woman in her early forties raised her hand and General Bugarov called on her.

“General Bugarov, I am Mona Freelander of the Centauri News Affiliates. Can you tell us why it’s been over a week since this incident happened and we are just finding out about it now?

We have also heard some rumors the attack was a bit more of a surprise than your comments would suggest.”

The casual observer probably would have missed it.

Kelly had felt its searing flames before and recognized it instantly.

The general paused, peered down at her pocket terminal, and replied, “We had to make sure this wasn’t more than an isolated incident.

We had to move the Fleet capital ships away from the border into a more defensive posture.

We took appropriate precautions to move the Fleet out of any possible danger of attack.

We conducted our investigations, determined there was no further danger, and then called this news conference.

Any rumors we were caught unprepared are simply fabrications.

The 15th Battle Fleet was and is in a state of constant vigilance.

With that, she quickly departed the newsroom to the shouts of further questions from the assembled reporters.

“Nagging rumors of the Fleet being caught off guard persist.

While we have no further response from the Fleet, we do have a comment from the Colonial Party Senate Whip, Senator Colleen Santari.”

An attractive, but severe woman in her thirties or forties stood before a podium bearing the seal of the Galactic Assembly upper house.

Flashes went off as the woman shuffled through her pocket terminal and prepared to speak.

“As the head of the Senate Galactic Defense Committee, I am calling hearings into this matter.

As you know, my party has been opposed to these provocative exercises so close to our border with the K’Rang.

If there are any indications of unpreparedness on the part of the 15th Battle Fleet, I will get to the bottom of them.

Kelly turned away from the screen as one of the transport’s officers called for the assembled passenger’s attention.

The purser indicated all port clearances had been completed and the passengers could disembark.

Kelly picked up his bags and strode into the spaceport.

The Armstrong Spaceport was typical of developing planets.

Small as far as spaceports went, it lacked many of the features found on some of the more prosperous planets closer to the Galactic Republic core around the Sol System.

What it lacked in features, it more than made up in drabness. The color scheme was bland with the predominant color being concrete grey.

It smelled faintly of curing concrete, further testifying to its newness.

The terminal was roughly shaped like the letter E, with the upper and lower legs pushed out at a slight angle.

Kelly’s transport was at the farthest gate at the end of the top leg, the interplanetary gates.

He passed businessmen shopping for souvenirs in kitschy shops and families waiting in line to enter carbon copy chain restaurants, as he made his way down the long corridor.

The terminal’s construction was adequate, but the fit and finish were not quite up to first world standards.

The locals had made an effort to apply the latest styles, but they just didn’t quite get there.

Everything seemed just a little off, like a picture frame slightly askew.

The size and condition of the spaceport also reflected the smaller volume of passenger traffic this relatively new world generated.

Kelly imagined that, as the planet continued to progress, the traffic would increase and services would follow.

Kelly made his way through medical screening.

His Fleet medical records showed him to be in excellent health and with all his vaccinations up to date.

The bored medtech barely looked up from his screen at him, before he thumbed his approval for planet entry into Kelly’s pocket terminal.

When the customs official saw all Kelly had was his carry-on baggage, he looked at his uniform and thumbed him through.

Passport control took a little longer because the agent found Kelly interesting and took some time to flirt with him before he passed him through.

His uniform gave him no special privileges here on the civilian side of Armstrong.

Life for Me Ain't Been No Crystal Stair by Susan Sheehan
Heritage by Rebecca Walton
American Legend: The Real-Life Adventures of David Crockett by Buddy Levy
Quest for Lost Heroes by David Gemmell
The Goldfish Bowl by Laurence Gough
Seventeen Ultimate Guide to Guys by Ann Shoket
Going All the Way by Dan Wakefield
Girl in the Moonlight by Charles Dubow
Darkness Unbound by Zoe Forward
Conard County Spy by Rachel Lee
Our partner