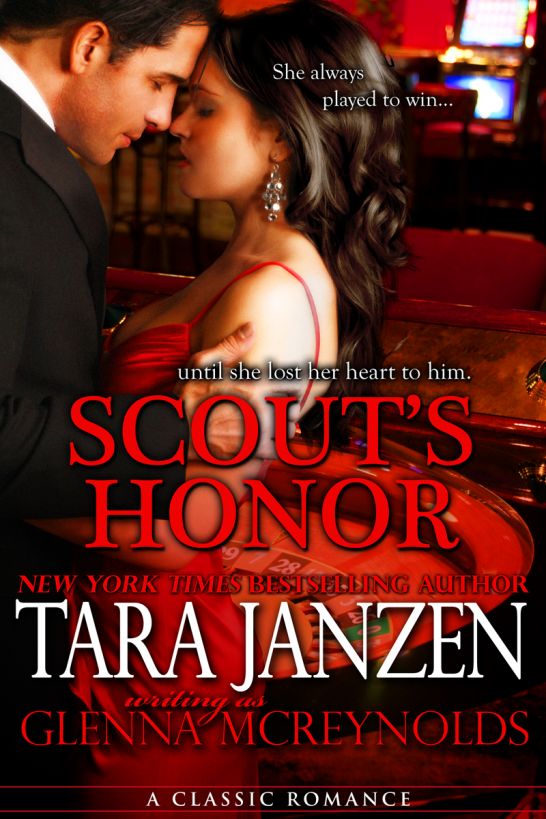 All rights reserved. No part of this book may
be reproduced or transmitted in any form or by any means,
electronic or mechanical, without permission in writing from the
author.

This book is a work of fiction. Names,
characters, places and incidents are either products of the
author’s imagination or used fictitiously. Any resemblance to
actual events, locales, or persons, living or dead, is entirely
coincidental.

Welcome to the Tara Janzen line of Classic
Romances!
New York Times
Bestselling
author, Tara Janzen, is the creator of the lightning-fast paced and
super sexy CRAZY HOT and CRAZY COOL Steele Street series of
romantic suspense novels.  But before she fell in love with
the hot cars, bad boys, big guns, and wild women of Steele Street,
she wrote steamy romances for the Loveswept line under the name
Glenna McReynolds.  All thirteen of these much-loved classic
romances are now available as eBooks.

Writing as both Glenna McReynolds and Tara
Janzen, this national bestselling author has won numerous awards
for her work, including a RITA from Romance Writers of America, and
nine 4 ½ TOP PICKS from
Romantic Times
magazine.  Two of her books are on the
Romantic
Times
ALL-TIME FAVORITES list – RIVER OF EDEN, and SHAMELESS.
LOOSE AND EASY, a Steele Street novel, is one of Amazon’s TOP TEN
ROMANCES for 2008.

She is also the author of an epic medieval
fantasy trilogy, THE CHALICE AND THE BLADE, DREAM STONE, and PRINCE
OF TIME.

Thieves In The Night

A Piece of Heaven

The Dragon and the Dove

The Chalice and the Blade

River of Eden
– “One of
THE most breathtaking and phenomenal adventure tales to come along
in years!  Glenna McReynolds has created an instant adventure
classic.” Romantic Times – 2002 BEST ROMANTIC SUSPENSE AWARD
WINNER

Steele Street Series
– “Hang on to
your seat for the ride of your life . . . thrilling . . .
sexy.  Tara Janzen has outdone herself.” Fresh Fiction

“Bad boys are hot, and they don’t come any
hotter than the Steele Street gang.”
Romantic Times

SEAL Of My Dreams
Anthology

All proceeds from the sale of SEAL Of My
Dreams are pledged to Veterans Research Corporation, a non-profit
foundation supporting veterans medical research.

Anna Lange sat at the bar and let her gaze
roam over the lush interior of Runner’s Cay Casino. She checked the
room for familiar faces, but found few, because Nassau’s season
didn’t start until December and December was two months away. Her
chances of getting together a private poker game for the weekend
were looking slim.

“Your drink, Ms. Lange,” the bartender said,
delivering a crystal flute of champagne.

“Thank you,” Anna said with a smile. She
pulled a five-dollar chip out of her beaded clutch bag and laid it
on the bar for a tip. “What time is it?”

“Thank you.” She was right on time. St. John
should be here.

Anna picked up her glass and turned back to
the casino, this time ignoring the gamblers and looking for one
special face. She didn’t know the stranger’s name, but she had a
feeling he knew hers.

She’d first noticed the man two nights ago
in San Francisco. It would have been hard not to notice someone who
was watching you with such unconcealed intensity. Especially when
that someone stood out like an innocent abroad amidst the
international clientele of Mr. Wong’s private gambling club. The
stranger had kept his distance, smiling each time he caught her eye
but never approaching her. She had assumed he was a shy pursuer of
her affections and, surprisingly, had found herself wishing he had
more courage.

When he failed to introduce himself she had
dismissed him, until he’d shown up last night on the opposite side
of the Runner’s Cay baccarat table, over three thousand miles from
where she’d seen him the night before. Within minutes of watching
him play she had known he wasn’t a gambler. He seemed more
interested in smiling at her than watching his cards. Anna played
the odds—that was her life—and she would have taken all bets
against his arrival in Nassau being a coincidence.

Rather than being unnerved by the man
following her, she had methodically run down a list of possible
reasons of why he would do so. An admirer would have approached her
in San Francisco. She didn’t believe her father would have stooped
so low as to have her followed by a private detective, although she
couldn’t completely discount the idea. That left the most logical
conclusion: He was a reporter looking to dig up old gossip.

Anna sipped her champagne and searched the
casino again. A slow smile curved her lips as she spotted her
stranger walking toward her. She had wondered how long it would
take for him to get his courage up.

Dusk had stolen over the Bahamian island
like a soft rainbow of muted color. It backlighted the lanky
masculine figure, but she knew it was the guy who’d been following
her
.
If he was a reporter, he was in for the coldest shoulder he’d ever
gotten. All she wanted was his name. St. John would check him out
and then she’d get to the bottom of his game.

“San Francisco get too hot to handle?” she
asked as he neared her, acknowledging his approach by taking the
advantage of the opening gambit. Her subtle allusion to the
illegality of their Chinatown game was another move calculated to
put him in his place.

“It was hot for a while,” he admitted,
grinning crookedly, “but there was a noticeable cooling after you
left. Do you always clean a place out, Ms. Lange?” His easily
placed western drawl confirmed her guess about his
nationality—American.

“Whenever possible, Mr. . . . ?” She caught
his gaze and felt a moment’s surprise. She hadn’t known anyone
could have eyes that soft, or that richly brown. They weren’t a
gambler’s eyes.

“Summers. Mitch Summers.” He moved in closer
and rested his elbow on the bar, then picked up her hand and lifted
it to his lips. He softly brushed his mouth across her knuckles and
sapphire ring while smiling into her eyes.

The only thing unusual about his action was
her response. The fact that she even had one caught her off guard.
In the split second it took her to register this new twist, he
turned her hand over and kissed her palm. His breath warmed her
skin, and the heat seemed to race up her arm, bringing a flush to
her cheeks.

She snatched her hand back, her eyes
widening in an unaccustomed loss of composure at his schoolboy
ploy. She made no pretense of avoiding his gaze, and actively
looked for an escape route away from the suddenly too-cozy corner
of the bar. Where was St. John?

She decided to try the direct approach,
hoping he’d step back far enough so that she wouldn’t have to push
by him. “Excuse me, Mr. Summers. I have an appointment to keep.”
The cool look she lowered at him was completely wasted, though. All
his attention was focused on the décolletage of her gown.

She couldn’t blame him. The dress was
designed to distract, its midnight-blue folds of shirred satin
molded to her figure like a second skin, the neckline cut to
reveal. But most people who traveled in her circle would hardly
look twice. Mitch Summers was on his fourth or fifth look by now.
She saw the question in his eyes—“What holds it up?”—and she wasn’t
about to satisfy his gauche curiosity.

“Excuse me,” she said with more force,
reaching out to push him aside lightly. Her hand encountered a wall
of resistance, a rock-hard chest that mere politeness wouldn’t
budge. The time for pleasantries had ended.

“Mr. Summers.” She paused and took a deep
breath, inadvertently increasing his fascination with her breasts.
“You have a choice. You can either step aside and let me pass . . .
or I can break your face.” She spoke very quietly, one winged brow
arched above her eye.

A slow, impish grin spread across his face
as he considered her words and let his gaze roam from her cleavage
up to her face.

“That’s a tough one, Miss Lange. Exactly how
badly are you going to hurt me?”

“Badly enough,” she replied. He was teasing
her, and she had to fight back a smile at his audacity. Suave and
debonair he was not.

“Could we talk about it over dinner?”

There was no reason to continue the
conversation now that she knew his name, but still she was becoming
mildly intrigued. He was out of his class, whether he realized it
or not. She’d noticed that at the baccarat table. He’d kept to the
minimum bet and played like a novice. Baccarat wasn’t a game of
judgment or skill, but most people played it with a finesse he had
lacked.

But he was cute.

Cute
? A puzzled frown
flashed across her face as she took another look at him. She hadn’t
described anyone as cute since she was sixteen. Must be his eyes,
she thought. They looked so guileless, so warm and inviting.
Definitely not the blank coldness she was used to encountering in
the casinos. Or maybe it was his face. He had a face that hid the
years, lean and outdoorsy, with a grin that went one way while his
nose tried not to go the other. His nose had been broken, and she
couldn’t help but wonder how. He didn’t look like a fighter. He
also didn’t look like a private detective. He lacked the worn-out,
world-weary countenance of a man who had seen too much of the seedy
side of life.

Still, there was something special in his
face and the way he held his body, something Anna instinctively
recognized: confidence, easy and masculine. She had faced false
confidence many times across a poker table, and she knew the real
thing when she saw it. This man knew who he was, knew he didn’t
belong here, and couldn’t have cared less.

Another smile flirted with her mouth. Mitch
Summers was intriguing, but she had all the information she needed.
She geared herself up for another, firmer brush-off, but before the
words were out of her mouth she felt a clammy hand slide up the the
bare skin of her back. In an instant she checked Mitch—one hand
around a highball glass, the other shoved in a pocket—and her head
snapped around.

“Hi, sweetheart,” Larry Walters, pit boss of
Runner’s Cay, drawled in her ear. “Glad to see you haven’t
forgotten us.” Her skin crawled where he touched her, and she
flinched, ever so slightly. Larry Walters made a habit of
overstepping his bounds, professionally and socially, and Anna
found him disgusting. He was so crude. She tried to back away, but
between Mitch and the bar she didn’t have anywhere to go.