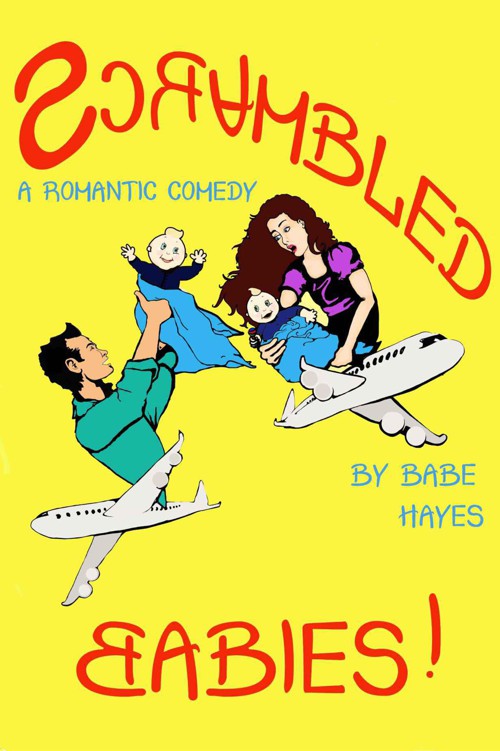 The story contained in this book is a work of fiction.  Characters, companies, organizations and agencies are either a product of the authors’ imagination or used fictitiously without any intent to describe their actual conduct/product.

For more information about the authors, visit:
nortonauthors.com

...That beautiful winged youth whom some call Cupid and others Love, against whose arrows there is no defense, neither in heaven nor on earth.

Their eyes met! Locked! She felt a brief twinge, as if something piercing but honeyed had entered her heart.

Magically, she rocketed into orbit with him.

They zoomed past fantasy moons and explored uncharted planets.

They were fireworks, their bodies exploding into a million fragrant flower petals.

She shuddered in ecstasy.

They mingled and melted and molded, drifting back to earth as a divine single being.

One of the wonderful mysteries of life!

Paeton McPhilomy was on a jet headed for Los Angeles with her two girls, six years and three months old. She had rushed to the restroom to change her little girl whose cry had sounded unfamiliar. She attributed the strangeness to being in a pressurized cabin thirty-thousand feet in the air. She had just pulled off the blanket covering her baby girl when she realized this infant wasn’t hers! The amazing thing was that to a stranger, this baby could have passed as hers. They could be twins to unfamiliar eyes. When Paeton opened the diaper, another big shock—Paeton beheld
male
genitalia!
Her
baby was a
girl!
A jarring cry escaped her lips.  The infant’s wide eyes popped wider in response.

She stood still, her every muscle holding its breath, hovering over the baby in the first-class restroom of the cruising jetliner.

She blinked several times.  Nothing changed.

Paeton was cruising at thirty-thousand feet about to change the diaper of a baby who
wasn’t hers!

Knock, knock!  Someone was tapping on the restroom door.  Paeton’s stomach lurched.  “Who—who is it?”

“This is your flight attendant.  I thought I heard a cry.  Are you all right?  Is there anything I can do?”

Paeton, trembling, clung to the closed toilet lid, struggling to make speech come.  “No.  No, thank you. I, uh, just, uh, just poked myself.  Everything’s fine,” she lied.

“Okay.  I’m right outside if you need any help.”

“Thank you,” Paeton tried to keep her voice from wavering.  She felt as if her brain had been given a shot of pain-killer.  She stared at the boy baby through watery eyes.  She bit her lip
.  Where is Kelsey?  Is she safe?  Should I call the police? What should I—?

Yes!  That’s it!
This time the image came clearly into focus—it
was
definitely at the airport!
Yes!  Thank god!  John F. Kennedy International!
Her confidence was building.
Of course.  That guy I bumped into in the three-piece silk suit.  We mixed up our babies at the airport!
She remembered noticing that he held a Bloomingdale’s childseat and blanket with tiny animals on it—
identical to hers!
—as she approached him boarding her plane for L.A.  She also remembered thinking his vest was too tight.

Yes, that’s how it happened.  Those unruly children knocked me into too-tight-vest, and we scrambled the babies
.

Oh, thank you, god!
She was now able to re-create the entire incident.  Those children, chasing around, knocked her into him.  He was wearing an Armani silk suit—with the vest too tight.  She managed to set Kelsey’s travelseat down before reaching out and catching too-tight-vest’s arm to keep her balance. He had also set his childseat down to catch Paeton.

Gradually, surely, she could feel her pulse beating more normally, her breath coming easier.  Her arms began to tingle, a sign they were regaining sensation.

The simple explanation for this bizarre occurrence was that each party to the collision had picked up the wrong, yet identical, travelseat in the confusion.

But when the rest of her body tingled in response to what she knew was
also
significant in causing the scrambled babies, she felt her face grow hot.

When she lost her balance, set Kelsey down, and grabbed too-tight-vest’s arm, she saw stars!  But it wasn’t the impact of hitting him that made them come out.  It was the peering directly into his eyes—the demon eyes of too-tight-vest!  As the two lingered in their gaze, she remembered a brief twinge, followed by a feeling of sensuous honey spreading throughout her body.  She remembered a sweet taste in her mouth.  She had quivered uncontrollably.  Had he noticed?  No, he couldn’t have—his eyes were riveted to hers as well.

She had not felt that delicious in that many places in years—maybe ever.  Simultaneously, she felt a twinge of guilt.  Kevin had been dead only seven months.

Nevertheless, knowing the cause of her extraordinary discovery offered immediate comfort.  She was now quite certain that both children were safe.  Nonetheless, Paeton and too-tight-vest were still left with the undoing of the clumsy and embarrassing error
. Without media coverage!
Paeton hoped. She didn’t know how the public would look upon the fact that the babies’ faces were covered. Would the masses even believe that fact in the first place?

The thought of the nation finding out that she boarded a jet with the wrong child, even though both babies had been completely covered under the Zoo Kingdom blankets, gave her a queasy stomach.  The restroom disinfectant odor intensified her nausea.

She stood up and viewed the male infant who was looking up at a strange person.  She managed a tender laugh, in spite of her emotional chaos, seeing his helpless exposure to the elements, his patient waiting for a new diaper.

She decided she could do something positive by finishing changing the foreign, yet entirely familiar, baby.  She pictured Kelsey.  Not only were their travelseats and matching blankets identical, but also, except for their gender, the two babies could have been identical twins!  She shivered slightly viewing the uncanny resemblance.
Aiiii!
A terrifying thought struck her—
the striking resemblance of the babies would cause the public to believe she didn’t recognize her own child!
If only the baby had been overtly different—black or Hispanic or a bright redhead! But the amazing resemblance would make her story of Kelsey’s face being covered by the blanket appear a weak excuse for the mix-up. The public would believe that neither she nor too-tight-vest had known their own babies! She felt as though she had just been punched in the stomach!

Was she in trouble? Was this a huge problem, or simply an honest mix-up? What would people believe?  That was the blazing question.

Now it was clear why she had sensed a difference in the baby’s cry when the child needed changing.  She had attributed her response to the effect of the altitude on her ears or to the stress of the day, taking both daughters to Los Angeles for her first screenwriting job. But the real reason was it wasn’t Kelsey!

The good news was she had a clearer picture of her dilemma.  The bad news was the logical explanation for the baby-switch did not in any way diminish her frustration about the situation and her anger at herself.  Another sound erupted through her clenched teeth.  The little boy did start to cry.

Rescued by a Duke by Ruth J. Hartman
Scary Creek by Thomas Cater
Love in a Bottle by Antal Szerb
Possess by J.A. Howell
Cuffed by James Murray
The Pursuit of Alice Thrift by Elinor Lipman
The Devil's Acolyte (2002) by Jecks, Michael
Code Blue by Richard L. Mabry
Welcome to Dog Beach by Lisa Greenwald
The Tainted City by Courtney Schafer
Our partner