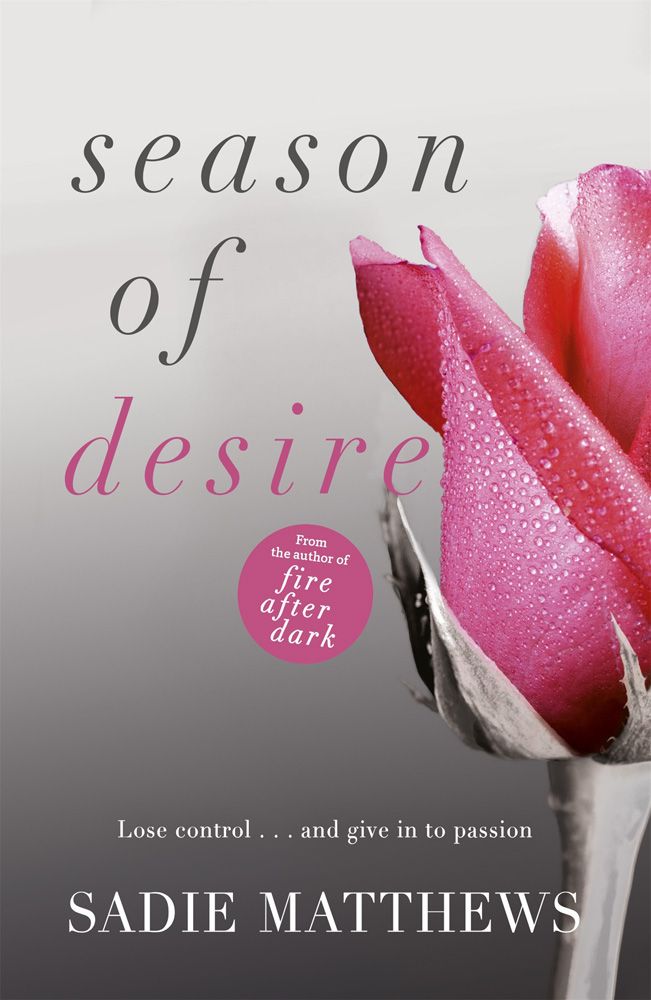 The After Dark Series

Sadie Matthews is the author of six novels of contemporary women’s fiction published under other names. In her own work, she has described decadent worlds of heady escapism and high drama. The After Dark series was her first provocative romantic trilogy, exploring a more intimate and intense side of life and relationships. She is married and lives in London.

Work has been asserted by her in accordance with the

reproduced, stored in a retrieval system, or transmitted, in any

publisher, nor be otherwise circulated in any form of binding or

All characters in this publication are fictitious and any

resemblance to real persons, living or dead is purely coincidental.

I storm out of the study, slamming the door behind me. My father’s voice follows me – ‘Freya, stop it, come back!’ – before the heavy oak door cuts off the sound.

‘Goddammit!’ I exclaim, frustration and anger bubbling around inside me. I would say something a lot worse if it wasn’t for the maid who is dusting the enormous gold lamps that sit on the console tables in the hall. She looks up at me, apprehensive, as though she’s worried I’m going to throw something in my fury. I look her straight in the eye and say loudly, ‘I’m not a baby!’

‘No, miss,’ she agrees swiftly, and goes back to polishing the lamp.

I feel momentarily ashamed for involving her in my family troubles – she’s not paid enough to put up with that – and try to calm down a little. I sigh and head down the dimly lit corridor to my suite of rooms. I don’t like this place. My father had it built a couple of years ago – he has a ceaseless passion for creating and acquiring homes – and I’ve never warmed to it. We used to have a cosy chalet on the outskirts of St Moritz, an old-fashioned, charming place that I adored. But my father decided that it wasn’t new or different enough, and soon there were six different architects working on plans for something really special. It took years to complete but at last my father has what he’s always wanted: a super high-tech and ultra-modern mountain eyrie, like something out of a Bond movie – except, of course, it’s exactly the sort of place where the villain would live, though I’ve never pointed this out to him.

In fact, in some ways I’m as frightened of my father as I used to be of those sneering bald evil-doers who always decided to kill Bond in a slow, inventive way, giving him plenty of time to escape. My father is, after all, known all over the world, having built his fortune in airport construction, and then branched out into shipping to create a vast empire that means our family name – Hammond – has become synonymous with buckets of cash. And you don’t become a success like that without being ruthless. Then there’s my father’s controlling streak. He has no intention of letting me or my sisters grow up and he keeps a beady eye on me wherever I am in the world. I might seem to have an enviable life, but the truth is that I’m never really free, even when I’m away from him.

I open the door of my rooms, stalk inside and slam it shut behind me. My bags are sitting in the middle of the room, packed as per my instructions. I know that inside each layer of clothes has been separated by sheets of fine, acid-free tissue paper. My shoes have been stuffed with more tissue and placed reverently in their soft cotton bags. Jewellery – I only travel with a few simple pieces unless there’s a really big party in the offing – is locked into my Asprey’s case, and the key is kept cunningly hanging from my charm bracelet.

I gaze at my bags and say loudly, ‘Damn it all to hell!’

‘What’s the problem?’ says a cool voice behind me.

I turn to see my sister Summer standing in the doorway. She’s technically the youngest of us because even though she and Flora are twins, she arrived second, and I think she’s the prettiest too, with her fair hair, willowy figure and the winsome gap between her front teeth. But, in my opinion, she’s also the most spoiled, a daddy’s girl if ever there was one.

‘Oh right.’ Summer saunters into the room. She is the epitome of mountain chic in a cream cashmere polo neck and dark ski leggings worn with leopard print ballet flats, her glossy blonde hair spilling over her shoulders. ‘Going somewhere nice?’

I grit my teeth. I’m not in the mood for Summer right now. And why the hell is she in my rooms? Isn’t there enough space in this crazy glass and steel construction for her to steer clear of me? ‘LA,’ I say briefly. ‘To stay with Jimmy.’

‘Uh huh.’ She nods. She gets this. We all love Jimmy. He was our polo coach when we were in the States and one of the most beautiful men we’d ever seen, knocking spots off movie stars and models. Just remembering how he looked as he played a chukka makes me happy: he was tanned, his dark hair windswept, a pony between his muscled thighs, a mallet swinging as his biceps bulged, and beads of sweat on his perfect nose. We all loved him madly but Flora, the older of my twin sisters, loved him most. She truly believed they would get married. When Jimmy announced he was gay and moved to LA to become an actor, no one was surprised, apart from Flora. When she heard the news, she dropped to the ground in a dead faint. It was all very dramatic, which is par for the course with Flora.

‘Give Jimmy my love,’ Summer says, approaching my luggage. A scarlet wool shawl embroidered with black skulls is draped over the largest case. She picks it up. ‘This is nice.’

She throws me a look. ‘Keep your hair on, I’m only asking. Honestly, Freya, what’s with you? You’re so touchy!’ She narrows those blue eyes of hers. ‘Have you had a row with Dad?’

‘What do you think?’ I snap back. Rows between Dad and me are pretty much the norm these days.

‘What about this time?’ I can practically hear the eye roll, even though Summer has turned back to inspect my luggage again. It’s all right for her. She and Dad are still in perfect harmony, just like I used to be – before I dared to want some independence for myself.

‘None of your business.’

‘Something to do with Estella?’

‘None of your business!’ I repeat. I am seriously annoyed now. Just the mention of Estella’s name is enough to ratchet my anger levels up a few notches. ‘Now, I’m leaving, okay? So get out of my room, go back to your own.’

Summer shrugs and heads slowly back towards the door. I feel bad suddenly. She’s pretty young after all, only twenty-one. And maybe she’s lonely, just like I am, locked away up here on the side of a mountain. We have everything we could possibly want in this place – as long as what we want can be bought.

I swoop up my scarlet scarf and wrap it around my shoulders as I stride over to catch up with her. ‘Wait – you can walk with me to the elevator if you want.’

She flashes me a smile and I get a glimpse of that cute gap between her teeth. Dad always wanted her to wear braces and she refused, and now I can see why. It gives her good looks a special something. Character, I suppose.

‘How long will you be gone?’ she asks, as we head out of my suite and start walking along the quiet, grey-carpeted corridor towards the lift. This place is always quiet and dark – because it’s built into rock, I guess. Half the house is concealed deep in the mountain. The other half defies gravity as it juts out over the mountainside, with spectacular views of the Alpine valleys and peaks, the glass walls and floors giving a dizzying perspective. I always feel a little safer in the back of the house, knowing that I can’t possibly plummet through the solid rock around me.

‘Not long,’ I reply. ‘But I don’t think I’ll come back here. The weather is seriously depressing.’

Summer nods. ‘It snowed all night. They say it’s getting worse.’ She frowns. ‘Are you sure you’ll be able to fly today?’

‘Of course. It’s not that bad. It has to be pretty deep before they ground the flights, and it’s not even snowing now. I’m sure they’ll have cleared the runway.’

‘Where will you go after LA?’

I look at her sympathetically. She’s only a kid, really. She needs me, I remind myself. Ever since Mother died, she’s looked to me for guidance, which I never felt qualified to give, considering how lost and helpless I felt myself, but I guess it’s my duty now. Despite her closeness to Flora, Summer still seems to need the support of someone older, perhaps because she and Flora are often apart. At least she’s not looking to Estella – I have to be grateful for small mercies. ‘Maybe I will. Keep in touch. Tell me where you’re going. Send me an email when you know.’