Read Seat Of The Soul Online

Seat Of The Soul 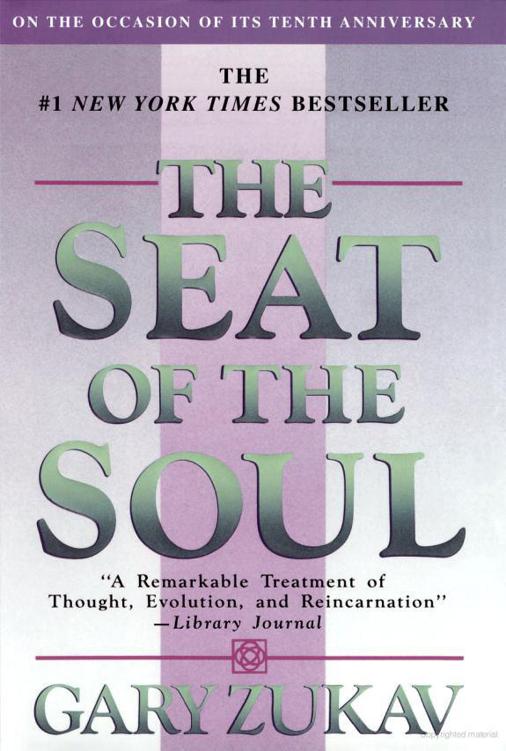 THE SEAT OF THE SOUL

During the years that I was writing The Dancing Wu Li Masters and after, I was drawn again and again to the writings of William James, Carl Jung, Benjamin Lee Whorf, Niels Bohr and Albert Einstein. I returned to them repeatedly. I found in them something special, although it was not until later that I was able to understand that special ness: these fellow humans reached for something greater than they were able to express directly through their work. They saw more than they could express in the language of psychology or linguistics or physics, and they sought to share what they saw. It is what they sought to share through the medium of their work that drew me to them.

They were mystics. That is my word. They would not use such language, but they knew it. They feared that their careers might become contaminated by association with those who did not work within the scientific model, but in the depths of their own thoughts they each saw much too much to be limited by the five senses, and they were not. Their works contribute not only to the evolution of psychology, linguistics and physics, but also to the evolution of those who read them. They have the capability to change those who touch them in ways that also cannot be expressed directly in the terms of psychology, or linguistics, or physics.

As I came to understand, in retrospect, the magnetic quality that these works held for me, I came to understand that what motivated these men was not Earthly prizes or the respect of colleagues, but that they put their souls and minds on something and reached the extraordinary place where the mind could no longer produce data of the type that they wanted, and they were in the territory of inspiration where their intuitions accelerated and they knew that there was something more than the realm of time and space and matter, something more than physical life. They knew it. They could not necessarily articulate this clearly because they were not equipped to talk about such things, but they felt it and their writings reflected it.

In other words, I came to understand that what motivated these men, and many others, was in fact something of great vision that comes from beyond the personality. Each of us is now being drawn, in one way or another, to that same great vision. It is more than a vision. It is an emerging force. It is the next step in our evolutionary journey. Humanity, the human species, is longing now to touch that force, to shed that which interferes with clear contact. Much of the difficulty in doing this lies in the fact that the vocabulary with which to address this new force, which is indeed the eternal force, is not yet born.

In this moment and in this hour of human evolution this proper vocabulary and means of addressing that which longs to transcend religiosity and spirituality and assume the position of authentic power is longing to be born. We need to give that which we as a species are now touching consciously for the first time a vocabulary that is not clouded so that it can be identified clearly in the acts and judgments of the human race, so that it can be seen clearly, and not through veils of mystery or mysticism, but simply as the authentic power that moves the force fields of this Earth of ours. I hope that this book will assist.

As a way of talking about what we are and what we are becoming, I have used the terms fivesensory and multisensory. Multisensory is not better than fivesensory. It is simply more appropriate now. As one system of human experience winds down and another, more advanced system emerges the older system may appear by comparison to be lacking, but from the perspective of the Universe, the language of comparison is not the language of lesser and better, but of limitation and opportunity.

The experiences of the multisensory human are less limited provide more opportunities for growth and development and more opportunities to avoid unnecessary difficulties. I have contrasted the experiences of the fivesensory human with the experiences of the multisensory human in each instance to make their differences as clear as possible, but this does not mean that the fivesensory phase of our evolution, the phase from which we are emerging, is negative in comparison to the phase of our evolution that we are entering, the multisensory phase. It is simply that it is now no longer appropriate just as there came a time when the use of candles became inappropriate because of electricity, but the advent of electricity did not make candle power negative.

We are in a time of deep change. We will move through this change more easily if we are able to see the road upon which we are traveling, our destination, and what it is that is in motion. I offer what is in this book as a window through which I have come to see life. I offer this window to you, but I do not say that it is necessary that you accept it. There are so many ways to wisdom and to the heart. This is our greatest richness, and the one that gives me the most joy. We have much to do together. Let us do it in wisdom and love and joy. Let us make this the human experience.

We have long known that this definition of evolution is inadequate, but we have not known why. When two humans engage one another, they are, in terms of organizational complexity, equally evolved. If both have the same intelligence, yet one is small-minded, mean and selfish while the other is magnanimous and altruistic, we say that the one who is magnanimous and altruistic is the more evolved. If one human intentionally sacrifices his or her life to save another, by, for example, using his or her own body to shield another from an unseen bullet or a speeding car, we say that the human who sacrificed his or her life, indeed, was one of the most evolved among us. We know these things to be true, but they are at variance with our understanding of evolution.

Jesus, we are told, foresaw the plot against His life, even to the details of how His friends would act and react, yet He did not run from what He saw. The entirety of human kind has been inexorably shaped by the power and love of One who gave His life for others. All who revere Him, and almost all who but know His story, agree that He was one of the most evolved of our species.

Our current understanding of evolution results from the fact that we have evolved until now by exploring physical reality with our five senses. We have been, until now, fivesensory human beings. This path of evolution has allowed us to see the basic principles of the Universe in concrete ways. We see through our five senses that every action is a cause that has an effect, and that every effect has a cause. We see the results of our intentions. We see that rage kills: it takes away breath-the Life force-and it sills blood-the carrier o f vitality. We see that kindness nurtures. We see and feel the effects of a snarl and a smile.

The power to control the environment, and those within it, is power over what can be felt, smelled, tasted, heard or seen. This type of power is external power. External power can be acquired or lost, as in the stock market or an election. It can be bought or stolen, transferred or inherited. It is thought of as something that can be gotten from someone else, or somewhere else. One person’s gain of external power is perceived as another person’s loss. The result of seeing power as external is violence and destruction. All of our institutions-social, economic and political-reflect our understanding of power as external.

Families, like cultures, are patriarchal or matriarchal. One person “wears the pants.” Children learn this early, and it shapes their lives.

Police departments, like the military, are produced by the perception of power as external. Badge, boots, rank, radio, uniform, weapons, and armor are symbols of fear. Those who wear them are fearful. They fear to engage the world without defenses. Those who encounter these sym

The need for physical dominance produces a type of competition that affects every aspect of our lives. It affects relationships between lovers and between superpowers, symbols are fearful. They fear the power that these symbols represent, or they fear those whom they expect this power to contain, or they fear both. The police and the military, like patriarchal and matriarchal families and cultures, are not origins of the perception of power as external. They are reflections of the way that we, as a species and as individuals, have come to view power.

Havana Bay by Martin Cruz Smith
A Murder of Mages by Marshall Ryan Maresca
Day of the Assassins by Johnny O'Brien
Moo by Sharon Creech
Stan Musial by George Vecsey
Dream On (Stories of Serendipity #2) by Anne Conley
Hitler's Forgotten Children by Ingrid Von Oelhafen
Make Me Stay by Ella Jade
Tori's Seduction by Willow Ward
Destiny of the Light: Shadow Through Time 1 by Louise Cusack
Our partner