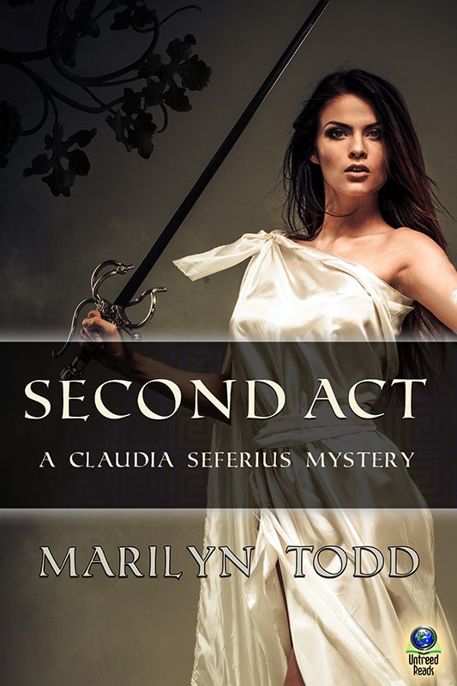 To Janet Hutchings, whose support is beyond price.

This ebook is licensed for your personal enjoyment only. No part of this book may be reproduced in any form or by any electronic or mechanical means, including information storage and retrieval systems, without written permission from the publisher or author, except in the case of a reviewer, who may quote brief passages embodied in critical articles or in a review. If you would like to share this book with another person, please purchase an additional copy for each person you share it with. If you’re reading this book and did not purchase it, or it was not purchased for your use only, then please return to your ebook retailer and purchase your own copy. Thank you for respecting the hard work of this author.

To Janet Hutchings, whose support is beyond price.

‘Claudia—a super-bitch who keeps us all on the edge where she loves to live… The Roman detail is deft, the pace as fast as a champion gladiator.’
Sunday Express

‘A timeless heroine for today—you’ll be hooked.’
Company

‘An endearing adventuress who regards mortal danger as just another bawdy challenge.’
She

‘Claudia lives life at the cutting edge, and has a way with the sword to prove it.’
Newcastle Upon Tyne Evening Chronicle

‘If you’re looking for a romp through the streets of Rome in 13BC then this is the book to buy!’
Books Magazine

‘As juiciest as the ripest grape, this is a vintage romp to savour.’
Northern Echo

Autumn had transformed the Alban Hills into a patchwork of
colour
ranging from dull rusts to flame,
sulphur
yellows to amber.

The air was warm.

But the air was misleading.

Soon, frosts would arrive to desiccate the woodlands and kill off the food supply. The creatures of the forest had to move fast. Squirrels busily hoarded their caches of acorns and seeds. Dormice, fat as barrels on hazelnuts, ferried grass to their winter nests and badgers, having gorged on elderberries, concentrated on building up their body fat with plump, juicy earthworms. The woods were virtually silent. Birds were using every ounce of energy to feed, not to sing, and the only sound which echoed across the valley was the measured dig-dig-dig of a spade as it turned over the heavy, black soil.

Stripped to the waist, the Digger leaned on the shovel to mop up the sweat with a piece of coarse
woollen
cloth. A pheasant clucked in the distance and a viper slithered through the leaf litter, tasting with its tongue air rank with the urine of rutting fallow bucks. The Digger unstoppered the goatskin and drank deeply, watching a proliferation of painted lady butterflies on their colourful migration south. There was no wine in the skin. That had been emptied out, to be refilled with water from the little stream that babbled close by. The water was cool. Refreshing the Digger before the blade once more sliced through the soil.

Gradually, the black, aromatic earth piled up. From time to time, there would come the faint clop of ox hooves, the slow and steady rumble of wagon wheels, the whinny of a mule. Reminders that the highway ran by less than a hundred paces up the bank and that Frascati itself lay only half a dozen miles to the west. Lying at the crossroads of three main routes out of Rome, and with its wealth of patrician villas, post houses and taverns, the little town made for a popular stopover.

Finally, back aching, head pounding, the Digger tossed the spade to one side. Enough, the humid air decreed. Enough, enough, enough.

With the gentlest of nudges, the naked corpse rolled tidily into the hole.

As graves go, it was shallow in the extreme. But the Digger was unused to manual labour, and the leaves would fall soon, then the snow. It was unlikely the body would be found before spring. By then, it wouldn’t matter.

The Digger’s gaze ranged over the cadaver’s belongings. Heaven knows, there wasn’t much. A couple of tunics which had seen better days, a few personal items such as comb, faded cloak, the wineskin which the Digger had emptied. But there, at the bottom of the pack and carefully wrapped between layers of brown felt, nestled a trio of theatrical masks.

All three had been delicately carved of wood and had a wig attached. One mask had its gaping mouth curved upwards in an exaggerated smile, for comic parts. The mouth of the second was turned down for tragedy. The third, painted white and with its fair hair curled into ringlets and pinned, was for when the actor played female roles. Admiring the workmanship, the elaborate brush strokes, the sturdy ribbons by which the masks fastened behind the actor’s ears, the Digger prepared to toss them in after the corpse.

Back in Frascati, a company of strolling players had been hiring. Convinced they could do better alone, certain members of the troupe had broken away to form a rival splinter group, leaving the original company in the lurch. With Saturnalia but two months away, a lucrative time for strolling players, the diehards of the original group were desperate to take on new artists and train any amateurs willing to roll up their sleeves and pitch in.

Why not, the Digger wondered.

It wasn
’
t as though it was
such
a transition.

Aren’t all killers actors at heart—?

Six weeks later and the tramontana, that vicious desiccating wind that sweeps down from the mountains in the north, arrived in Rome with a vengeance. Leaves which had managed to withstand autumn storms and early frosts now scattered like chaff in the wind. The soil, as with a defenceless crowd of peasants facing mounted Persian hordes, shrivelled and receded beneath the icy blast.

‘Makes you think about those Briton barbarians,’ Claudia said to her bodyguard, as they pushed their way through the crowds. ‘I mean, what kind of people find blue skin attractive?’

There had been no question of travelling by litter today. Snug as she would have been beneath a pile of bear skins with heated bricks at her feet, the chair would never have got through. Half the universe descended on Rome for Saturnalia. A crush of handcarts and donkeys, despatch riders and pedestrians, soldiers and slaves clogged every road. Traders and students jostled shoulder to thickly cloaked shoulder with athletes and letter carriers in a kaleidoscope of colour and customs. Dark-skinned Abyssinians, pantalooned Dacians, Cretans with their thickly oiled curls swarmed in on everything from camels to stilts, bringing with them the scents of the Orient, new breeds of sheep, panther claws, pepper, silver-coated drinking horns, turbans, marmots and liquor.

They came armed with stories, as well. Of ants that mine gold in the Indus. Of virgins auctioned off in Illyria. Of headhunting Gauls and Teutonic warriors sending their sons tobogganing down snow-covered slopes on their fathers’ bronze shields.

All these things congested the streets, filling the air with laughter and awe, while prisoners of war rattled their chains and sang songs of defiance in incomprehensible tongues and children rode piggyback on their fathers’ shoulders, squealing, tugging, dripping pastry crumbs as they passed. Wrestling her way through beneath the Capitol, Claudia noticed that not even weather as cold and drab as this could dull the gold on Jupiter’s chariot on the apex of his temple. But the sun, what little of it percolated the grey, leaden clouds, was sinking faster than she would have liked.

She was already late.

Crossing the vegetable market, finished for the day, empty-eyed beggars pressed together for warmth against the walls of the warehouse. Cripples in rags moaned with the pain. For a fleeting moment, she faltered and the past rushed up to meet her. Suddenly, she, too, was smelling the vile stench of poverty, feeling the icy cold hand of despair grip her shoulder… Then pfft! The moment was gone. She was back in the open plaza, the twenty-five-year-old widow of a wealthy wine merchant on her way to an urgent appointment.

The flower market afforded little variety in midwinter and for the most part stallholders displayed identical wares. Early white Cretan crocus feathered with amethyst, black-eyed anemones forced under glass (and which were already wilting in the freezing air) or pots of late Damascan crocuses, although one booth offered iris, narcissus and the white bells of snowflake for a vastly inflated price, gambling on wealthy womenfolk paying through the nose for exotic, unseasonable blooms. Nevertheless, the bulk of today’s trade was in greenery, and trade was brisk. With Saturnalia just one week away, Roman matrons were out in force, sniffing out the best of the bargains in fir, yew, holly and myrtle to deck out their apartments or hang in their halls.

Claudia glanced around. Pretended to peruse the foliage displays. Curled one booted foot round the leg of a collapsible stand. With a crash, the table pitched forward on to the cobbles, spraying evergreens in every direction.

‘Junius.’ She extracted a prickly holly leaf from the hem of her gown and snapped her fingers. ‘Help this poor woman with her table, will you?’

‘Must be the cold,’ the stallholder muttered, gathering up armfuls of fragrant fir before they were trampled. ‘Got into the hinges, I’ll wager.’

She was extremely grateful to the young noblewoman for lending her a strong arm to help.

While Junius rushed to lift the collapsed stand, Claudia slipped away. In theory, of course, she should have been able to order her slave to stand guard while she kept her appointment, but theory had no place with the young Gaul. Closer than her own shadow, orders meant nothing when it came to protecting his mistress. Guile was the only solution.

Daylight was fading fast, and the smell of the Tiber was sour in Claudia’s nostrils as she negotiated her way through the maze of twisty lanes. The din of commerce receded with her every footstep. With the seas closed from October until March, the only traffic on the river in December came from local barges and the occasional coaster. The docks were deserted and Claudia’s boots echoed over the quayside.