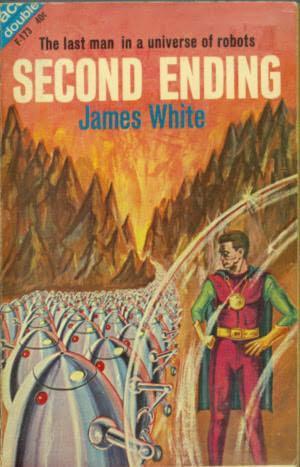 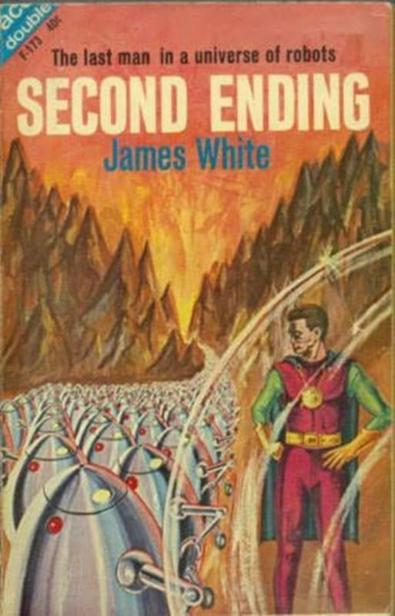 End of the ebook.

"Second Ending" is one of my own favorite stories, and not just because it was voted onto the short list of five novels for the 1963 Hugo award (Heinlein's
Stranger in a Strange Land,
a much longer, and better, story, won it that year). So strongly did I feel about the story that when it was submitted to my favorite editor and he requested a few changes — including a reduction in length to twenty thousand words and the introduction of a surviving island of humanity! — I demurred. It was the only time in my writing career that I said "No" to an editor in such forthright language. After close on a quarter of a century in the game, I have now learned how to make all my "No's" sound like "Well, maybe's."

Returning to the original question, "Where on Earth do you get those crazy ideas from?", it seems that in my case they come from unfulfilled ambitions, feelings of injustice, meeting a bedraggled dog or a beautiful girl, or from a friend with polluted pants. But the simple answer is that all of the ideas have a solidly terrestrial origin, and so the question answers itself.

For Ross, the process of awakening was a slow thaw. Gradually there was growing within his mind a spot of warmth, melting and clearing the long-unused channels of memory and perception. For a time he knew only that he was somebody and that it was very cold, and then he began to remember other cold awakenings and the nightmares which followed them. He tried to tell himself that this was all wrong, that nightmares preceded awakening and not the other way around, but his memory insisted otherwise. It insisted so strongly that, had such a reaction been physically possible, Ross would have broken into a sweat of fear. Eventually sound and vision came to him, the icy fog of Deep Sleep cleared and he saw Beethoven.

Someone had given Beethoven's hair a coat of black enamel, painted the face with a realistic flesh tint and touched in the eyes with blue, but it was still the same bust which had occupied a place of honor in Pellew's consulting room. That someone, Ross knew, was in for trouble, because Dr. Pellew was not a man who took kindly to practical jokes. All at once that line of thought became a very comforting one for Ross, because it opened up the possibility that the nightmares had been practical jokes also. He seemed to remember that there had been quite a few jokers in this place, especially on the thirty-first level. But why such a needlessly cruel trick, and why had they picked him? Who, exactly, were they? What was this place, what was he doing here, who was Pellew…?

Ross didn't know, exactly. His mental processes were quickening, but he was demanding answers from a memory which was still woefully incomplete. He sighed audibly, and suddenly Beethoven was talking to him.

Like a record with a faulty groove, the same words droned out over and over and over. Ross stuck it out for as long as he could, which was about six minutes; then he croaked, "Shut up, I believe you!"

The voice ceased. Ross became aware of a steadily mounting pressure at the back of his head and shoulders. Chest, neck and leg muscles cracked painfully, and he realized that his posture was altering. The padded surface on which he lay had broken in two places. It was swinging upward from a point below his waist and falling away at the level of his knees. He was being forced from a supine into a sitting position. The process was slow and was probably meant to be gentle. Ross would have yelled in sheer agony, if he had not known that filling his lungs for the yell would have expanded his chest muscles suddenly and added to the pain. Finally he was sitting upright, held by a strap around his middle. He felt the strap, because his eyes showed little more than drifting patches of blackness. Strain as he might to see more, for the moment the blackness continued to prevail. The voice began again:

"With long-term patients there will be psychological difficulties as well," the bust said through its motionless, painted lips. "He is awakening into an environment which is completely strange, and perhaps frightening, to him. Someone with an understanding of his background should be present, and the shock can be lessened by surrounding him with his more valuable personal possessions…"

Ross blinked until the black patches faded from sight. He was in a small room which contained, in addition to the contraption he was sitting in, a bed, some recessed cupboards and a floor which was neatly paved with what looked like foam-rubber mattresses. Close by was an instrument trolley containing the talking bust of Beethoven, three shiny cans and his wallet, opened to show the picture of Alice.

"Oh, for Heaven's sake!" Ross groaned, and reached out carefully for one of the food containers. This, he thought, was the most intricate and senseless joke he had ever heard of. He did not feel hungry, but doing what he was told seemed to be the only way of shutting off that maddening, repetitious voice.

The can warmed up as soon as he lifted it and the top flipped back, spilling some of the stuff onto his bare legs. He swore, sniffed, then began to wonder if perhaps he wasn't hungry after all. The stuff tasted every bit as good as it smelled, and it warmed him right down to his toes. But when he had emptied the can Beethoven continued to drone "Liquid meal liquid meal" at him. Presumably he was expected to empty all three.

The second can exploded in his face.

Several things happened at once. He jerked backward instinctively as the hot, foul-smelling liquid sprayed his face and chest. The sudden movement triggered off a cramp which nearly tied him in knots, and he began slipping toward the floor. The retaining strap took his weight for a moment; then it parted with a soft tearing sound and he collapsed onto the floor.

That drop of perhaps three feet onto a thickly padded surface brought a shock of pain worse than anything he had ever experienced. It also brought him finally and fully awake.

Up to now Ross had been treating everything which was happening as some sort of involved practical joke which was being played on him; he was both angered at the cruelty of it and relieved that he had not awakened to the nightmare of being crushed to death in a tubular metal cage which ticked. From his new position he could see a small extension speaker unit attached to the back of Beethoven's head, and a cable which ran from it across the floor and out through a hole in the wall. This could have been the sort of joke that his fellow students might have played on him — involving stink bombs, a talking bust and an edited playback of one of Pellew's lectures — but for one thing. The tape had led him to believe that he was cured. No one in the hospital would joke about that.

And if it wasn't a joke…

An Eye of the Fleet by Richard Woodman
Starseed by Gruder, Liz
Days With The Undead (Book 1) by Snow, Julianne
Never Say Spy by Henders, Diane
A Glimmer of Hope: A Novella Prequel to Isle of Hope by Julie Lessman
Zen and the Art of Motorcycle Maintenance by Robert M. Pirsig
Knight Protector (Knight Chronicles) by Rue Allyn
The Life and Opinions of Maf the Dog, and of His Friend Marilyn Monroe by Andrew O'Hagan
Star Wars: The Han Solo Trilogy I: The Paradise Snare by A.C. Crispin
Joining by Johanna Lindsey
Our partner