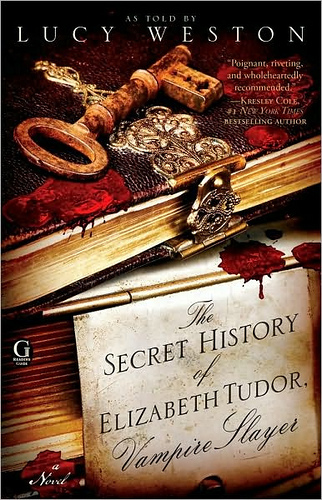 “A spellbinding book, at once lush and intensely compelling … passionately crafted. … I found
The Secret History of Elizabeth Tudor, Vampire Slayer
to be one among that rare breed of fictional works: the lavish page turner—a book of elegant prose that you can’t put down.”

“Get ready to know a shocking new side of the great Elizabeth I. Clever and surprising, Weston’s tale of this regal young queen sparkles with intrigue, unfolding in graceful layers to reveal a previously hidden history of timeless, supernatural love and well-buried secrets.”

“A fascinating blend of paranormal and historical, starring Elizabeth Tudor as a sixteenth-century kick-ass heroine—what a great concept!”

—Kate Emerson, award-winning author of the
Secrets of the Tudor Court
series

This title is also available as an eBook 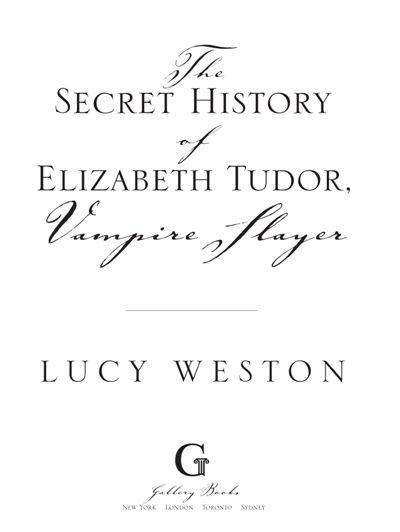 All rights reserved, including the right to reproduce this book or portions thereof in any form whatsoever. For information address Gallery Books Subsidiary Rights Department, 1230 Avenue of the Americas, New York, NY 10020.

GALLERY BOOKS and colophon are trademarks of Simon & Schuster, Inc.

My deepest appreciation to all those who have steadfastly assisted me in my efforts to bring
The Secret History of Elizabeth Tudor, Vampire Slayer
to the attention of the public. A sensible regard for their safety prevents me from thanking each by name but I trust that they know who they are. I also wish to thank Mister Bram Stoker—posthumously, of course—for setting me on a path that, though not of my own choosing, is at last of my own making.

In the moonlight, the scaffold appears to be made of bleached bones from one of the leviathans that wash up on our shores from time to time to general alarm, for what godly world encompasses such creatures? The platform is raised high above the crowd of gray shadows gathered around its base. A woman climbs slowly, carrying the weight of her anguish and fear. She holds her hands clutched in front of her, as though in prayer. Stepping out onto the platform, she steps into the beast’s gaping maw and is devoured.

Sometimes the woman in my vision is my mother; other times she is I.

For most of my youth, I have expected to die on that spectral scaffold, sacrificed to the same great beast that took my mother. That I have not met such a fate by this, my twenty-fifth year, is no doubt due to the mercy of Almighty God, although Doctor Dee credits my survival to the alignment of the stars at the moment of my birth, which suggests that my life rests on a cosmic whim.

However I came to be, I am not male. For that sin—whether hers or mine—Anne Boleyn died. My mother went to her crowning with me in her belly, through sullen crowds that called her a witch and conjured her death. I have done somewhat better. This day, the gray shadows have spewed into the streets of London, where, imbued with the ruddy cheer of
winter under a chill blue sky, they have hailed me with such vigor that, for a little time, I have let myself bask in the false glow of their approbation. Still I do not forget.

My ladies have no notion of what I see as I sit gazing out onto the Tower Green, seemingly glad to rest in the aftermath of the tumultuous welcome into my capital. They see only the empty, moon-washed lawn agleam with winter frost behind the cheery, reflected glow of the fire that warms my bedchamber. Pretty girls mostly of my own age, they bustle about under the watchful eye of Kat Ashley—my former nurse and as close to a mother as I have ever known—folding my clothes, chatting among themselves, excited for the coming day.

As am I. Truly, I look forward to the moment when the holy oil will touch my brow and breast, and I will be transformed into the anointed of God, chosen by Him to rule over my father’s kingdom. The irony does not escape me. Child of the despised queen whose head had to be cut off to save the king’s manhood, I have Henry’s red hair and his name. Since Mary’s autumn death, I have his throne. Somewhere, I like to think that my mother is laughing.

It is dark but clear, with moon shadows sharpening all the angles of the ancient White Tower—the Conqueror’s pride—which looms over the fortress added onto by so many monarchs down through the centuries. Nothing moves on the river beyond, save for the fast-running tide. Peering through the leaded glass of the royal apartments set snug against the inner curtain wall, I feel a surge of affection for ancient London. I will have to be as a Gypsy rope walker in the years to come to have any hope of balancing between the city’s puffed-up merchants and rapacious barons, its sullen Catholics and fire-breathing Reformers, all amid the babble that rises from its docks and spills over into ever-rancorous Parliament. But I am good at
balancing. I was born with a light step and an instinct for how and when to stretch out my arms to embrace what I need most. Nothing so surely marks me as a changeling, for neither of my parents possessed that skill.

In my bed gown and cap, wrapped in a lace-edged wool shawl against the dampness that penetrates the old stone walls, I am ready to slip into the high, four-poster bed curtained with embroidered silk. I long to stretch out beneath the ermine blanket and dream my queenly dreams.

There is a knock at the door.

My ladies turn as one, rapt. Do they truly believe that my Robin would be so bold as to call on me in my private chambers the night before my coronation? My dearest friend and, so far as I will allow it, my secret lover, he has known from the darkest days when malign men sought to prevent me from ever becoming queen that only the utmost discretion stands between us and disaster. I cannot believe that he would put us both at risk at so crucial a moment.

But then who comes at this, the midnight, hour?

A maid opens the door. Two men stand revealed. Doctor John Dee, just past thirty years of age, is the younger, although he manages nonetheless to convey an impression of great sagacity. I met him for the first time two years ago when Robin brought him to my notice. The scholar and magician rightly called by the honored title of magus had risked his life to counsel me, having barely survived arrest and interrogation at the order of my sister, Mary, who feared him greatly. She had reason to do so, for it was Dee who cast the horoscope that foresaw the time of her death, an act that, had it been discovered, would have sent him to the stake. Armed with that knowledge, I was able to outlast the plotting of my enemies. They browbeat my sister to order my execution, virtually to the moment of her final breath.
In the aftermath of Mary’s demise, Dee determined the most auspicious date for my coronation, now scant hours away.

The magus is tall, possessed of piercing brown eyes, with a pale beard halfway down his chest. Wisdom and gravity adorn him as much as do his scholar’s robes. Beside him, William Cecil looks smaller and of less consequence. That impression is almost comically misleading. Cecil is my closest adviser, the man I call my “Spirit” and whom I trust above all others, who in the dark years of my sister’s reign kept the light of hope alive in me. In his late thirties, already burdened by gout despite his avoidance of all excess, he is as virtuous in his private life as he is ruthless in matters of state. Both qualities make him invaluable to me.

In The Prince's Bed by Sabrina Jeffries
Conna in Crisis & The Marriage of Ulick by James Kilcullen
Kill Kill Faster Faster by Joel Rose
Holding You by Kelly Elliott
20 x 3 by Steve Boutcher
The Night Before Christian by Avery, Joy
o 35b0a02a46796a4f by deba schrott
Life Drawing for Beginners by Roisin Meaney
In the Moons of Borea by Brian Lumley
Of Poseidon by Anna Banks
Our partner